Hello, and welcome back to another Dev Diary for the upcoming By Blood Alone DLC and accompanying Patch 1.12! The team has returned from the summer vacation, and we are now back fixing bugs and tweaking the balancing of the new features and focus trees.

Today, we are taking a look at the Plane Designer. As always, any number value that you are going to see in this DD is subject to change.

The Plane Designer became a subject of discussion, both inside the team and in the community, almost as soon as we announced that No Step Back would feature a Tank Designer. We felt that it would mesh well with the rework of the Italian focus tree, not least because the Italian aviation industry was very well developed and produced some of the best combat airplanes of the war - hampered mostly, as Italy so often was, by lacking production capacity.

We also felt that a Plane Designer would help plug some gaps in the lineup of available aircraft. Over the years, many players have commented on the fact that many nations modified their fighters to also be able to carry bombs, or their tactical bombers to also carry torpedoes. One of the big goals of the Plane Designer was to allow for these types of multi-role aircraft.

The basics of the Plane Designer are probably not a surprise for anyone who is familiar with the Ship or Tank Designers. The base is called an airframe, which roughly corresponds to the hulls and the chassis of the ship and tank designers. The Airframes have a number of module slots, where you can put the modules that give the final design its actual stats. There are three different size classes of airframes: Small, Medium, and Large. Small planes also come in a carrier-capable variant of the airframe.

The types of module slots in the Plane Designer are slightly different from the Tank Designer. There are effectively only three types of slots: Engines, Weapons, and Special modules.

Engine modules are perhaps the most straightforward of them. Unlike tanks, where this slot dictates what type of engine the tank uses and a separate stat determines what its speed is, engine modules in the plane designer determine the number and power of the engines mounted on the aircraft. These engine modules produce a new stat called Thrust, while all other modules have another new stat called Weight. These two stats are effectively the limiting factor of what and how many modules you can put on the plane. A design is only legal if Weight does not exceed Thrust (some people might point out that the only planes with a Thrust/Weight ratio of 1 or better in reality are modern, high-performance fighter jets, but these people will be summarily ignored).

Any excess Thrust is converted into extra speed, which is intended to provide a reason not to fill every module slot.

One thing to note here is that jet engines (and rocket engines, for that matter) are part of these engine slots, which means that they are available for all types of planes. This, by necessity, means that Jet Fighters and other jet-powered airplanes are no longer their own unit type - they are now simply fighters with jet engines. Jet fighters will therefore reinforce regular fighter wings, and also that you can now effectively make jet carrier planes, jet CAS, jet heavy fighters etc.with the plane designer.
​
Or Rocket Naval Bombers, one supposes, if you really hate your pilots on a personal level. 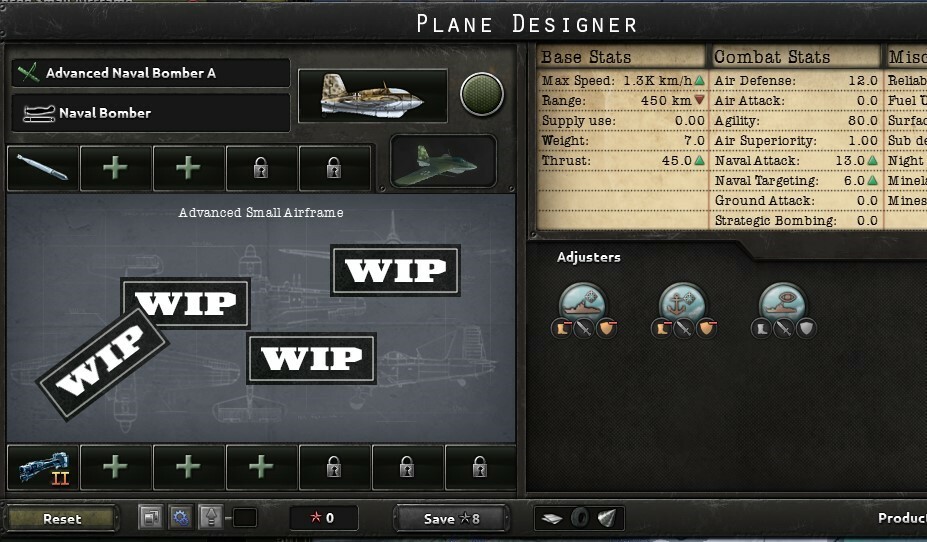 Weapon modules are also fairly self-explanatory. But beyond providing offensive stats like Air Attack, weapon modules fulfill two other major functions. The first is that the weapons define what type of plane a design ends up being. For this the designer has a Primary Weapon Slot. The module in this slot defines the role of the final design, i.e. Fighter, CAS, Naval Bomber etc.

This is relevant because the weapon modules also unlock what missions a design has available. That means that the strict separation of mission by type of aircraft will be gone. You can now create fighters that can provide ground support, or Strategic Bombers that can do naval strikes, depending on the modules you put on the plane. There are, of course, some restrictions - strat bombers can never mount the modules necessary to unlock air superiority missions, for example.

We still wanted to give you an easy way to classify your designs on a high level and it also makes it a lot easier to tell the AI what a design actually is and how it should be used. Without accounting for doctrines, there are no stat differences between, say, a fighter that has a set of 4 Heavy MGs in the Primary Weapon Slot and bombs in a secondary weapon slot, and a CAS that has the bombs in the primary weapon slot and the MGs in the secondary slot - but one goes into Fighter Airwings and the other goes into CAS Airwings.
​
CAS planes have a large variety of weapons available to them to attack ground targets. 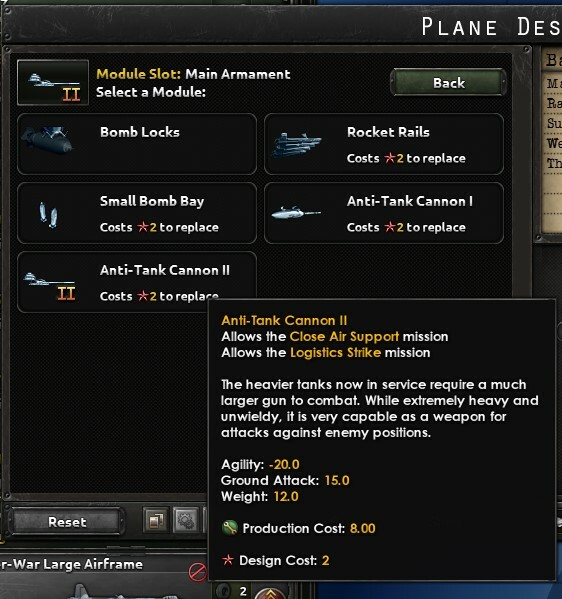 There is a full list of weapons, the missions they unlock, and what they classify a plane as if mounted in the primary weapon slot, below (stats omitted because balancing is still ongoing): 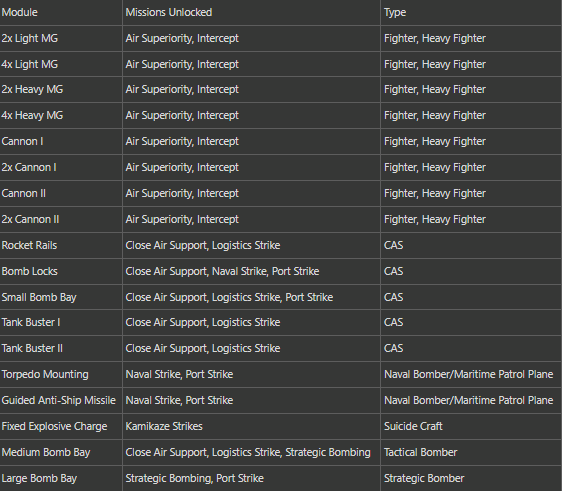 While some of these weapons are unlocked in the (reworked) Air Tech Tree, some of them are also found outside of it, in a similar manner as the tank weapons are found in various trees. I will note that the total number of techs in the Air tech tree has actually decreased.
​
A view of the Air Tech tree. It has a total of 28 techs, compared to the old tree’s 38 techs. 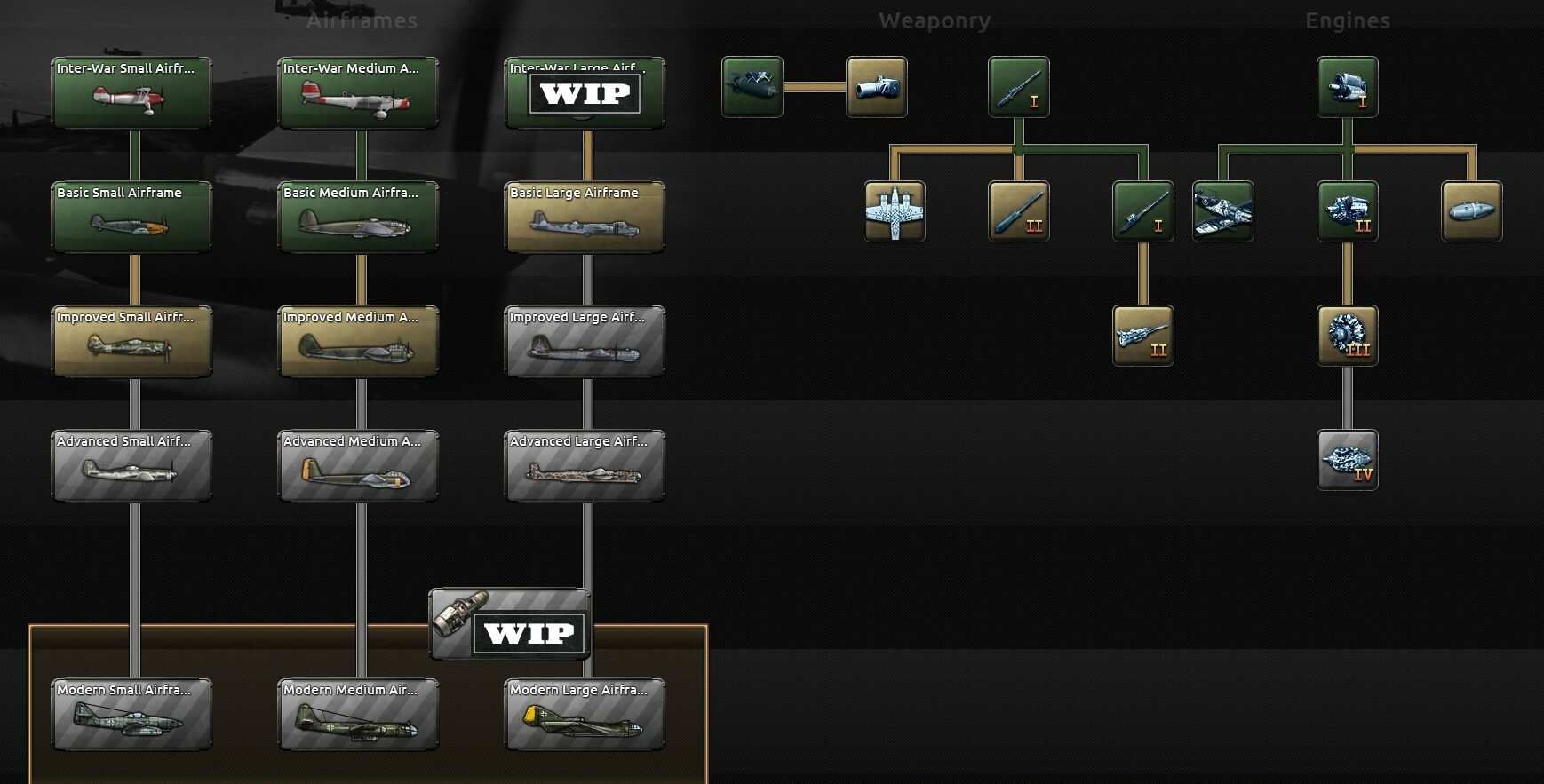 One notable aspect is that a lot of these modules provide different stats only for specific missions. For true multi-role planes to make sense, we wanted to make sure that building a design with a mixed set of missions didn’t make the plane useless in some of them. Hanging bombs off a plane should make it less agile and slower, but a fighter that was able to do CAS missions shouldn’t be useless in air superiority missions. Thus, the weight and agility penalties only apply to the fighter if it is actually on a CAS mission, not if it is on an air superiority mission.

Modifiers only apply to certain missions. Here, the bombs the Stuka carries make it less agile, but the dive brakes give it better air defense 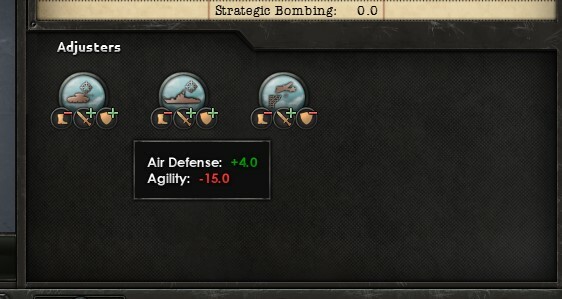 Finally, we have the so-called “Special” module slots. These are effectively a catch-all term of various different items, a list of which you can find below:​

Special Modules are primarily intended to help optimize planes for various missions or give them different niches.

The eagle-eyed amongst you have already spotted that planes now have a surface and sub detection stat. Up until now, planes that were active in a sea zone always provided a flat bonus to the spotting speed of any navies active in the seazone. This will now change, with planes having dedicated spotting stats that determine how well they do with helping the navies spot. There are modules, like the Air-Ground Radar and the Flying Boat hull, which give bonuses to naval spotting.

To further support this, we are adding two more things: Maritime Patrol Planes as a dedicated unit type and a special Naval Patrol mission for planes with the right modules.

Maritime Patrol Planes are built on the Large Airframe, giving them exceptional range. They are able to mount the whole array of naval bomber weapons, but naval strike is really not intended to be their primary role. Maritime Patrol Planes are meant to help with spotting raiders in the deep ocean, where smaller planes with shorter ranges struggle to provide much mission efficiency.
​
You can run naval patrol missions with many different types of planes.

Finally, let’s talk a bit about art! While we already have a large amount of historical art for various plane types, we also wanted to give you more options to visually distinguish your designs, even if it is just to find the plane design more easily in the production menu. For the tank designer, we split up the existing art and recombined it into various combinations to quickly generate a large number of assets. We realized early on that this wouldn’t work for the plane designer. So instead, we decided to fill in some gaps in the existing art as well as add some art for a number of prototypes that flew but were historically passed over for mass-production.
​
Here is a partial list of new plane icons coming in BBA. Which one’s your favorite?

We also decided that we wanted to add more 3d art. Much like the tank designer, you can select these assets when you design the plane. We are adding about 80 new 3d models for planes to the DLC, but more on that in the future!
​
Here is just a teaser of some of the new assets coming in the DLC:

That is about it for this week. We hope that you will enjoy playing with the Plane Designer as much as we enjoyed making it. To end this DevDiary on a personal note: The Plane Designer will be my final contribution to Hearts of Iron 4. After close to 6 years on the project, all the way from the early days on Together for Victory, the time has come for me to leave the company and move on to greener pastures. It has certainly been an eventful and productive couple of years, and there are many things that I am very proud of (and a few that I regret - like adding Austria-Hungary as a joke and then finding out that people love monarchism). Working on the Hearts of Iron series has always been a dream for me, since the day I launched Hearts of Iron 1, almost 20 years ago now. Few people can say that they had an impact on a piece of entertainment that has had a similar impact on themselves. But the thing I am most proud of is the team we have built. Hearts of Iron is in very good hands, and there are years of content still to be released. I’m looking forward to it - but, once again, as a player.​

Weird designs that QA came up with:

This single plane outguns an entire tank platoon, unfortunately it can’t ever turn:

And then we restricted the number of bomb bays you can have on a plane:

6 engines, 8 cannons, 4 cannons in turrets, and a production cost 50% higher than a strategic bomber. Needless to say, this combo is no longer possible: 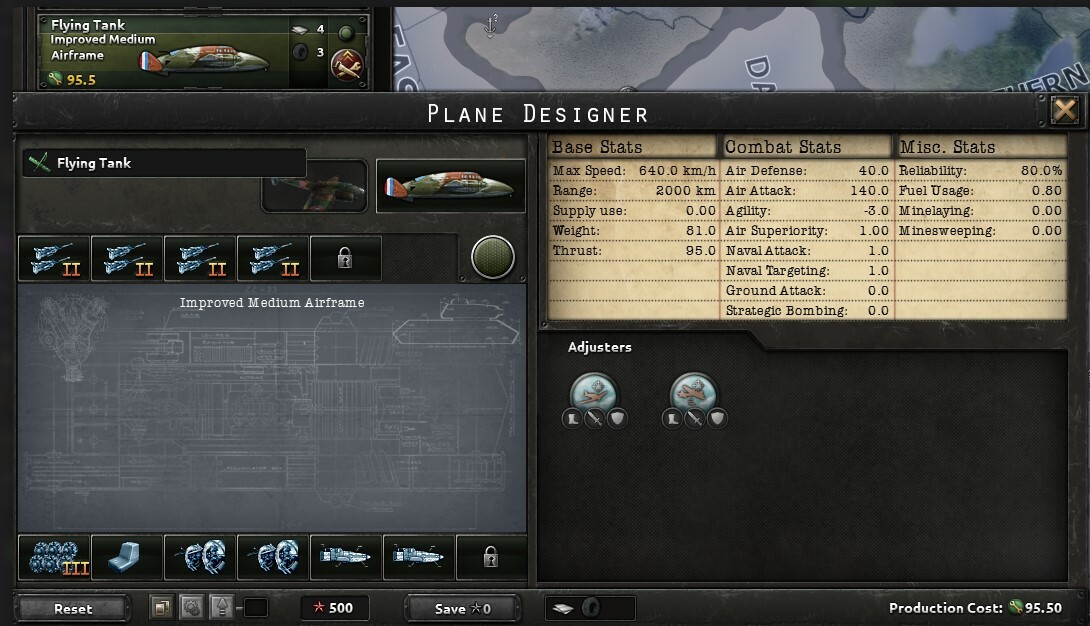 When you look at the Spitfire Mark I’s armament and wonder: but what if…more guns?