Welcome back to today’s feature dev diary on a series of interconnected subsystems being added to the game in By Blood Alone.

One of the major points in my first roadmap dev diary was that I felt quite strongly about the inclusion of further roleplay and immersive elements in Hearts of Iron. What I’ll be showing off today is intended to fulfill a small part of this bullet point.

Those of you with keen memories will recall an early teaser I posted here. Some of you guessed correctly, and in BBA, we’ve introduced a dynamic system for naming battleplans. For many major nations, battleplan names can be provided through a list of locations, resulting in a historical series of operation tags which will be applied when plans are created:​ 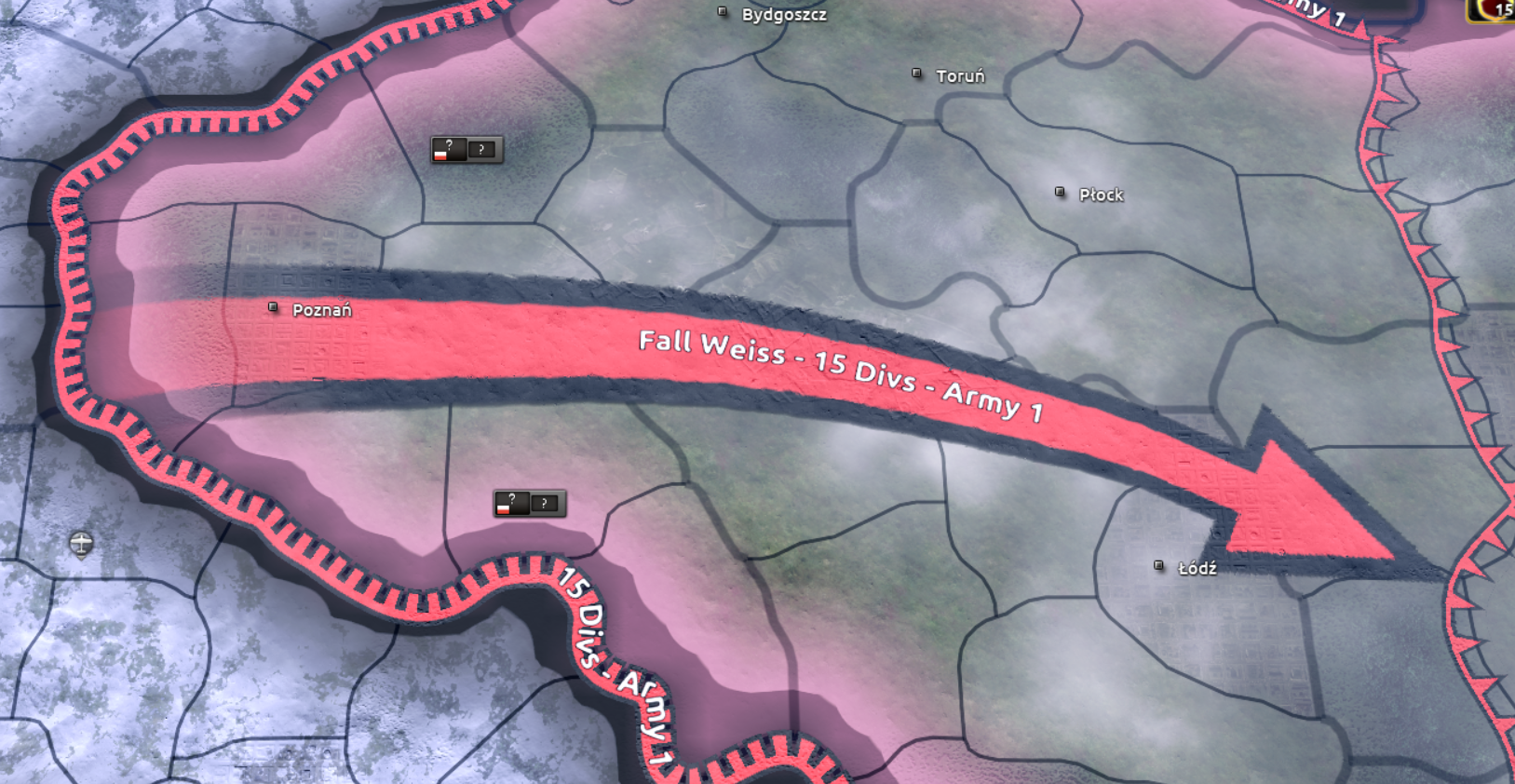 Of course, the war does not always proceed historically, and battleplan names can also be generated from several component lists for instances where a historical variant cannot be found. These name lists are fully moddable, and can be unique to countries. In some cases (ie; Soviet Union) a different naming convention can be utilized to represent the somewhat uninventive approach to naming operations that was used in reality: 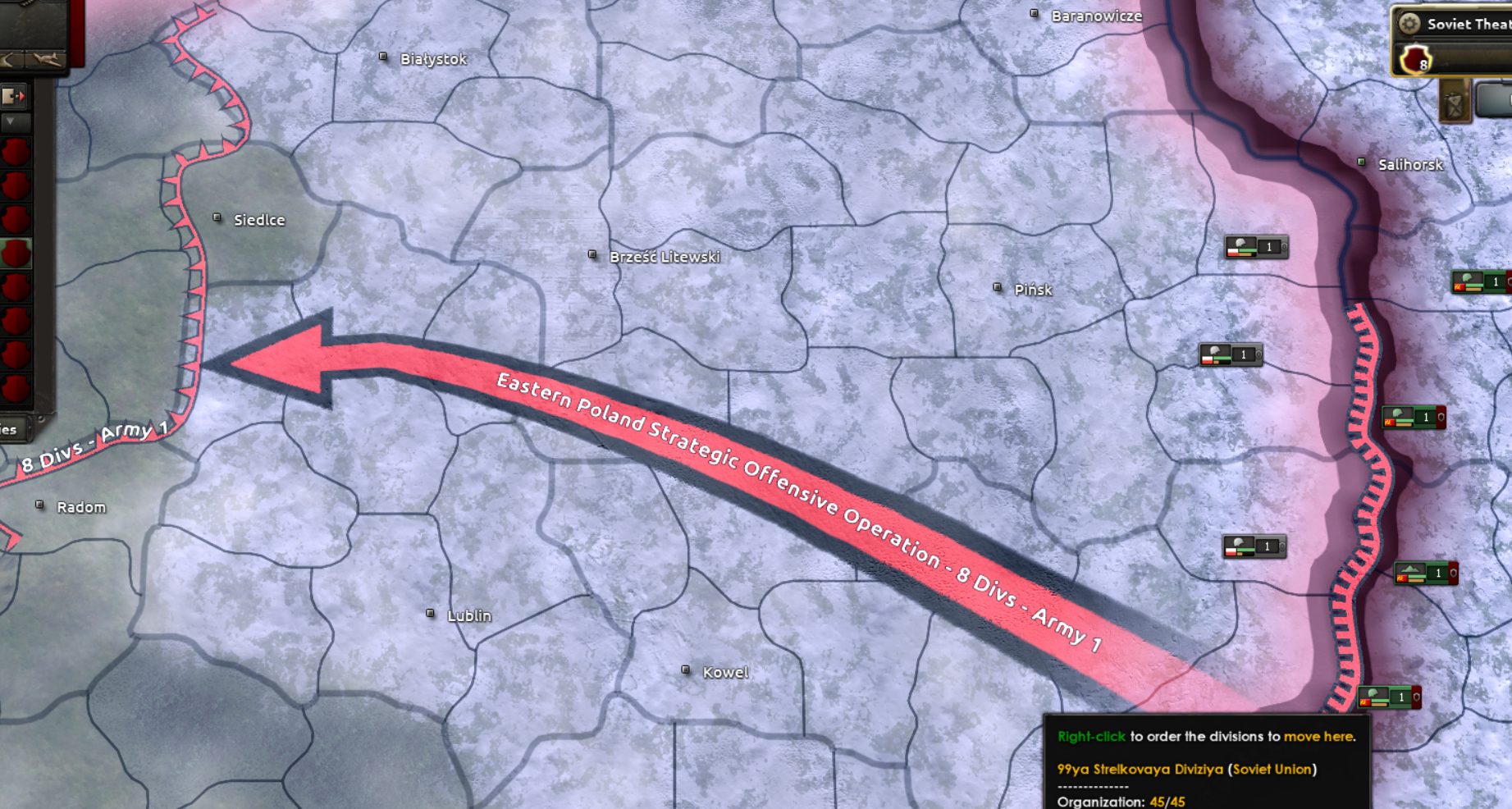 Naturally, in the spirit of roleplaying, these operation names can be modified in-game, and you can replace the text with whatever operation name you desire. This will apply to any sub-orders derived from the initial drawn line: 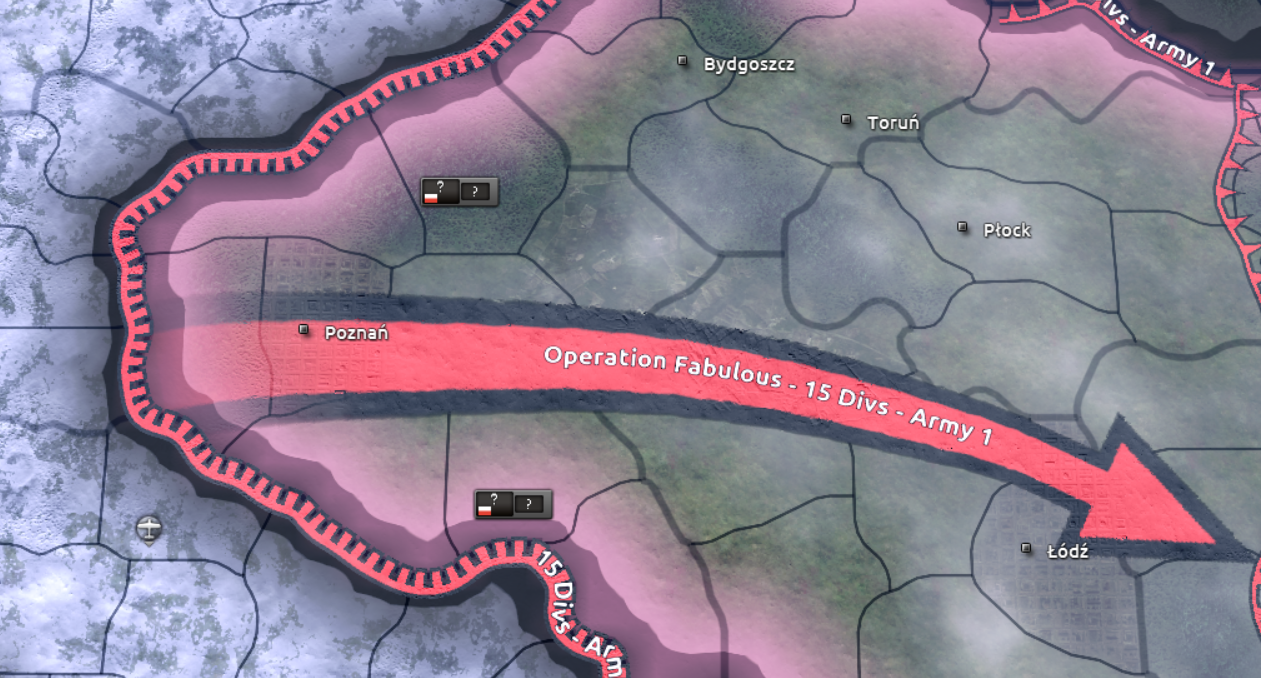 If unset, naval landing and paradrop orders will have a unique pattern to remain unique.

This system however, goes further than a simple naming convention, and ties into another addition being made to BBA.


Division Commanders
In BBA, we’re replacing the standard method of recruiting new generals out of thin air. Instead, every division will be created with a commanding officer upon game start, or when they are trained: 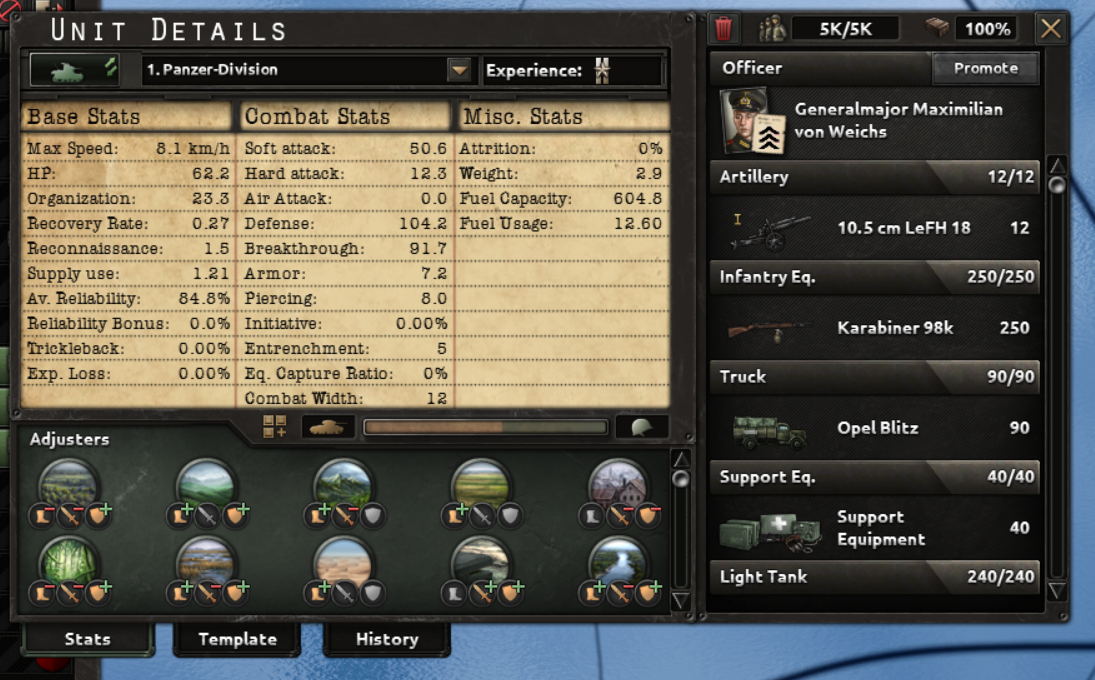 These are predominantly generated from country-specific namelists, however in some cases we have set these individually for starting divisions. When a new unit is created, they will be provided a randomly generated character name and portrait. To accommodate the increased use of generic portraits for these, we’ll be adding a large quantity of additional generic portraits for owners of BBA. The work involved in creating these is not insignificant, so for now we’ve limited ourselves in adding portraits to major nations only.

You’ll be able to get an overview of all division commanders in your army within the officer corps screen: 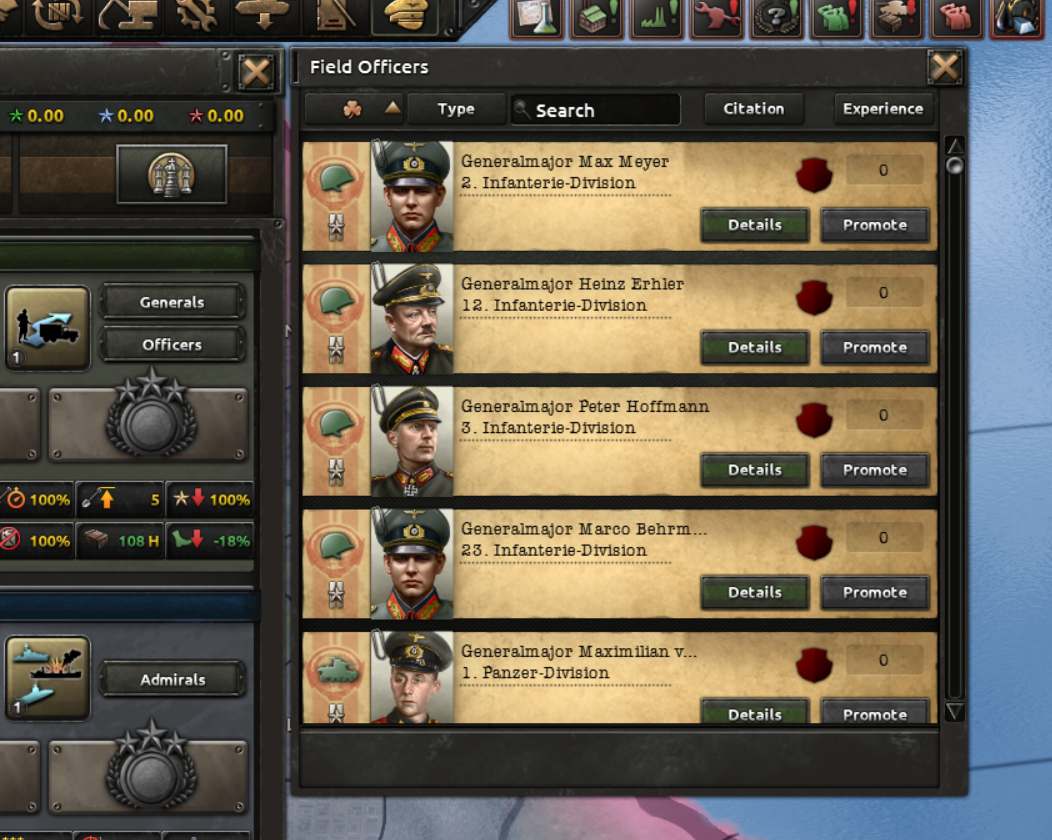 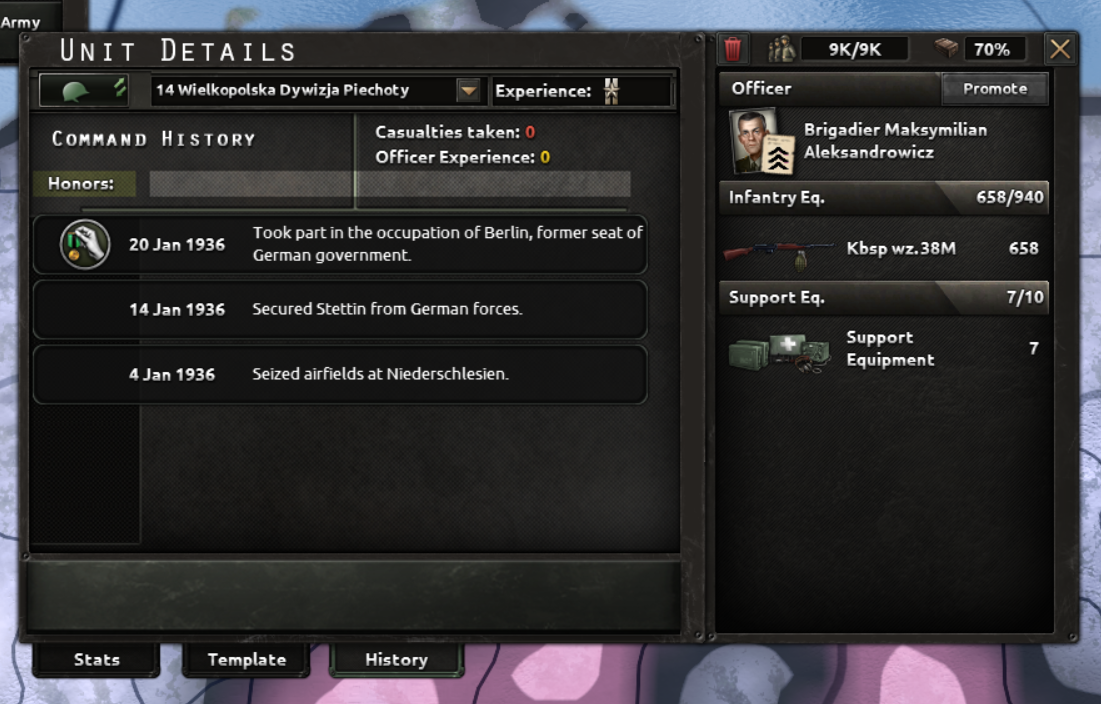 Important actions such as taking a capital, securing a high-value victory point, and more, constitute actions for which a unit can be awarded a medal. It is expected that over the course of a campaign, many units will qualify for receiving medals, often several - the system is not driven by scarcity, as we do not intend for players to micromanage individual actions, rather to manage the macro-level step of choosing when and what to award their units. 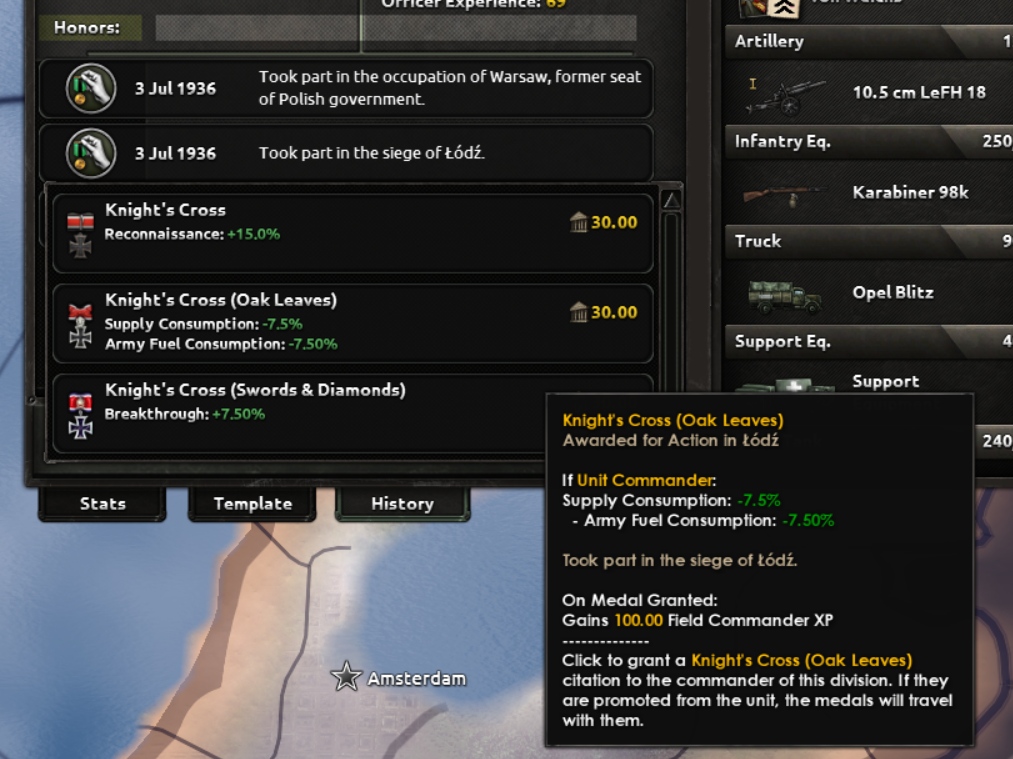 As mentioned above, division commanders will not explicitly confer bonuses, however the medals awarded for action will. Medals are intended to act as a pp sink for the mid-late game, as we find a lot of players tend to end up with a significant amount of this resource as decisions, advisors and focuses begin to dwindle.

Units can receive multiple medals, however the cost for each will increase as more are granted to any given unit, and the effect of stacking specific medals will decrease per instance of the same effect.

As you will note above, medals can be specific to countries, and we’ve included a series of generic medals based on alignment, as well as unique medal sets for each major country. A medal’s effects will only extend to the unit it belongs to.

A medal’s name and description will in most cases be dynamic depending on what action it was awarded for, and extreme valor while on a specific named operation can also result in receiving a medal for that action.

To further streamline the process of awarding medals, you can perform quick actions to do this through the officers entry in the corps screen:

As mentioned previously, we’re removing the old method of recruiting generals by means of reaching into the void and plucking out a fully qualified officer. This means that your army generals will now be directly linked to your field of divisional officers, and their capability directly linked to their actions in the field.

Divisional officers will store experience based on the experience gain of the unit they are commanding, as well as receiving a lump-sum when a medal is awarded. While active as a divisional officer, this experience will have no meaningful effect, however, when in need of a new army general, you can promote divisional commanders out of their divisional role and directly into their new role as a general.

Any medals awarded to the division will be retained by that division, however, the newly created general will keep a reference to their awarded medals as a means of remembering their accomplishments in the line of duty (albeit with no direct effect on their new army - although we’ve elected to support this behavior for modders should they wish): 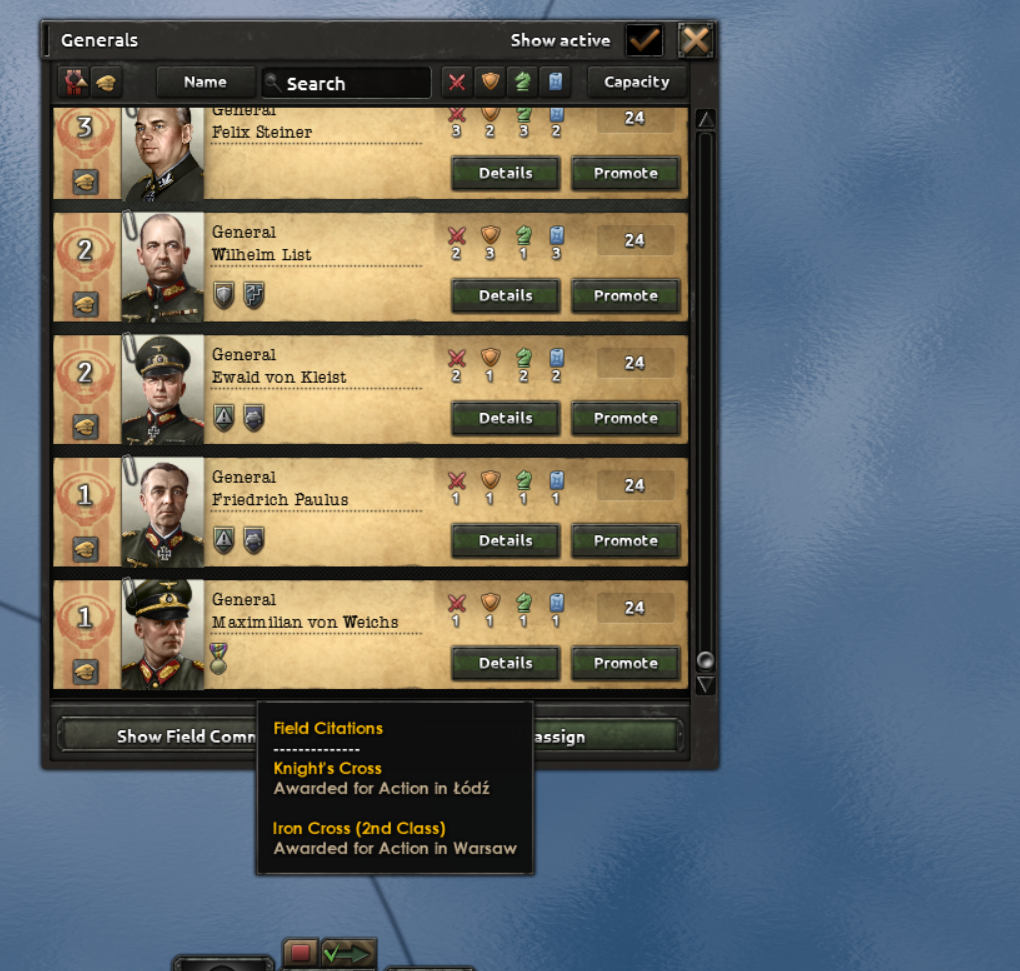 When a divisional officer is promoted this way, the experience they have earned during the course of their field command will be applied to their experience level as a general (up to a maximum cap). Promoting someone with field experience can prove a lot more valuable than hiring another pen-pusher, after all. If they have earned at least a certain quantity (as yet undecided) of field experience, they will also begin with a personality trait corresponding to the type of division they were commanding (armor officer, infantry officer, etc).


Unit Cohesion
You will also note that my roadmap included a wish to improve the battle-planner. While this is likely to be a slow, iterative process, BBA heralds the inclusion of a new frontline parameter intended for advanced users. 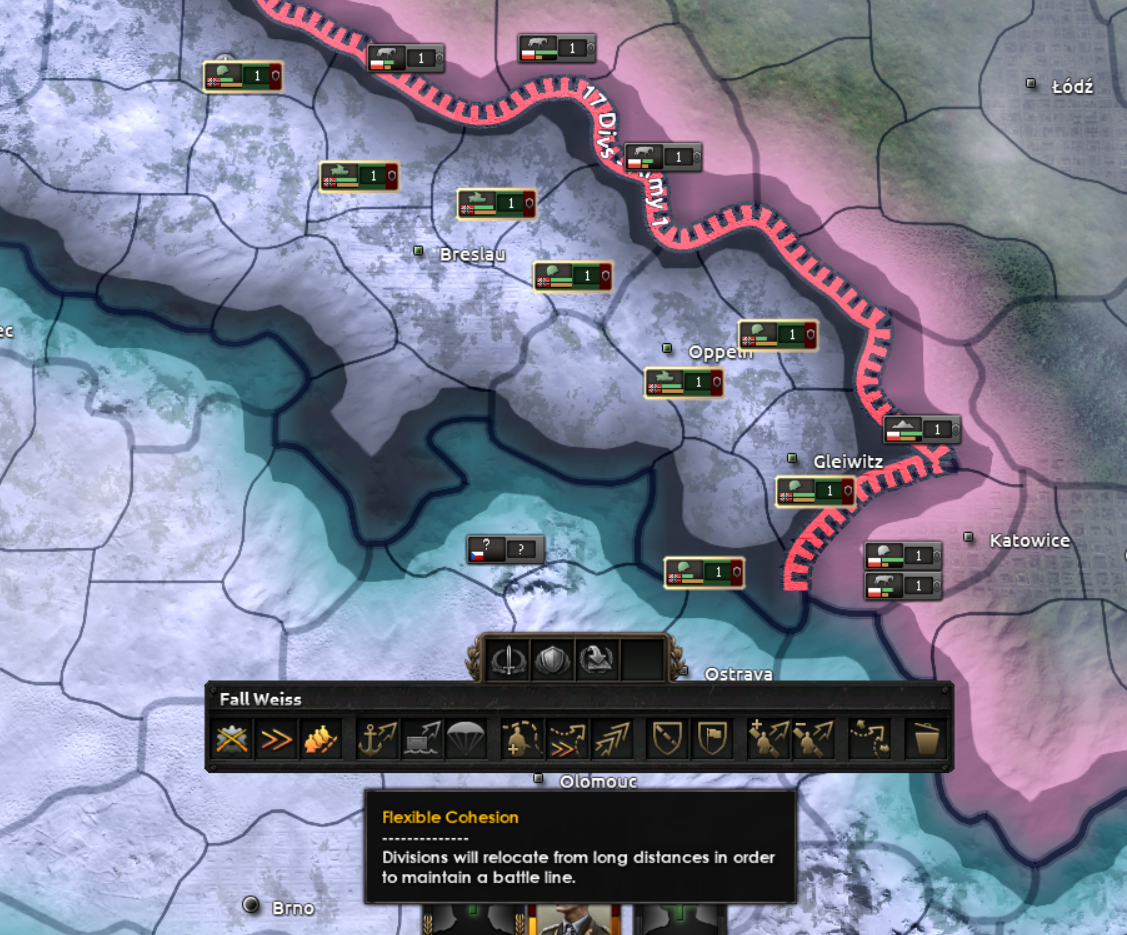 The Cohesion parameter can be set on any root frontline order, and will affect how the unit controller places divisions across that frontline. The default setting of ‘Flexible Cohesion’ functions as you have grown to expect - all units will be evaluated for placement suitability and potentially relocated to fill perceived gaps in frontline cohesion.

Balanced Cohesion’ will only successfully evaluate units that are within a defined distance from the target (distances are moddable). In practice, this results in less unit shuffling along frontlines, but should still ensure that frontlines respond to changes in size and shape.

The final setting, ‘Rigid Cohesion’ is intended primarily for long defensive lines, and will only successfully evaluate unit positions that are within a very short distance from the target location. In practice this results in relocations only taking place to neighboring provinces, and can result in gaps being created in frontlines if left unattended. It is expected that this setting will be used by players who primarily rely on micromanagement of frontlines.

The AI will make use of flexible and balanced cohesion settings depending on the ratio of divisions:frontline length, but will avoid the use of rigid cohesion.

It is worth noting that units that are not placed directly on the frontline (having been left behind or recently added to an order instance) will not be subject to the same cohesion restrictions, and will make use of strategic relocation to find themselves a new place on the frontline. Additionally, the cohesion setting will be respected regardless of whether an order is being executed or not.


Modding
For those of you interested in modding, the addition of these subsystems also comes with some new tools regarding units. It is now possible to iterate over unit arrays in states and countries by condition, and apply a series of effects, including the awarding of medals, history entries, and other basic parameters such as affecting org, strength, and more. For performance reasons, units do not currently support storing or being stored as variables, though we will monitor the need for, and performance implications of doing this in future (I SEE YOU EaW).

Predefined divisions can be set up with lists of historical commanders that they will draw from when their current commander if replaced, should you wish to opt for extreme historical fidelity.

The visual display ranks of divisional commanders correspond to their gained experience, and are fully customizable, though confer no gameplay effect.

Medals themselves can be added to the medal array based on arbitrary conditions, and support a variety of modifiers, not all of which are represented in our vanilla use-cases.


Name combinations can also be split from various random lists, if you have a particular penchant for randomly generated names.

That’s all for now, tune in next week for a second look at how peace conferences are progressing!