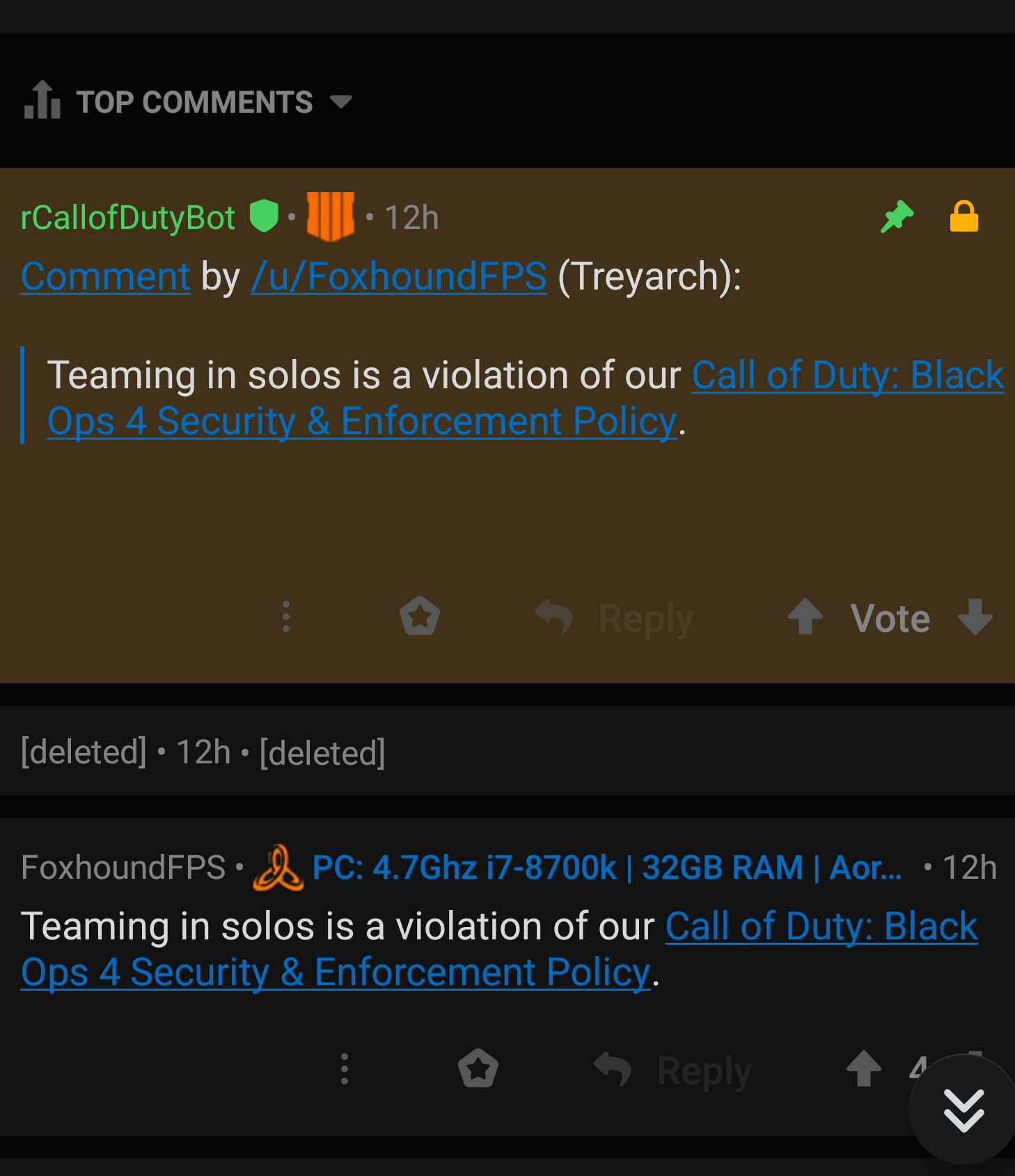 Same here, I've clipped the same guy teaming twice and uploaded it to Reddit. One was a month ago, and the other was a few days ago. He's still playing the game. But it is against the rules so I don't know what's going on.

Generally speaking, a report submitted to our team is not an instantaneous "this person will now be banned" transaction. I hand the report off to our team and they perform a routine inspection to verify allegations and then enforce per our code of conduct.

I've dropped a note that you've made repeat reports on a particular player, but that's the extent of the information I can share with you about this.

Ultimately, the goal of a report is to investigate and verify. The process is not often instantaneous and investigations can take time. The goal is to get it right.

Dropping in to say that some of the hypothetical conversations about what constitutes teaming in our game and others are exactly why we investigate per our Call of Duty: Black Ops 4 Security & Enforcement Policy.

The goal of investigations is to make the right call in every scenario. Sometimes this aligns with community perceptions and sometimes it will not. We take this seriously and we want you to have a fun experience.

I understand that reports can not be dealt with within a few days, due to many reports coming in, as well as ensuring that if you are to ban someone, or reset their stats, that you get it right. Personally, as a player who plays Blackout every day, and loves the game mode, especially Solos, I'm just looking to have the fun that I use to have before these people started ruining the experience for me and many others. Most days there are instances of people teaming in Solos in Australia. My motivation and impatience only comes from wanting to have fun on the game. It may come across as being annoying and angry, but it's coming from a good place.

I appreciate this kind of follow-up more than you imagine and more than understand that passion for something can result in impatience and, at times, heated engagements. You've been great though and this opportunity to explain has been positive. Thank you a bunch.

3 days ago - /u/FoxhoundFPS
Get Discord notifications

Call of Duty: Black Ops 4 Security & Enforcement Policy
All texts are automated, subject to Activision’s SMS terms, and consent is optional, not a condition of purchase or use of Activision support or service. Message and Data Rates may apply. By clicking SUBMIT, you agree to the SMS terms and agree that Activision may send you text messages at the above number about your customer service request. By checking the box, you also agree that Activision may send you promotional texts at the above number.