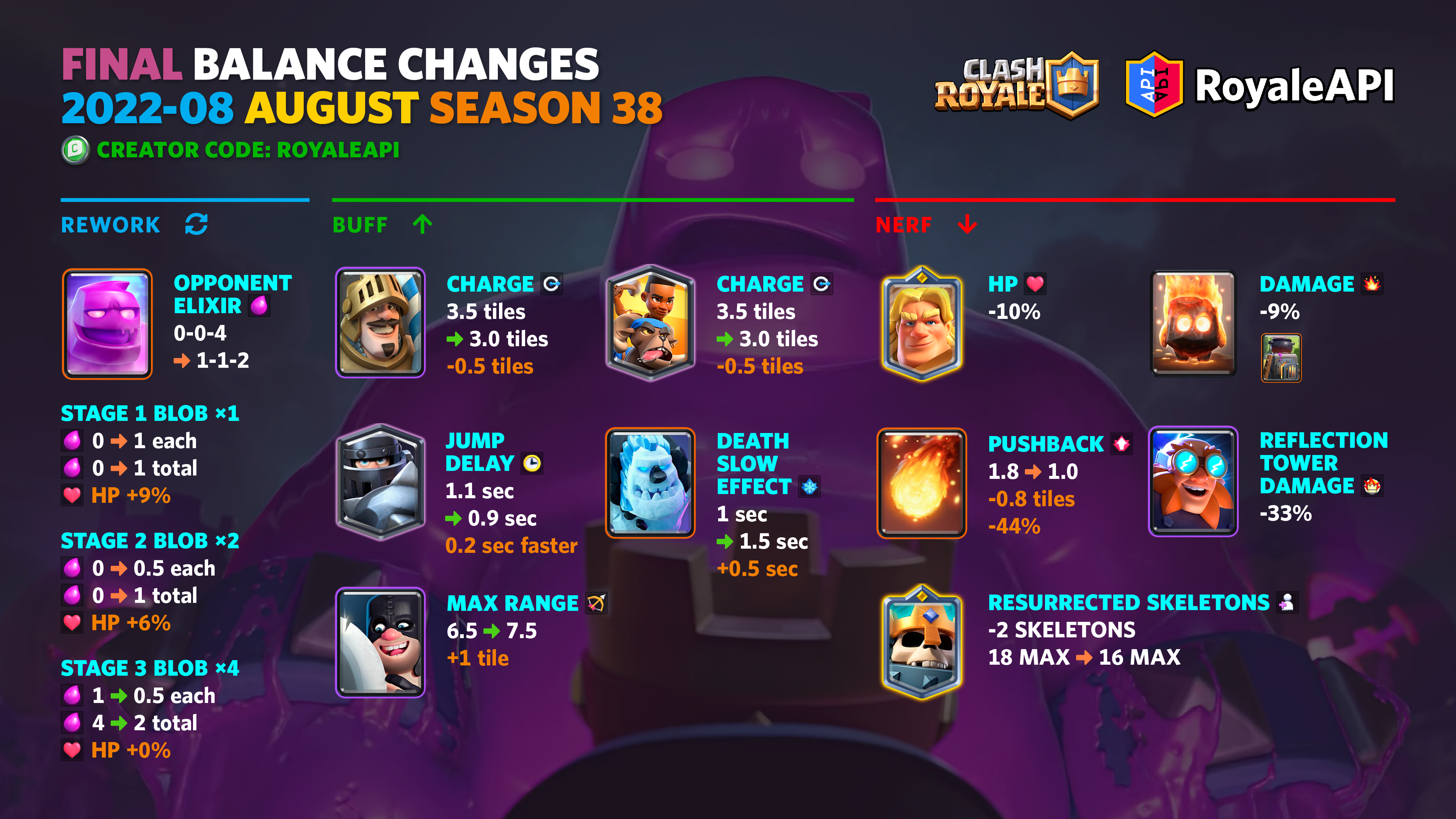 After reading all your comments, I thought that more explanation would be helpful as to why the final balance changes are pretty much the same as the WIP ones.

First, if you haven't already, I invite you to read the RoyaleAPI article, which provides some information about the changes and also why we haven't touched Mirror, Mortar, and Goblin Drill (and also something about Champions).

Like the Log in June, this change prompted a lot of pushback (pun intended) in the Community. The crown tower damage nerf to the Log had little impact on his popularity, so when we discussed the community feedback about the Fireball, we decided to go through with our first idea, keep a significant change, and not repeat the same pattern.

We know a change is needed. The difficulty here is to balance Goblins and Goblin Gang while not making Goblin Drill and Goblin Barrell more powerful than they already are. The current idea (which is not 100% confirmed and still very much WIP) is to create a new Goblin unit that we will be able to balance separately.

"Why (almost) no changes were made to the WIP list? You don't listen to the Community"

While I understand the feeling, we DO listen. After the WIP list was released, your feedback was gathered and extensively discussed with the team. Pro players and content creators were also very vocal. But listening is not the same as doing. Sometimes we must trust our expertise, stick to our guns and bite the bullet on social media.

We usually rely on 4 things when we make balance decisions:

Out of those 4, only data helps to eliminate biases that we all have. However, it’s definitely not the silver bullet and at the end of the day, all balances are a judgment call.

Two things also need to be taken into account:

We have power progression in the game, so each nerf means touching someone’s time and/or money they’ve put in the game. Of course, nerfs still have to happen, otherwise, all stats inflate over time. But we need to keep this in mind.

Casual players have different play styles and meta in their trophy levels. They don’t play Grand Challenges and don’t want to go too deep into card interactions. They just wanna have fun. That’s why cards with more straightforward value (Hog Rider, Mega Knight, Wizard, etc) dominates over there. We need to respect that when balancing too.

For example, the Mega Knight nerf last April was mostly for casual players rather than for competitive ones.

All and all, I do think that sharing the Balance Changes in advance is a good thing because it generates more healthy discussions and feedback, which are very valuable to us. But unfortunately, this time, it meant declining most suggestions.

Thanks for reading me!