Over the last few years, we’ve been expanding on buildcrafting options within Destiny 2. We want players to find fun and unique ways to embrace any given flavor of combat while expressing themselves through the power of their Guardians. The current buildcrafting system relies heavily on a mod library that has grown to be highly complex and, at times, confusing. So, we are making some changes to improve it as well as other aspects of how you build your dream monster-killing machine.

Today, we're going to share some more details on the upcoming in-game Loadouts and Mod Customization features and how we are evolving the buildcrafting experience as a whole.

Being able to save your loadouts and easily switch between them in game has been a long-requested feature and is arriving with Lightfall next month! We’re taking the power of quickly switching between carefully crafted builds and make it available in-game.

Here are some problems the team wanted to solve: 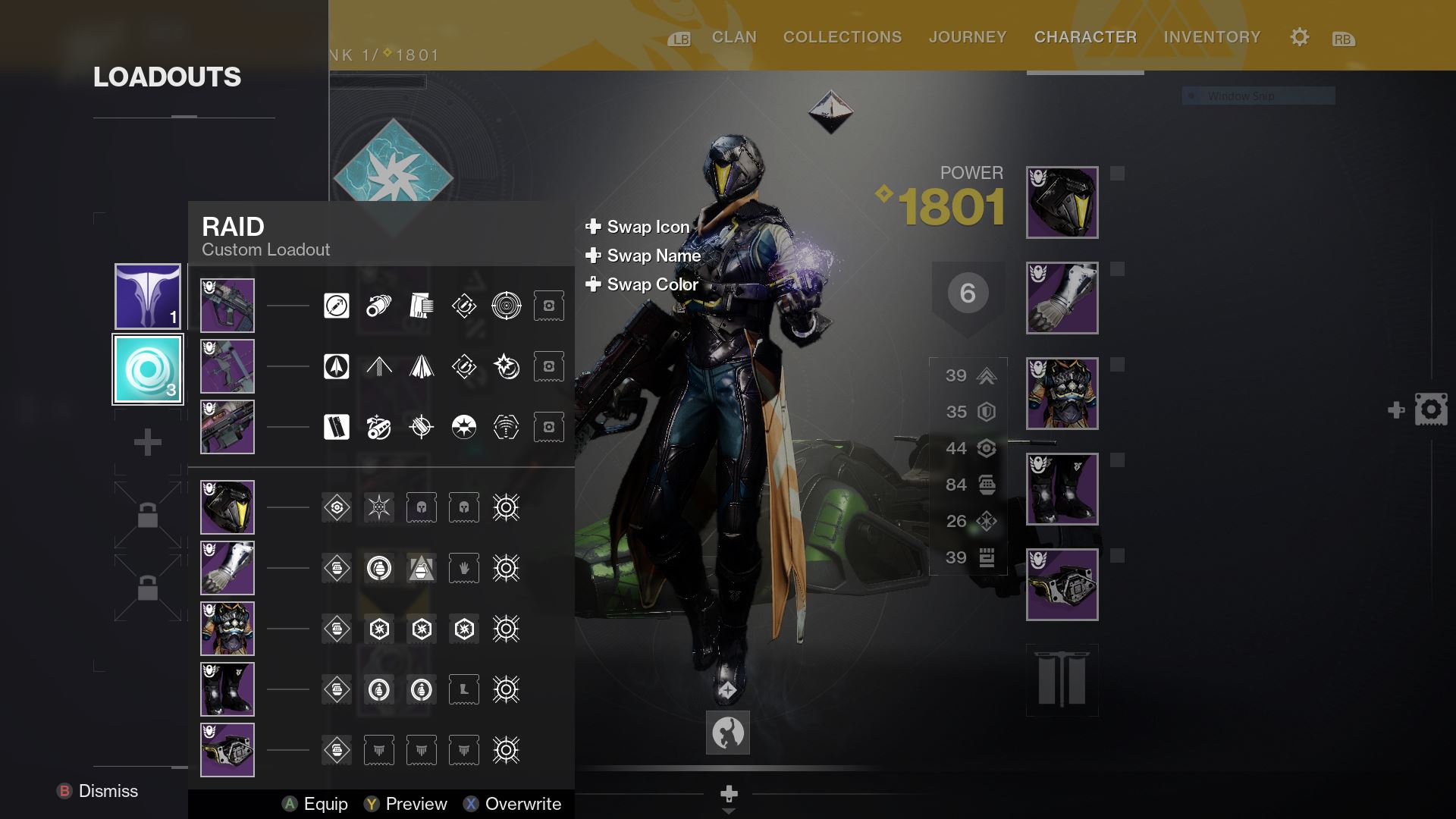 Here you can see a Warlock with three loadouts created of the six slots they have unlocked. You will be able to unlock all ten slots by progressing through the new . Each loadout label has an assortment of colors and icons to choose from including Crucible, raids, Trials, Gambit, damage types, and more. 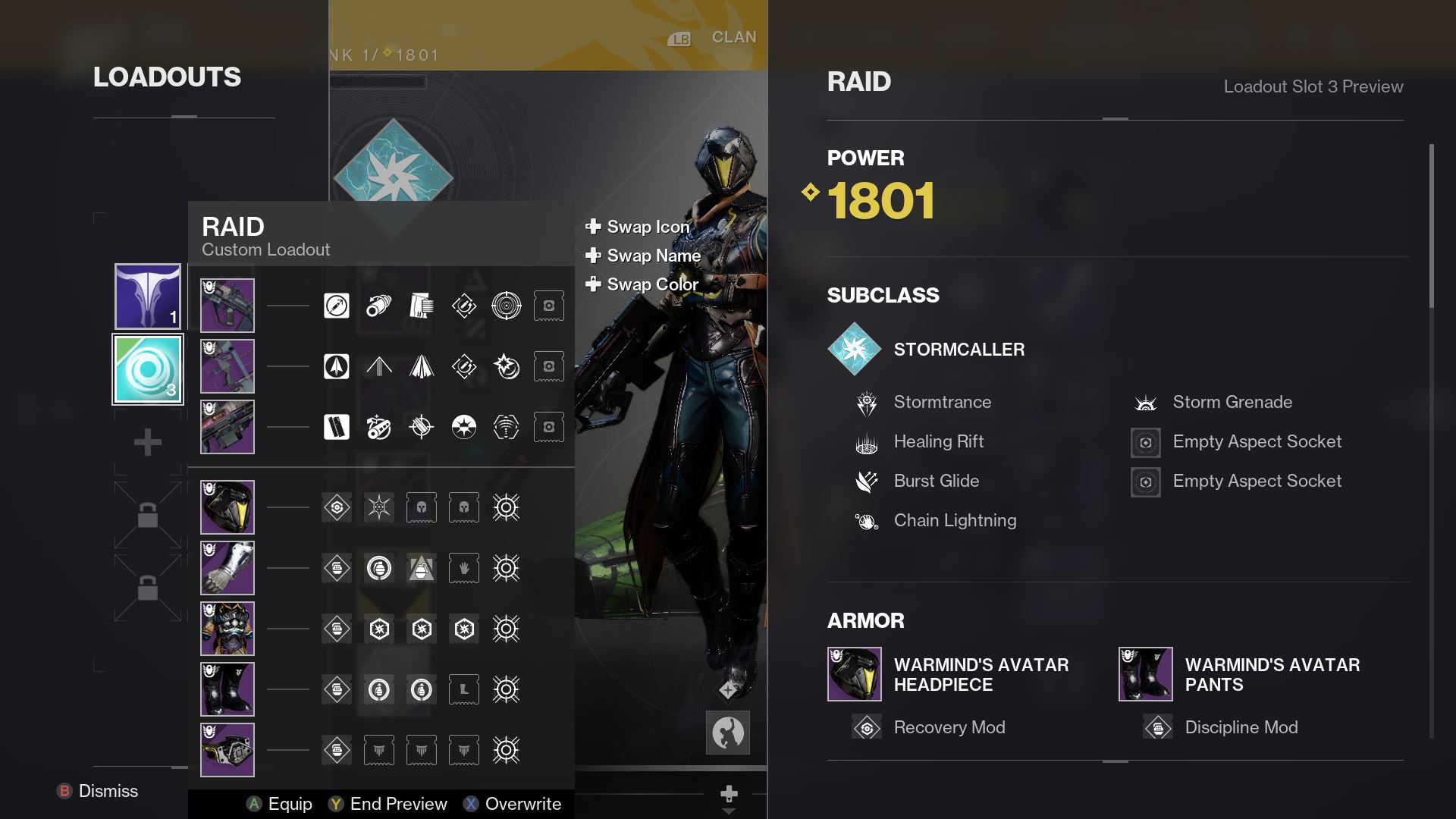 When Lightfall goes live, it’ll be a new ballgame of sorts. Things will be different, and you will have a blank slate to start cooking up new builds for future adventures. Not all current builds in Destiny 2 will be possible upon launch, but there will be a healthy offering to start with. We’re also planning to expand upon buildcrafting options Season over Season.

Problems the team wanted to solve: 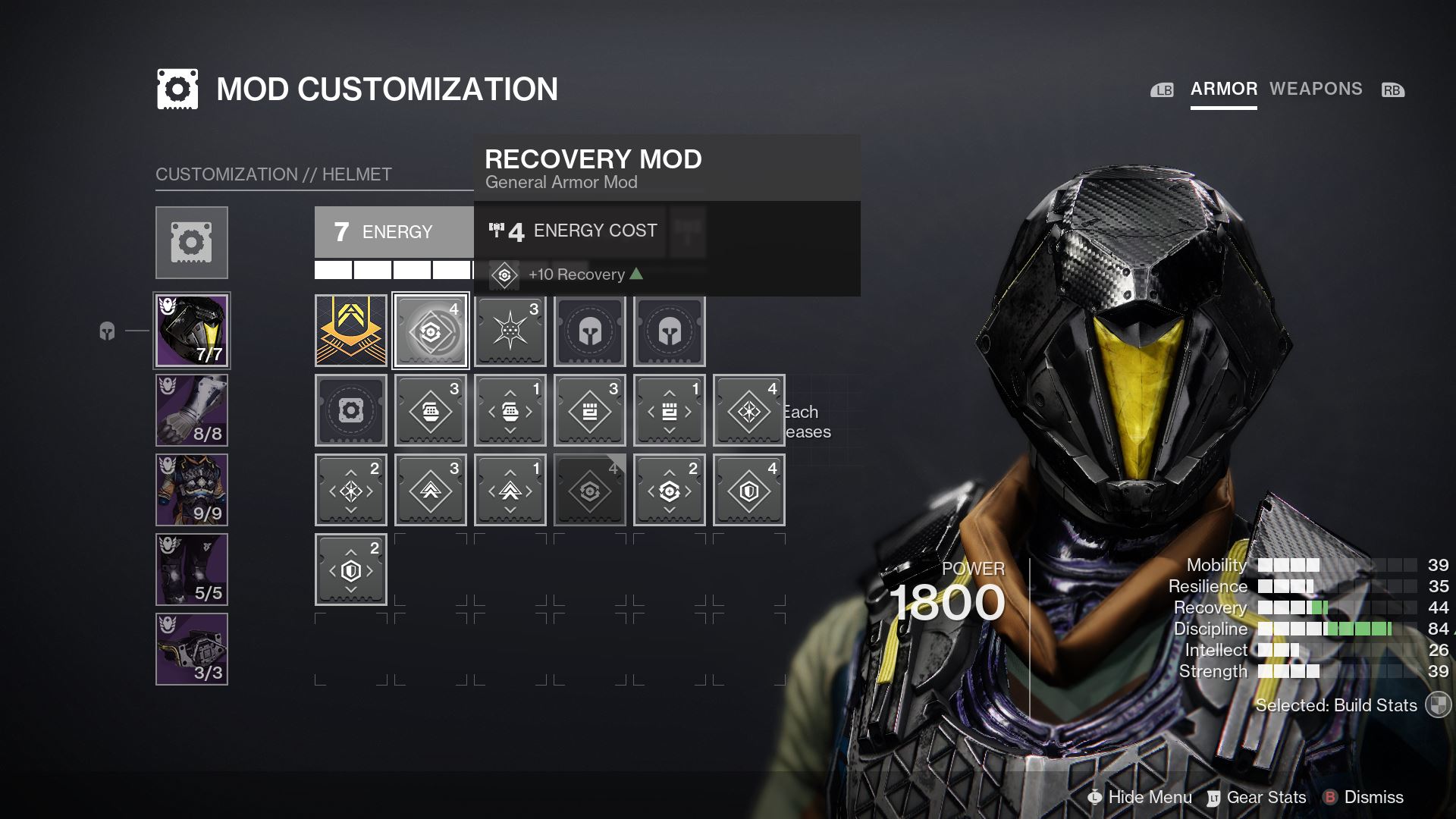 Our new Mod Customization screen is going to make creating your builds much easier, as you will be able to see all of your currently applied mods and how they are affecting your stats on one screen. From here, you can quickly select different pieces of gear to start tinkering. 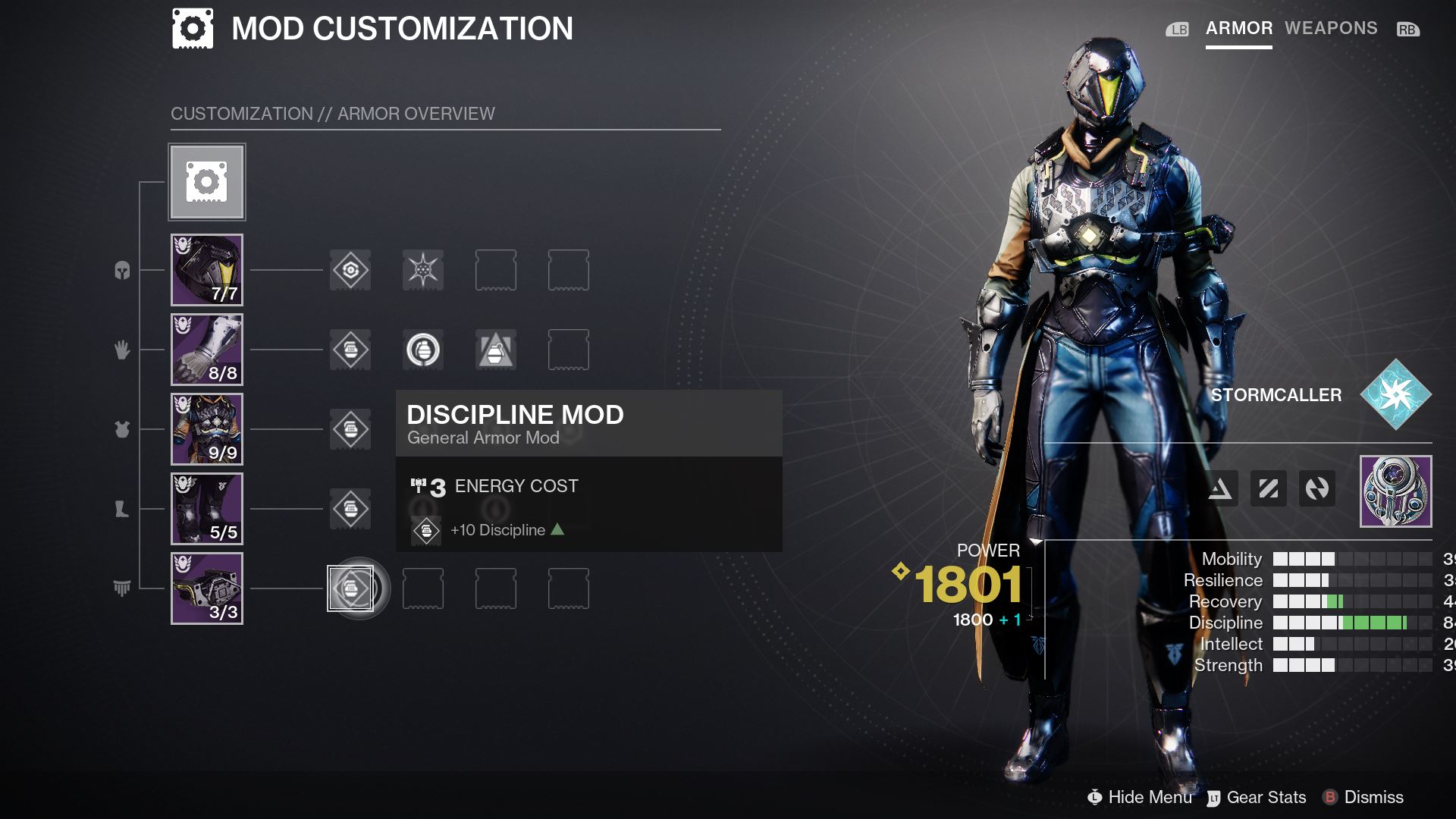 There is also a tab at the top of the screen so you can switch over to see what perks and stats your current weapons have without having to switch back to your Character screen. 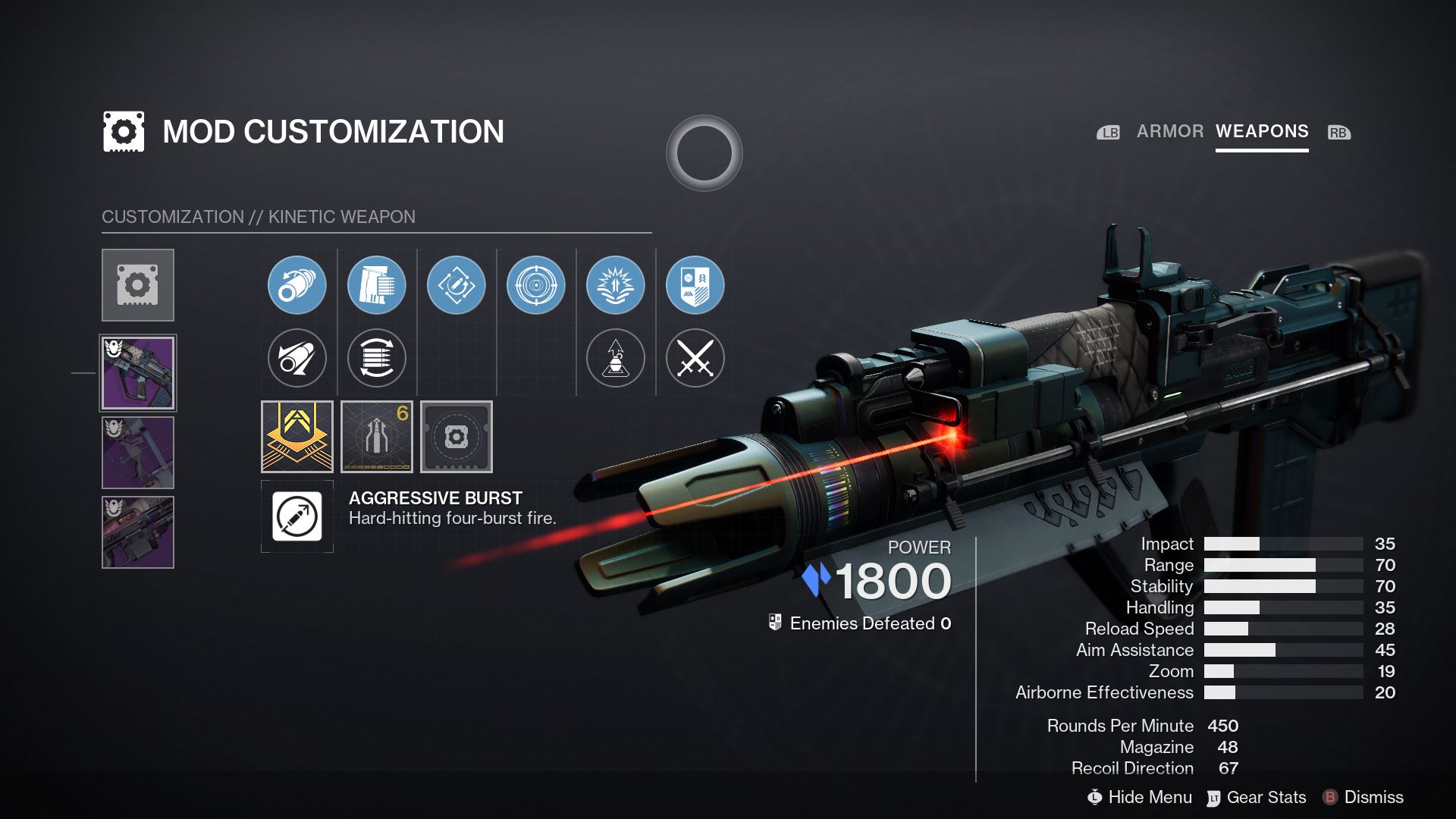 Let’s talk about earning mods. Historically, mods were unlocked in a variety of ways but for the most part you were waiting on Ada-1 to have them in stock. We wanted to remove this waiting game and make all mods have a clear unlock path.

All mods will be unlocked by achieving Guardian Rank 6. Most players who have spent some time in the game will start out at rank 6 and instantly have all mods ready to go out of the gate. New players will unlock mods as they climb through the ranks. Look out for more info on Guardian Ranks soon!

Mod Energy types are being removed, eliminating the need for four different versions of a given armor piece for buildcrafting purposes. We’re also converting the Combat Style socket into an additional mod socket for that armor slot (helmet, gauntlets, etc.). We are also reducing the energy cost of many of those mods, helping give you more opportunities to mix and match.

Additionally, armor mods that previously provided benefits to weapons based on their archetype (for example, Hand Cannon Loader) will now instead provide benefits to weapons based on their damage type. This levels the playing field for all weapon archetypes and should make it easier to put together a powerful suite of mods to benefit multiple weapons in your loadout sharing a damage type.

But that’s not all. Artifact mods are also being translated to unlockable perks. They will no longer need to be socketed, but rather unlock for the duration of the Season once earned and are passively applied to your loadout.

So what does that mean, exactly? Let's say the anti-barrier weapon of the Season is Pulse Rifles. This change means that you’ll no longer need to equip a mod for this, taking up precious space and energy. All your Pulse Rifles (unless they have an intrinsic Champion mod) will automatically have anti-barrier applied. As you can imagine, having every single Artifact mod active at the same time would be a little OP! Because of that, you won’t be able to unlock them all at the same time and will have to choose which 12 perks you have active at any given time. However, we do want to make it as easy as possible to change up your builds so resetting the Artifact will not cost anything.

What does this mean for Artifice armor’s extra Artifact mod slot? Starting in Lightfall, Artifice armor will have a new unique mod slot that grants three additional points to your character stats like strength, agility, intellect, etc. This will help you round out your stats as you perfect your builds.

Once you’ve gotten your loadout set and your mods managed, it’s time to dive in. We’re making some gameplay updates to complement the above changes.

One thing that has always played a huge part in how you set up your builds is Match Game. It’s been pretty much a requirement that you diversify your damage types or end up facing shields that feel hopeless to break. We want to remove this restriction and allow more freedom with how you create your builds to take advantage of new element-specific mods.

To reach that goal, Match Game is being removed from high-difficulty activities and we are making a few tweaks to how you can do damage to different types of shields. Base shield resistance to non-matching damage types, across the entire game is being adjusted to 50% (similar to Gambit now) and we will have some other ways for you to do some bonus damage to shields that we will tell you about before launch. This will help you synergize your perks and abilities around a single damage type, rather than diluting them across several different ones.

We are the Champions

Another thing that has a huge impact on your build are Champions. We want to make how you counter Champions more logical. That should also make it easier to learn how to deal with them in the first place. So, while you will still have a selection of anti-Champion Artifact perks available to you based on your current weapon selection, we are also adding some anti-Champion options to your subclasses to complement your weapons.

When using volatile rounds from your weapon it will also pierce the barrier and stun the Champion. When a player is radiant, their attacks pierce Champion’s shields and stun them. Strand will also have a method of piercing barriers.

With the Combat Mod socket going away, many mods that once belonged to the Charged with Light and Elemental Well subfamilies of mods now fall under a revamped system known as Armor Charge and moved to armor slot-specific sockets. The Armor Charge mechanic functions as follows:

While many of the mods that previously created or benefitted from Elemental Wells are being changed to instead focus on Orbs of Power, some aspects of elemental wells aren’t going away entirely. Instead of creating Elemental Wells each subclass will now create damage-type-specific spawned objects:

The ability to spawn these objects will not come from armor mods but from your subclass instead. For example, while the Ember of Tempering Fragment is active for Solar Hunters, it will now create a Firesprite when you defeat an enemy with a Solar weapon.

Picking up any of these objects will grant ability energy or have other effects depending on your subclass build. For example, if you’re running a Solar subclass and you have the new Ember of Mercy Fragment equipped, picking up a Firesprite will grant you the restoration effect. The number of these types of interactions will be limited at launch, but we intend to add to this system moving forward.

While the main goals here were to streamline the buildcrafting experience, we also had to do some tuning while we were under the hood to address some of the power spikes certain build combinations created. As we said previously, we looked at every single mod and some were changed, moved to other slots, transitioned to other abilities, or removed. With the removal of Armor Energy type and the consolidation of mechanics into Armor Charge, some mods became redundant and were removed. Some ability energy gains, stat bonuses, and weapon damage bonuses from mods have been reduced, though we’ve also added some new mods to expand your build possibilities. Not all previous builds are going to be able to be recreated one-to-one, but the system has been changed enough to open up a lot of new possibilities with new mods and ability combinations.

An example of mods that aren’t coming along for the ride are Warmind Cells. These are a relic of a different time and had already been nerfed in the past. They had a good run, but these mods will be deprecated and no longer available starting in Season 20 to make way for new options to consider when crafting your preferred combat style.

We’ve covered a lot and know there are going to be a lot of questions with so many changes on the horizon. We’ll have more to say on this along with a plethora of other exciting changes coming alongside Lightfall’s release next month. With a system like this, the best way to fully understand it is to get your hands on it and start tinkering.

As with everything involved with supporting Destiny 2, this evolution is not an end point. We have plans to continue tuning and improving this system and will be adding new buildcrafting elements to fill power gaps we didn’t have a chance to get to with this release. We’re excited to see what you build with this new toolbox and look forward to seeing all the new builds shared out.

Worth adding something like: "We want to make it more logical which kinds of things you can use to counter champions, making it easier to learn how to deal with them in the first place."

Artifice armor will have a new unique mod slot that grants three additional points to your character stats like strength, agility, intellect, etc

Should this say Mobility, or is this an accidental hint at more changes?

Should be mobility, I'll get it fixed, thanks.

Really looking forward to this.

Some feedback with the Artifact changes. It will be amazing if instead of resetting the entire Artifact, we can just disable and enable along the way.

For example, if I want to switch which Artifact mods I have unlocked in the fourth column. Let me disable one and then enable another instead of having to reset and reselect all 12.

This is good feedback. Not sure what what it would take to change the UI, but we will share with the team.