10 days ago - not_so_gladiator - Direct link
What a launch! And quite some controversy about the new direction.

The last days have been incredibly busy, as you can imagine. While things were mostly stable, we had to split our attention between gameplay improvements and crash fixes, but now that is mostly fixed, and today we had time to prepare the first big iteration patch.

From the various feedback channels we monitor, one of the biggest complaints that is clear is that the schematics system is too prevalent, and that there is no permanent progression.

To address this, we’ve decided to add a way to unlock technology permanently. You will now encounter Rupu shrines in camps on both cradle and canyon: 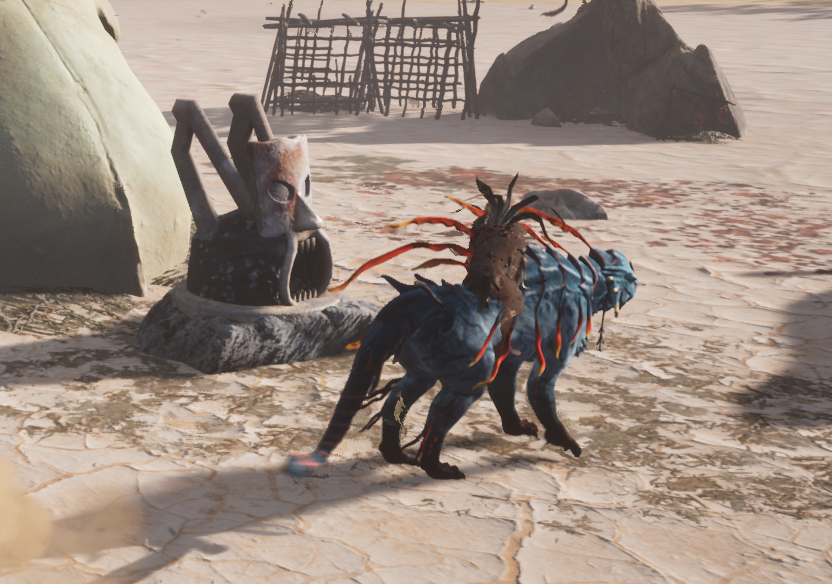 When you find it, you can bring early schematics to the shrines and in return unlock one of the items permanently. You can still use schematics to craft the item, and it will be slightly cheaper if you do both.

The reason we went for the schematic system was to allow us to limit the speed at which large clans (or zergs, if you will) manage to get a permanent advantage over later smaller groups. While they will of course always be faster due to numbers, they used to be exponentially faster due to the tablet system.

It’s clear from the mixed reviews that this approach was considered by many a step backwards. So we figured we can find a solution that achieves both.

This new Rupu Shrine is a test to see if you enjoy this approach better. The list of unlockable tech currently includes all the craftable weapons, tools, ammo, and equipment from the cradle, and if we see positive feedback in response to this iteration, we’ll expand it to include more.

Another big general complaint was about the general slowness of movement and how often stamina and other factors stop players from just, well, enjoying the game. For this, we’ve increased the base stamina recovery significantly and reduced the stamina cost on harvesting.

This goes hand in hand with a buff to all tool durability by 150% (and sickles by 200%). We too feel that tools break too fast, and that too much time is spent crafting the same thing over and over. The reason why it was like that initially was to encourage a very aggressive playstyle where the majority of resources are recovered from fighting PvE camps, rather than harvesting. Clearly this isn’t how everyone wants to play, and we decided to just make things easier here. Some individual tool harvesting rates were also adjusted to drop more resources.

Now, for a tough one: PvE difficulty. There’s quite frankly no ideal solution, some people love the difficulty, others hate it. There’s no easy way to find a balance that does not upset one or the other group. We decided to give the spinner a bit of a nerf to put it more in line with the other remote weapons. We want the fights against camps to be thoughtful and strategic and we think the spinner became the “do-everything” weapon. On the other hand, we noticed that Skirmishers have a habit of sneaking up behind people and hitting them for a significant amount of their HP bar, so we took away their heavy javelin and gave them a light javelin.

Now, for another big one: Grappling hook. We reduced the stamina cost on grappling hook shots from 25 to 5. Grappling hooks is out of those divisive issues we tried to address - in the right hands, it can be a really oppressive tool. But we agree with the most vocal opponents of this change - the grapple hook is insanely fun and we shouldn’t throw the baby out with the bathwater. We hope the small stamina cost will be enough to prevent the most egregious abuses and if not we’ll figure out some other way to address the issue. Back to the trees, Spider-Nomads.

Furthermore, we buffed the HP on Walker bodies - a lot. The rule of thumb we used for now is that the HP of the Walker should exceed the HP of the sum of its parts. A Walker going down in 20 seconds during PVP is of course not intentional. Additionally, we increased the effectiveness of armor against player projectiles - with the exception of scattershot - by about 200%.

We’re not perfectly happy with this solution, of course. It’s rather crude, and we want PVP fights to have more depth than this. But it will allow us to observe more and longer fights and draw conclusions based on that.

These are the biggest changes of this patch - for the complete list, please check the changelog.

As we promised before launch, we will iterate on this until it’s a rock solid, enjoyable survival experience, then move on to release the next map with new content.

We're also working on kickstarting the economy again, working on a solution for the schematics overflow, and it's very likely those things will be intertwined.

Plenty of more good things are on the way.