I know someone's gonna say "its just bot games who cares", but it's every Bot game I get into now where 1 person goes AFK and the match takes longer for the rest of us to play out (also I'm sure it's even more frustrating for genuine newbies to come across this).

The strat is: Pick Akshan -> buy a Dorans Shield -> swing around Wolf Camp for the whole game. They're essentially making other players grind their account for them. The Doran's Shield allows them to stay healthy, and the AFK Detector never detects them, since they're permanently in combat/channeling a spell.

Here's an example of a match I had today. 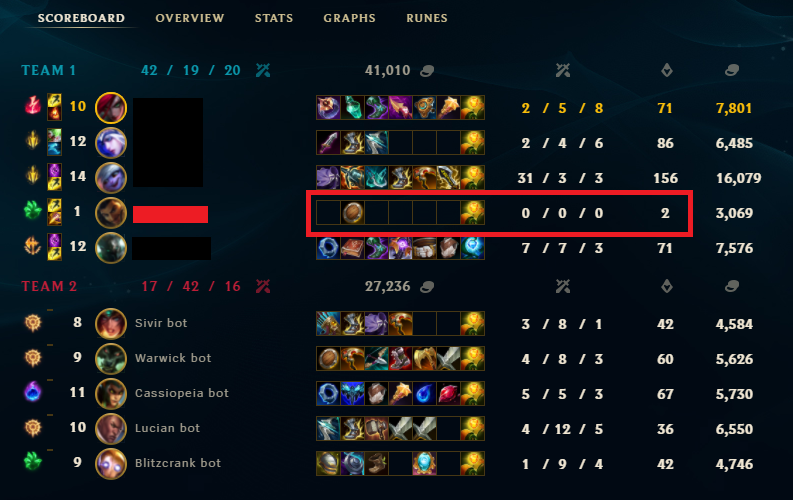 Akshan’s E being “infinite” was a fun novelty while it lasted, but it needs to be changed. This is honestly more annoying than when botted-accounts were playing Soraka, cos at least the Soraka was still following/healing allies. An AFK Akshan does nothing.

EDIT: Some comments have pointed out, there's also the trick where they swing on the rock at enemy's base (typically after buying a Lifesteal item), starving two lanes from getting any gold or XP. For some reason, the Champion Bots never attack them when they're here.

Looking into it today. Thanks for the heads up.

I literally emailed you guys about bots a year ago. Guess what you guys said you’d look into and never fixed? I’ll wait

So the thing about bots is: it’s unlikely to ever be 100% fixed. It’s a constant war between very clever folks trying to circumvent systems and folks building systems to prevent exploits.

I look at the measure of success as more like: how likely are players to experience bots in their games. If the answer is “extremely f*cking unlikely” than we are doing a good job. If it’s “pretty likely” then we need to push harder.

It’s entirely possible that the bots you emailed someone about years ago literally no longer work due to the efforts of our anti-cheat teams. But in that same period, new bots and exploits were developed.

My perspective is that we can do better here, because of course we can always do better here. But I wouldn’t suggest we aren’t doing anything ever. The anti-cheat team is super talented and full of folks working very hard on the problem.

← More from League of Legends