Imagine loading into a game, choosing your hero, and making your way toward the objective. Everything seems to be going fine, but then you round the corner and come face to face with a big, angry, surprisingly Australian Zeus.

We hope you’re prepared to get smote (or is it smitten?) by the Zeus Junker Queen Mythic skin!

The Season 2 Mythic skin comes with customizable variations including different colors, armor pieces, and weapons. Regardless of your loadout, Zeus Junker Queen embodies a super-charged, electrical aesthetic that you see throughout her kit’s visual effects.

We've wrangled some insight from senior VFX artist, Greg Knowlton, about Junker Queen’s journey from sovereign of the scrapyard to ruler of the gods!

Visual effects fit for a Queen

We build our ideas around heroes and consider how they fit into the seasonal theme. “Junker Queen’s kit is based around the magnetism in her gauntlet,” Knowlton continues, “She has a super-charged, electric aesthetic, so we played that up within the Zeus theme.”

“Lightning is very rock and roll, and so is Queen. She fit the Zeus Mythic fantasy perfectly.” 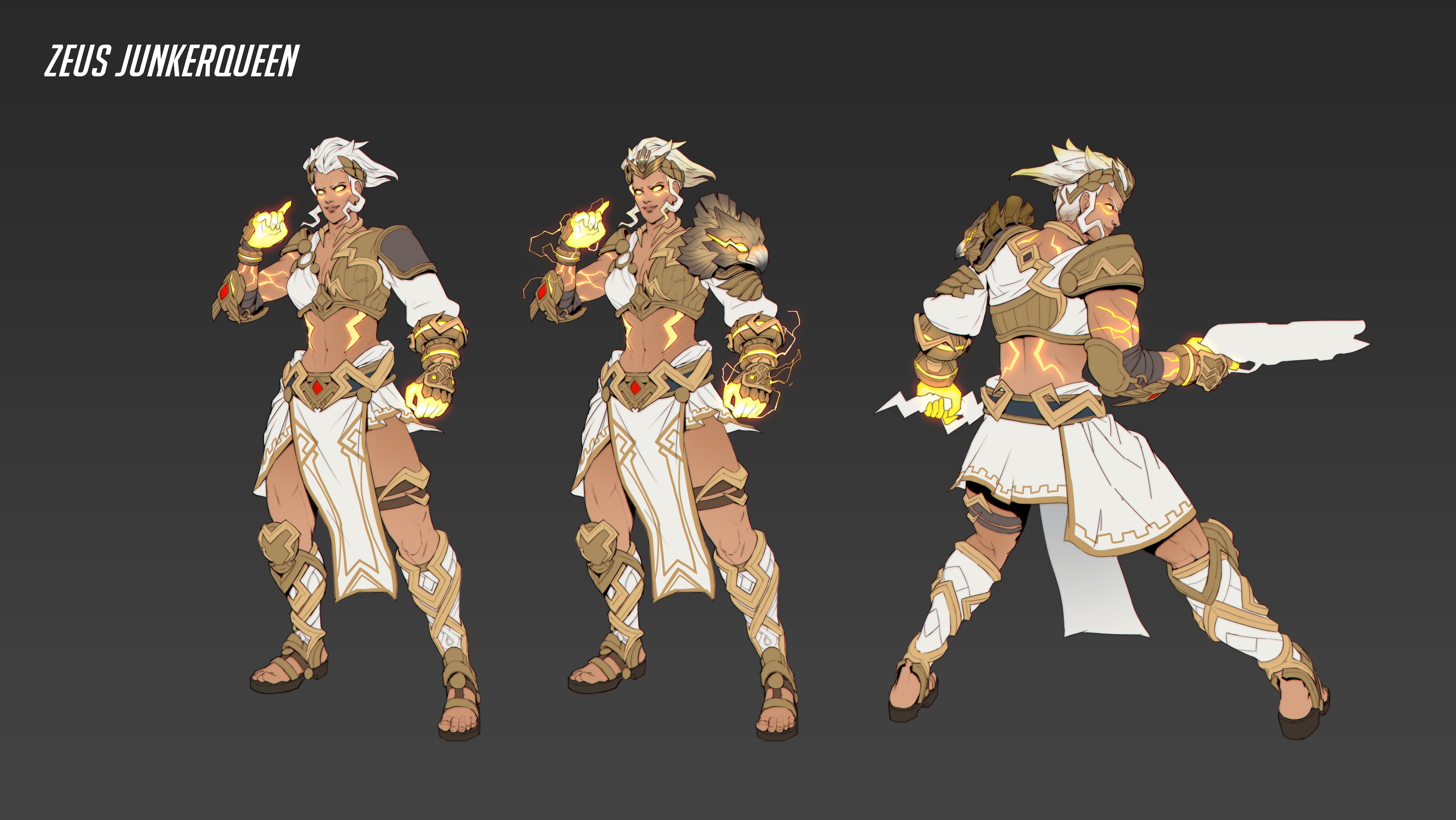 You’ll see streaks of lightning throughout her kit: for example, her scattergun’s muzzle flash simmers with electricity when she fires. “When Junker Queen hurls Gracie, you see a bolt of lightning strike down right on top of her enemy,” says Knowlton.

“Her ultimate has been transformed into this big, angry storm of metal and electricity. The lightning effects in her kit make her feel like she’s hitting that much harder because she doesn’t just shoot out lightning, she conducts it with her magnetic gauntlet.

Creating these ideas and putting them in-game is a multi-faceted process that involves many parts of the Overwatch team and requires a lot of consideration—How do we push our art to the limit while prioritizing gameplay? How can we maintain a hero's identity? How do we make sure no one is getting a competitive advantage?

Transforming the queen into a god

Any time we add new content to the game, we always consider the memory requirements it takes to run the game on different platforms. The game doesn’t update smoothly if we use up too much memory. “We’re constantly innovating while building new textures for visual effects because we don’t want to strain memory and always prioritize gameplay performance,” says Knowlton. 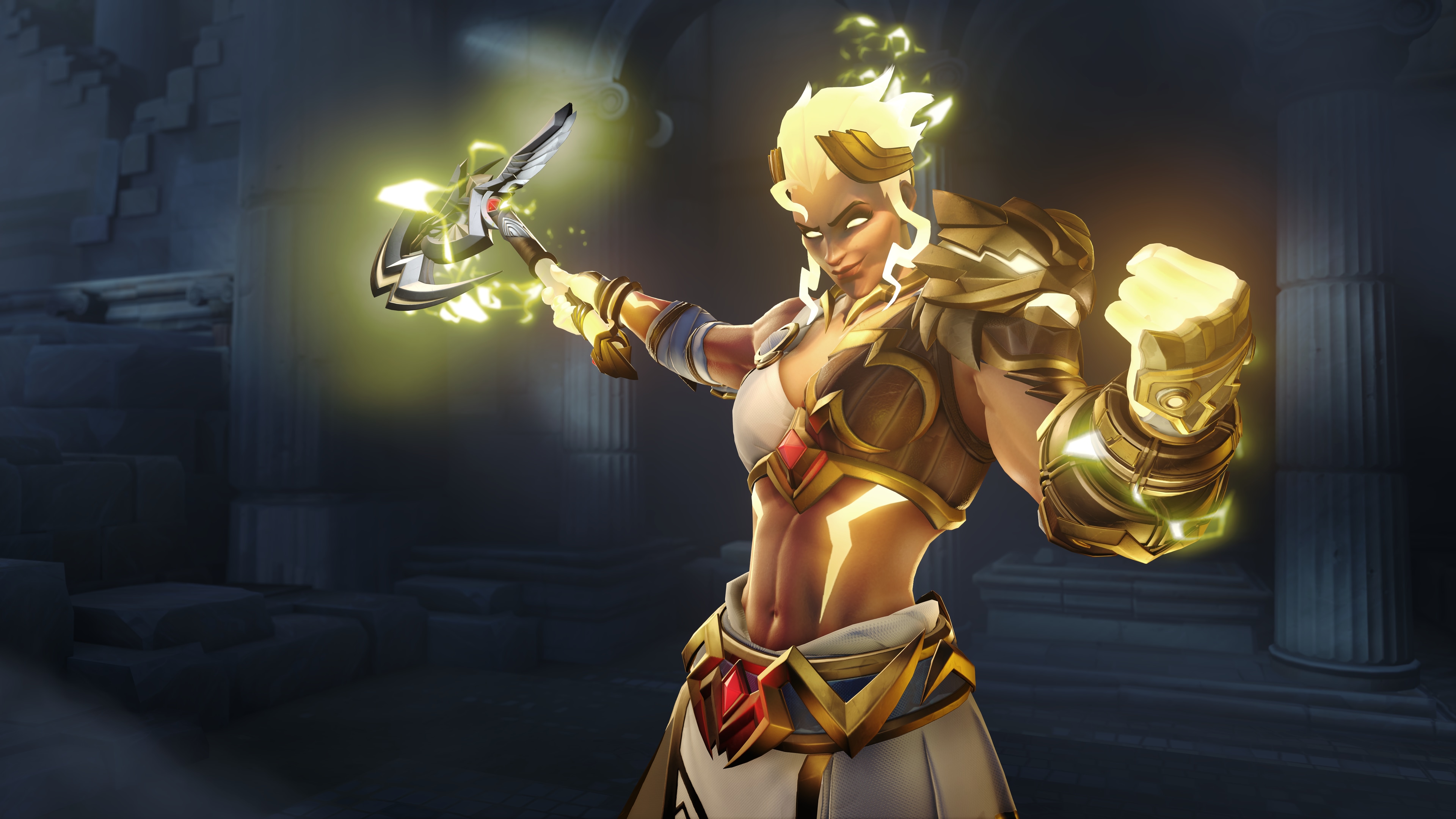 “Philosophically, we like to stay away from procedurally generated textures in-game, so almost all our textures are hand painted. A prime example is the lightning bolt that strikes Gracie’s target. The lightning bolt itself was hand-painted, and then we go in and add unique shaders."

Another facet of optimizing gameplay through special effects includes design elements that give a hero their own identity—both in lore and gameplay.

“Our team is adamant about making sure that Mythic skins do not give a competitive advantage,” says Knowlton, “Allies will see all the updated visual effects of the skin, and enemies won’t have to re-learn a visual aesthetic to play against that skin.”

“What I mean by that—when you see a Lúcio shooting around a corner, you can recognize those projectiles are his even before you see him. That’s part of his design,” he says. “So, when we’re creating new textures, the hero still needs to be recognizable and true to their vibe. We want you to know who’s shooting.”

If the designers and artists go in and alter these fundamental effects, it could give players the wrong idea or mixed messages across skins regarding what a hero can do on the battlefield.

“It really takes the perfect storm to create a Mythic skin, not just her visual effects,” comments Knowlton.  “Concept art creates something very inspirational, and then VFX gets a lot of space to build something that fits within the concept and the world of Overwatch.”

Concept art, modeling, tech art, VFX, SFX—they’re all part of the strike team that works together to inspire one another, form ideas, and create a unique experience around a new Mythic skin.

“When we did the Junker Queen Mythic lobby, the audio team was super excited after seeing the animation, and that inspired the sound designer to start early,” explains Knowlton. “Normally, I’m working before the audio team even starts, but hearing the audio early helped my imagination visualize what we needed for this lobby.” 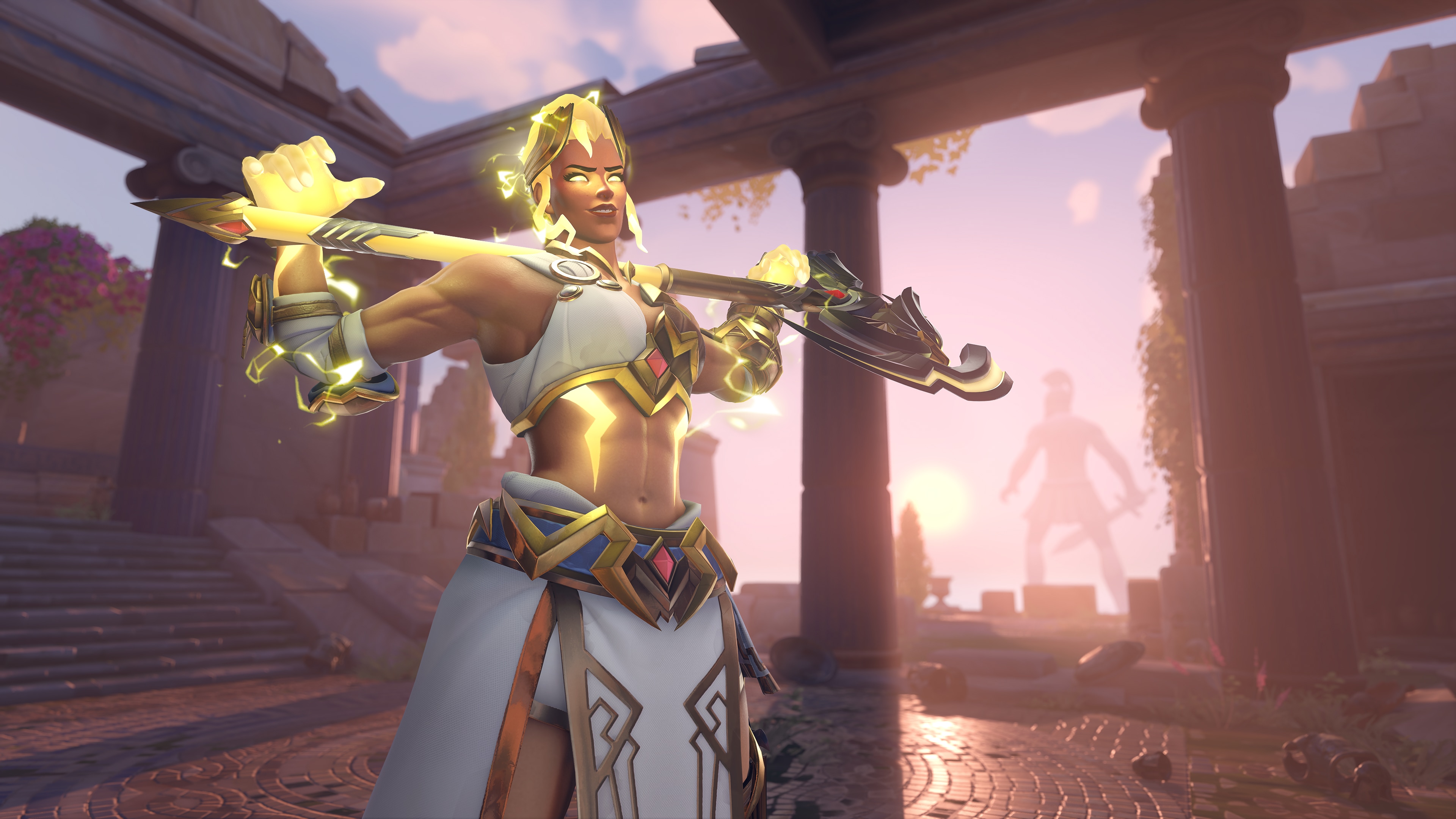 “My favorite part of this work— creating a Mythic skin—is the amount of collaboration and back and forth between the team,” says Knowlton, “Once a hero gets to that Mythic status, you collaborate with multiple teams—audio, concept, modeling, tech art—everyone is there, and everyone has meaningful contributions.”

Knowlton continues, “I also really appreciate the way our team builds heroes on the back end so that it’s possible to create skins at a Mythic level. We had to build the Mythic skin system from scratch, and, through our amazing tools teams, we can add these cool things to the game.”

Since we didn’t have this capability prior to Overwatch 2, Mythic skins are something unique to the game we’re all playing now.

“Because of the work on the backend, we have the ability to change the look and effects similar to how we can change the skin on a hero,” he explains. “The heroes are already playable and have complete visual effects kits established that give our team so much room to explore and create alternative visuals like the Zeus Mythic.”

We’re incredibly happy to see players enjoying the skin in-game! Knowlton concludes, “Have fun with the latest Mythic skin, enjoy the visual effects, and get excited to smite your enemies with Junker Queen Zeus.”

Make sure to jump into Overwatch 2 and complete your premium battle pass by February 6 to earn the Zeus Junker Queen skin! You can earn additional XP boosts by grouping up with friends and completing challenges.