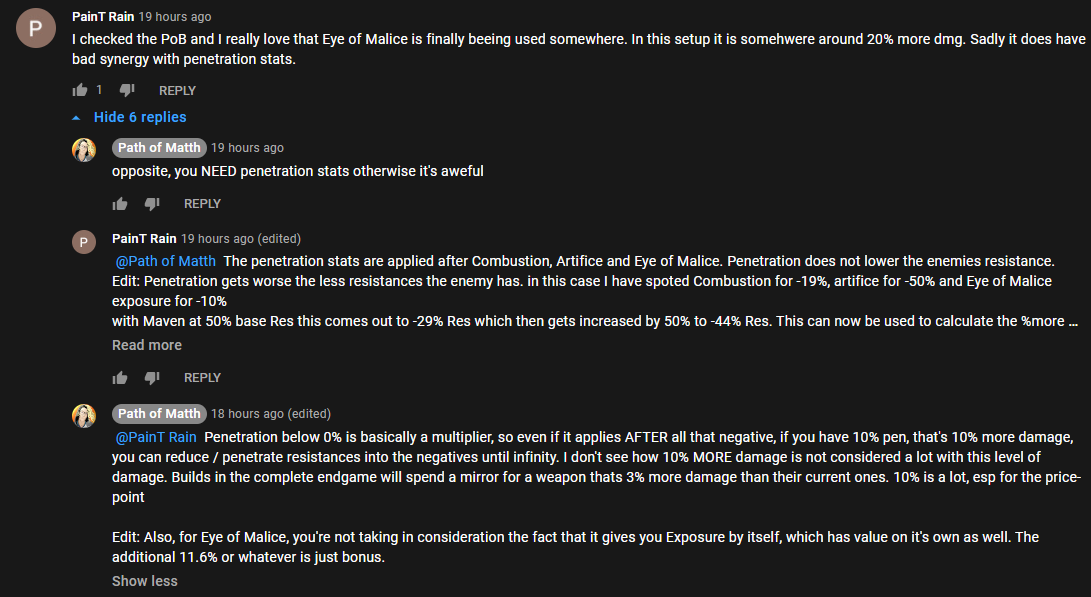 So if I press Alt over EoM it clearly states that 1) it also multiplies negative res (so it does, in fact not "increase" them, it just multiply them) and 2) this effect is performed after ele reduction but before ele pen, right?

Jesus, I can't understand why GGG leaves such details to the wiki and/or word of mouth. This is clearly a detail that can make or break a build and here we are, divining the meaning of obscure and/or ambiguous words, whilst the exact behaviour is exactly coded on their side /endrant

P.S. it kinda reminds me the issue I had with the Mark of the Shaper that doesn't summon VA on mines, even if it worded "on kill" rather than "on your kill", but that's another story.

also multiplies negative res (so it does, in fact not "increase" them, it just multiply them

This is untrue. It is an increase modifier, and is additive with any other "increased" or "reduced" modifiers applying to those resistances. Such modifiers are rare, but do exist.

This works exactly the same as any other "increased" modifier in the game. Increases mathmatically take a % of the value, and add that to the value. If the value is negative, this makes it more negative.

This is not preformed after "ele reduction", it is additive with any actual "reduced" modifiers to the resistance. People in this thread (and in general) are incorrectly using that term to refer to modifiers which subtract from resistance. In PoE, modifiers which add/subtract to the base value are always applied first, then all % increases and reductions to that value are summed and apply additively, (and each different "more" or "less" modifier applies separately multiplicative with other modifiers to the value, but I don't think there are any of those for resistance).

This is exactly the same as how +10 to maximum Life applies before 10% increased maximum Life (and thus also benefits from the increase).

but I don't think there are any of those for resistance

For completeness, I think Tempered by War is the singular case.

← More from Path of Exile