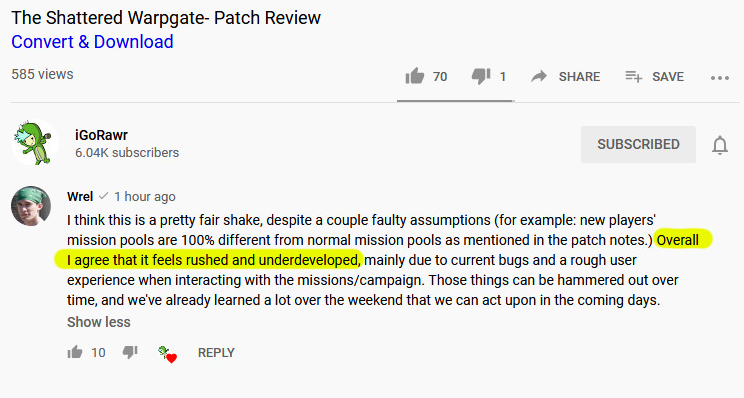 Apologies for showing up late to respond to this thread, but I'd like to clarify some of the assumptions and interpretations of u/wrel comments being posted.

First, since the inception of the Rogue Planet Games studio/team, there has been absolutely ZERO interference or influence from "higher ups" outside of the studio to force our hand in making ANY decisions. If anything, Daybreak and their exec team has been supportive in every way possible. Whether its through approving new hire positions, increasing our budget to further promote or support the game in a meaningful way, etc. For better or worse, Planetside 2 is in our control creatively.

Regarding u/wrel's specific statement above, I agree with the sentiment 100%. A few of the bugs being reported were known, but did not seem as egregious as they ended up being once Live. But many of the issues being reported on Live were just not surfaced during our internal testing and/or PTS playtests.

That said, the onus of green-lighting this update, every update this year and all going forward is on us - specifically u/wrel and me. We are happy with a vast majority of the changes in the Shattered Warpgate update, but there were definitely some misses - as u/wrel posted about on Friday - that we have actively been working to resolve since Thursday's publish and will continue until we are feel that its in a good place.

As of this moment, we are preparing a server update that addresses several of the issues and complaints that have surfaced. Its looking like the publish will be ready either tomorrow (Tues) or Wednesday this week.

Again, I apologize for now addressing this sooner. But I wanted to make it clear that as convenient as it would be to just point the finger at someone else, that just not accurate. It our game and our decision to publish when we do.

r/Planetside - Alert Rewards, Missions, and You.
Oh, hello again. Thought I'd chime in before the weekend to allay some concerns. There's obviously a lot of blowback regarding the alert reward …