This month the team has put together quite a juicy update, rich with new information and a whole bunch of major additions being worked on in the background.

Development during May was great all across the board! We saw a lot of substantial progress in key areas that ultimately led to one of the most important months in some time, bringing in a lot of important gameplay changes and UI elements.

Though things are going extremely well on our end, we should note that Beta is most likely to take place in Q3 so that the team can really polish up the experience. We’re introducing quite a few complex systems and we'd like to ensure most of the prominent edge cases are covered before pushing another major release for testing.

Core Progression Systems In rather significant news, the logic for our core progression systems like Park Rating have been written. For the first time in the project’s history, we’re able to test and simulate the progression of a park, its economy and inventory of animals (more on that in a minute).

All that’s left to do for self-functioning progression is to link up actual gameplay values like exhibit data, animal welfare, park statistics, etc. In terms of the maths and calculations required behind the scenes, that’s all been taken care of.

Improved Graphics Between developing systems and iterating, we’re continually tweaking the game’s visuals and seeking new additions where we can. In May, we introduced a double-pass of AO, bringing richer depth to the shadows and making the game pop more. This change has little impact on performance and can always be disabled. 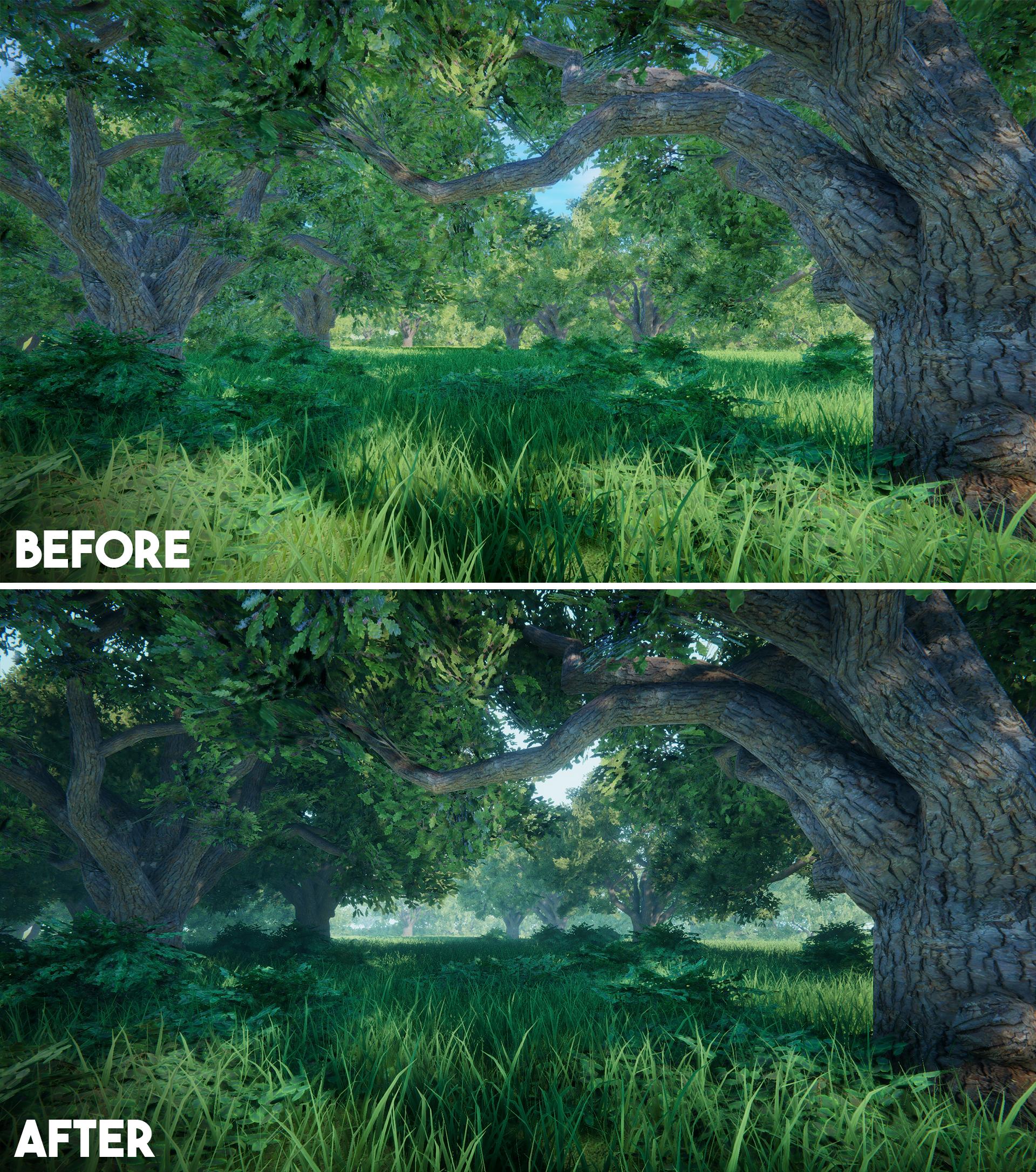 To top it all off, we also introduced an anamorphic lens flare to hit that slightly more cinematic quality on bright surfaces. 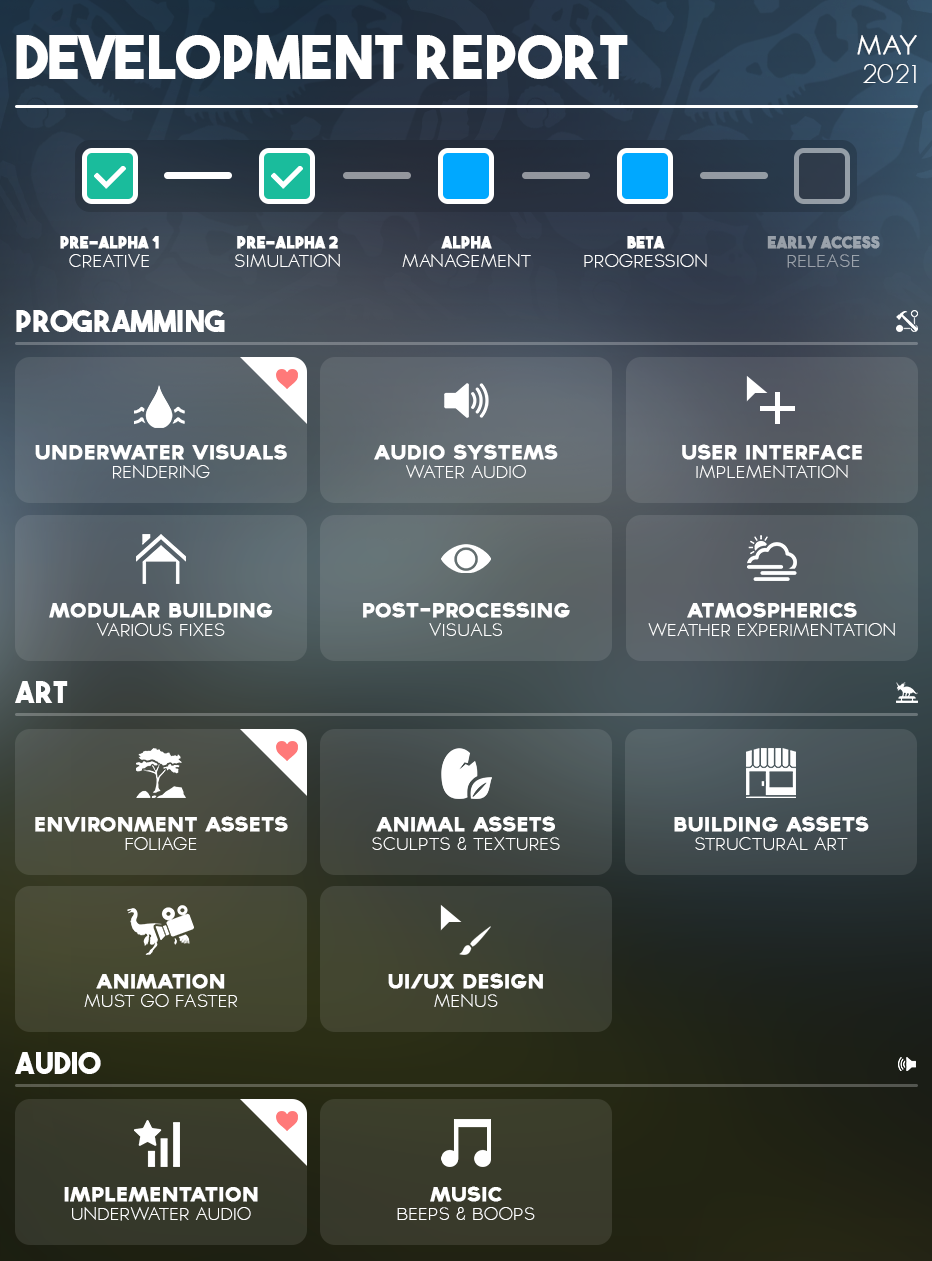 Progression Mechanics As discussed, three large parts of the game’s progression mechanics and their related management menus have almost been finished up, ready for data to inform their systems.

Overview The Overview menu is where you’ll find the breakdown of your park as a whole, acting as the hub for checking your park rating and performance. 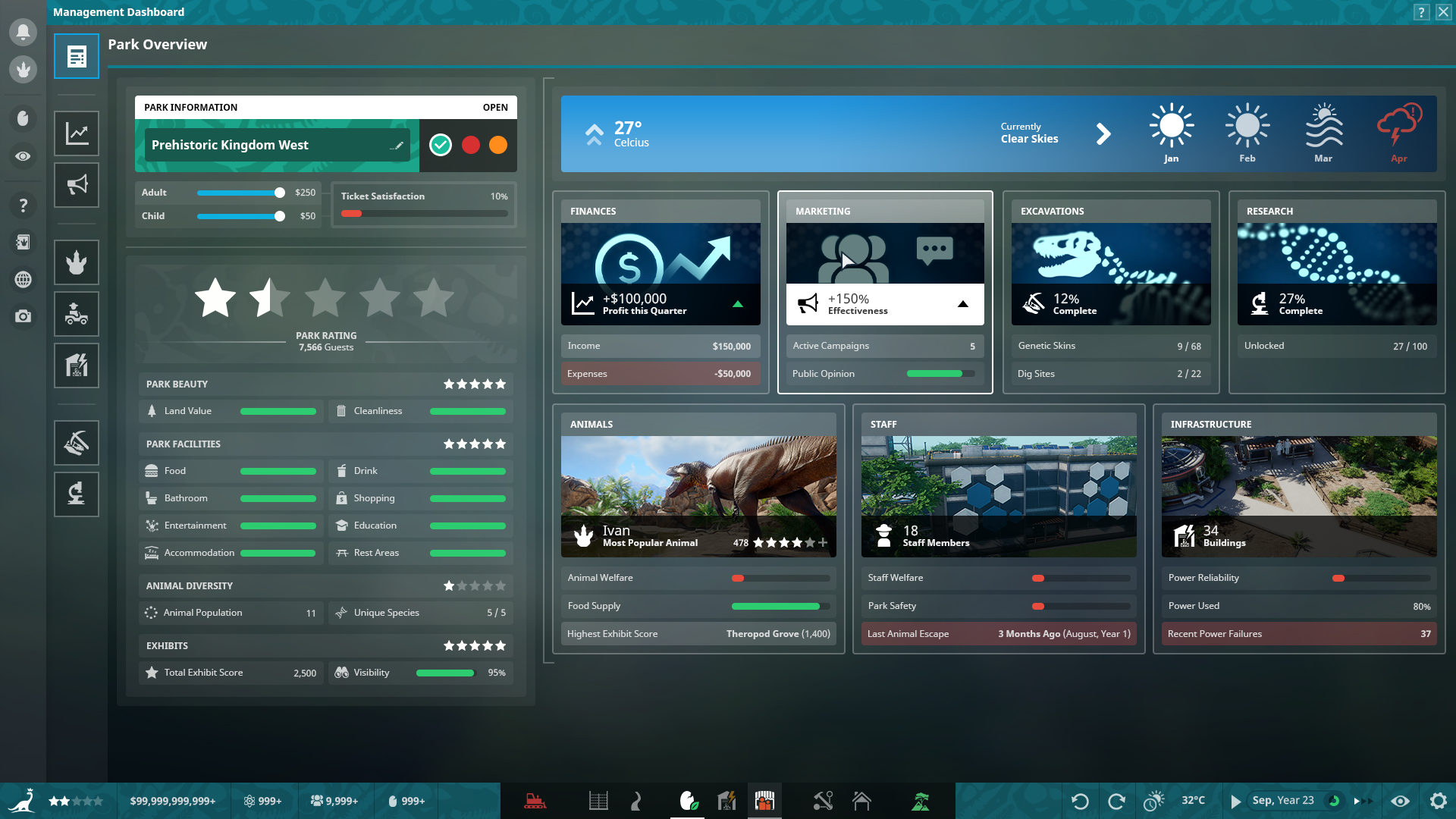 Relevant management statistics and the weather forecast are all visible on the right side of the screen, offering a surface level look at various areas or activities that players can interact with.

Finances Money makes the world go ‘round, even in Prehistoric Kingdom. As we’re working with more “grounded” pricing, your animals and infrastructure can be quite a hefty investment; potentially costing millions of dollars! 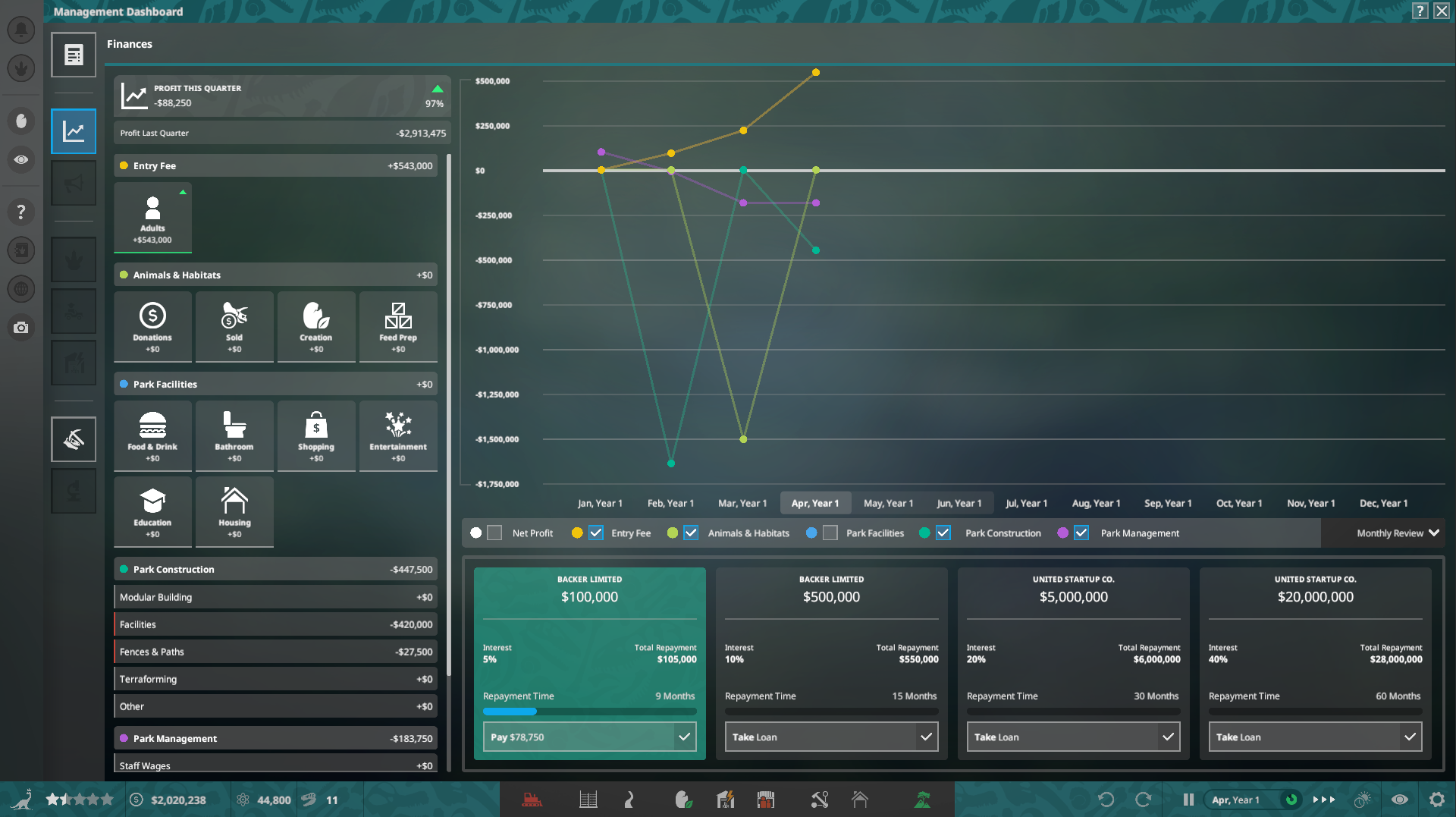 From the Finances menu, players can look at their quarterly performance to see all their recent profits and expenses. The customizable line graph on the right shows what you’ve been up to over time with the option to switch between a monthly or yearly review.

If you’re really struggling or need a boost, players can redeem loans that are paid off at a flat interest rate per month. With factors like facility upkeep as a monthly overhead, we’re curious to see all your failure and success rates during Beta.

Excavations Excavations are how players selectively unearth new animals over the course of the game. Locked off by the current park rating, dig sites can be purchased with cash while the animals inside are unlocked with a unique currency, science points.

Though some animals are missing their prices or other stats, the experience surrounding this part of the game is really starting to come together - take a look!

Weather Part of the many improvements coming to Beta, we’ve been experimenting with the game’s weather and atmospherics to see what types of climate conditions we’d be able to simulate. In June, we’ll properly start the process of creating weather presets and fully implementing them into the game’s calendar year. 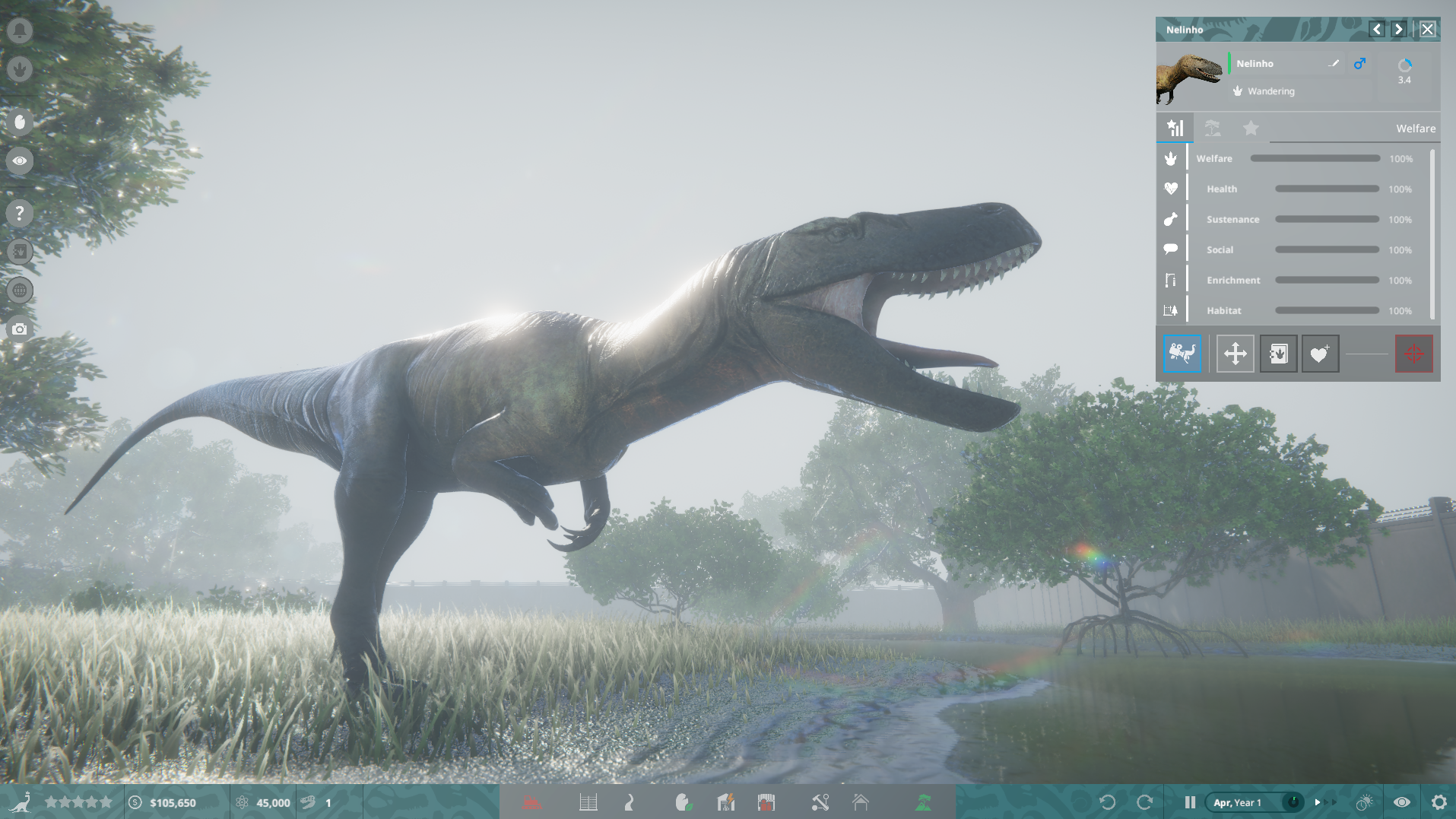 As you could probably guess, the weather system will also influence the park’s soundscape and other simulations like temperature. It’s a level of immersion and detail that we’ve never quite had before, so we’re very excited to see where it’ll take us.

Underwater Rendering & Audio Take a dive beneath the surface to experience your park from a splashing new perspective!

Underwater rendering is here and we’ve approached it in quite a refreshing way, allowing for a seamless visual transition between what’s above and below the waves of your prehistoric ponds. 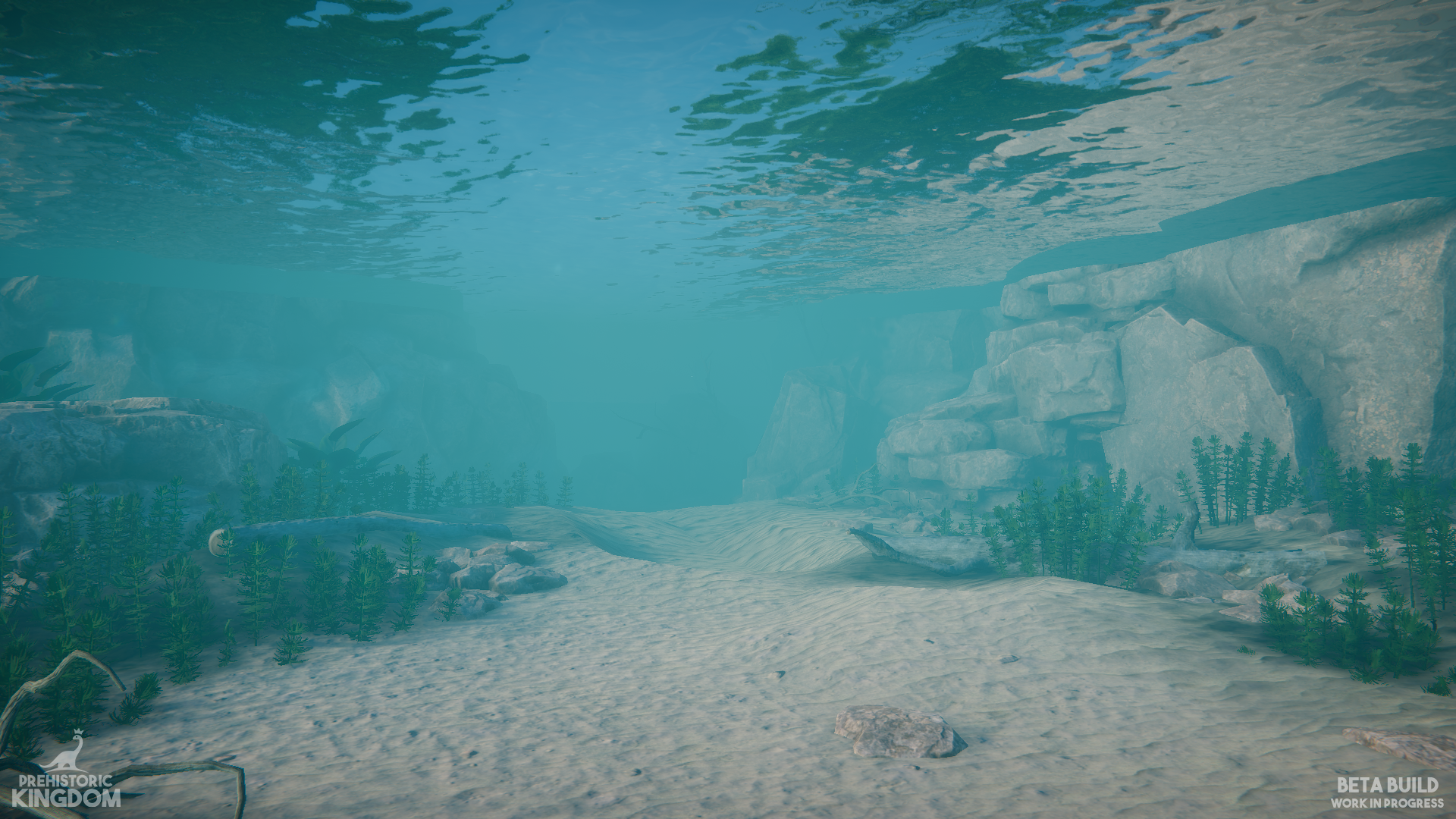 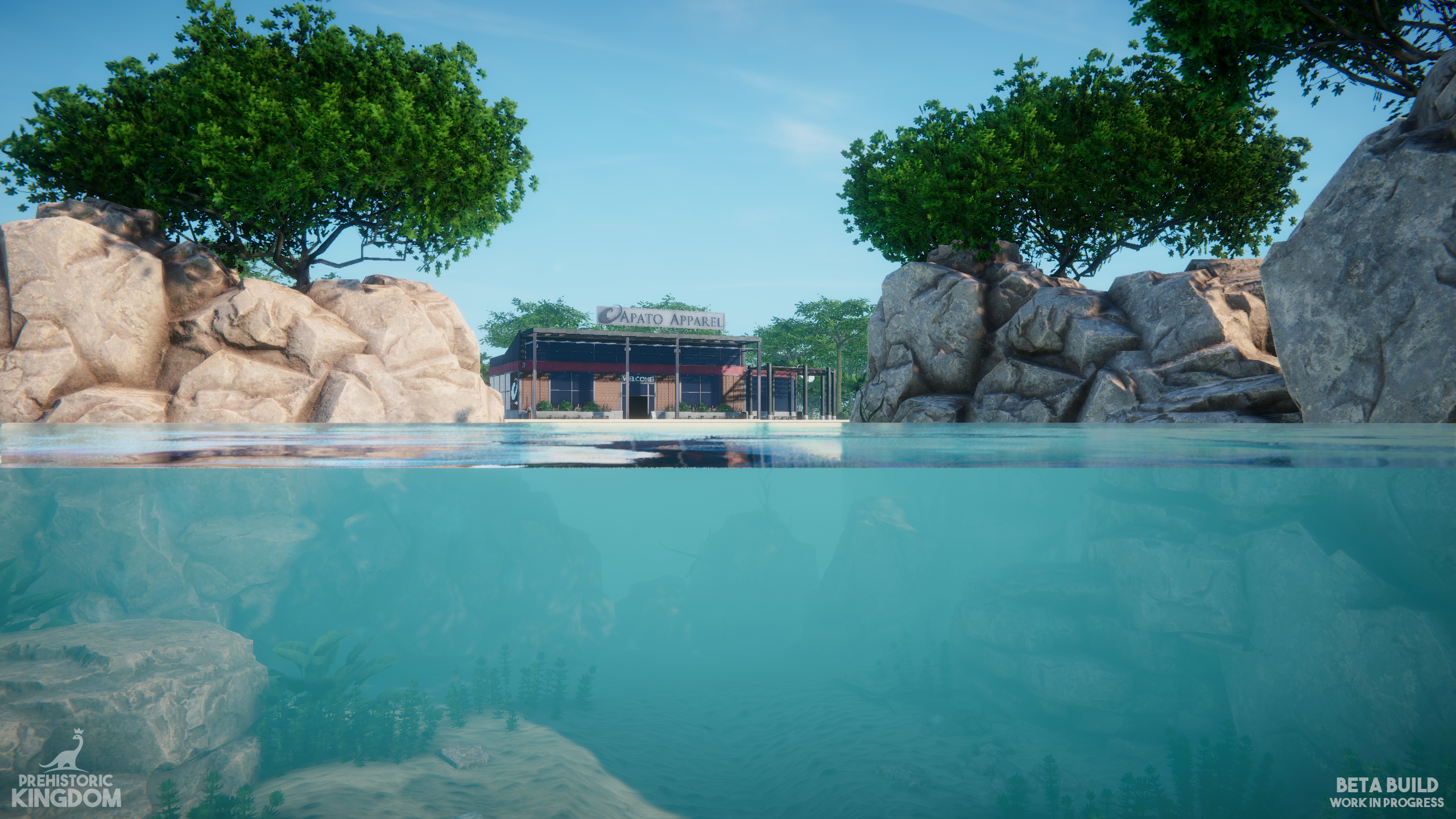 Our soundscape changes with the camera’s position, too! As the player plunges beneath the surface, elements like animals, buildings, music and ambient audio are filtered out depending on how deep the camera is underwater.

In the future, additional wildlife audio will be introduced to give the impression of a bio-diverse wetland in areas with water.

Mini-Aviary: Locomotion Changes Flying animals in a contained space are difficult to get right, no matter how you approach them. For us, the best option for our tiny Microraptors ended up being animation loops and predetermined locations, though even that has its own set of unique challenges to overcome.

In May, we began developing a more dynamic approach to setting up their navigable paths. Instead of hand animating the entire motion, we’ve instead switched to using spline and velocity data to inform how a creature should animate as it moves along the path.

This might sound like the most obvious choice in hindsight, but the reality is that this approach has a much higher technical development cost to get it looking right and functioning correctly. The biggest benefit of this solution, however, is how much time it cuts down on animation, allowing us to build a library of unique movements that the game can pick from. 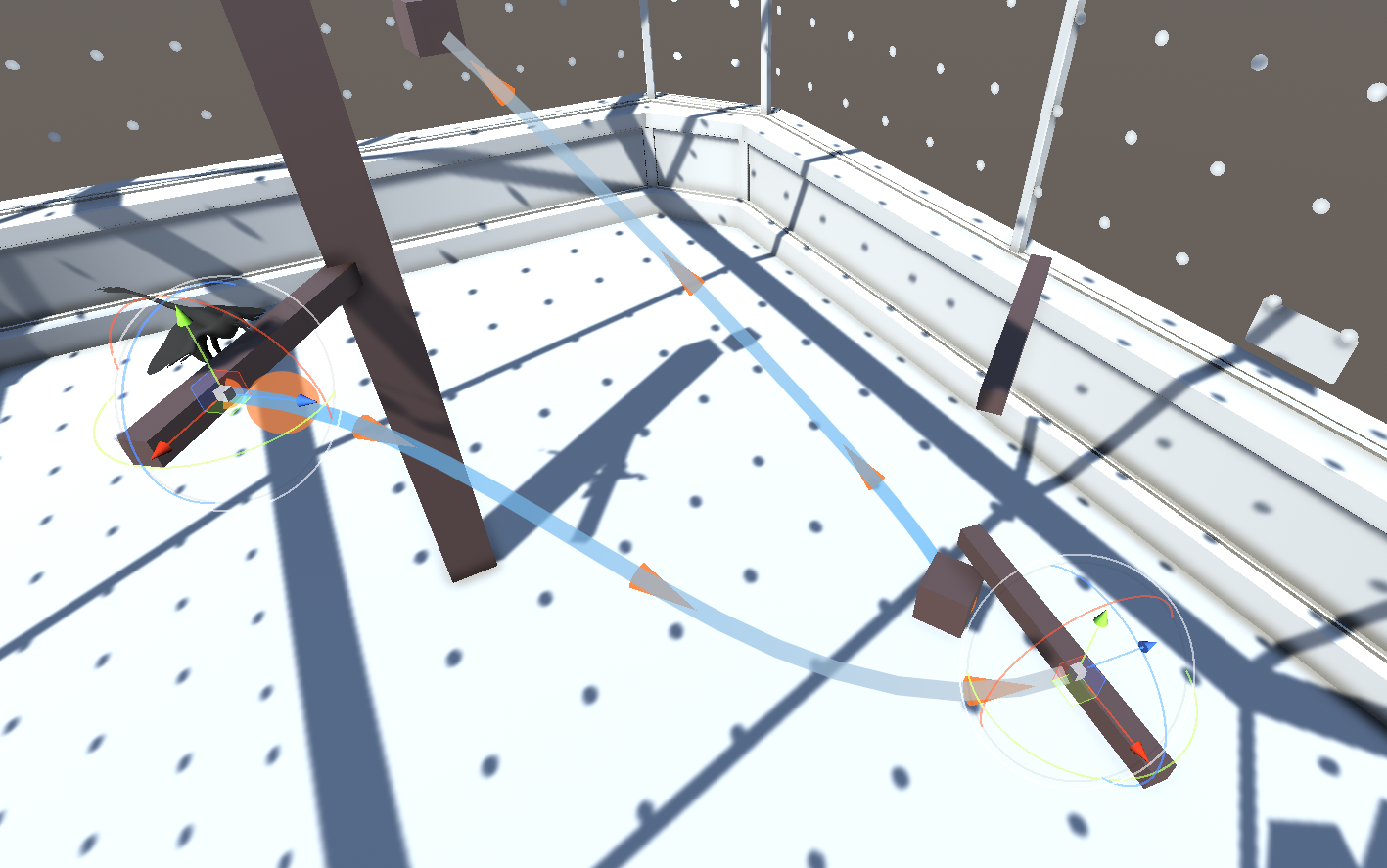 Music With almost half an hour of original music already written for Beta, the score is starting to take its shape! To celebrate, this month we’re showing off two more snippets from the soundtrack, All For Them and Ingenuity (non-final mix).

Foliage Showcase The Coastal biome received its quality of life update, introducing loads of new items to bring its total foliage count up to 21 variants. 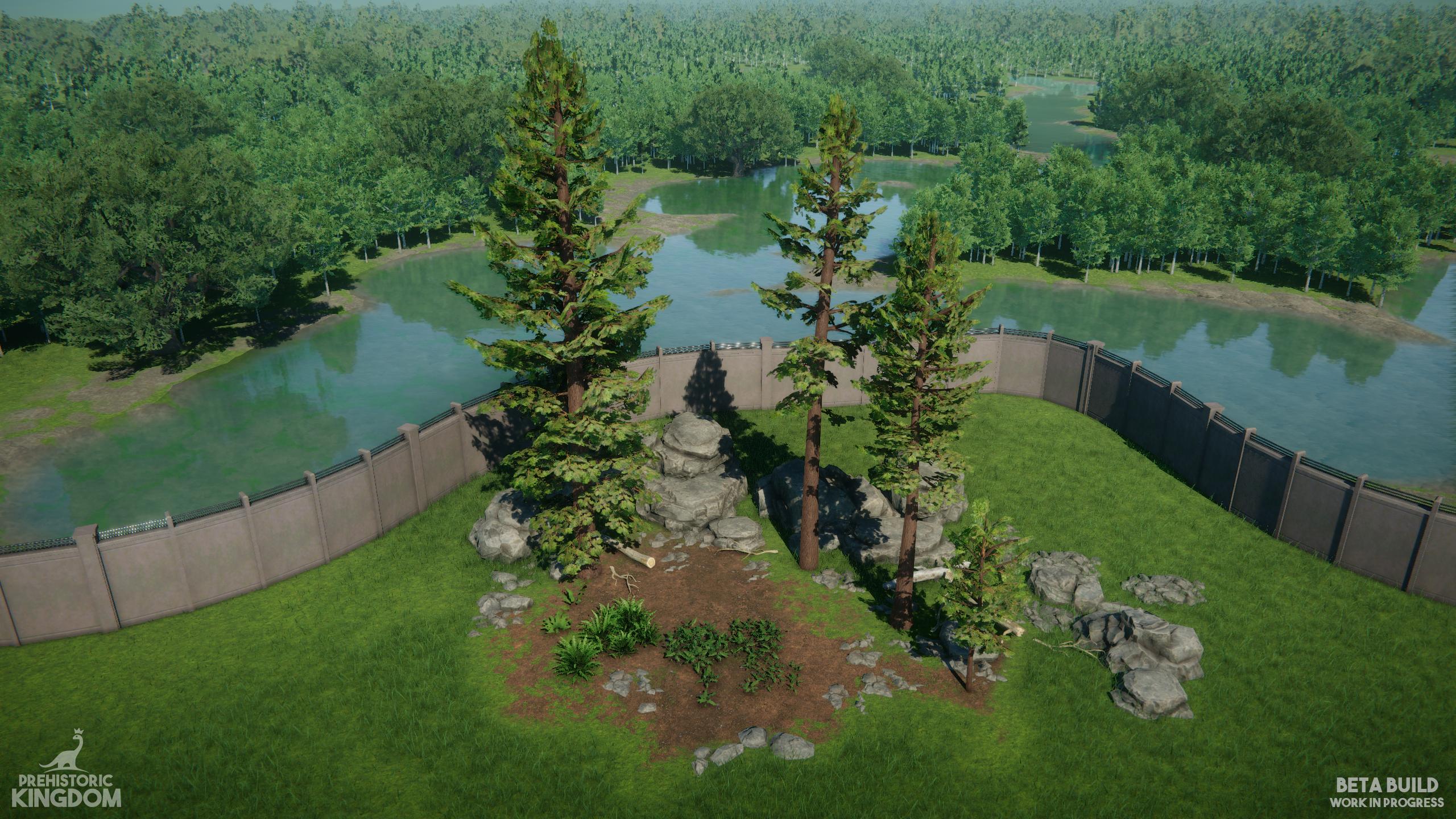 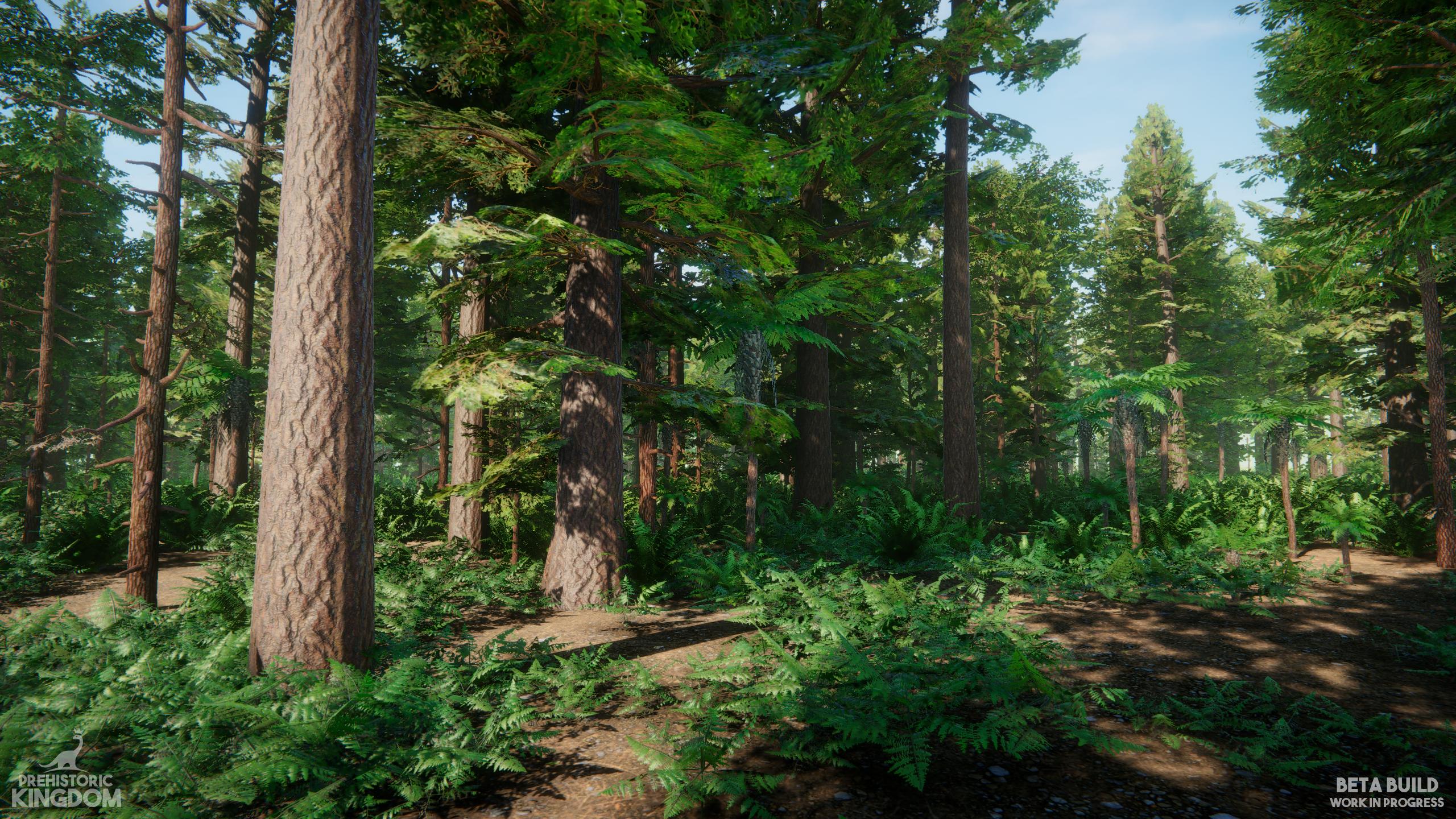 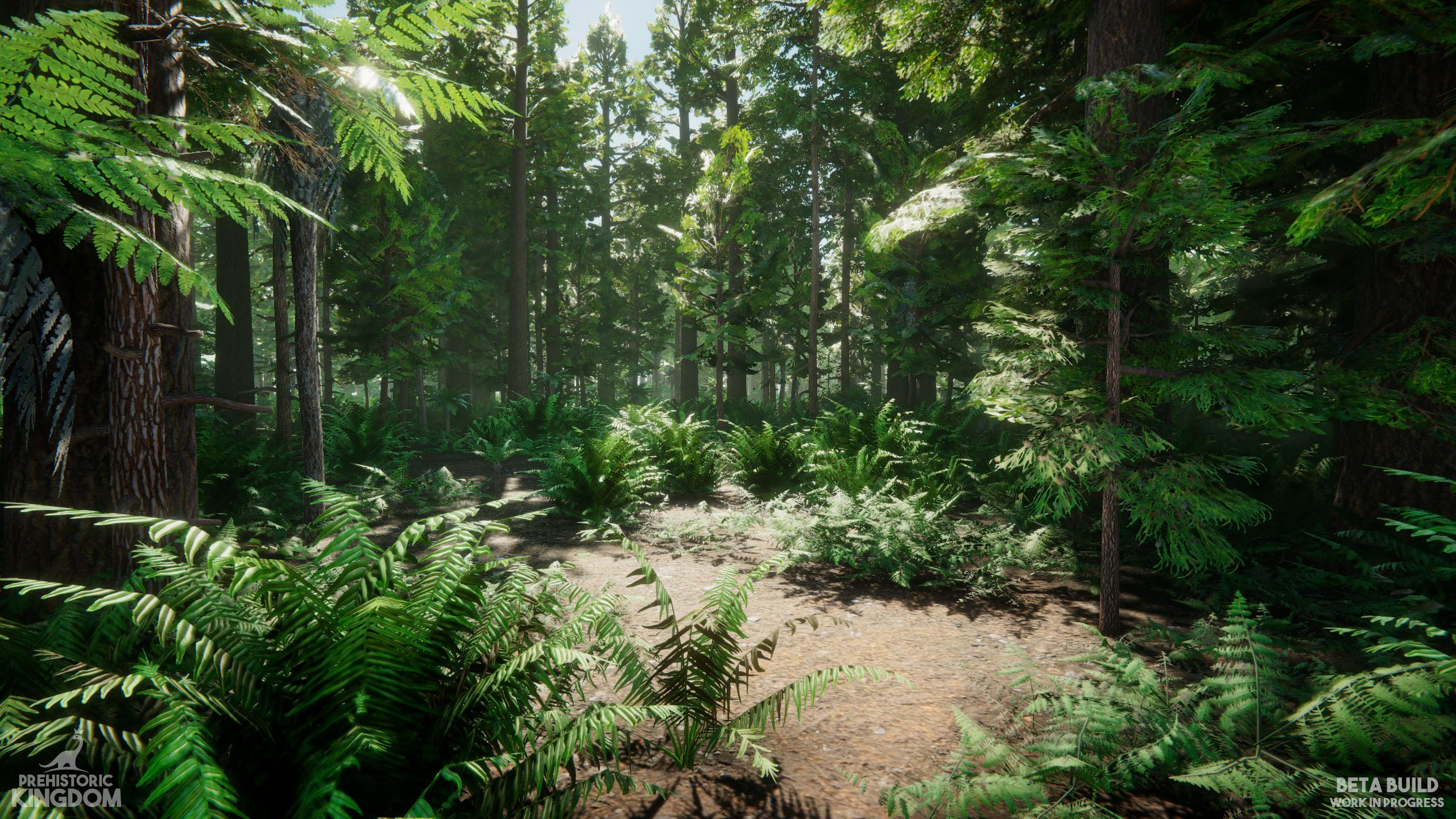 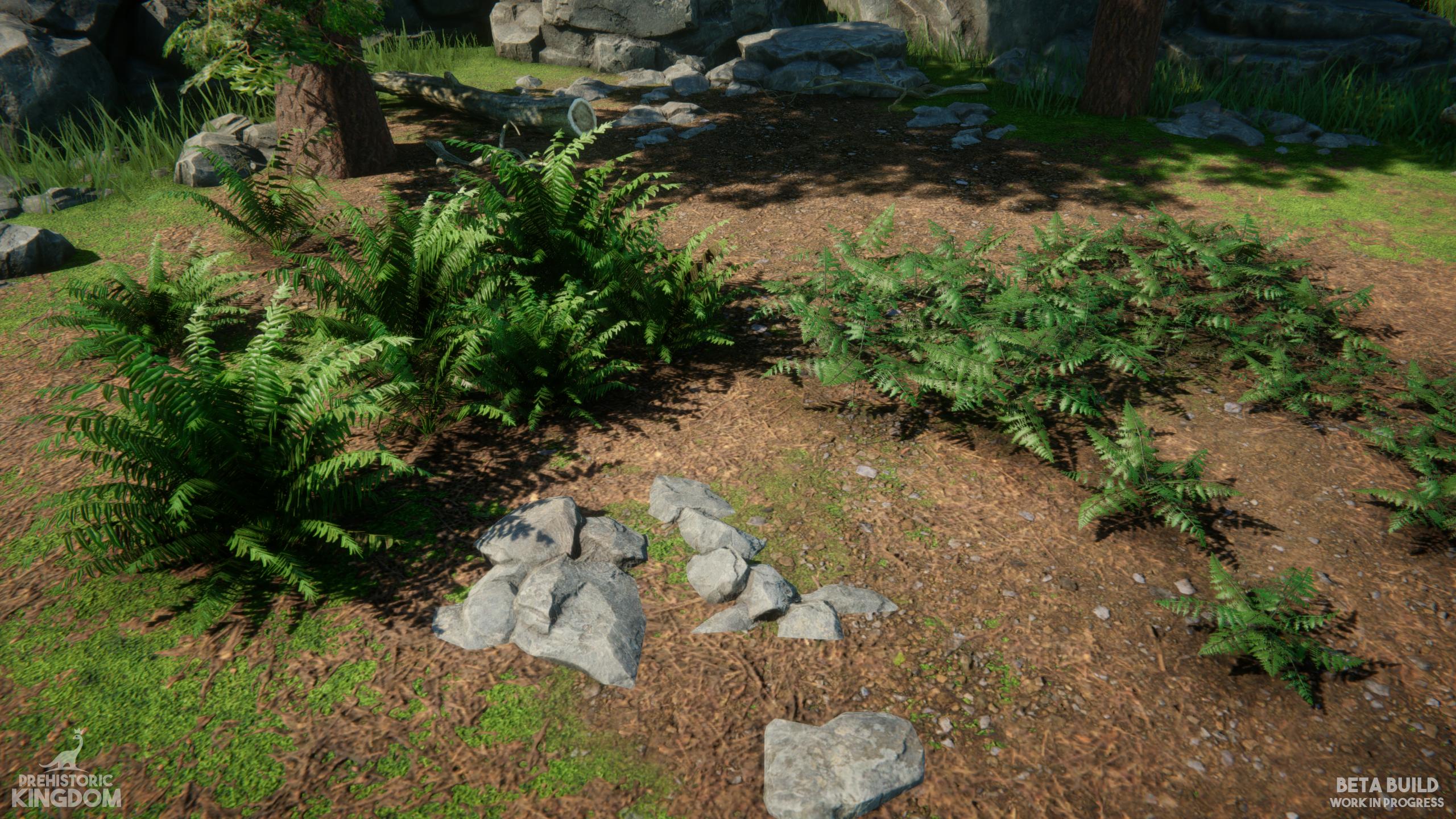 Animal Showcase Perhaps one of the most well known hadrosaurs, Parasaurolophus is a truly remarkable creature. Best identified by the elongated resonating chamber on its head, three of its species are spread across the world ready for players to find in the upcoming Beta. 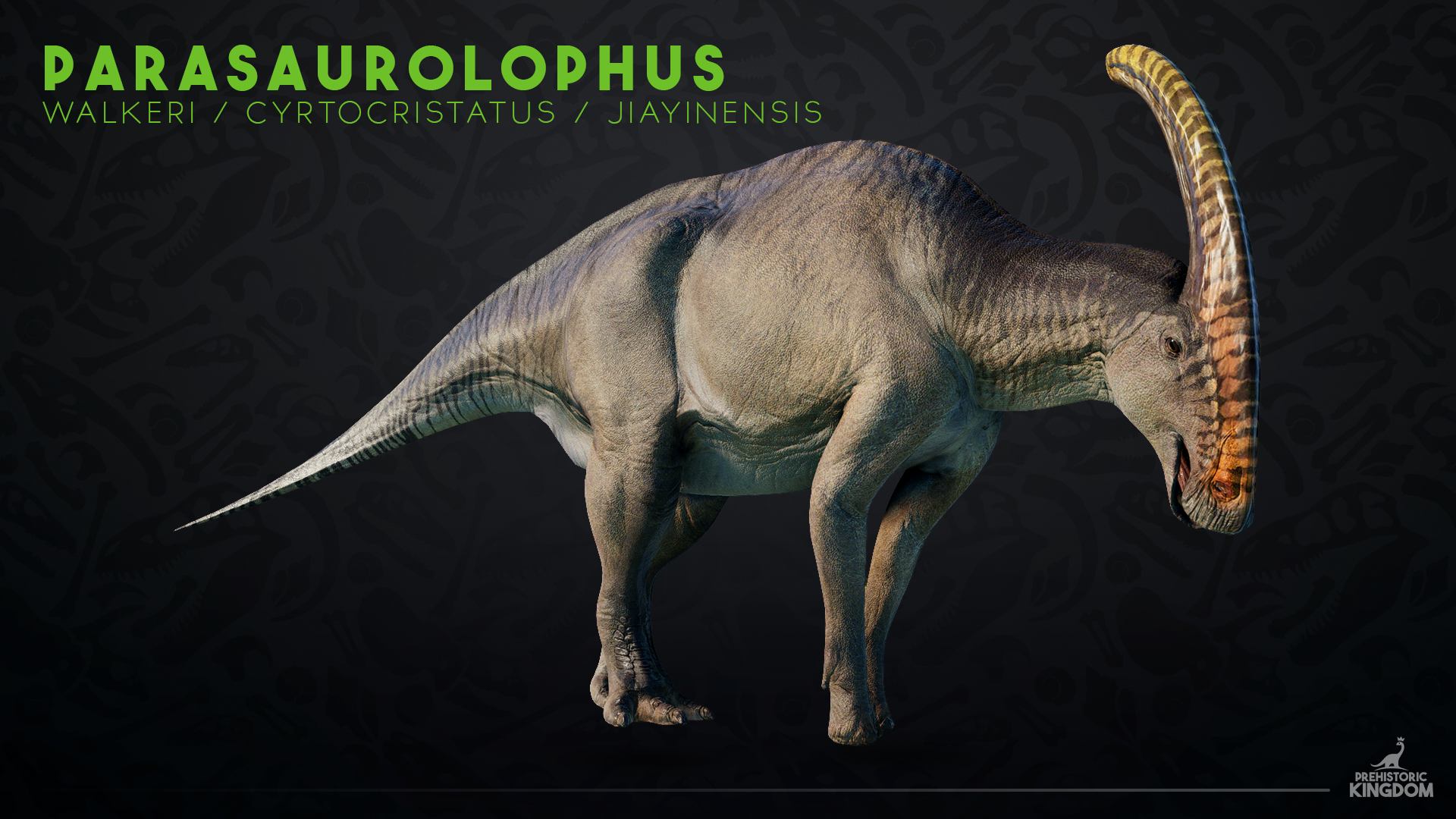 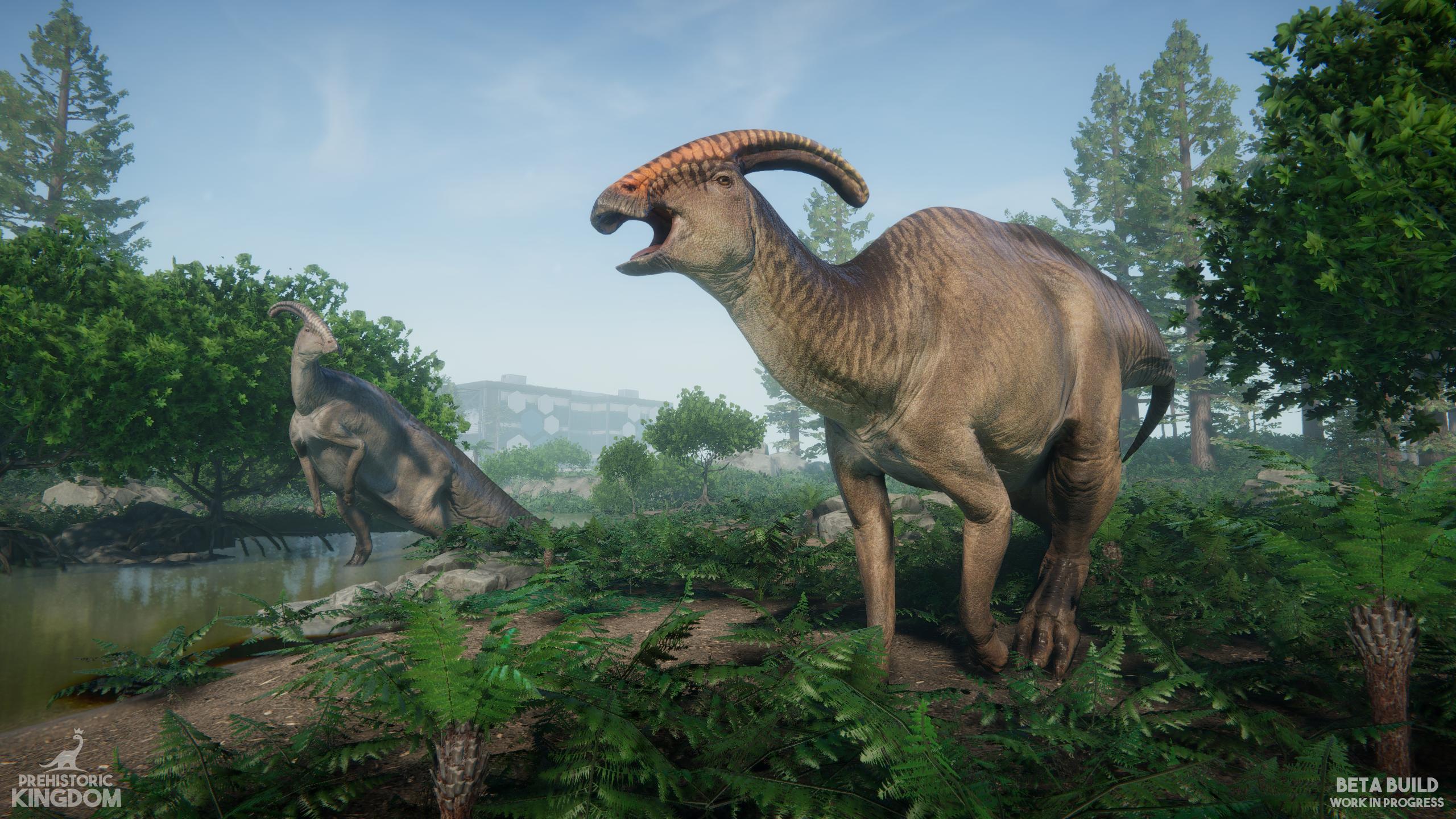 Nigel’s Voice Over Recently, Nigel teased his role in the game with a short dialogue preview! Click the link below to visit his Twitter page and watch this very special clip. 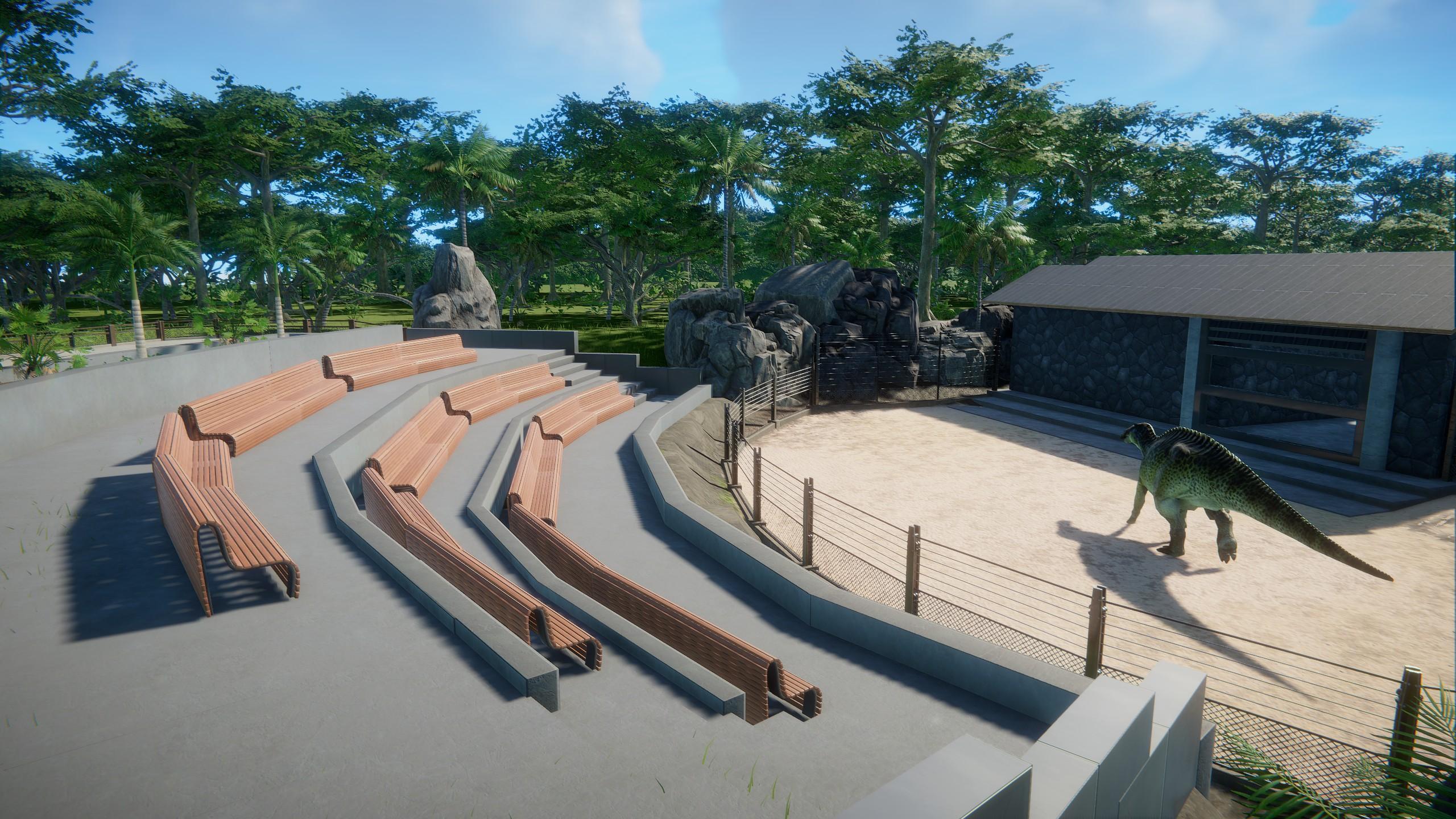 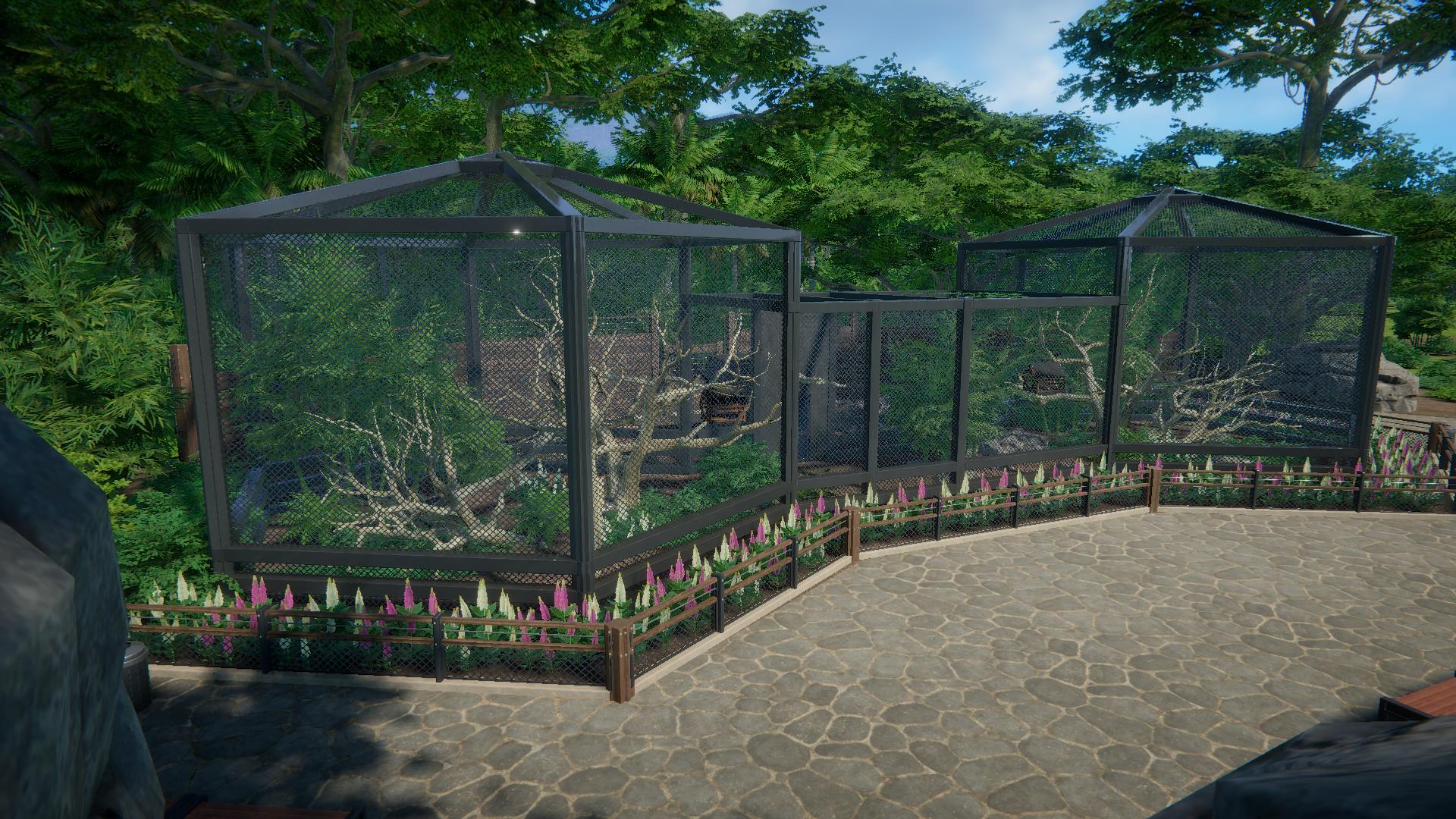 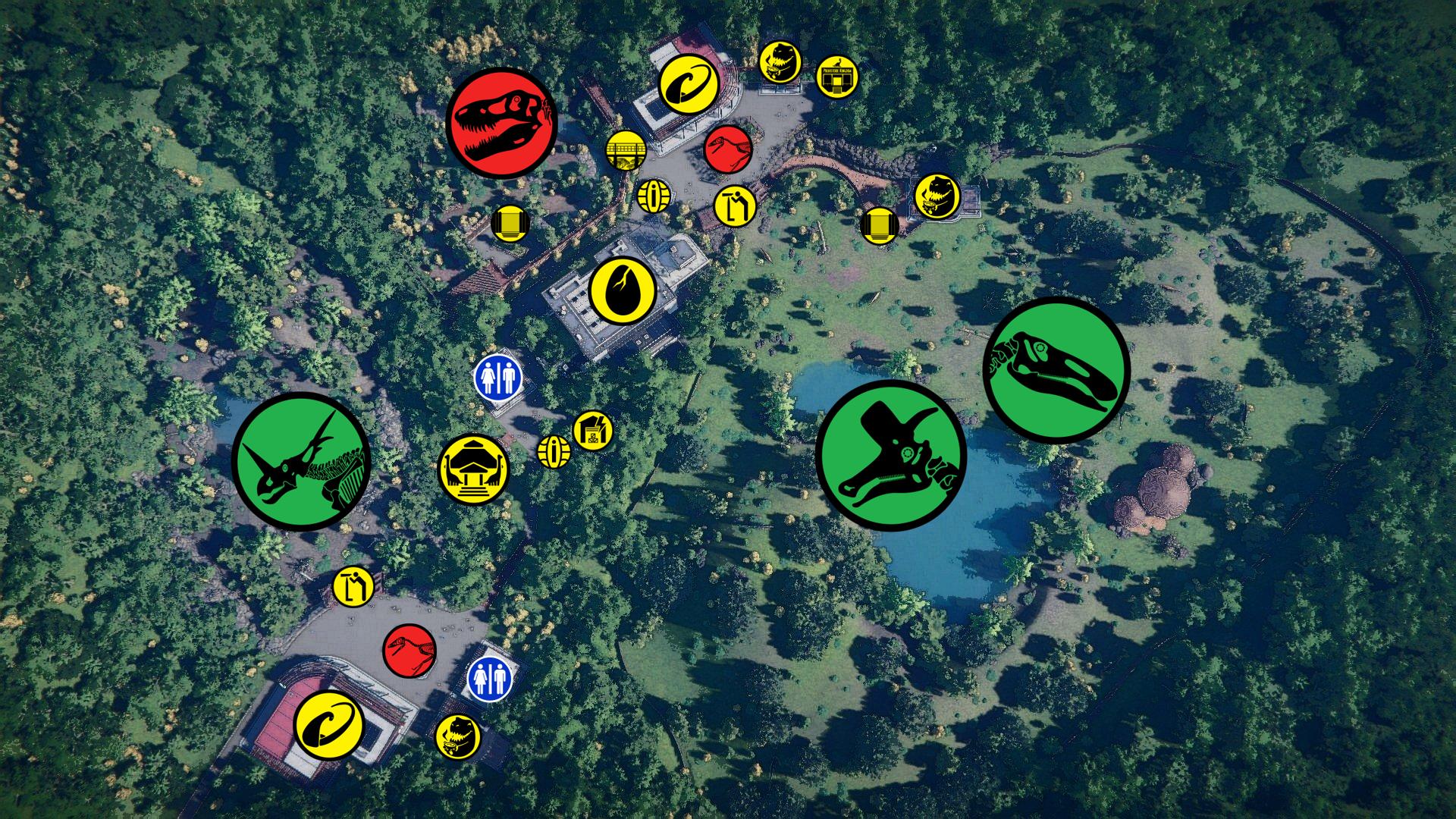 Thank you for reading May’s devlog!

After a highly successful month we hope that you enjoyed another Prehistoric Kingdom development update. As always we’ll be back next month with more information and great progress to share with you all!


r/pkgame
r/pkgame: Official subreddit for the game Prehistoric Kingdom! Take control of limitless power to build, manage and grow the ultimate zoo for …