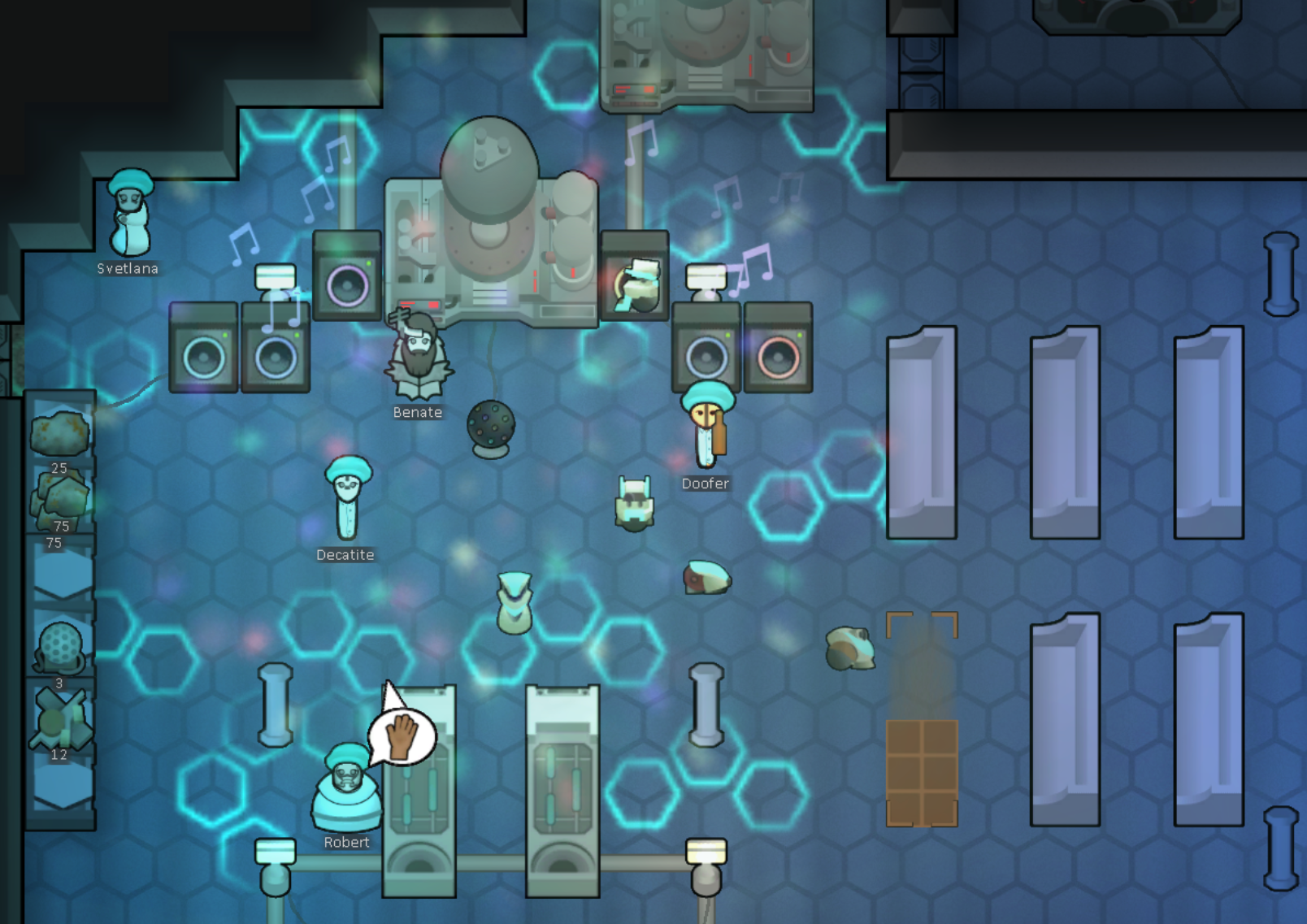 In a previous announcement, Ty covered the juicy details of this update. That same announcement has been shared below, as well as the changelog with our latest rounds of testing.

Thanks to everyone who helped us test this update. The community goes above and beyond with feedback and reports, and it genuinely helps us get these updates out so quickly. We've also tested the update for savegame and mod compatibility. If you’d like to help test our updates in the future, please join the official RimWorld Development Discord[discord.gg].

If you want to keep playing on the previous version of 1.4, you can use the Steam beta branch "version-1.4.3542". To do this, r-click RimWorld in the Steam library, go to properties, open the betas tab, and select the version from the dropdown.

Join us on Reddit to discuss the update here.

Cross-expansion integration We’ve been following feedback across the community (Reddit, Steam comments, Twitch, YouTube, and our insightful testers on Discord) to try to make sure all the details are covered. It’s a very complex game at this point, so there are quite a few details - having feedback from tens of thousands of people is frankly invaluable from a design perspective.

One theme that’s come up is the desire for integration between expansion packs. Originally, I was a bit hesitant to put this in because I worried it would feel like locking one expansion’s content behind another expansion. However feedback seems to indicate that people want it, and narrative-wise, it would make a ton of sense if the ideoligions from the Ideology expansion had beliefs about xenohumans, sanguophages, children, and so on. So I decided to work on this.

I’ve found over the years that the wrong way to design Ideology precepts is to just think of something that seems fictionally reasonable and implement it blindly. You end up with mechanics that “make sense” but aren’t actually storyful or fun. Instead, we decided to take a “goal experience” approach to the design: We wrote down a list of the specific play paths and role-play stories that players might want to explore, and which would also be fun. Then we created precepts that specifically open up those play paths:

Belief issue - Bloodfeeders: The vampire lord with human worshipers is a classic idea. So are the vampire hunters. This precept changes peoples’ attitudes towards people with the bloodfeeder gene (which in Biotech means only sanguophages, though you can of course create your own bloodfeeder xenotypes).

Belief issue - Child labor: We always had the idea of players being able to choose to invest more or less in children - to decide between using them as workers or fighters, or trying to strengthen their development with a rich and free childhood. Now ideoligions can have opinions on how this ought to be done.

Belief issue - Mechanoid labor: Machine worshippers need to be able to live off the labor of their electrically-powered buddies. When an ideoligion has mechanoid labor enhanced, mechanoids controlled by its mechanitors will work faster, but colonists will work slower (because why should a human have to do a machine’s job?)

Belief issue - Growth vats: Ideology has technology worshippers and technology haters, and they need to be able to interact with growth vats as well as biosculpter pods.

More generally, we linked xenogene implantation to the existing body-modding precepts, so those who love or hate body mods will appropriately love or hate having xenogenes as well (note this doesn’t affect germline genes, so you can still have e.g. a body purist impid ideology).

Those with beliefs about autonomous weapons will extend those beliefs to the use of mechanoids as well.

Other notable features Xenotypes breed true: Previously, there were sometimes broken-looking cases where parents with germline genes would have a child that lacked many of them. We removed some metabolism limits for baby gene generation and made the algorithm that generates baby genes from parent genes more flexible. This means that your gene-modded humans will pass down their genes completely and reliably.

Loosening the economy around gene-modding: Previously, making custom xenotypes during game setup worked well, but it was quite hard to actually do genetic modification during the game. Getting your hands on the genes and building all the infrastructure was quite costly and sometimes hard to justify from a game advantage perspective.

We’ve tuned some systems to make gene-modding more viable. Now, quest rewards come with a lot more genepack options and they’re available earlier in the game. We’ve reduced the xenogerm shock from extracting genepacks which will speed up your extraction efforts. We’ve also changed how certain genes apply traits so that you can stack effects together and create more diverse xenotypes. This is an ongoing tuning effort and we’ll be watching and dialing in the numbers to try to make gene-modding useful, moderately costly, and narratively-interesting.

Polux tree seeds: These new special seeds can be acquired in a few special ways. They’re rare to find, but with them you can plant a polux tree at a place of your choosing. Collecting polux trees is a new alternative way to suppress and remove pollution (besides the atomizer) in the late game (after it builds up in the early/midgame).

Pollution dumping diplomatic responses: There are a variety of ways to deal with pollution - freeze it, erase it in the atomizer, let polux trees neutralize it, just make less of it - or export it. We’ve added more depth and sensibility to diplomatic responses from other factions when you dump pollution off-map. Whether you’re dropping pods of pollution straight onto their homes, or dumping them off of a caravan, or launching toxic packs into the ocean, other factions will notice and respond more consistently and interestingly. At the most basic level, this means goodwill impacts. However, there is also a small chance of new faction retaliation in response to you dumping pollution in the world - they might send punitive attacks, or even drop some pollution back onto you. Together with the polux tree seeds, we hope that this will balance the choice between different pollution management methods and make that decision more interesting, while also de-emphasizing micromanagement-heavy strategies. It also adds a bit of narrative flair to have other factions respond directly to your actions.

Player-made xenotypes spawn in the world: Player-made xenotypes will now spawn in the world! Your customized pig/cat/dog hybrid no longer needs to be alone. Basically, in various random spawn situations like crash pod survivors or refugees, there is now a chance that the arriving person will spawn as any xenotype in the world. That includes modded xenotypes, as well as xenotypes created by the player. (Note: Not every player-created xenotype file is considered - only those if the xenotype is referred to in an ideoligion or the player used it for a starting colonist).

And the changelog below lists a pile of other smaller changes and fixes - go read it!

Does this break saves?

No, all saves are compatible back to 2018 at least (and in many cases before).

I love most changes, aside from the obvious integration changes it focused on I'm also very fond of the changes to drug resistance/immunity and the QoL/misc stuff. However, the bandwidth changes to lancers and scorchers are unnecessary IMO.

A lancer with 3 bandwidth is almost as expensive as a centipede at 4, but cannot possibly compete with it. There is a reason the lancer has a raid value of 150 and the centipede a whooping 400. Scorchers I found to be surprisingly good, despite their complete inefficiency against mechanoids, and the change cuts their cost in half. Bandwidth in general can be kind of awkward to work with since even the smallest possible changes to it have huge impact in the 1-2 ranges, so it might be easier to buff/nerf the mechs themselves instead like with the militor. Maybe give the lancer lower quality charge lances or lower shooter accuracy, and increase the scorcher's fire rate? Just a thought.

Units with different resource/supply costs are pretty common in strategy games. For example, in SC2 the roach is known to have a lot of power compared to its resource cost, but also be quite expensive in supply. This affects its strategic niche. It adds a bit of depth to the economic decisions short- and long-term as opposed to making the resource cost always exactly proportional to the supply cost.