Mysteries abound as a new round of Rocket Arena play begins, and Crater fills with eerie apparitions and mythical monsters. Is any of it real, or just figments of our overactive imaginations?

Figment or no, let’s say hello to the newest Championship Tour player, Leef! You can’t miss him -- he’s the one with a mask, furry tail, and tree branch-like antlers. Leef is rumored to be from Crater’s fabled Realm of the Ancients.

Exciting holiday events are on the horizon! The Gemstone Jungle will be celebrating its spooky holiday, All Crater’s Eve. What secrets lie in the Ruined City in the heart of the jungle?

Icefall Keep, Kayi’s home turf, will hold its own celebration, The Frost Festival. Keep an eye out for the festivities coming in Season 2 of Rocket Arena and join the fun! 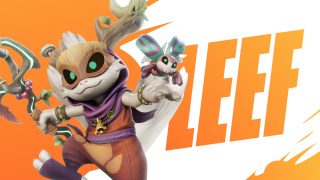 The Rocket Arena Championship Tour welcomes its strangest competitor yet -- Leef, an elfin critter with a long, furry tail, and tree branch-like antlers. Joining alongside him is Flitt, a tiny, flying critter who serves as Leef’s wingman, if you’ll pardon the expression.

In order to understand what’s up with Leef, you need to know a bit of Crater history, specifically, The Fables From The Realm Of The Ancients. These tales of heroic exploits in a sylvan paradise feature a race of small, fearless, enchanted creatures. So when Leef appears in the midst of the Tour Competition, the entire population goes cuckoo.

During game play, Leef uses what appears to be magic. His primary weapon, a mystical staff, flings Energy Rockets that explode on contact. Flitt flies rings around Leef’s adversaries, creating a field that ensnares them mid-air. Leef’s staff charges up when dealing damage with his Energy Rockets, at max charge unleashing a powerful beam attack. And Leef’s uncanny ability, which he calls Warp Dash, allows him to whoosh instantly in one direction, then another, to evade incoming fire.

In short,  Leef adds a strange and exciting new form of competition to Rocket Arena -- as long as he can keep the other players guessing at what he’s really all about.

Season 2 brings plenty of new ways to shoot rockets against bots with your friends. First of all, there are new bot types! Jayto, Blastbeard, Amphora, and Izell join in the Play vs AI playlist as AI.

Included in the Play vs AI playlist is the RocketBot Attack game mode and we’ve also added a New PvE Mode: Bot Knockout. In Bot Knockout, the new Competitor bots participate in the Knockout game mode, they can be both on your team and as opponents. If players fail to matchmake with other players, Bot Heroes will join your team to help you get into a match. No more going it alone!

In addition, teammates can now choose the same Competitor as one another in the Play vs AI playlist. We know there are times when players just want to pick a certain Competitor, be it for achievements, challenges, or even just because they love them.  With this change, players will have a playlist where they can do any or all of those things. 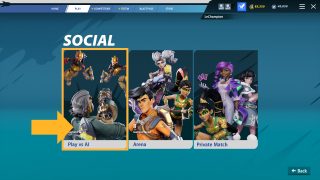 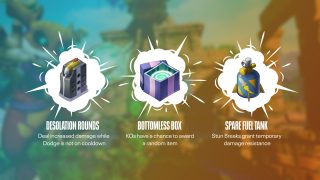 For collectors and achievement hunters, the max character level has been raised to 125!

Each character has an emerald gemstone outfit received by reaching Level 125 with them. 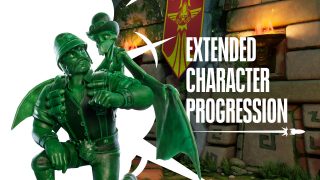 There are now more opportunities to get Rocket Parts (grind currency) and Blast XP! We’re increasing the number of challenges available with 3 daily challenges and 3 weekly challenges.

There are a ton of new gameplay, hero, and mode changes to get excited about in Season 2. For a few highlights, the Dodge ability has been enhanced and now allows for omnidirectional movement, so you can zip out of harm's way in any direction you’d like! Flux, Jayto, and Mysteen have had the biggest balance changes and coins give a speed boost in Treasure Hunt. In depth developer details about the Season 2 changes can be found in the Patch Notes. 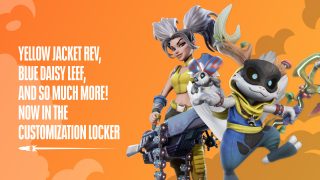 There are plenty of mysteries to solve, rewards to unlock, and challenges to complete coming in Season 2 on October 7th. Harness the power of Leef and Flitt, try out the new Rocketbot mode, and take your character progression to new heights. And get ready to celebrate the strange traditions of Crater when the events kick off later in the season. However you fare in the Rocket Championship Tour, you’re sure to have a blast. Thanks for playing!