We are aware Death Costs are an issue but it's a complicated topic due to how much gold it takes out of the game.

Wouldn't it be great if it was done in align with the story right now and had replacement content? 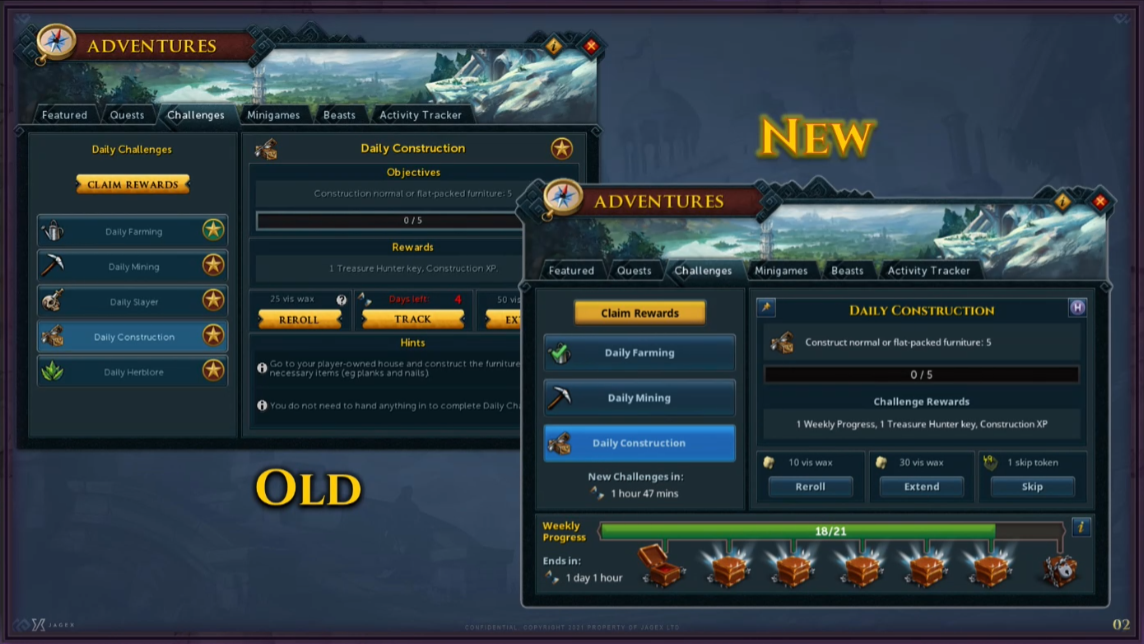 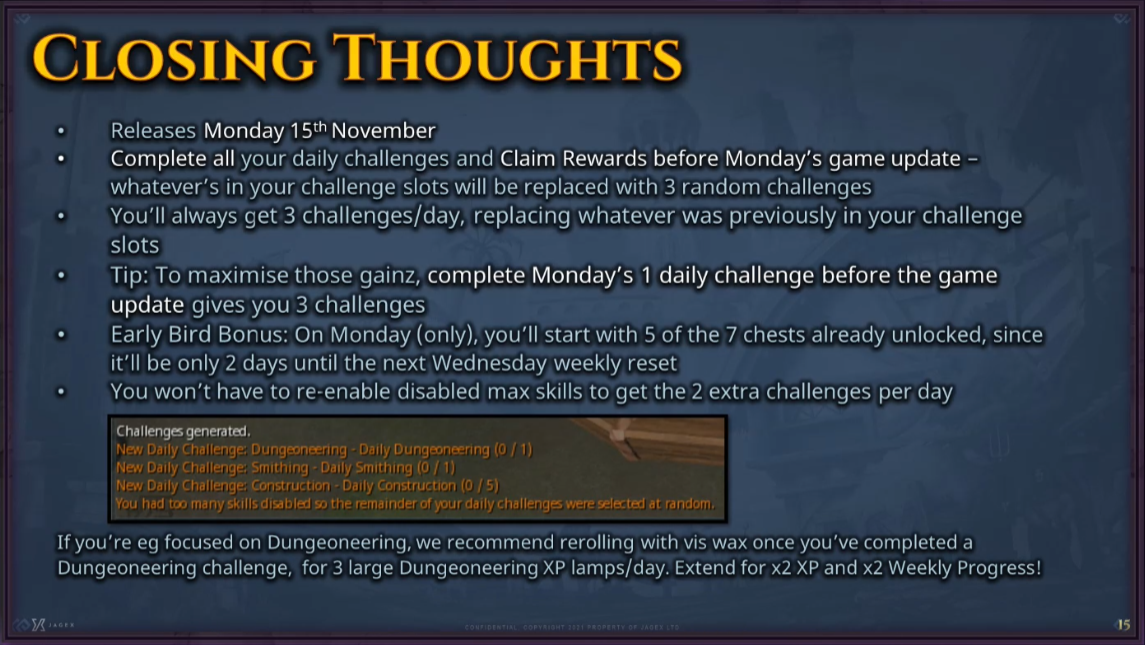 Once Upon a Time in Gielinor: Finale

The series takes Relomia through journey of a past, present, and future of being a Hero. This quest focuses on the future.

* Bad luck mitigation is applied guaranteeing you get after a certain period of time.

Cosmetics, Loyalty Points, and Premier Tokens will be obtained through a new 'Benefits' tab in the Marketplace.

In my opinion if 99 in a skill that goes to 120 is sufficient to enter the max guild then it should be sufficient to toggle the daily challenges.

Making all challenges toggleable at 99 even if the skill goes to 120 is a reasonable change. Mod Daze just proposed the same thing to us!

We've added it to our list to investigate on Monday. :)

Ultimately we'd like to do more with the rerolling/toggling mechanic to be more player-friendly and work better with Monday's additions, but were cautious of changing too much of the core mechanics at once.

Incidentally, agree with you about the max guild. I didn't walk in until I'd 120ed all the 120 skills, as I assumed I'd have to unlock every skill's level rewards to be maxed (only needing 99 Dungeoneering when it has level unlocks all the way to 120 surprised me).

I'm trying to get this through my dense head as well. Soo if your concentrating on one skill.. You will get less xp now right because lamp downgrade? But if your focusing on multiple skills this will be more overall xp because you get to complete more than one challenge a day?

Toggling maxed skills is still there and we didn't make any changes there (ultimately we'd like to either bring toggling into the Challenges interface or give you more freedom of choice if you're focusing on certain skills, but had to be reasonable about how much we changed at once).

Since you have 3 skills left to max, you're in a really good place as you've disabled all other maxed skills, so won't have to reroll.

Plus you'll unlock the weekly rewards in half the time, if that's your jam. (Might work well for you if you have other commitments and can only play certain days of the week.)

It also means you'll be able to complete/reroll those other challenges without losing anything as they all reset every day anyway.

So for your 50 wax you can extend once (30 wax), reroll one of the others into herblore guaranteed (10 wax) and then attempt to reroll the 3rd into herblore (50% chance, 10 wax). To get a total of 4x large lamps for the same wax cost. And of course you can always extend those extra rerolled tasks too if you have the wax to spare.

This is assuming there's been no mechanical changes to rerolls.

Currently there've been no mechanical changes to rerolls, other than reducing vis wax cost and removing the limit of one reroll per slot per day.

Personally not a fan of the spend-and-hope nature of rerolls (the more challenges we add, the less likely you'll get the challenge you want).

But we'll see how the feedback plays out as you engage with the latest changes, and respond accordingly. :)

That daily challenge update sounds like the most garbage change possible. They already don't feel worth doing. Jagex; fixing things that weren't broken since forever.

If they don't feel worth doing, that seems like a good reason to fix them?

with the increase in daily task, i can finally ask some friends to join, who have never played a single mmorpg. Daily tasks are great to keep people invested which otherwise would have been my job.

That's lovely to hear! Would love to know how your friends get on and how we could improve their interaction with challenges. Fresh eyes give us so much helpful feedback.

There's a whole new onboarding to basic challenges with this update, which also gives a broader introduction to core non-combat skills to complement Turael's combat path. Excited to hear how it plays out for them!

I'll certainly raise it while we're discussing the disable level cap, so your perspective is taken into account.

Potentially we could do something more extreme and replace blocking and rerolling with freely choosing a different skill, perhaps with challenge tokens (which I appreciate are no help to you since claiming the reward for the skipped challenge would give you undesired XP).

Another option is that combat challenges currently are rewarded in the form of an XP lamp, so we could potentially do the same for Summoning and Prayer challenges.

In the meantime (since none of that will help you on Monday), rerolling to work around undesired skills you can't block is significantly cheaper (only 10 vis wax) and unlimited.

Not sure if you've been involved in the massive community discussions in this thread https://www.reddit.com/r/runescape/comments/pvcjsa/now_that_curses_will_no_longer_require_29_defence/ but if we can get a consensus from the pure community to add toggles to explicitly block XP in undesired skills from every source, I think it would address the issue at its root, so that individual content wouldn't have to convert its XP to discardable lamps (which gives you the choice on a case-by-case basis but adds a step for both the majority who do want the XP, and the pures who want to throw it away).

Is onboarding in general going to get a fresh look? The path system was pretty darn confusing on my fresh Ironman, even as a 20 year player.

Also, once it hit the parts where it offers you branching options, it didn’t seem to return and offer the other branches. Kinda glitches out and disappeared.

Burthorpe is pretty fresh, but dialogue driven and serial tutorial island was a lot more straightforward in terms of introduction versus simultaneously learning the path system interface (which becomes somewhat irrelevant for players past this point?)

I don't imagine there'll be a drastically fresh look any time soon, but we chipped away at some content issues with Burthorpe paths before and after Davendale, so it might be better than it was, depending on the specific issues you had.

In terms of the whole path system interface and how you choose paths, I'd personally like to rip it all out and revisit the approach, and also rewrite paths at a foundational level to use the new engine-cached-config achievement system, which would allow me to create path content a lot faster.

Unfortunately that's a project in itself (the fruits of which will largely be rebuilding the Burthorpe paths we currently have with slightly better UX, thus a hard sell), so haven't had an opportunity to do so as yet.

Will have to see how the release schedule for 2022 pans out, but I have a feeling, if there's an allocation of acquisition resource, there'll be more of a shift in focus to onboarding returning lapsed players. Potentially might be able to negotiate a path system rewrite out of that, depending on overlapping needs. Too early to say. And I've probably said too much. >.>

I know this is kind of random, but is there any chance we could get an indication of how much worse a zuk kill is in terms of droprates if you use a checkpoint in nm/hm? I'm trying to figure out if it would be worth me doing checkpointed kills in HM over non-checkpointed kills in NM, and I can't really tell what the correct move is, given that I know it's worse to do kills with checkpoints. If not, is there any chance I could just get an answer to "given it takes me 2x as long to do a HM with checkpoints, should I do it over NM without checkpoints?", with answers being something like

I'd suggest tweeting JagexRyan or JagexKyle for info about TzKal-Zuk.

I've had my head down getting challenges out the door and work on a different team from those who developed the EGWD fronts.

Don't remove saving up daily challenges. How will you get skip tokens?

You get challenge skip tokens from the challenge progress reward chests.

Currently we give them out generously on the F2P track, but when players see the week's rewards ahead each Wednesday reset, I'm hoping we get your feedback as to how you might like the weekly rewards to be tuned. :)

Scrapping saved daily challenges and changing the rewards into loot boxes? Have I got that right? This seems like a massive downgrade.

To hopefully clarify, the 7 reward chests are a layer on top of the challenge gameplay with which you're familiar.

(Though we've also tuned each challenge to be shorter-form and removed some of their complications, so hopefully there's now more reason to complete them than store and ignore them.)

And even so, the weekly reward chests usually contain a steady cadence of challenge skip tokens to feed back into the core loop, so that's another way you can deal with a challenge for a skill you just don't like.

You not only still get the rewards from completing the challenge, but since you now get 3 challenges a day, if you complete them all, that's 3 TH keys (if members), 3 large lamps, and 3 Weekly Progress.

Previously you got 1 TH key and 1 huge lamp per day, so in my opinion, it's a net win.

If you happen to have vis wax to burn and want to be crazy efficient, you could extend (for nearly half the vis wax you previously paid for an extend) up to 3 of them for 2x XP and 6/21 Weekly Progress from a single day. Probably not sustainable in the long term, but good for short bursts, particularly if you need to get your reward chests unlocked in half the time due to other commitments.

I should also emphasise, the 7 reward chests don't give random rewards like a loot box - all the rewards in the chests are fixed at the start of the week (from a cycling rota that applies to everyone), and you can view them ahead of time to plan out how much you want to engage (and share the knowledge and strategise together). All players (mostly) get the same rewards. (There's a little bit of substitution eg to replace rewards ironmen have said they don't want with oddments, and each chest has a F2P reward and a members reward.)

So before, an ironman getting 90-100 vis wax daily would be capable of extending their daily challenge and their jack of trades aura everyday.

Now, even if they got a perfect 100 daily, they're limited to choosing between extending their daily challenges and refreshing their aura.

Any chance we could get daily vis wax cap increased to 150 (50 per slot) to counter this?

It's a tricky line to walk, because by extending, you can get significantly more XP most days than the previous system, which was already quite generous.

So we need to determine how far we can push the balancing. We're considering our options.

Thank you for your feedback!