Coming to Kickstarter on the 31st of May.

We went in with most of the development done rather than a complete game to leave us some wiggle room for feedback. 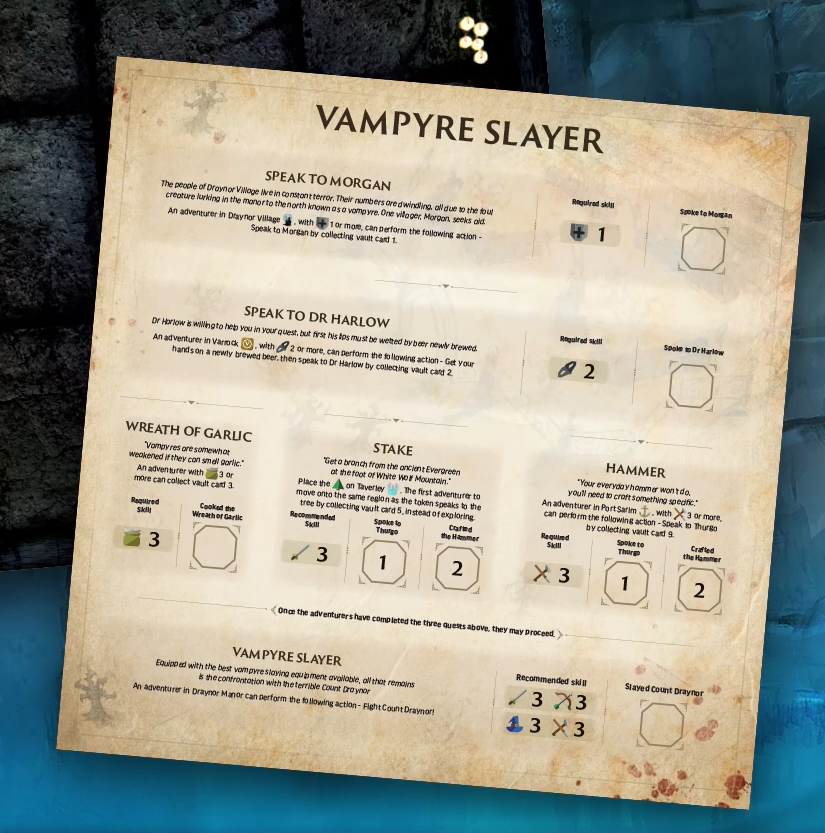 Took the narrative content in the video games and turned them into campaigns. 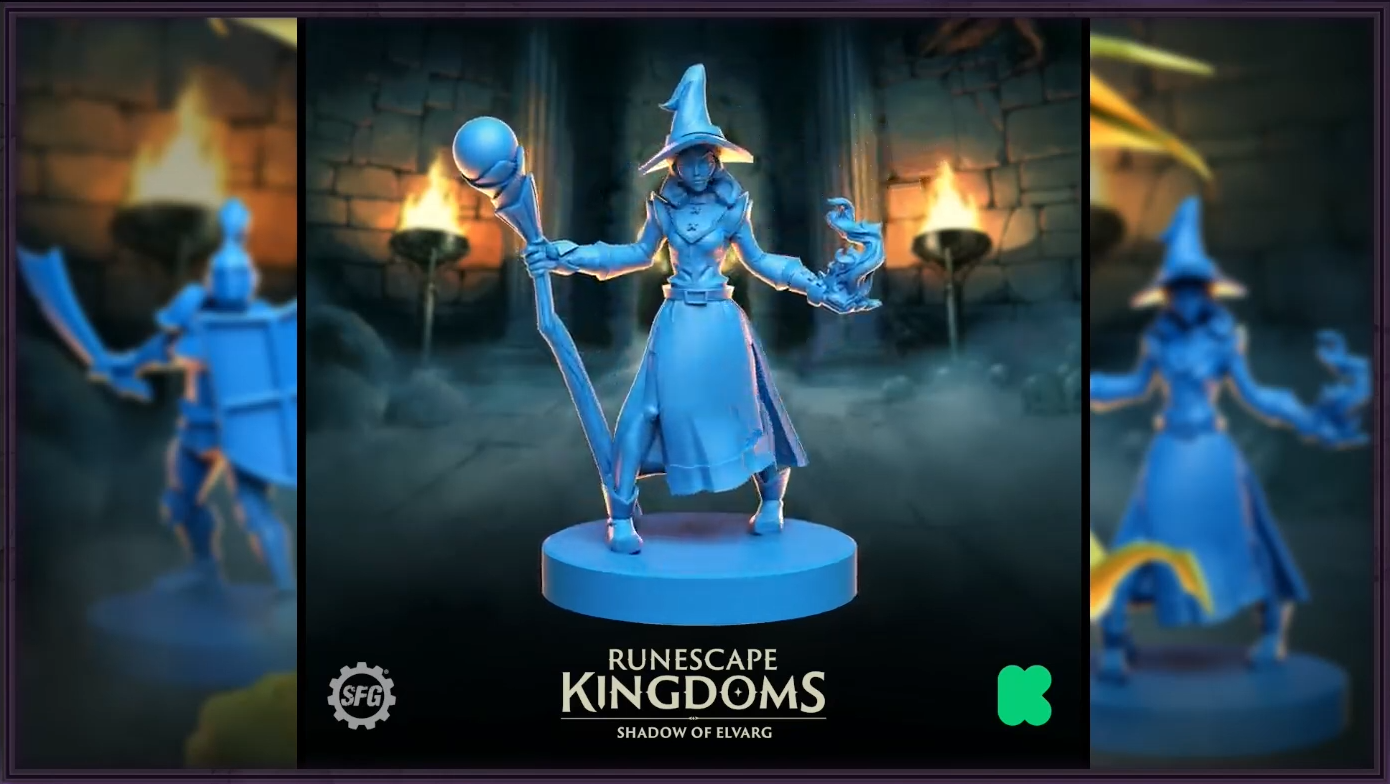 We've been through several iterations on the miniature art style and tried to make them feel familiar but unique.

Within the video game there's a hard barrier where you need a requirement before you can do something, but for the board game we've taken a soft barrier approach. The higher your level the higher chance of doing something successfully.

Create a new skilling method which requires Extinction to drive people to do the quest, whilst being a pallet cleanser from all of the the serious storytelling before the next storyline begins.

Thank you for your continued TL;DW efforts, Rubic!

they arent even considering changing how insanely fast arrows are consumed? the f**k?

I think there was a little lost in translation here. (Admittedly doesn't help that I speak very quickly and Mod Abe's mic was a little soft.)

The third point seems like it should be "Rebalance arrow component *consumption*".

Also, "Plan A-C" suggests that we're going to choose one of these approaches, do that, and call it job done.

The aim is to tackle these phases in order, as they're closely inter-related issues that build upon each other.

There's a lot of levers we can pull here, but if we go straight to pulling the demand levers, that means they have to over-correct existing flaws in supply, which are worth addressing in and of themselves.

The reason we're not going straight to reducing arrow consumption is that the arrows are another layer on top of a pre-established foundation of asynchronous supply.

The amount of resonant anima of Bik per hour supplied from Croesus is already significantly lower than the other EGWD generals (and is likely to worsen more over time given group content is a barrier of collaborative logistics - the more shiny new content gets added to the game, the harder it'll be to get a group together).

There's quirks like the Arch-Glacor doesn't provide resonant anima in hard mode (because at the time, it wasn't a worthwhile drop as there weren't any persistent uses for it).

By first stabilising the imbalanced supply of resonant anima (which means buffs to specific resonant anima sources, yay) and letting that filter through the player-driven economy, getting data to make informed decisions about balancing a living trade-beast, we then have a more stable foundation to tune the demand levers (like arrow consumption).

Also, thanks for describing our intent, yuei2. Succinctly put and you saved me (even more) words. :D

I don’t want to sound rude, but:

Is there any reason why someone in-house at Jagex couldn’t publish streaming notes? I don’t think I’m alone when I say I seriously miss back when we got BTS articles on the website.

I’m not one for streams. Having to visit Reddit to find a summary written by a player doesn’t really feel like the ideal way to keep up to date on what’s happening.

We were publishing summaries of our live streams on the website a while back. (Time has lost all meaning since covid, but could've been last year? I think it was during EGWD.)

Since they were on the website, they had to be localised, as we do with all newsposts.

I'm honestly not sure why they stopped, but nowadays we are typically doing a detailed pre-release news post for headline updates on Thursdays/Fridays for players to digest over the weekend and direct to in marketing materials.

That's in addition to the newspost on Monday, which is already a whole lotta words to localise, on top of localising the ingame text for not just RuneScape but also Melvor Idle's updates, etc.

So maybe that's a factor. I'm afraid all you're getting from me is speculation as it's more of a Community Management question.

I really appreciated the level of detail in the pre-release newspost for this update, though!

Having it all in writing in one place sure beat trying to verbally frontload players with reams of info in a Twitch livestream, or trying to get all the info out for a recorded video without flubbing the take, and saved us a lot of repeat questions to answer on social media while live monitoring.

Are there any timetables for these balances? Next monday? Or do they take longer to implement?

Mod Abe has been working on the first phase since yesterday morning.

Cutoff for Monday's patch notes varies with the amount that's in Release Candidate testing, so even if it's implemented and tested today (particularly as yesterday was also sprint review day, which means today gives us an hour or two of dev time between sprint initiation meetings for our next project), there may not be time for it to be RC tested.

Launching on a Tuesday due to a bank holiday right at the end of a sprint cut into our post-release development window quite a bit.

Mod Abe has been working on the first phase since yesterday morning.

Cutoff for Monday's patch notes varies with the amount that's in Release Candidate testing, so even if it's implemented and tested today (particularly as yesterday was also sprint review day, which means today gives us an hour or two of dev time between sprint initiation meetings for our next project), there may not be time for it to be RC tested.

Launching on a Tuesday due to a bank holiday right at the end of a sprint cut into our post-release development window quite a bit.

Update: Plan A (I'd've preferred Phase 1 - but we're stuck with it now :D) above was implemented and reviewed on Thursday, completed testing on Friday, and is awaiting copy to the next Release Candidate build that has capacity for it.

So consequently a buff to resonant anima supply won't be in Monday 9th's game update, but hopefully the following Monday. (There's still a lot of surplus resonant anima in the economy, so it doesn't hurt to tempt hoarders for a bit with the opportunity to make bank for healthier circulation.)

Here's the patch notes for the Plan A release, so you know what's coming in the future:

Buffed supply of resonant anima now that it has sinks, particularly from the lowest supply (Bik, Wen)

1) Amounts of resonant anima earned from the following sources has been increased:

-TzKal-Zuk and his underlings (normal and hard mode)

We've got some other goodies on the way too. eg augmented tinderbox XP from the Firemaking eggtivities (in Monday's release build), crystal knife bonus affecting carestyling (same status as the resonant anima supply buffs, awaiting copy to a future release build).

Question about Arch Glacor hard mode resonant anima: Is it being added to the common/uncommon drops in a way that does not make getting rare drops any harder (i.e more rare)?

Edit: I would guess that to be the case, but want to make sure.

I've actually added it as a guaranteed secondary drop, so it should always be an addition that comes at the cost of nothing else. There is a couple of reasons for this: