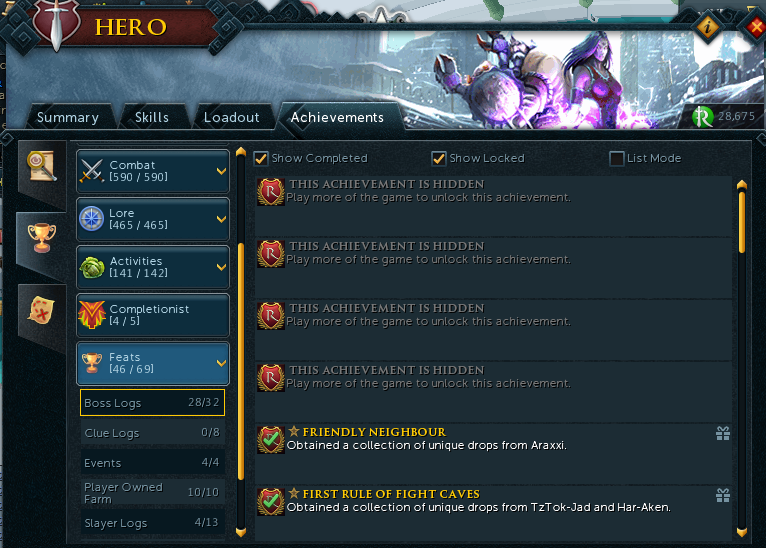 #31 Fallen Angel - Obtained a collection of unique drops from Nex - Angel of Death. You are granted the ability to use the title 'of the Praesul'.

#32 Insane Fallen Angel - Obtained all the unique drops from Nex - Angel of Death. You are granted the ability to use the golden variant title 'of the Praesul'.

When the word "insane" is used.....prepare to lose your sanity over the grind.

I presume that's why these item logs are hidden away as Feats. ;)

Thanks for clearing that up, didn't even think of gold praesul.

Already mentioned this before but they were hidden because the devs didn't want players to feel obligated to complete insane achievements. A lot of these achievements are just not realistic for the overwhelming majority of players, hell gold praesul is nigh impossible for a regular person, so seeing these achievements unhidden kills the idea of getting all achievements and ruins the completionist mindset of many players. It's like getting a new game and starting to go for the platinum trophy, only to see one achievement that's going to take hundreds of hours, so you don't bother getting any achievements at all.

They used to actually be hidden, like bonus achievements, and wouldn't add to the total unless they were unlocked, but with the current system you may aswell just give descriptions because it makes no difference, they are not hidden.

Thank you for explaining. That tracks with my understanding of their intended purpose.

We needed to balance that against the desire from other players for achievements to all be visible so achievement totals and RuneScore are consistent and trackable.

The middle ground solution that was taken was to give feats presence but hide the information until complete, to hopefully satisfy both parties.

I agree with you that, especially now the Feats are all in their own category, hiding feat information until they're complete is probably redundant.

I put the Feats into subcategories to help provide a hint, but that may not be enough.

Personally I'd like feat information to be visible. I can just choose to ignore the Feats category if I don't want to complete item logs. Hiding the info in-game just means I have to go to the wiki to get that information.

But are there players that prefer feat information to be obfuscated? Would other players with a different opinion be upset if we changed it?

I'd appreciate having a conversation about it and hearing the feedback ahead of time, so if we do reveal feat information, we don't get inundated with complaints from a silent majority and have to change it back.