26 days ago - /u/ - Direct link
A lil somethin somethin: You can find the details for this event on the announcement page here.
26 days ago - MrJordanAP - Direct link
We’ve done it. We’ve finally arrived at the spookiest of seasons! October brought all the ghouls, goblins and ghosts that any self-respecting pirate could ever want. After all, who doesn’t love the spiderweb/pumpkin aesthetic?

Taking its lead from the shifting seasons, Sea of Thieves also had an eventful month. You might have noticed that there was a brand new Adventure – or perhaps you were too busy getting ready for the later Tricksters and Treaters Event? What we do know is that with so much going on, trying to keep track of it all would test any pirate, so settle in and let’s review everything that went down in October 2022.

Content Update The big news in October was of course the arrival of ‘The Herald of the Flame’, Sea of Thieves’ eighth time-limited adventure[www.seaofthieves.com]. Players were treated to the return of the wily Stitcher Jim, finally emerging from his self-imposed exile with a menacing new look. Together with the Pirate Lord’s allies, players from across the sea came together to strike back against the Reapers and bring down their plans.

Putting down an undead and on fire pirate from an old prophecy feels like it should have been more than enough excitement for the month, but we weren’t done! Towards the end of October, we embraced the spooky spirit with an all-new Tricksters and Treaters[www.seaofthieves.com] Event. The task was simple: either act as a Treater, burying treasure for other players to find, or embrace the pranking as a Trickster and steal everything not nailed down on other people’s ships – all with exclusive cosmetics and Titles on the line.

And, lest we forget, the most important part of any spooky season: the costumes. The Pirate Emporium was flooded with new seasonal cosmetics, including the ultra-slimming Spinal Costume[www.tiktok.com]. After all, why fight with the skellies when you can become one? For any players partial to a bit more coverage – or, you know, skin – the Graveyard Gladiator set offered a nice, fleshy alternative. Wait, that came out wrong. Look, free pumpkin juggling[www.facebook.com]!

News and Features With ‘The Herald of the Flame’ Adventure to explore, we of course dropped a new Adventures Ahead[www.seaofthieves.com] article to remind you of the tale of Stitcher Jim. We weren’t about to let the seasonal spirit go unsung either, so the latter half of the month saw both an eerie Emporium sale and the release of the new ‘Spooky Selects’ soundtrack entry. Remember, drifting through the cold moonlit waves, accompanied only by ghostly shanties of long-gone pirates, can absolutely be self-care and you shouldn’t let anyone tell you otherwise.

The Community Hub got no less than three sets of updates on what our crafty community have been creating, and as always, we had fortnightly Spotlights throughout the month. We started with a Creator Spotlight on renowned Twitch privateer Kaidawrath[www.seaofthieves.com], speaking about how her platform grew from humble origins. Then for our Community Spotlight we turned to TheCloudBee[www.seaofthieves.com] to discuss her charity work and what it takes to become a fearsome helmswoman.

Continuing the charity theme, Sea of Thieves teamed up with SpecialEffect on October 7th to help level the playing field for gamers with physical disabilities. For #OneSpecialDay, we donated 100% of Sea of Thieves’ net proceeds on Steam to support their incredible work. Thank you to everyone who got involved and helped to raise money for the cause! 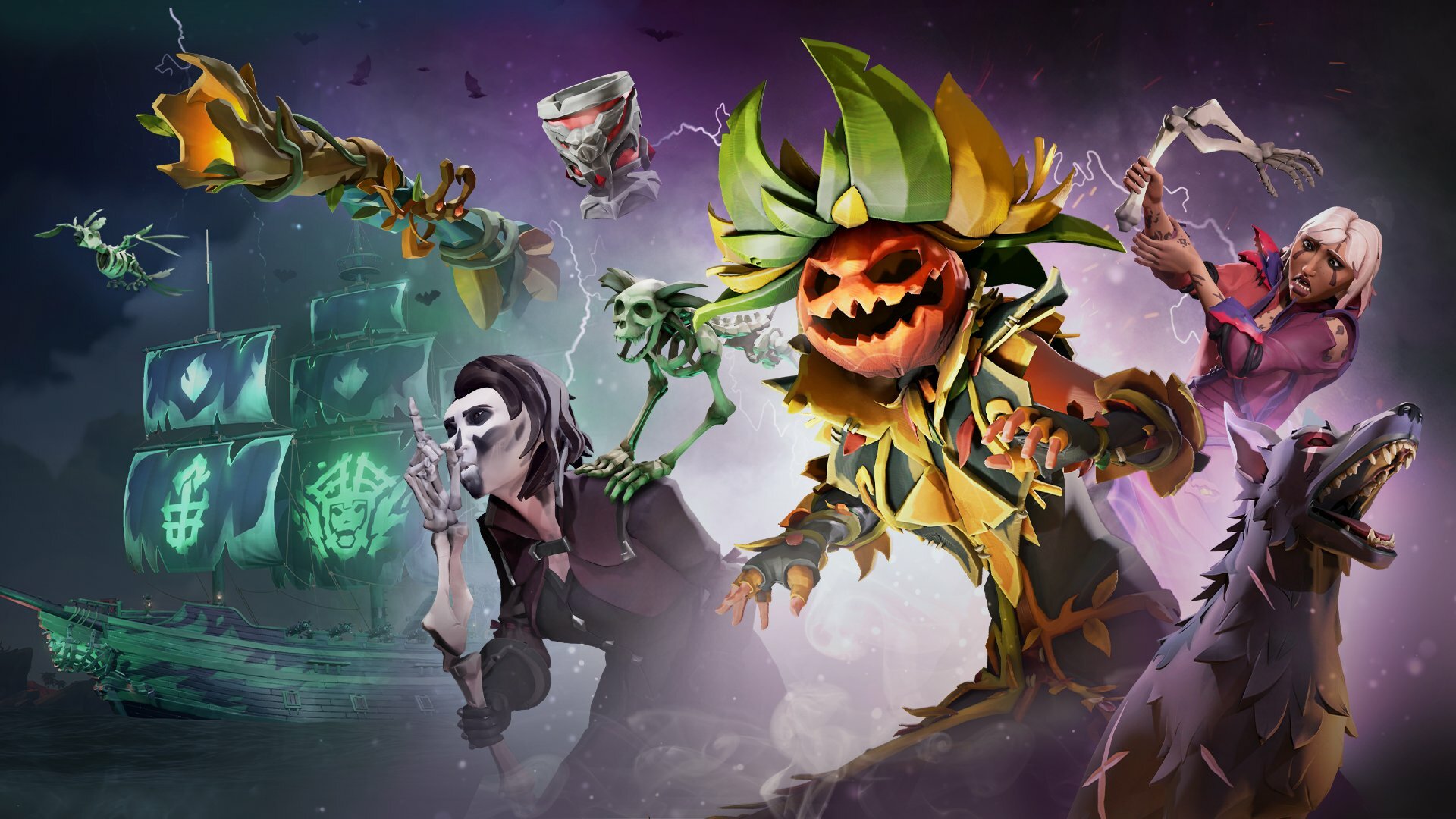 Videos and Streams We couldn’t kick off a new Adventure without giving you some trailers, could we? ‘The Herald of the Flame’ cinematic trailer landed early in the month, with the launch trailer just a few days later. Before you had a chance to rejoice and/or dread the return of dear Jim, episode 9 of the official podcast also dropped to answer some of your burning questions and offer up hints about what’s in store for Sea of Thieves’ future.

With the Tricksters and Treaters Event rapidly approaching, John couldn’t resist giving us a spine-tingling edition of Sea of Thieves News. Then once the Event landed, we turned our attention to Twitch and the Tavern of Terror stream[www.twitch.tv] to watch as our assembled crew scrambled to uncover a traitor in their midst. There was… mixed success. (Seriously though, is that horizon advancing too quickly for anyone else?)

Twitch Drops once again made their mark in the middle of the month, and on October’s very last day we casually dropped the first trailer for the Adventure awaiting in November…

Social Channels Way back in September we got fashionable with the first ever #StyleOfThieves[www.instagram.com] competition, and October brought things to a generous conclusion for its debut Season. Piracy has never looked so good. Elsewhere, we raised a toast to Age of Empires as it celebrated its 25th anniversary, building the team their very own ship with a unique colour scheme and inspirational name[knowyourmeme.com].

Now, deep breath. Lots more to cram in. Okay? Go. At the start of the month, we invited you to get into the spirit and it took off from there. For the artistically minded, there were two seasonally themed #SoTShot challenges: Striking Skeletons[www.instagram.com] and Frightening Photos[www.instagram.com]. Arrt Club prompt attempts were made in-house, while over on TikTok, our sound designers tried out something a little different[www.tiktok.com] for our Megalodon friends.

Our #TriviaTuesday bursts helped to fill in some background on the ‘The Herald of the Flame’[www.facebook.com] Adventure, while an impromptu geography challenge ended with a surprisingly in-depth discussion about apostrophes. Players’ treasure-burying alignment was called into question, and of course the other side of the Tricksters and Treaters Event coin was the opportunity to send us a tweet and get tricked or treated by the Jack O’ Looter! 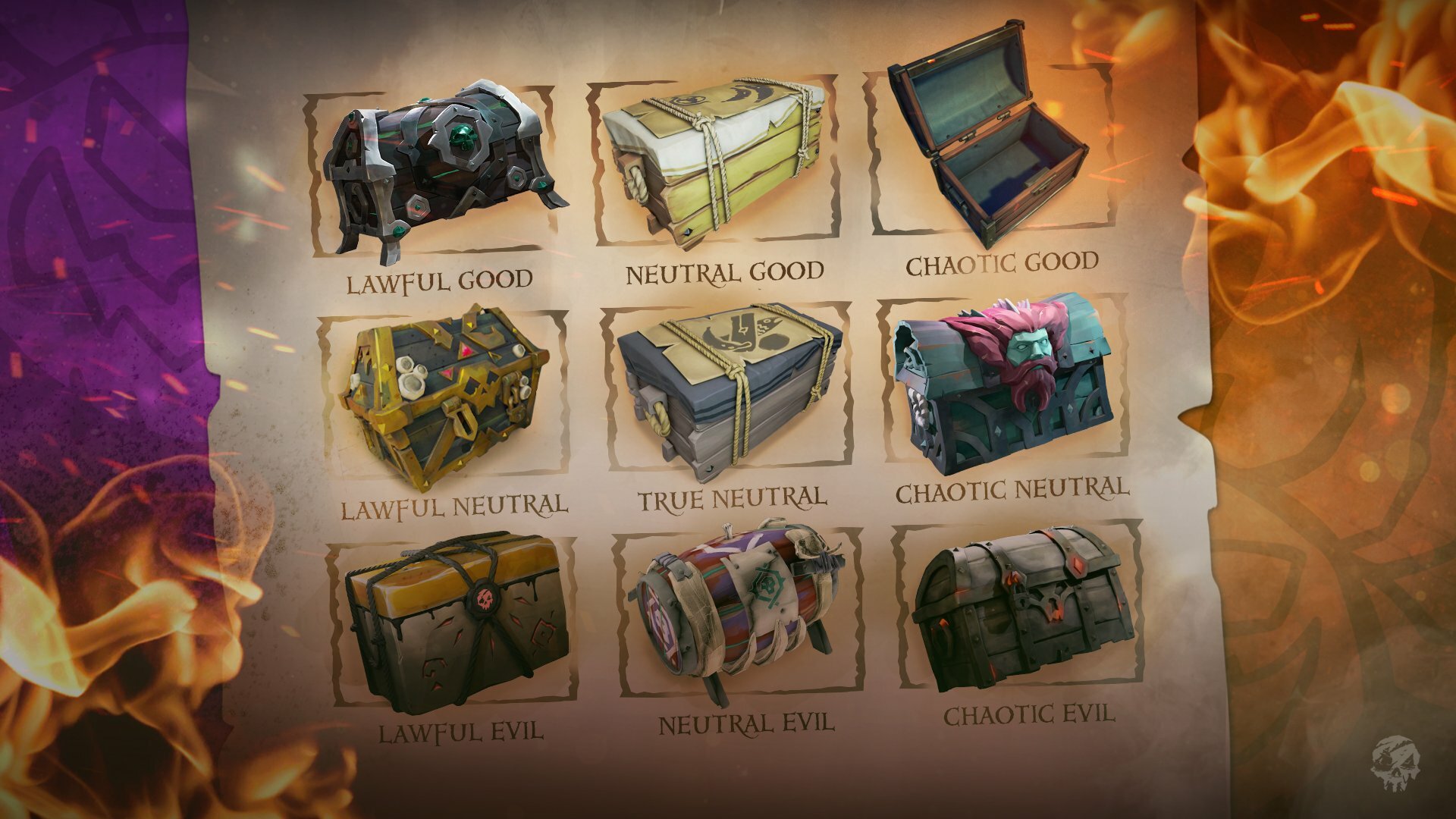 So that was October. Phew. What a month. Did we miss anything? If any of this passed you by, don’t forget you can keep up to date with all Sea of Thieves news as it happens by following us on Twitter, Facebook[www.facebook.com], Instagram[www.instagram.com], TikTok[www.tiktok.com], YouTube or Twitch[twitch.tv], or joining the official Forums[www.seaofthieves.com] or Discord[www.discord.gg]. This month’s already shaping up to be packed with goodies of its own, so stay tuned, stay spooky and have a great November!