19 days ago - /u/ - Direct link
A lil somethin somethin: You can find the details for this event on the announcement page here.
19 days ago - MrJordanAP - Direct link
Every month brings the proprietors of the Pirate Emporium fresh shipments of goodies from beyond the Devil’s Shroud, while every Season also brings pirates new rewards to aspire to by raising their Renown. But you may ask yourself, how do these shiny ship liveries, wicked weapons and the like actually get made? Not within the lore of Sea of Thieves, but outside it – how do these cosmetics go from an idea in someone’s head to something you can hold in your (digital) hands?

Well, knowing you love a peek behind the curtain, we talked to various teams at Rare to track the journey of a cosmetic item – from its initial concept to its eventual appearance in the game, whether that’s in the Pirate Emporium, Plunder Pass or the reams of free rewards available for climbing the progression levels of a Sea of Thieves Season.

Naturally, we had to pick a suitable candidate for this inaugural behind-the-scenes feature, and it only seemed right that the fan-favourite Snowbound Ship Lantern – ‘The Orb’ to its ardent admirers – should be our first subject. Not only did it capture the hearts and minds of players, it provided some unique challenges for our crack team of artists and animators to bring to life…


CONCEPT Let’s start at the very beginning with the concept phase. The Snowbound Ship Lantern was to be one of the rewards earnable within Season Five, which ran over the Christmas period, inspiring items that evoked a wintry feeling. So a lantern that doubled as a snowglobe was a compelling idea from the outset, but it was always going to be a challenge, as Principal Concept Artist Victoria Hall recalls:

“Having a snowglobe was a natural fit for a seasonal item, but when we pitched it to the other teams, we weren’t sure if it would be technically possible. After discussing it with the Tech Art team, they managed to produce a version that worked!”

The concept work was done by Senior Concept Artist (and snowglobe enthusiast) Ine T'Sjoen, who remembers its creation with great fondness:

“The Snowbound Ship Lantern has been one of my favourite items to work on. Who doesn't love snowglobes? When the idea first popped up, we knew it would be a bit outlandish, because we've never put images inside lanterns before. It was a bit of a gamble to pitch it, but we knew it had the potential to delight a lot of players. Which is what concept art is all about: putting some wild ideas out there. I was so happy when the Tech team was on board to try make it happen. But I never expected people to be so fully drawn to The Orb. Even I underestimated how much our players love snowglobes!” 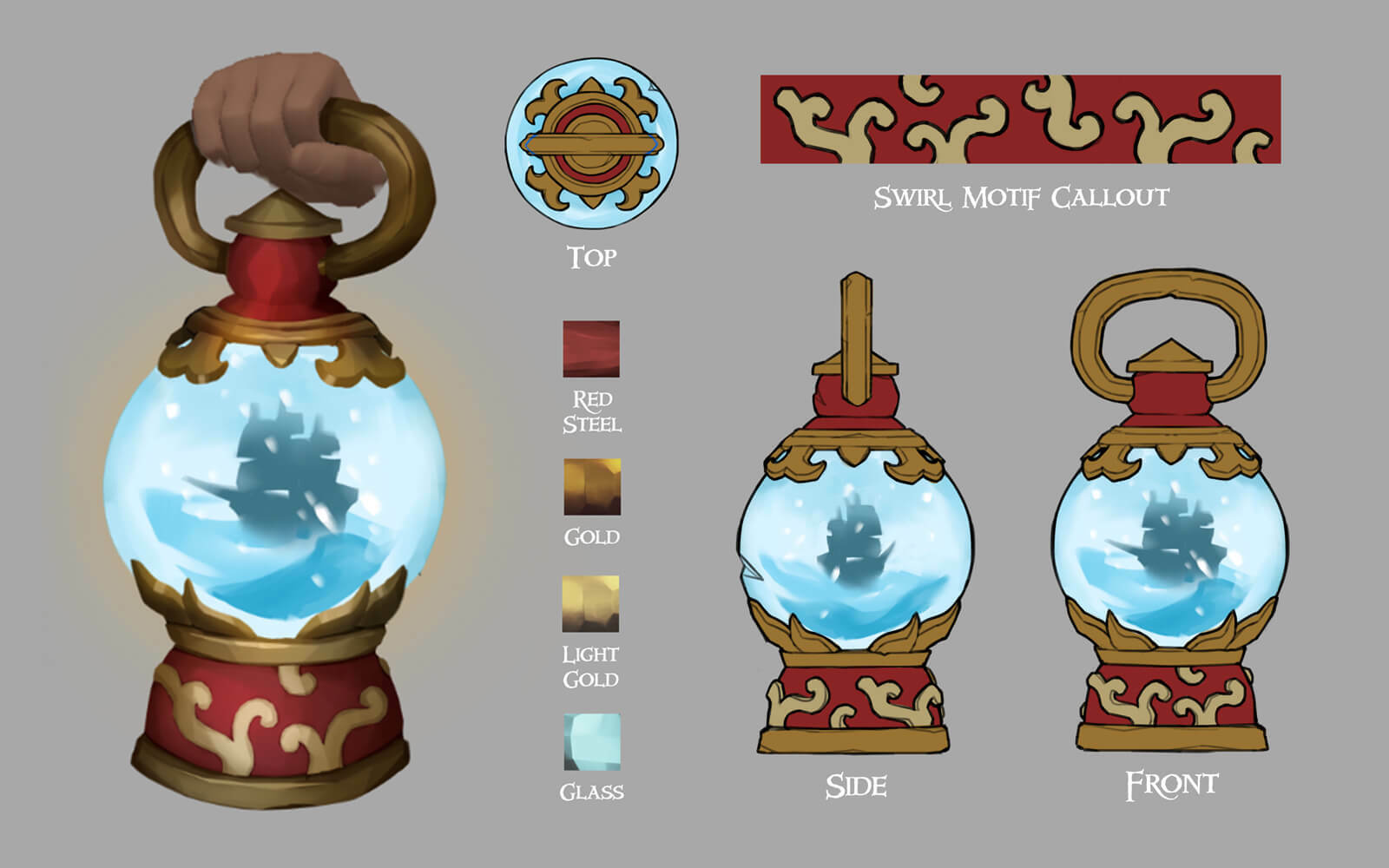 So we had our concept, and we knew it would be one of the Seasonal rewards that players could earn for free by playing the game and raising their Renown – but what are some of the other deciding factors for progression rewards? We talked to Louise Roberts from Rare’s in-house Production team:

“As the Snowbound Ship Lantern was being delivered to players through Seasonal progression, we had a very wide target audience for this one, and wanted it to serve as something that would encourage players to work their way through Season Five to earn it. We tend to have a bit more fun and go a bit more ‘out there’ with these reward items, as they’re slightly different to items for which players have to make the decision to part with their hard-earned gold.”


CREATION With the concept and its place within Season Five progression’s track locked down, we moved on to the task of getting this frosted lantern in-game. Creating the 3D model came next, a task managed by Hannah Smith, Joachim Coppens and others on the Sea of Thieves Environment Art team. As we found out from chatting to Principal Environment Artist Andy Betts, the modelling stage was surprisingly free of hurdles:

“The Snowbound Ship Lantern looks awesome, but that’s mainly down to the VFX it uses. From a 3D creation perspective, there was no real difference between this and other lanterns that the 3D teams have made. They all use an effect of some sort to show off the glowing nature of a lantern, so we just ensure this area is a clean canvas, so to speak, to allow our Tech team to do their work. On this particular lantern we just needed to make sure the glass had some surface detail, and the rest was up to the VFX team.” 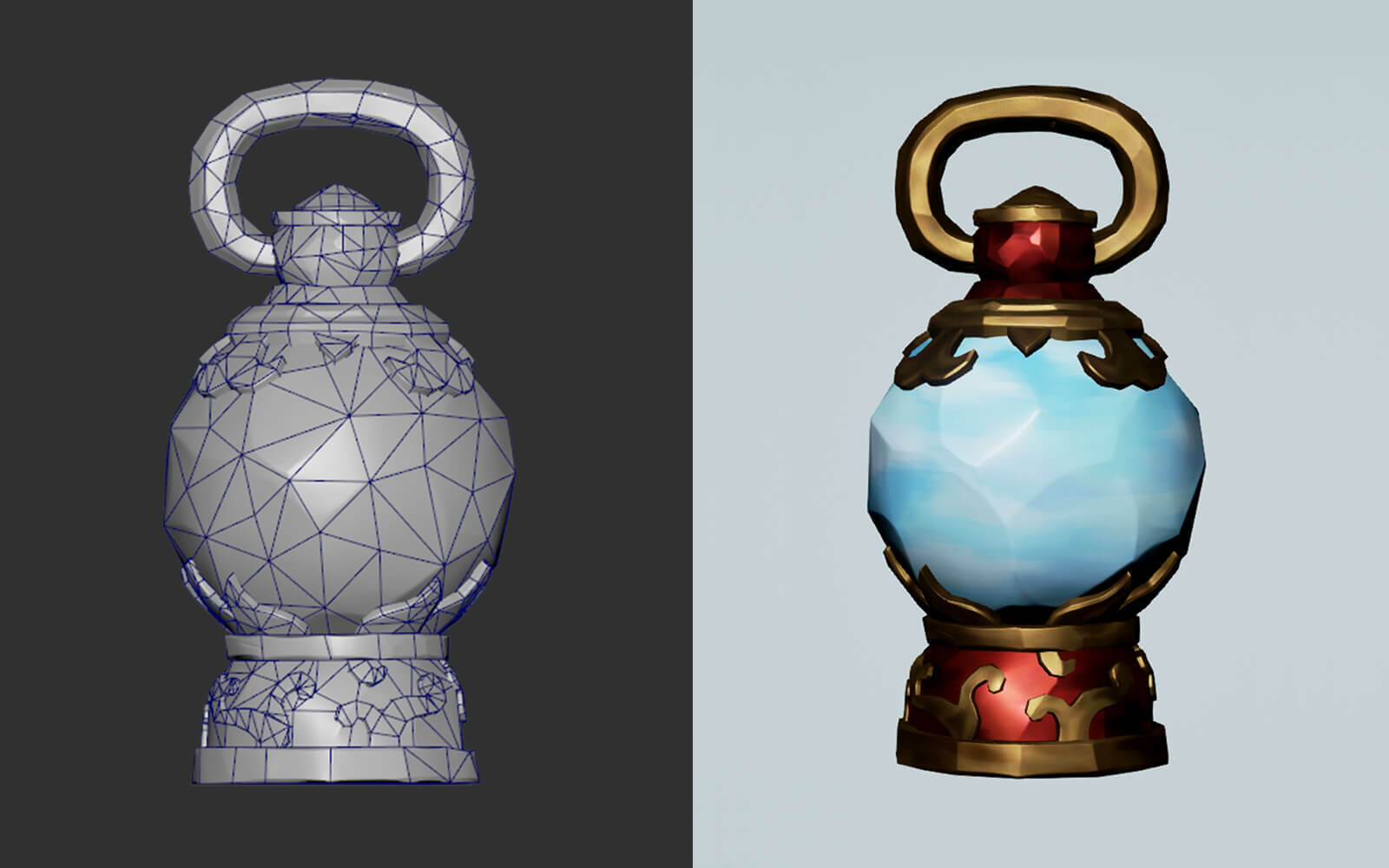 As mentioned by both Victoria and Andy, the next test would be turning a standard lantern into a snowglobe – complete with falling snow, bobbing ship and a unique frozen glow. Thankfully, our Tech Art team aren’t ones to back down from a challenge. As we heard from Lead Technical Artist Andy Catling, there were so many other features to consider when creating The Orb, turning it into a real challenge from a VFX standpoint:

“This was probably the most complex shader we’ve used on a lantern. Most of our lanterns use projection effects in the shader to give the illusion of something inside the lantern. For the standard lantern, that’s just an animated flame texture, but for this lantern we really went to town, using ray-traced intersections with multiple planes to build up the layers of the snowglobe scene.

“The layers were animated using sine waves to give the subtle rocking motion of the ship and waves, and we used refraction from the glass to bend the ray-trace. For the finishing touch, we added multiple projected layers of swirling snow. The lantern is also quite unique in that we added additional logic to reflect the motion of the player in the movement inside the lantern material. For this, we tracked velocity and increased the agitation of the snow and other elements accordingly.”

“As with our other lanterns, we needed to change the colour based on Flames of Fate. We have pre-set colours to switch between, but the default needed to be blue without muddying any of the others. We used vector length to figure out when the Flames of Fate value colour was closer to black and switched to blue instead, all while constraining the Flame of Fate colours to a tighter value range, as some were much brighter than others.” 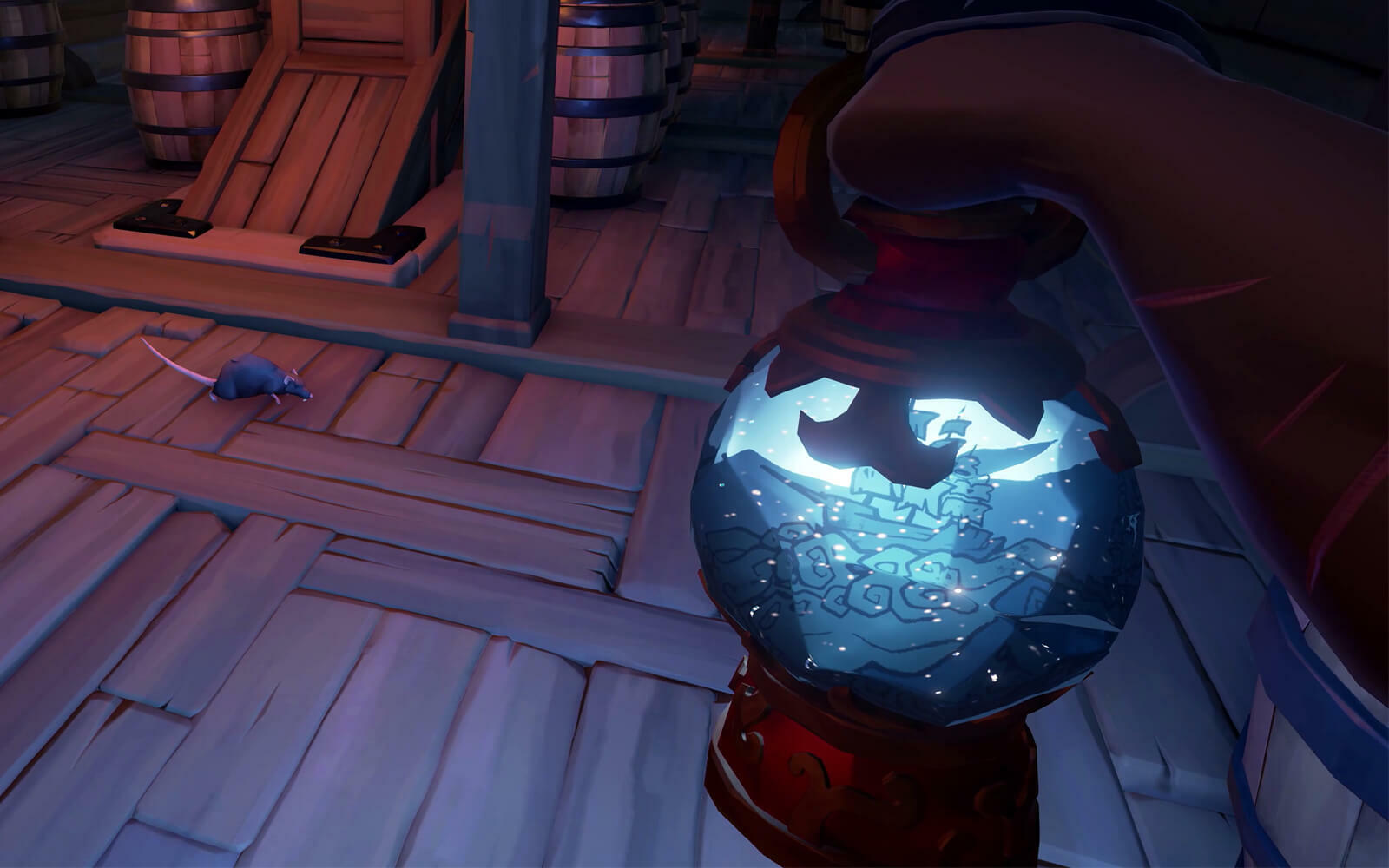 Great – our lantern with all its bespoke effects was rigged up with the lighting working correctly in-game. Next thing to do was formally name it! The lantern had a placeholder name throughout this whole process, so as it went into the monthly text tracker alongside the other items, it was the turn of our Editorial department to weave their word magic and create something that fit within the Sea of Thieves world. For Season Five it frequently fell on loremaster Chris Allc*ck to conjure up names and descriptions, and as the Season had a snow and ice theme, there was already a rich pool of ideas to draw from:

“Most items come as part of a set, so how long their descriptions take to write depends on how quickly you can latch onto what makes the set unique and interesting and think of ways to play with that – for example, Season Five introduced the Bell Brigade set, which was themed around smartly dressed soldiers but also the holidays and keeping warm in winter, so there was a lot to pull from and the set was finished pretty quickly. Rewrites are relatively infrequent because we're all experienced professionals, and because I have no qualms about setting Smiley the Ravenous Crocodile on anyone who dares question my wordly wisdom.”


RECEPTION Once the Snowbound Ship Lantern was in-game, all we had to do was wait for you rapscallions to get your hands on it. Obviously, we had no idea that this festive lantern would transform into The Orb, leading to our surprise, delight and fear when the community started a mini-cult around it. For Andy C, seeing people take an item he helped make and run with it was a thrill:

“It’s really great when players appreciate something you’ve worked on, especially when there has been so much work put into making it. I would often spend quite a bit of time looking through Twitter for people posting about this lantern.”

“It was incredibly fun to see so many players form the ‘All hail The Orb’ chant, and I saw that someone even made a parody Twitter account for it – that kind of thing really makes me feel like we’re contributing to the player experience!” 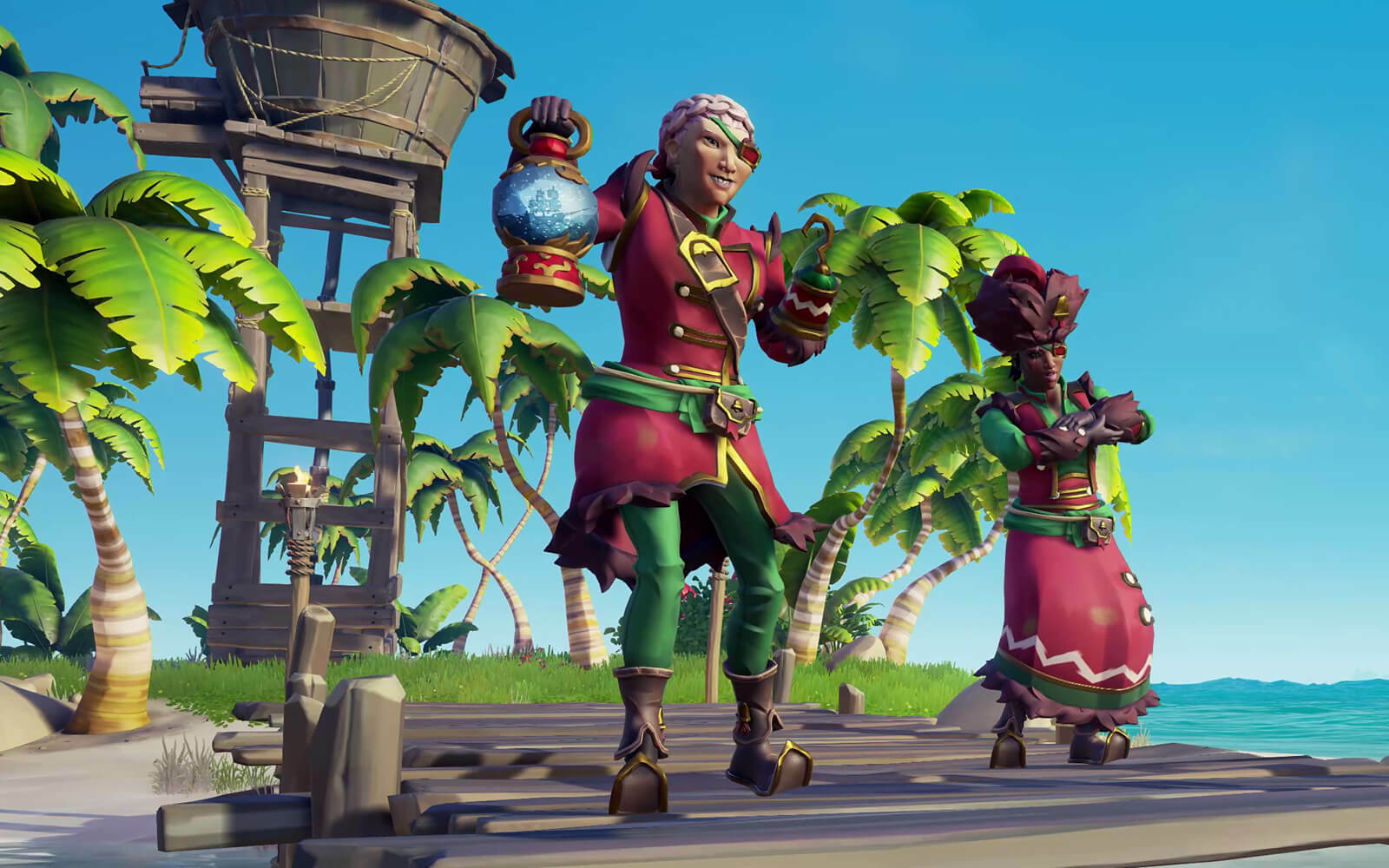 As Producer Louise enthuses, seeing players respond positively to an item that the team themselves really enjoyed creating is what makes all the work worthwhile:

“The Orb was a favourite throughout its development in the art reviews, it’s a lovely thematic item and the team really brought it to life. I didn’t initially know about the plans to use it for the {LINK REMOVED}lore teasers and raid stream, which I think added massively to its significance to the community!”

Back at its birthplace on the Concept Art team, Victoria agrees:

“We had no idea the community would find such an affinity for it! We always thought it would be a cool idea though, so it was a pleasure to see it received so well.”

And thus ends the story of The Orb’s creation – from its initial concept as a normal Seasonal reward to becoming the figurehead for a cult of winter prognostication. However, a couple of questions remain. Yes, we know how The Orb physically came to be in the game, but what does it want? Who created it within the world of Sea of Thieves? Has The Orb used its mysterious powers to make us write this article about it? We tried to reach Chris for an answer, but all we received was this hastily scribbled note:

“I heard it has a mysterious connection to ghostly sunken ships…” 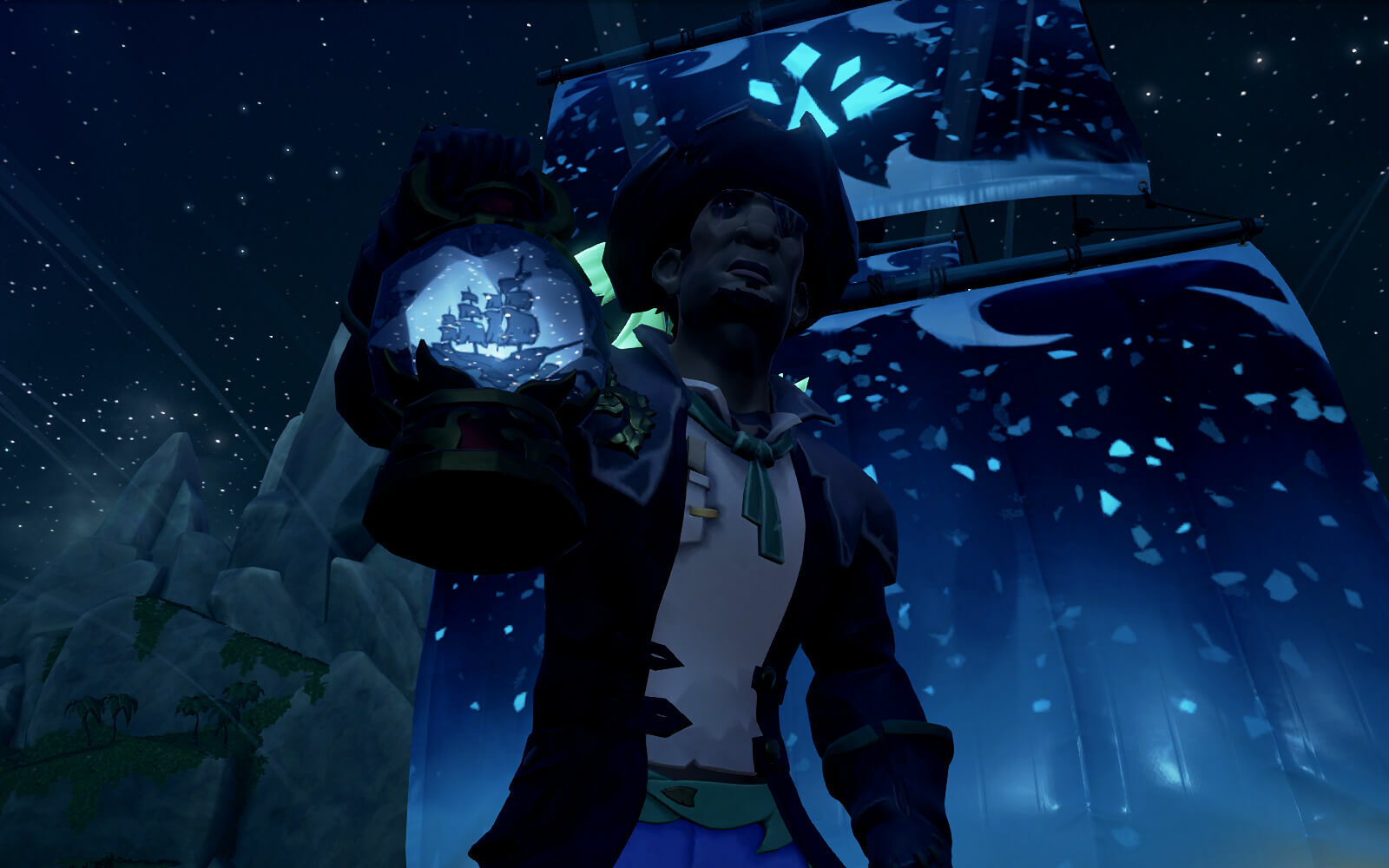