22 days ago - /u/ - Direct link
A lil somethin somethin: You can find the details for this event on the announcement page here.
22 days ago - MrJordanAP - Direct link
The cannons have silenced, the portals have closed and the Veil of the Ancients has once again been hidden away. Thanks to the valiant efforts of pirate crews willing to venture into the Sea of the Damned and save Merrick[www.seaofthieves.com], the Dark Brethren have been routed and their plans left in disarray.

Belle[www.seaofthieves.com] insists that Merrick knows more than even he realises, and while it’s still not clear what information the Brethren hoped to gain from their pugnacious prisoner, his interrogation appears to have been interrupted just in time. But where does all this leave our luckless Hunter – and who else might have taken advantage of recent events to further their own schemes?

Shark Tales Merrick’s more familiar than most with the many perils of the pirate’s life, having lost several limbs in a mighty battle against a terrifying Megalodon aboard his ship, the Killer Whale. (His eye, conversely, was claimed by a particularly aggressive parrot, but that’s not a story he tells as often.)

This reckless streak caused no end of domestic strain between Merrick, his spouse Serik and their extended family, but reconciliation proved possible when Merrick settled down at a Seapost to represent The Hunter’s Call and live out the rest of his days as an unassuming trader. At least until Belle came calling…

Time spent sailing alongside the old salt during the events of ‘The Shrouded Deep’ has convinced Belle that Merrick either knows, or gleaned from their conversations, more than he should. It was certainly knowledge worth killing for, as the Dark Brethren tasked Amaranta[www.seaofthieves.com] with ending Merrick’s life and casting him to the Sea of the Damned, where her cohorts were waiting to ensnare him. 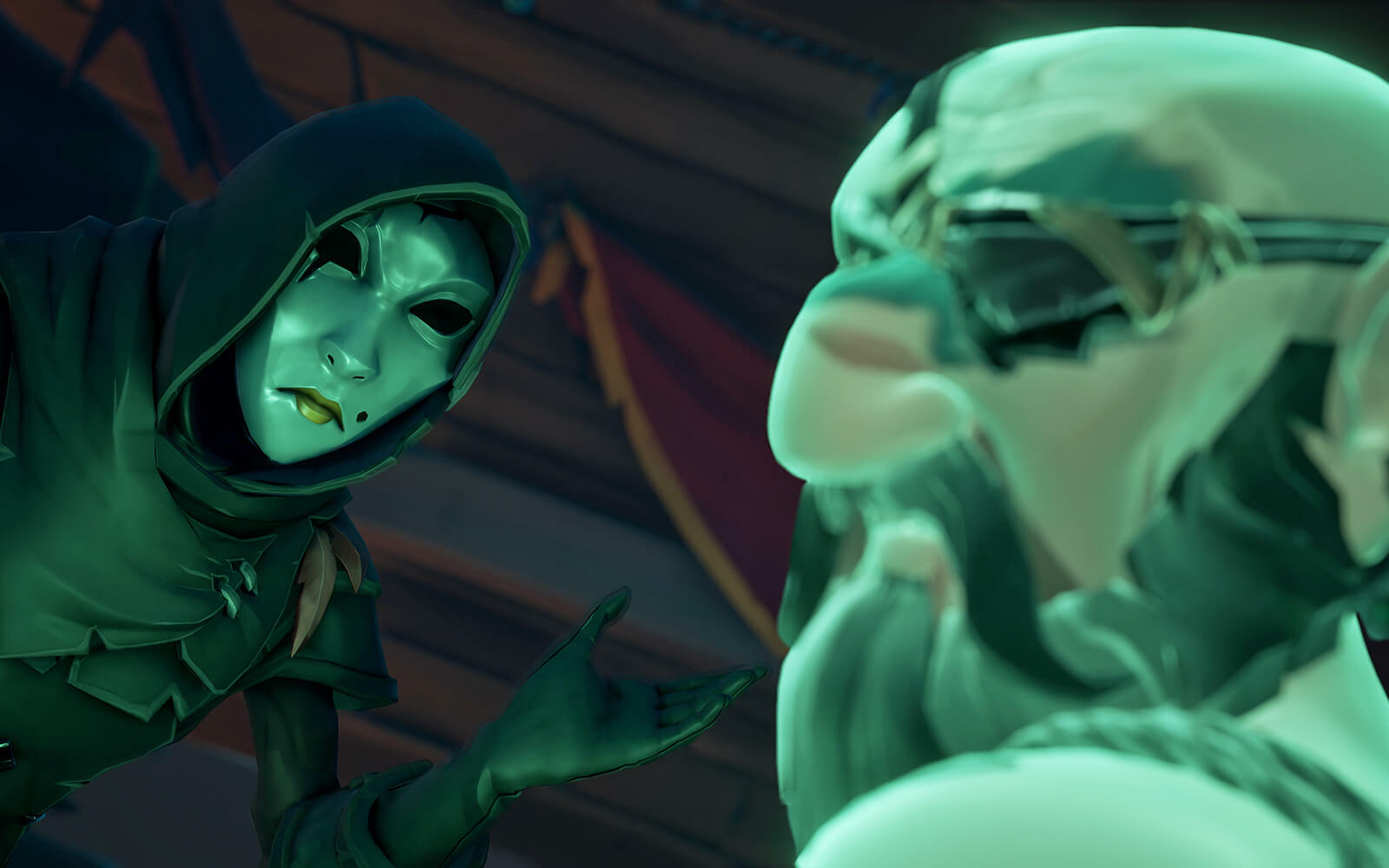 Bar Brawling Unwilling to let Merrick’s secrets fall into the wrong ears, the Pirate Lord[www.seaofthieves.com] was convinced to make use of the Veil of the Ancients – a powerful relic that Merrick himself had helped to recover. With it, he opened passage into the Sea of the Damned, allowing courageous crews to set sail and lay siege to the Dark Brethren’s new hideout: a warped and twisted manifestation of the Sea Dog Tavern laced with devious mechanisms. It’s never been harder to order a grog.

By taking control of nearby beacons and using them to light a path, Merrick’s benefactors made it to the summit and forced a frustrated Warsmith[www.seaofthieves.com] to withdraw empty-handed. Yet with her parting shot, she swore that the Brethren would torment Merrick and his loved ones for as long as he lived. So for his family’s sake, Merrick decided not to board the Ferry of the Damned and regain his flesh-and-blood form, choosing to shun the mortal coil and leave his family behind.

Taking pity, the Pirate Lord has since arranged accommodation for the spectral Merrick that keeps him well out of harm’s way – although, so far as the larger Sea of Thieves is concerned, the forsaken fisherman never did make it home. One question remains, however: where, in the midst of this daring rescue and its bittersweet aftermath, was Belle herself? 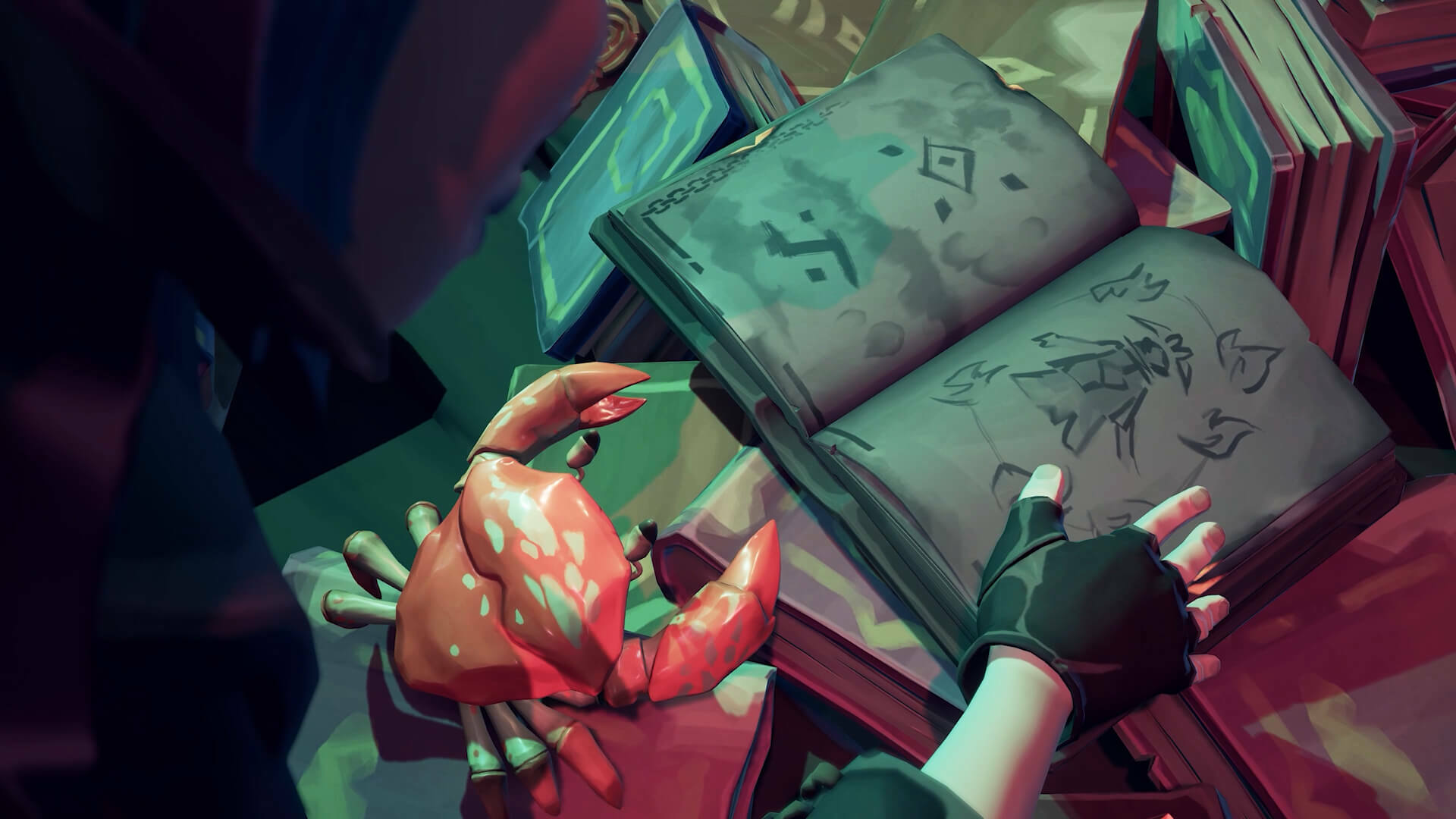 Alarmed Belle Some insight into that lingering conundrum is offered by ‘The Sirens’ Prize’ cinematic trailer, which suggests Belle’s attention has been occupied by a different danger altogether. The Dark Brethren are not the only group plotting to shape the seas to their own liking, and while the Pirate Lord’s allies have been locking horns with the Warsmith, foes like Captain Flameheart[www.seaofthieves.com] have been able to advance their plans without hindrance.

Caution and suspicion led Belle to place Merrick’s safety in pirate hands, and guided her to a tome which alluded to an approaching ‘Time of Resurrection’. Even the threat of such an event taking place was more than enough to send Belle plunging below the waves in search of aid – though who exactly she intends on seeking help from, and what the cost might be, remains to be seen.

With a portentous prophecy now looming over the Sea of Thieves, and whispers of Heralds and rituals beginning to circulate, it can only be a matter of time before pirates find themselves embroiled in more intrigue ahead of a brewing confrontation… one that fate itself seems to have declared inevitable.

You’ll be able to dive into the next chapter of our ongoing story when ‘The Sirens’ Prize’ launches on September 15th, with your window of opportunity lasting until September 29th. Mystery and history await, but be on your guard – on the Sea of Thieves, it can be difficult to forge alliances without also making enemies…