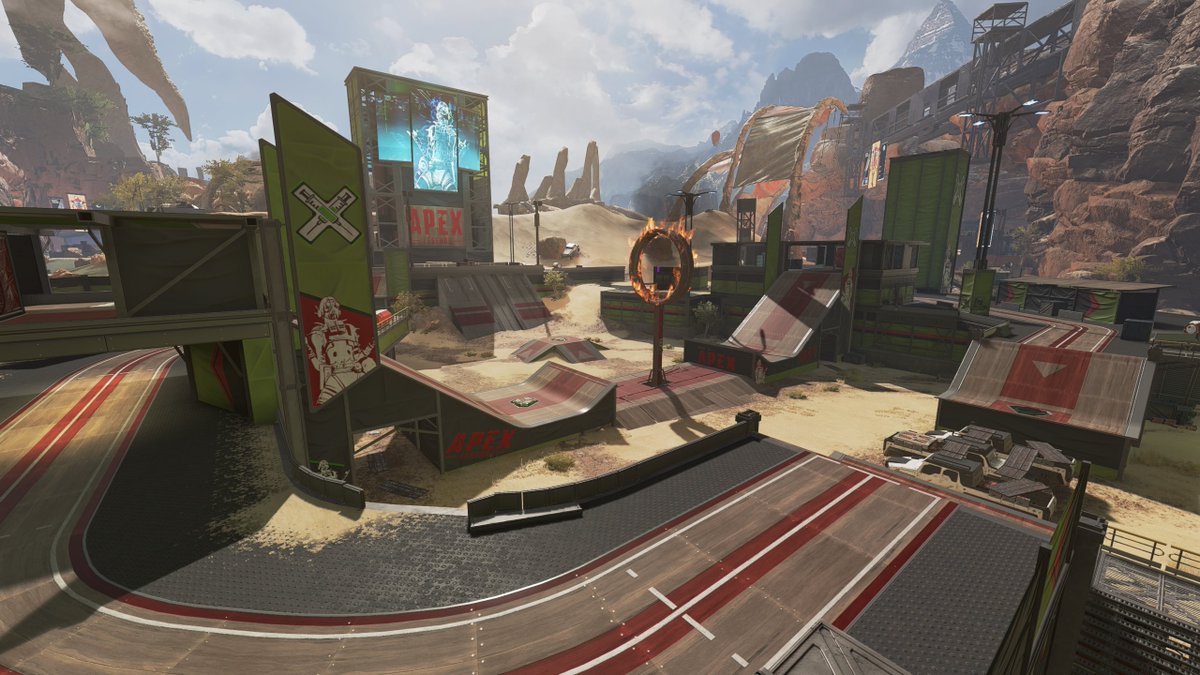 It would be too small! It's important to have multiple POIs in an Arenas map, ideally POIs with direct line of sight between each other. This might be one good POI (although there's a lot of sight blocking with the tall structures), but it wouldn't be enough for an arenas map.

about 1 month ago - /u/AmusedApricot - Direct link

Why not try different sizes? Eg some tiny, which favors certain weapons and legends, and some large, favoring others? Since Arenas is new, seems perfect to experiment with different things!

We experimented with lots of stuff! Lots of spaces in BR maps and also lots of custom map prototypes. We learned a lot about what works and what doesn't, and unfortunately small maps just didn't really work imo. In my personal experience they felt like they got too same-y really quickly, you lose most of the interesting and meaningful decision making about where to go based on where you think the enemy will go, weapon loadouts, etc. The POIs like the health bins and the cash stations and the care package just felt all too close together too.

I'm no level designer, this was just my personal experience with it, but wanted to note that we have been experimenting a lot with this before launch, and will continue to do so!

i want octanes gauntles as arena map, would be so good.

It would be too small! It's important to have multiple POIs in an Arenas map, ideally POIs with direct line of sight between each other. This might be one good POI (although there's a lot of sight blocking with the tall structures), but it wouldn't be enough for an arenas map.

This begs the next thought - you could enhance/redesign Octane's Gauntlet, resize it, move the pads/platforms further apart, add more cover/boxes etc. It would make for a very decent map IMO. And, you could add a second PoI? Maybe some cool underground cave system under the surrounding desert, that would be really cool.

Also, the Mirage Voyage map (sorry I don't know the exact name) feels like a 1 POI map to me. Yes, the ring can go to that complex to the south, but in my experience thus far, 9/10 games are decided around the voyage ship. I personally think that map is too small, or the ring doesn't pull enough south on the first ring.

You could do all of these things! However, you couldn't do those things and still have it be a "BR location"--the big win for us there is that we don't need to make a new map and can literally load the BR map. That's why you're not seeing any changes at all between Artillery in KC and Artillery the Arenas map--same for Thermal and Gardens in the next few weeks.

Now we could copy-pasta it into a custom map and develop it further that way, but at that point we might as well build a map for Arenas from scratch. If you've played a bunch of Arenas already, you will probably have found that Phaserunner and Party Crasher play a lot better than Artillery--that is because they were built from the ground up for Arenas gameplay, and we've learned even more since then so our next Arenas maps are going to be even better (IMO).

As for Party Crasher, having played on this map for nearly 6 months now, trust me when I say that people will eventually come to understand the power of the POI we used to call Construction (back when it was actually an in-construction building; not sure what we call it now). Particularly when the air drop and the circle are there, taking and holding that building with Wattson/Caustic/Rampart/Gibby or someone like that is immensely powerful. Eventually the ring will bring the Voyage players down to you, forcing them to approach through no man's land.

Yeah it is! It has the two tall buildings, the two bunkers, and the high ground reachable via zips and stairs. That's three distinct play spaces with sightlines between them and a clear ring/airdrop bias of one or the other. That makes it big enough!

Day 7: trying to alert a dev

Mirage isn't super strong. His decoys still die when they traverse on bad geometry. The trails add too much visual clutter. And he basically needs a better ultimate & passive. Same goes for Rampart.

Aim assist still doesn't lock on to decoys, and the footsteps in the ultimate aren't very convincing either.

Consider a dev alerted. We know about rampart muzzle flash (part of the design and her power budget); you're straight up wrong on Mirage being weak. The aim assist thing is something we'd like to fix down the road but don't really feel it's high priority.

Is the design philosophy for arena maps going to affect any POIs on maps in the future? IE: you introduce a new town takeover or are working on a POI for a new map and go in thinking "This POI is going to be an arena map so let's design it that way"?

I'm really not a level designer. You'd have to ask one of them. What answers I have are gleaned from conversations with the real experts. There's an AMA coming for Legacy at some point--that would be a good time to ask this.

Hi, I just wanted to tell you you did a great job this season. Im really enjoying it, I havent played this much since season 4. I also have a question, when did you start working on the arenas? Like how long it took to make the new mode?

And this is unrelated but can you check this bug? Its not gamebreaking but it shouldnt be too hard to fix (I think) https://answers.ea.com/t5/Bug-Reports/Random-music-pack-option-not-working-in-lobby/m-p/9469984/highlight/true#M39618

We started working on Arenas in October 2019; the mode was originally inspired by DotA autochess of all things--it had all these fights going on all over the map at the same time. We very quickly realized fighting the same squad over and over rather than a tournament structure was vastly better--you could actually adapt to what they were doing and react round to round.