about 1 month ago - The Apex Legends team - Direct link

Hello once again from your Apex Legends Ranked designers. Today we’ll take a look at our goals, talk about some results, and detail a few things for Ranked Leagues when Season 7 - Ascension launches.

Here’s a quick recap of our goals for Ranked and a look at some of the Season 6 results. The distribution continues to look good, and the ranked resets are creating motion and competition at the top end of the ladder.

Here’s a preview of the Season 6 ranked rewards you’ll be earning when the Season changes. 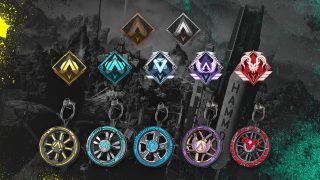 Since this season brings a new map to the games, we’ll be starting with Olympus, then moving to World’s Edge in the second split, with the planned split reset on December 15, 2020. King’s Canyon will sit this season out for ranked play but will return in a later season!

Now that crossplay is launched, console players that are opted in to crossplay will matchmake against all other console players. Everyone in the pool is still sorted by total RP count as usual. This increased player population should help keep matchmaking times short.

For Master and Apex Predator players, playing Ranked matches will earn you RP for your current platform, e.g. if you are a PS4 Apex Predator playing with PC friends, the RP you score count toward your rank only on PS4, even though there are PC players in the matches with you.

We’ll continue to look at the impact crossplay has on ranked progression, and will revisit tuning RP and matchmaking systems in coming seasons. Thanks for playing!

Play Apex Legends for free* now on Xbox One, PlayStation 4, and Origin for PC.

This roadmap may change as we listen to community feedback and continue developing and evolving our Live Service & Content. We will always strive to keep our community as informed as possible. For more information, please refer to EA’s Online Service Updates at https://www.ea.com/service-updates.


Apex Legends
Welcome to the official Apex Legends™ YouTube channel, where you can find all the latest trailers, developer diaries, and up-to-date info on Apex Legends. In...

http://tos.ea.com/legalapp/termsofsale/US/en/PC/
Welcome to EA. These Terms of Sale (the "Agreement") govern your purchase of software products, digital content, including additional or enhanced functionality, content subscriptions, virtual currency and in-game content offered by EA and its subsidiaries ("EA", "we", "us", "our"), whether downloaded or hosted on servers or the cloud and regardless of platform (collectively "EA Content"). This Agreement is between you and the EA entity listed in Section 11.B below.