In a region as dynamic and well-documented as Iberia, we were truly spoiled with possible content, and had to make some hard choices as to what would work best in the context of Crusader Kings III. Yet we have filled the Fate of Iberia with flavor content high and low, from fairytales whispered by a fireplace to grand designs of priests and kings. In the Fate of Iberia, you might encounter the Estadea, the wandering dead of Galician myth, the legendary Garduña thieves, great smiths of Toledo, cheese-making Vikings, and Andalusian polymaths dreaming of flight.

For Fate of Iberia we’ve roped in talented content designers from all over our organization to help us pack Iberia full of historical flavor. There is hardly any subject that does not get some love.


Culture and Faith​ Iberia’s cultures were in a pretty good place already, thanks to the culture rework in the Royal Court. But, we’ve done a pass on their traditions to make sure they’re fitting and interesting. If you have the Royal Court Expansion, you’ll be able to make some compelling hybrid cultures here - why not Sephardi-Norse, or Berber-Castilian? It can also be a good way to get involved in the Struggle from the outside. Among other additions, you’ll find that Castilians are now Tabletop Warriors, able to challenge others to a grand game of chess! 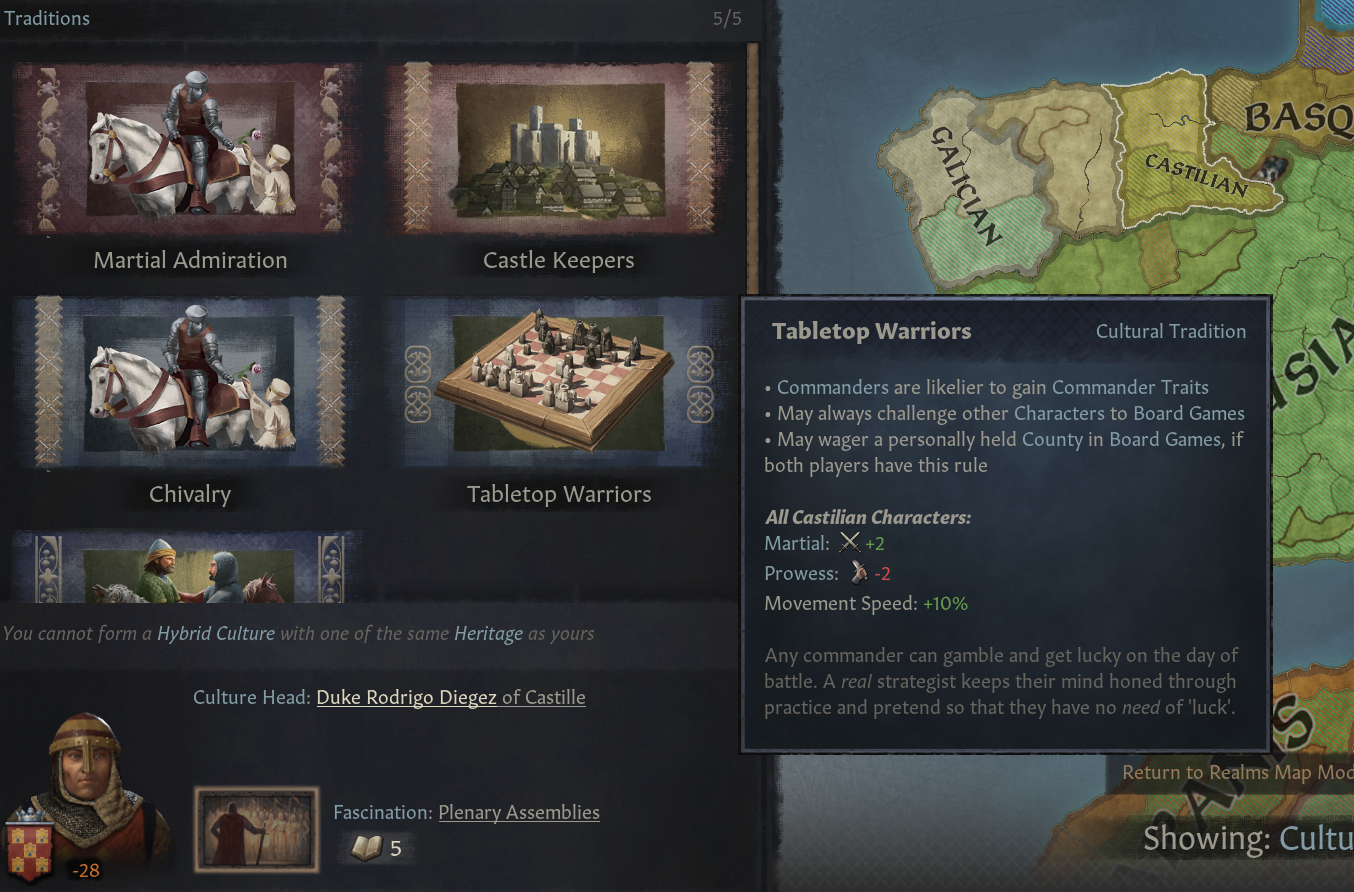 The Kingdom of Castles, indeed!

Concerning faith, our new shared Head of Faith mechanic will add dynamism to Iberia’s fractured religious landscape. More info regarding this will come in a future Development Diary!

There are events for Muslims, Christians, and pagans, but the big addition is the Mozarabic Faith. They’ll encourage historical “what if” playthroughs and some dramatic decisions, exploring the deep Visigothic roots of Iberian faith. Try to take control of Toledo if you play a Mozarabic Christian - it can allow you to convene a new great church council, echoing the one in 711. But take heed - such a council might also affect the struggle… How will your realm be affected by the vicious debates to follow? There are also other new decisions available to Mozarabs - including the ultimate prize, the restoration of the Kingdom of Toledo! 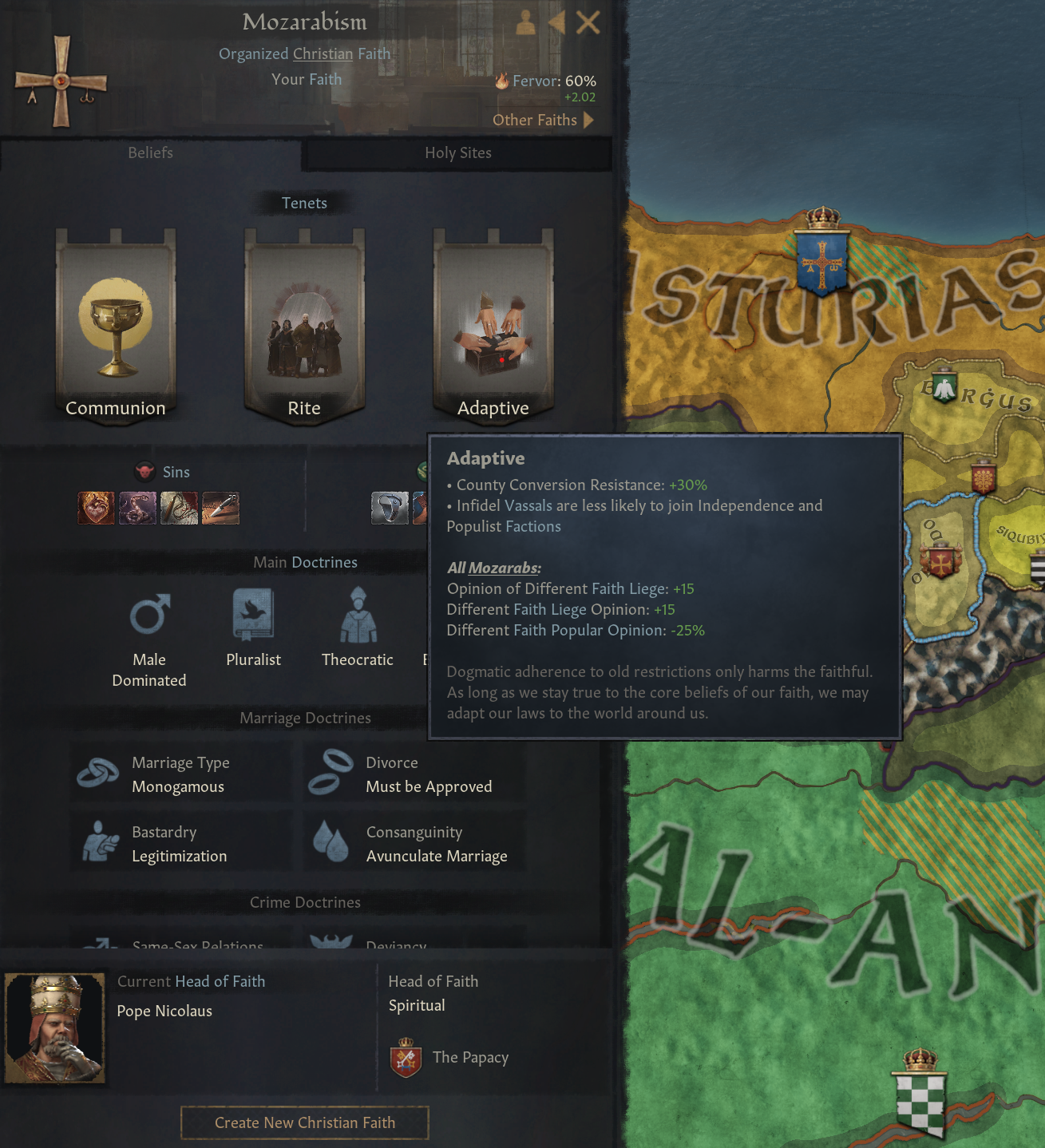 The Mozarabs have a long history of adapting to changing circumstances. 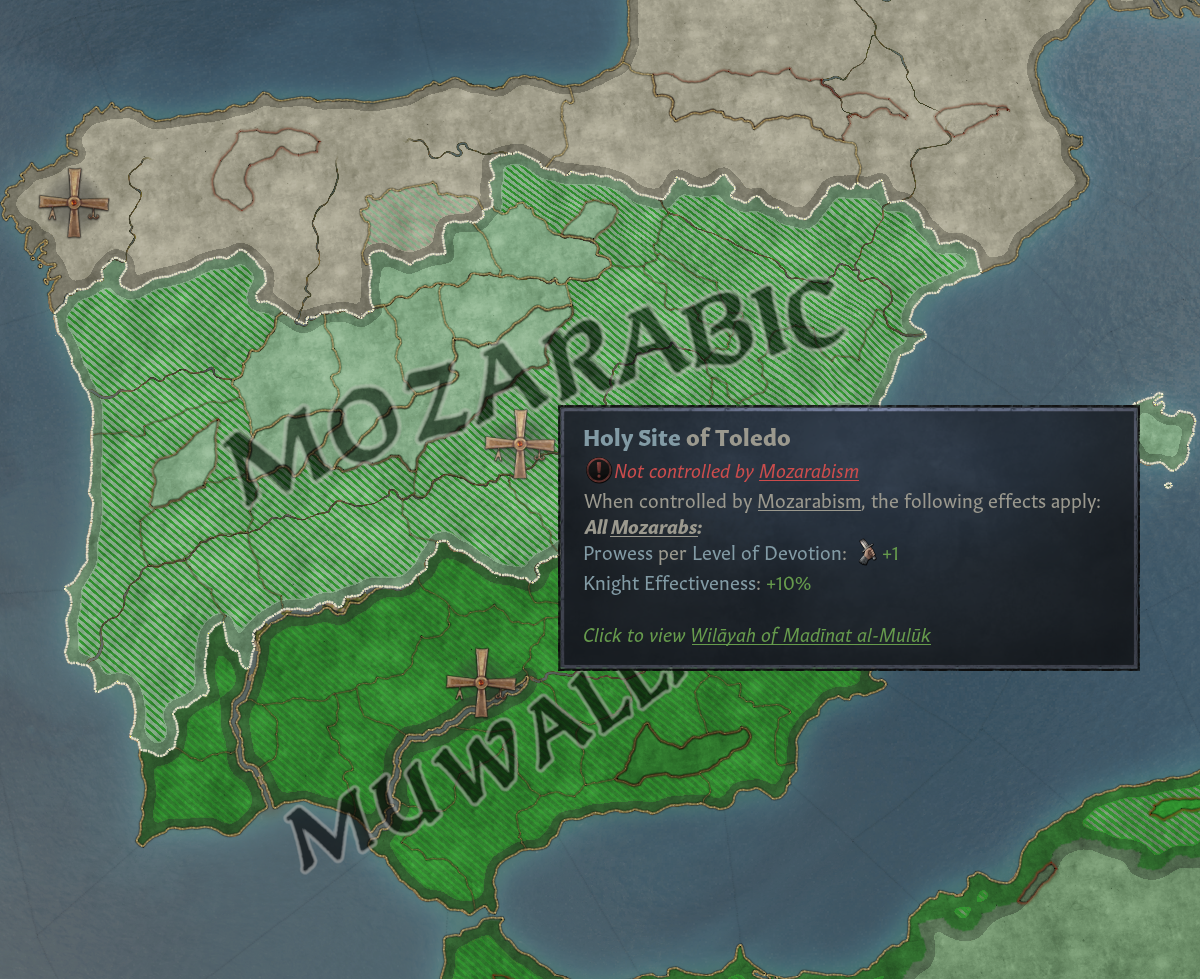 Toledo plays a central role for the Mozarabic faith.

Basque Paganism, the other new faith, is a syncretistic belief with Christian and pagan elements, the most prominent vestige of pagan faith in Western Europe, ensconced in the Pyrenees. Among rulers, it is a dead religion at game start, but its traditions persist among the common folk, and an opportunistic ruler might find reason to Champion the Faith of the Country Basques, and bring it back to prominence. 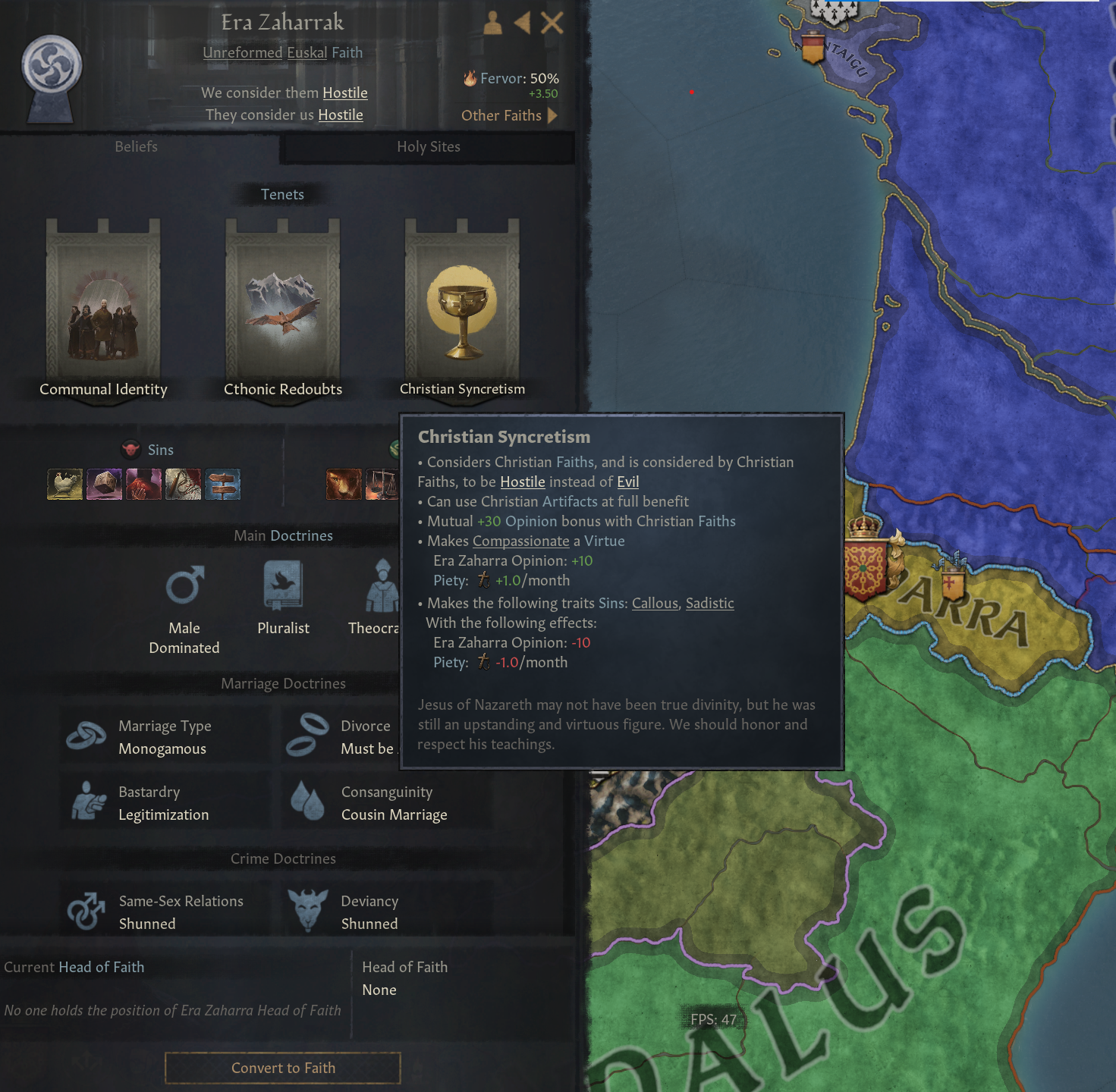 Remnants of pagan belief have endured in the redoubt of the Pyrenees.


Special buildings, Dynasty tracks and Artifacts​ For monuments and special buildings, there are some you might expect - the great mosque of Córdoba, the basilica of Santiago, the walls of Toledo - and some you might not. We’ve begun exploring having natural wonders as province features, so you’ll find the Rock of Gibraltar here, too. While Iberia certainly has a rich history, it’s not as overcrowded in ruins of past splendor as say, Mesopotamia or Rome, so while there are some Visigothic and Roman monuments here, we focused on things built over the course of the Middle Ages. There’s accordingly also a few you can build yourself, after the game has started. 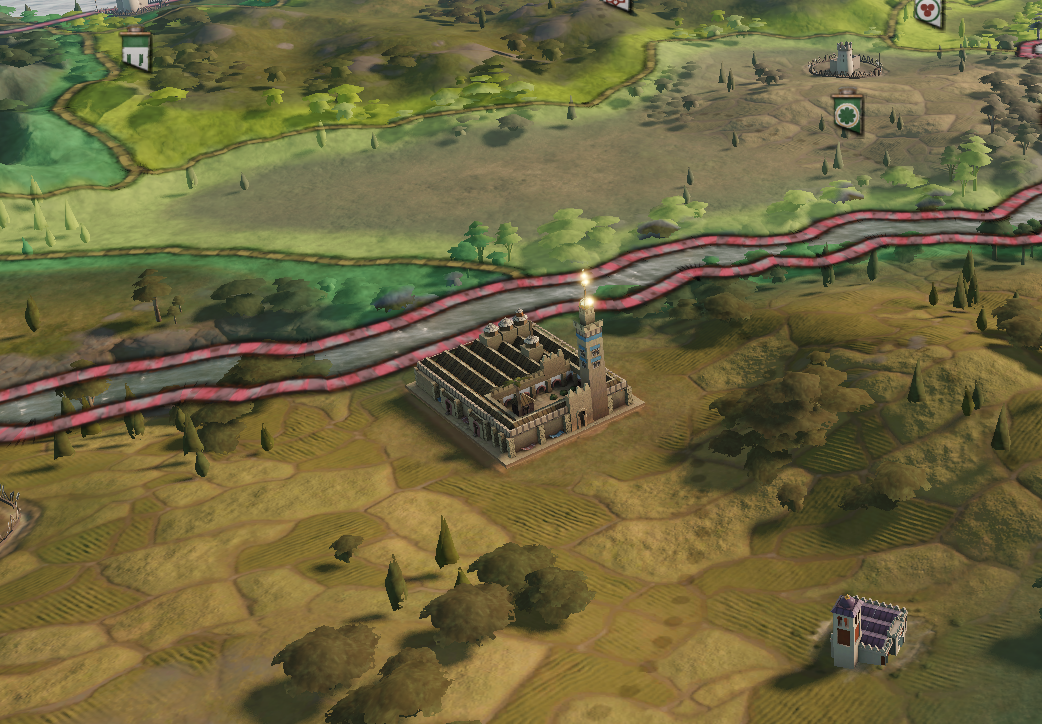 The Great Mosque of Cordoba in all its glory! Art has done a tremendous job in bringing the monuments to life. 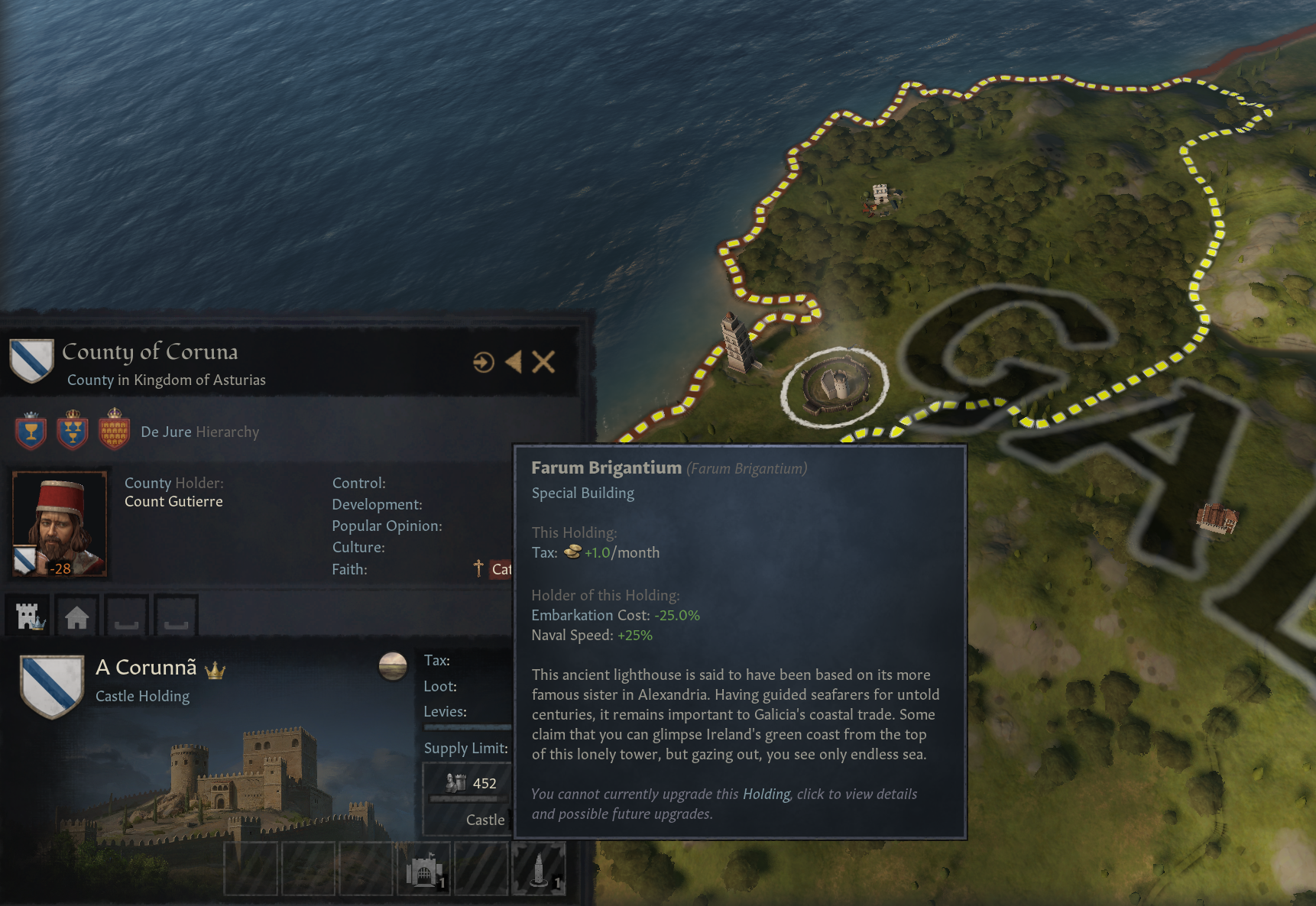 The Tower of Hercules, as it is also called, still stands today, the oldest extant lighthouse in the world.

We’re adding new artifacts as well of course, among them the famed Bells of Santiago - or in 1066, their melted-down and reforged state as aquamaniles in the Muslim Court of Toledo. Historically, of course, they were turned into mosque lamps, but that would have been hard to represent well in our 3D courts, so we went with aquamaniles instead. You’ll also be able to find armillary spheres, scallop shells from the pilgrim road to Santiago, chess boards, Visigothic votive crowns, and much more. If you have the Royal Court Expansion, of course some will be impressive items that our art team devoted lots of attention to, to be proudly displayed in your court. 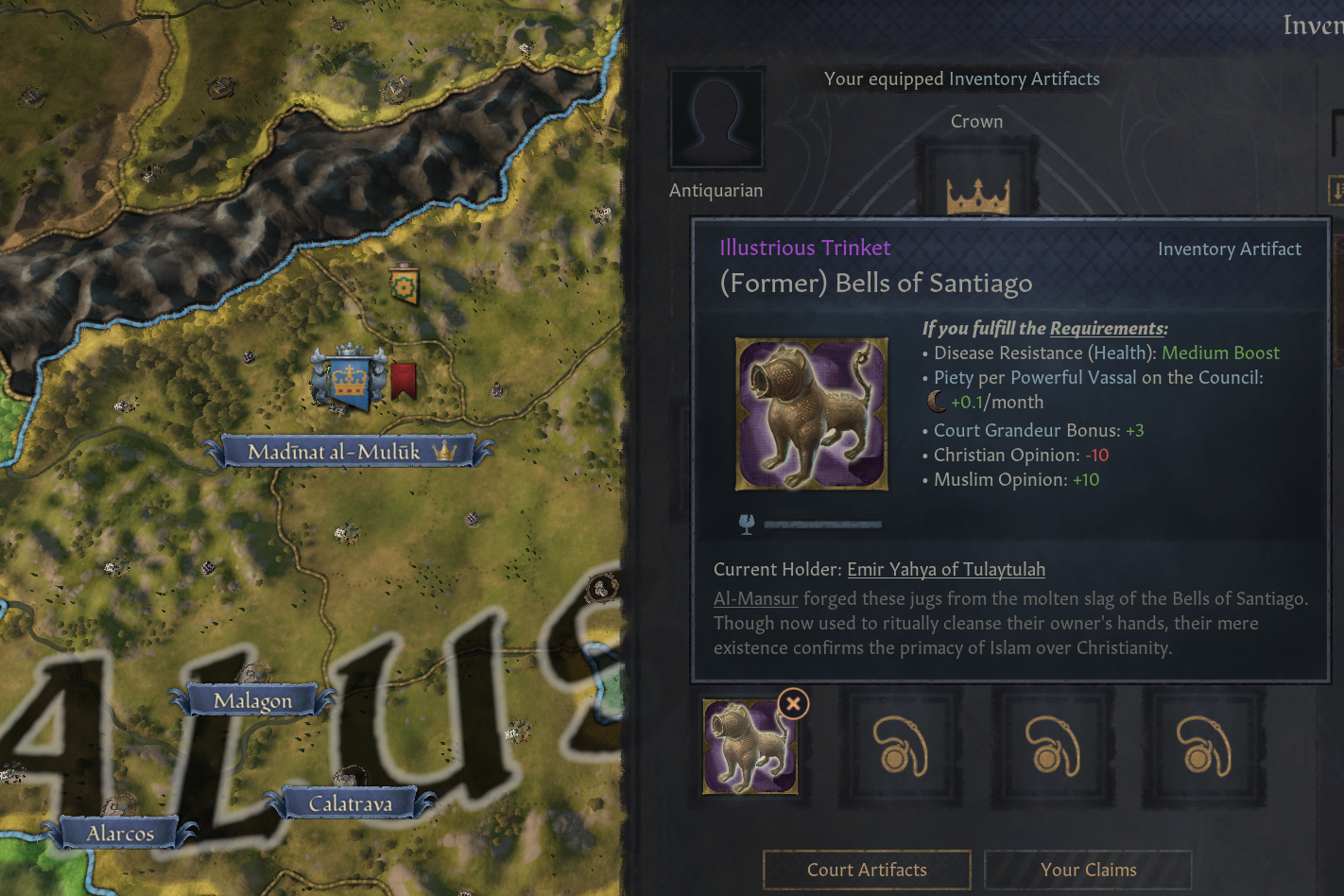 Once the pride of Galicia, they now decorate the Toledo court.

The two new dynasty legacies are Metropolitan and Coterie, expressing the themes of flourishing cities and interwoven, intrigue-riddled dynasties that seemed fitting for medieval Iberia. In the Coterie legacy, you can gain various benefits related to your dynasty and its members, useful for diplomacy and intrigue. The Reliable House perk, will give you 10% of your councillors’ primary skills, while the ultimate perk in this legacy, Pragmatic Roots, makes the Disinherit interaction available for all dynasty members. The Metropolitan Legacy will aid you with development, construction and prestige, unlock a unique Expand Cities decision, and give you some added motivation to build new city holdings in your realm. The Republican Education perk introduces the Town Maven trait, that dynasty members might receive if they are educated in a county with hig development. Metropolitan is a great track if you prefer playing tall, building an economically strong realm.

I’ll now leave it to Hugo, to talk more about our decisions and events.


Events & Decisions​ Fate of Iberia contains a multitude of events and decisions ranging from struggle-specific events which shake-up plans, to flavor events designed to enrich the experience with classic paradox comical occurrences and references to regional curiosities.


Struggle Events​ As mentioned above, struggle events help add a bit of chaos to the overall equation, presenting many opportunities themed around the current phase for cunning strategists to turn one’s disaster into another’s advantage during the greater conflict. Struggle events are exclusive to characters partaking in the struggle.

Such as this event, in which the player is able to give their word in exchange for a claim on a county. Failing to keep your word will certainly have consequences… 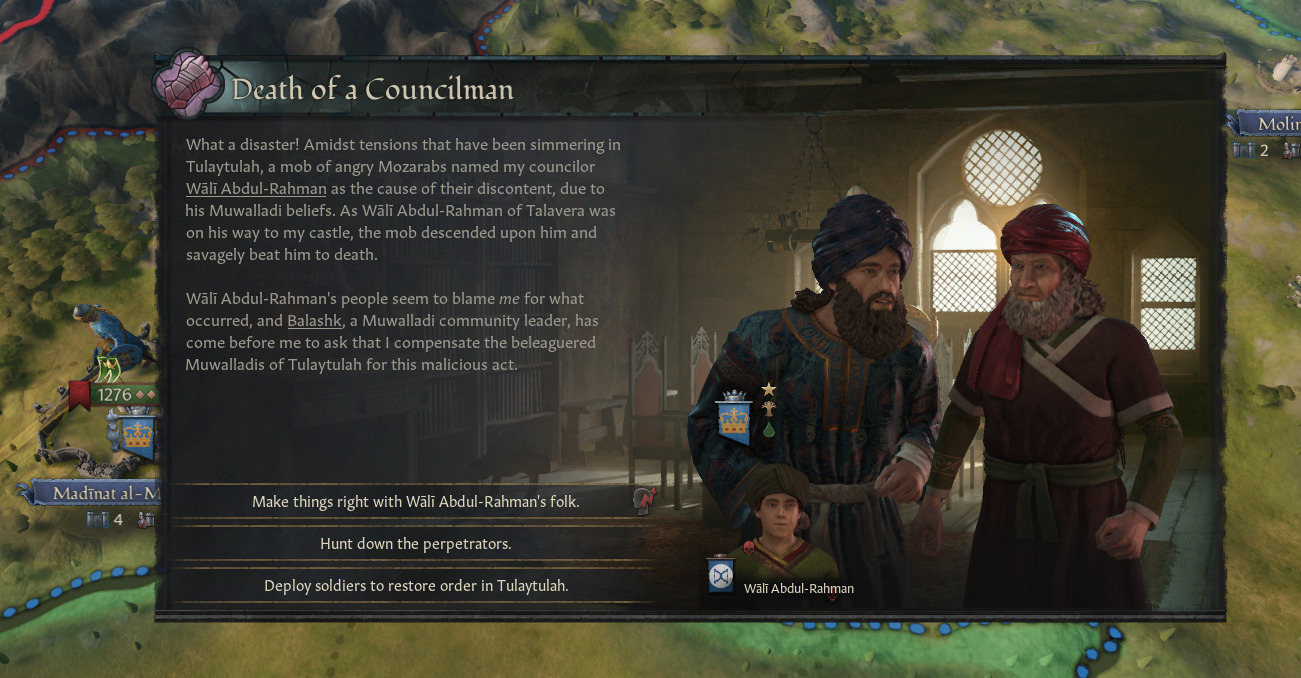 Some events will have you deal with unexpected losses, though you can still gain something from the situation if you play your cards right.

Protecting someone's secrets is a great way to make new friends.
Always trust someone in a sombrero, they clearly know what they are doing.
Other events can grant you advantages when you least expect it, but tread carefully as success is not guaranteed and things can always take a turn for the worse. 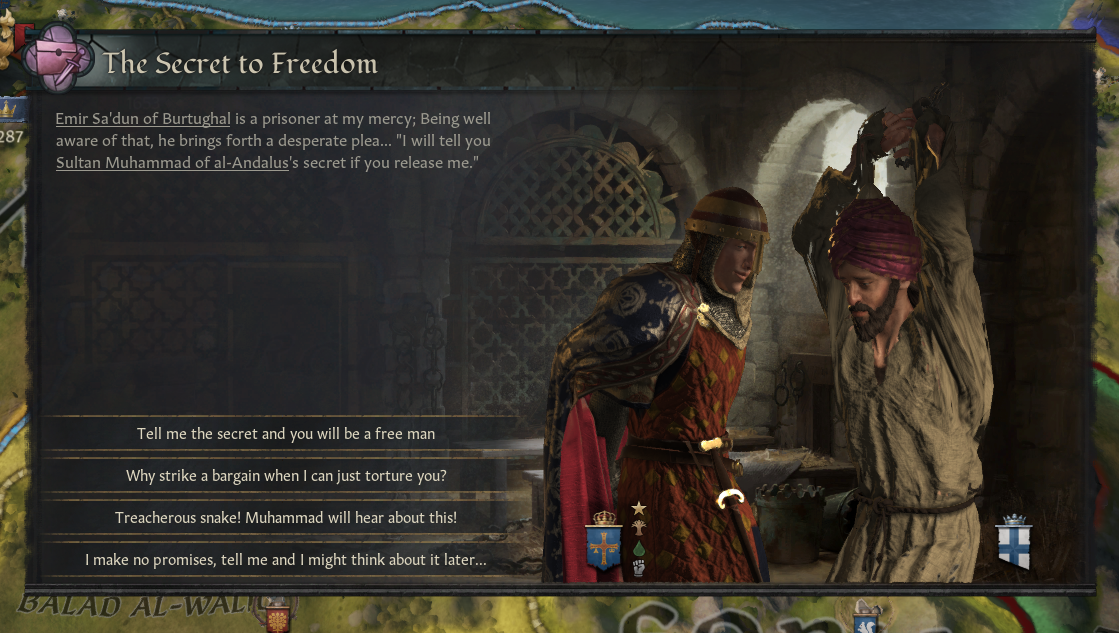 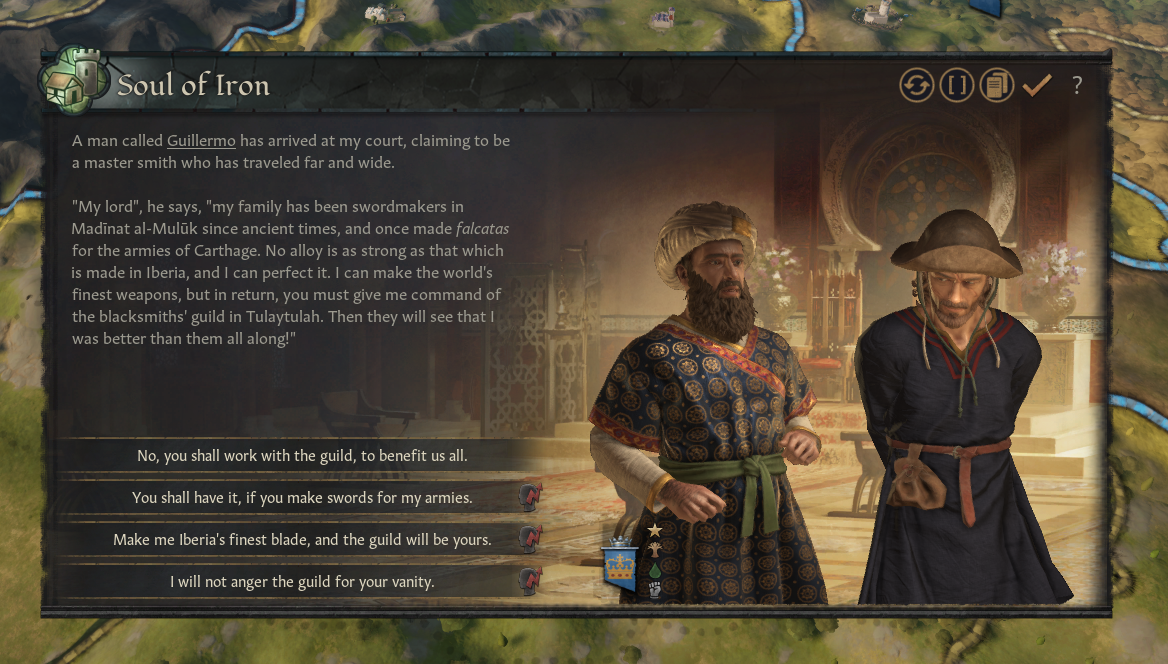 Struggle events —though all related, are quite different in the opportunities, benefits, and challenges that they present, encouraging players to adjust their strategy as circumstances call. I would certainly start conquering my neighbors if I got ahold of some good steel, especially since it’d help me get those catalysts I’ve been after for a while…


Flavor Events​ We have also included a variety of smaller, flavor-focused events that help bring the Iberian peninsula to life and create a greater breadth of content for players in the region to experience. Many of these events are inspired by recorded happenings in the region, while others are simply classic Crusader Kings’ events in a Mediterranean flavor. From a story about frightening “thunder stones”, to the myth of legendary Christian mobsters to a peaceful siesta event, you can be sure you will be getting a full Iberian roster of fascinating, action-packed, and ridiculous events.

Would you eat a whale? Would Allah approve? It probably tastes like chicken anyway. 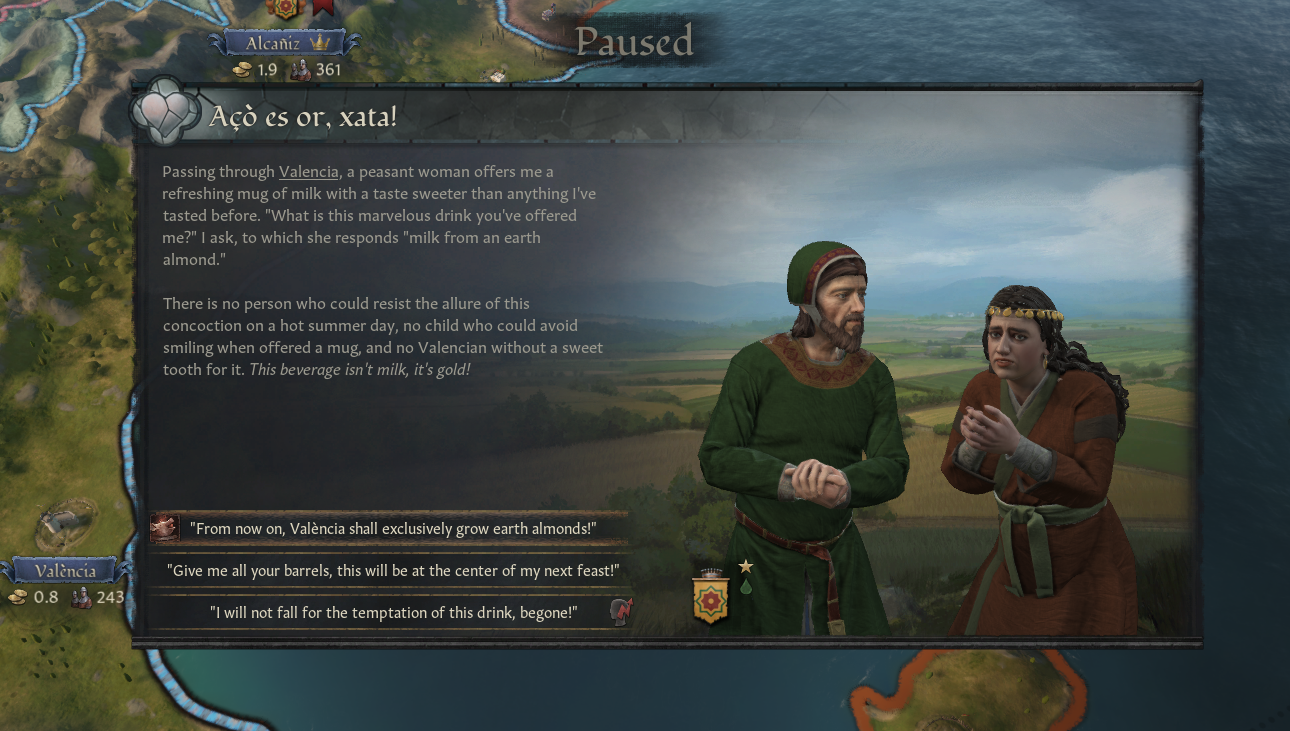 For anyone who has had horchata, this story should sound familiar. Well, with the exception of the whole “now you must only ever make horchata” option.

People from far away come to Iberia in search for a better life, can you provide that?
The Content Design team recommends you read books, they are good for you! 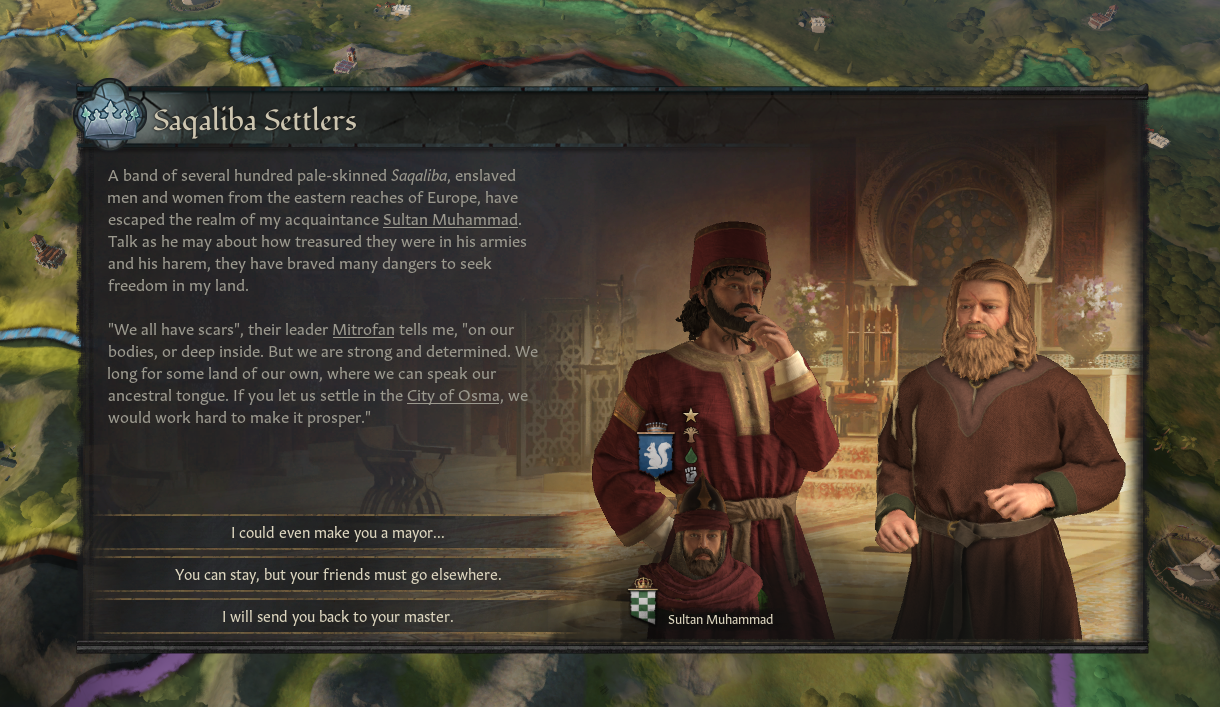 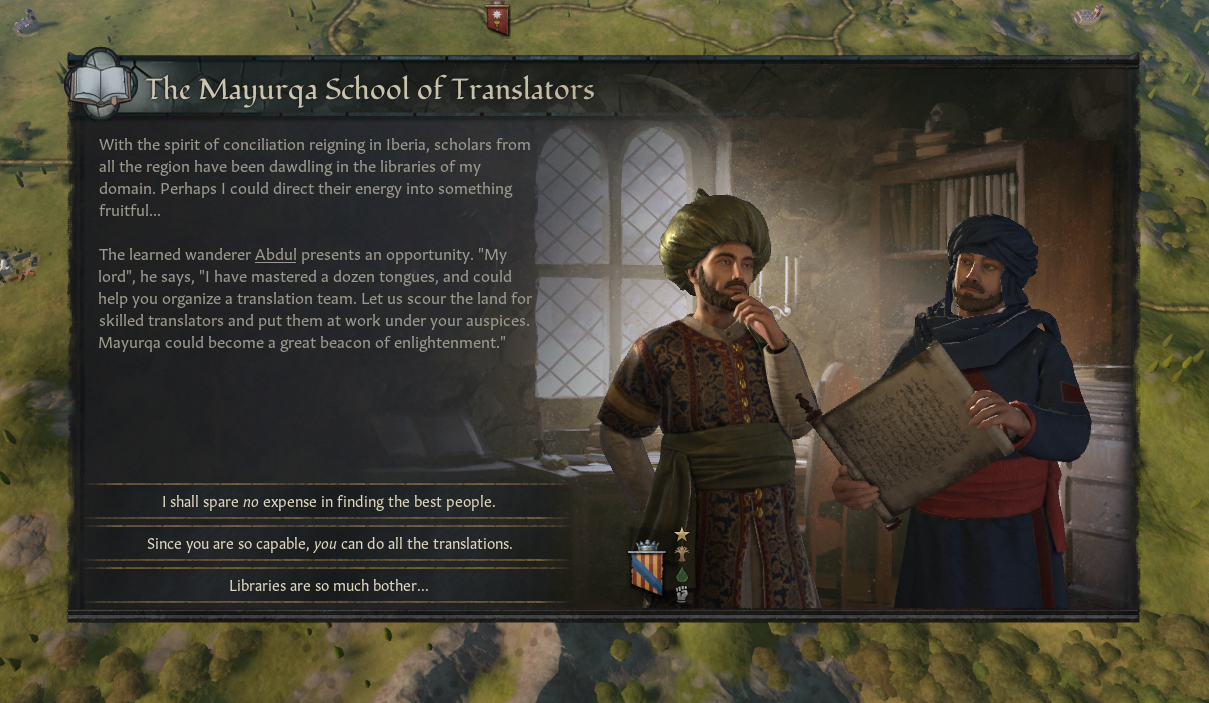 There'll be no shortage of opportunities to improve your realm.


Decisions​ Besides new events, Fate of Iberia also features unique decisions which can be taken throughout the duration of the struggle at specific phases. Let’s take a quick look at two of them now.

We’ve seen a lot of comments and requests in the previous dev diaries not to ignore the Jewish achievements of the period. In Fate of Iberia, one of its decisions allows you to make the most out of these achievements by enabling you to sponsor a golden age of science.

Sponsoring sciences is a noble but expensive endeavor.

As the sponsor, you will receive various positive modifiers, though everyone else in the struggle will receive a weaker version of them too. This decision is not exclusive and anyone can “steal” the golden age from you, doing so will strip you of the modifier and replace it with its weaker counterpart. I fully expect this to be the correct kind of chaotic during multiplayer matches.

Though not listed in the tooltips, sponsoring a golden age also gives you bragging rights in multiplayer lobbies.

Though not listed in the tooltips, sponsoring a golden age also gives you bragging rights in multiplayer lobbies.

Of course, this decision isn’t just a couple of modifiers strapped to a button. Sponsoring a golden age will lead to one of three random events that provide you with the opportunity to easily recruit highly talented scholars and members of the scientific community. 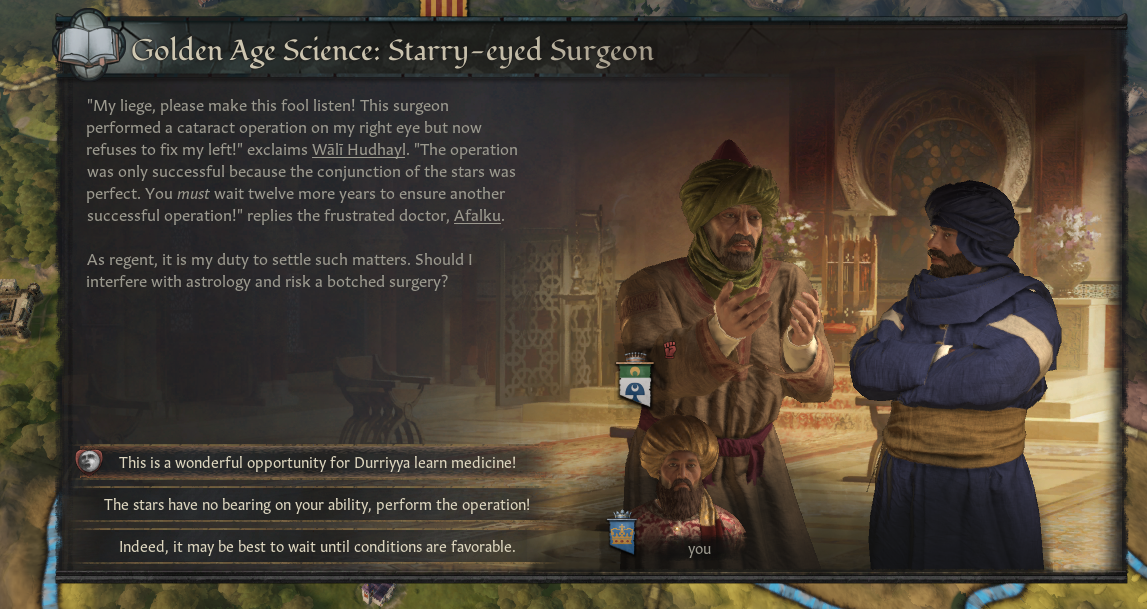 Making the doctor wait will add them to your court, while performing the operation may help you improve relations with your elderly vassal. Of course, under the... "right mindset", this can also become a learning opportunity for your young child, pre-industrial cataract surgery was a lot more successful with a young assistant present.


Now, for a more standard decision example: In classic Crusader Kings 3 fashion, we also have plenty of decisions to form titles and gain control over land, such as the “Iberian Foothold” decision, which encourages large foreign powers to make a dash for their piece of the metaphorical Iberian cake by letting them end the struggle from the outside. Though the military investment will certainly be large and the many disunified states in Iberia won’t take their conquest laying down… 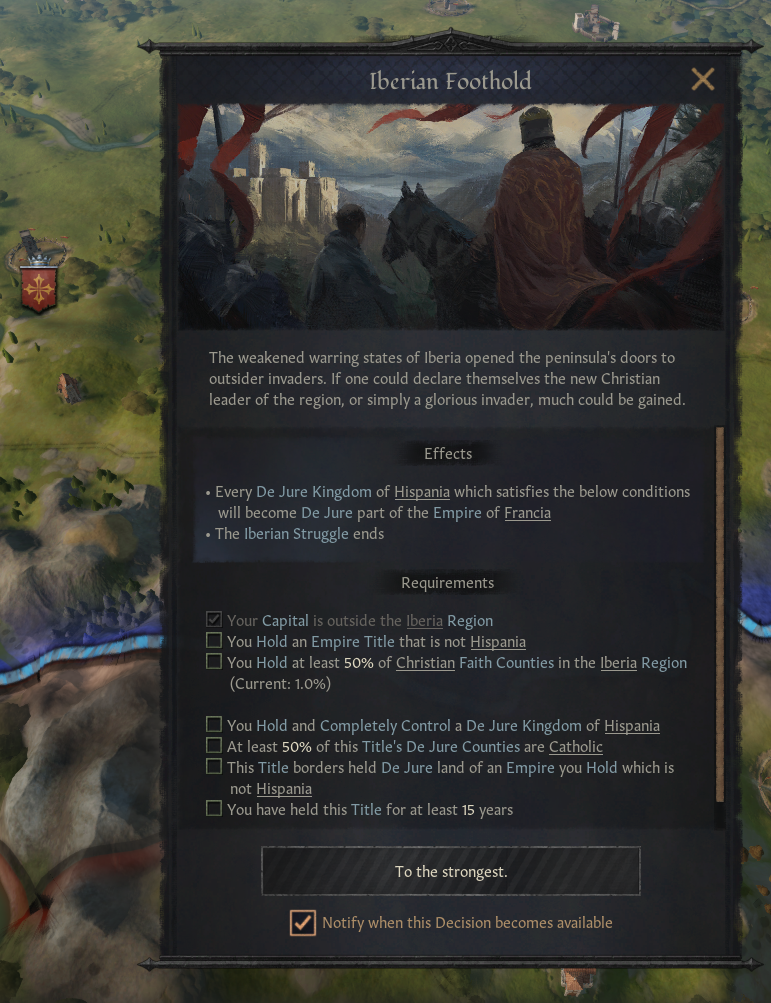 There are plenty of opportunities to rewrite history in Crusader Kings, will you unite Iberia under the French banner or will a post-unification Iberia conquer Europe?


Closing Comments​ We hope the content displayed in this dev diary has gotten you excited about our upcoming Flavor Pack, and look forward to hearing your thoughts on the discussion comments below.