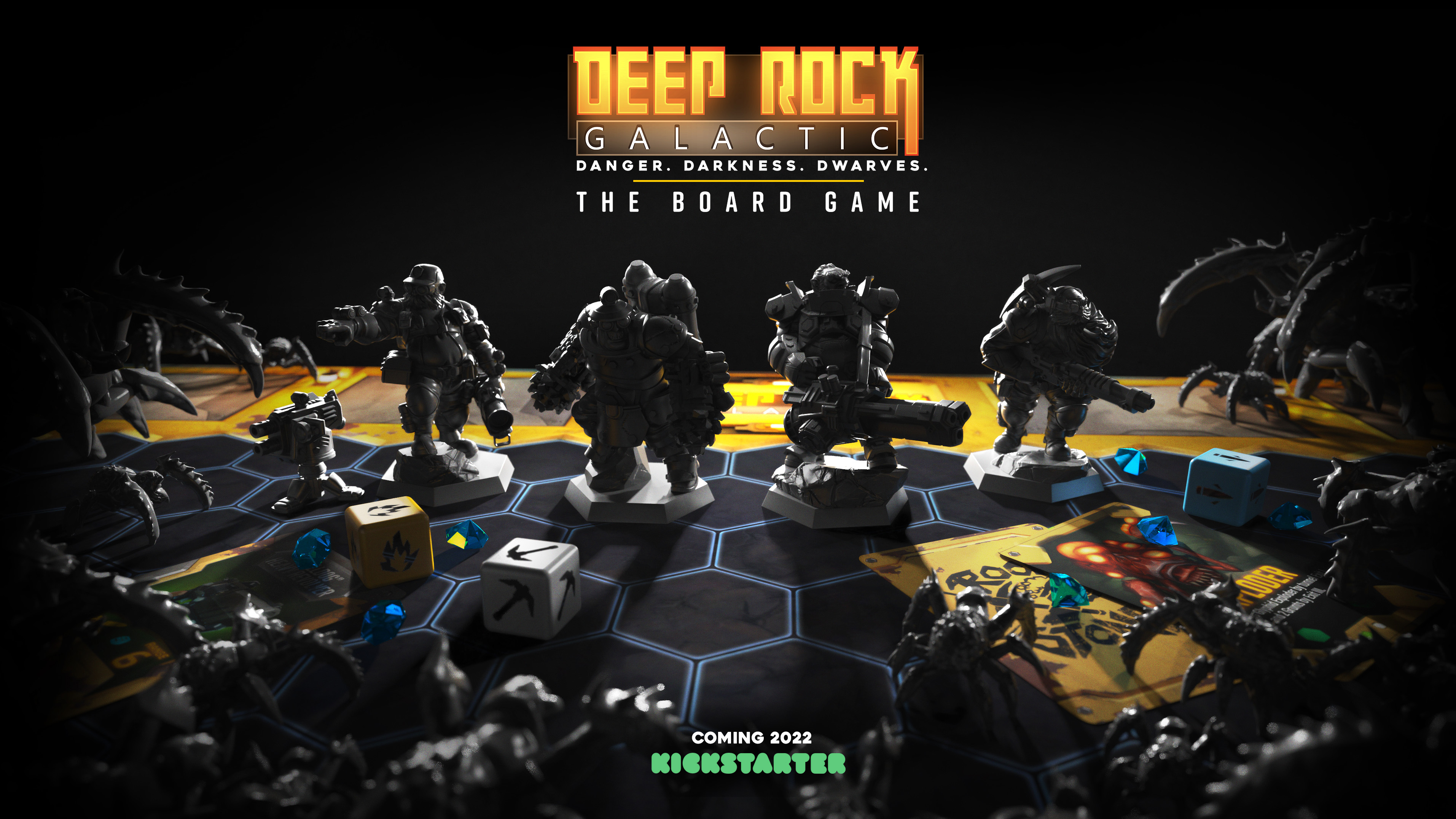 Hello, Miners!
We are finally able to reveal a “small” side project that has been in the works since the beginning of 2021. And yes, as some you have guessed, we are making a board game adaptation of Deep Rock Galactic! To give you some background on this, our CEO and co-founder, Søren Lundgaard, has prepared this blog post for you.

But before you read on, please check the pre-Kickstarter page HERE[www.deeprockgalactic.com] and make sure to sign-up for a notification when the Kickstarter goes live next year! And a chance to WIN your own copy!

From idea to board game
Apart from loving computer games, many of us at Ghost Ship are also board game enthusiasts, and we’ve dreamed of a board game adaptation right from the beginning. Back in November 2020, I received an email from our good friends at MOOD Publishing about collaborating on a board game project and I quickly replied: Yes! It got even better when we convinced our friend and professional board game designer, Ole Steiness, to join in. Ole has several released board games under his belt - one of them (Champions of Midgard) even broke into the Top 100 in Board Game Geek.

The idea was to first create a prototype and then do a Kickstarter to measure interest and scale the production. This method has worked well in the board game industry - much better than for computer games.

So, is this a good idea?
Before you start on a project like this, it’s always a good idea to do a bit of research, right? I wanted to know how many board games were created based on computer game IPs, and specifically how many of those were launched on Kickstarter, successful or not. So I trawled through the entire Kickstarter page and compiled a list of all the computer-game-IP-related projects that I could find. If you are interested, you can see the result here[docs.google.com]. 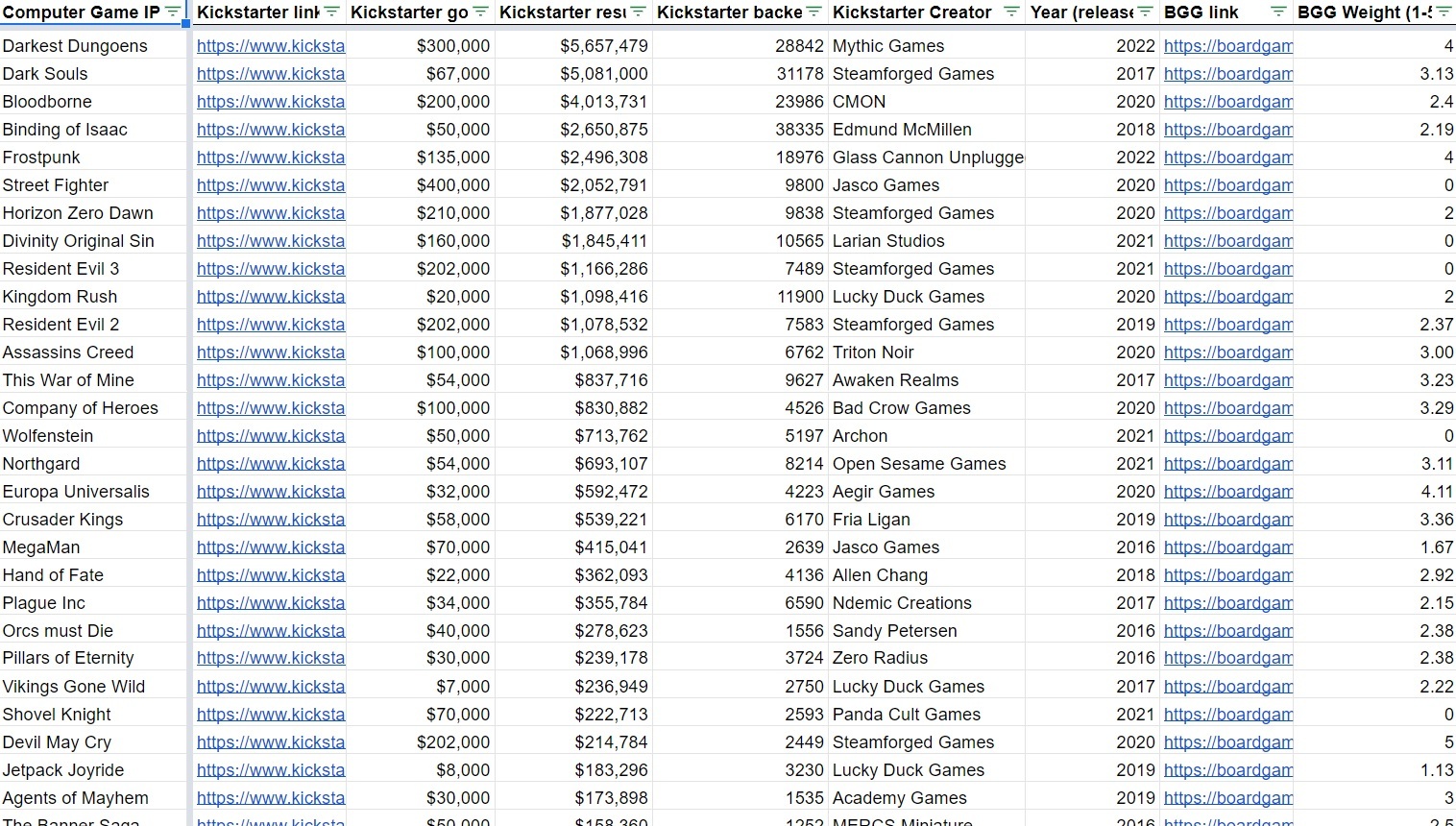 List of board game Kickstarters based on computer-game IPs

So, what did we learn from this research? It showed me that very few of these actually failed their goal, so that was comforting. I was also looking for how “heavy” those games were, and it looked like they leaned towards the heavier side of board games - again this was good, as I expected a DRG board game to be somewhat heavy. Looking at how the games were received on Board Game Geek, it was also clear that we shouldn’t expect to create something that would rock the board game world. Getting restrained by an IP and trying your best to live up to expectations from the community does not always result in a masterpiece of design. Unsurprisingly, many of the successful Kickstarters had games that offered a cool selection of miniatures. This played in the favor of Deep Rock Galactic as well.

All in all, the conclusion was that this project was viable, so we decided to get a prototype started. 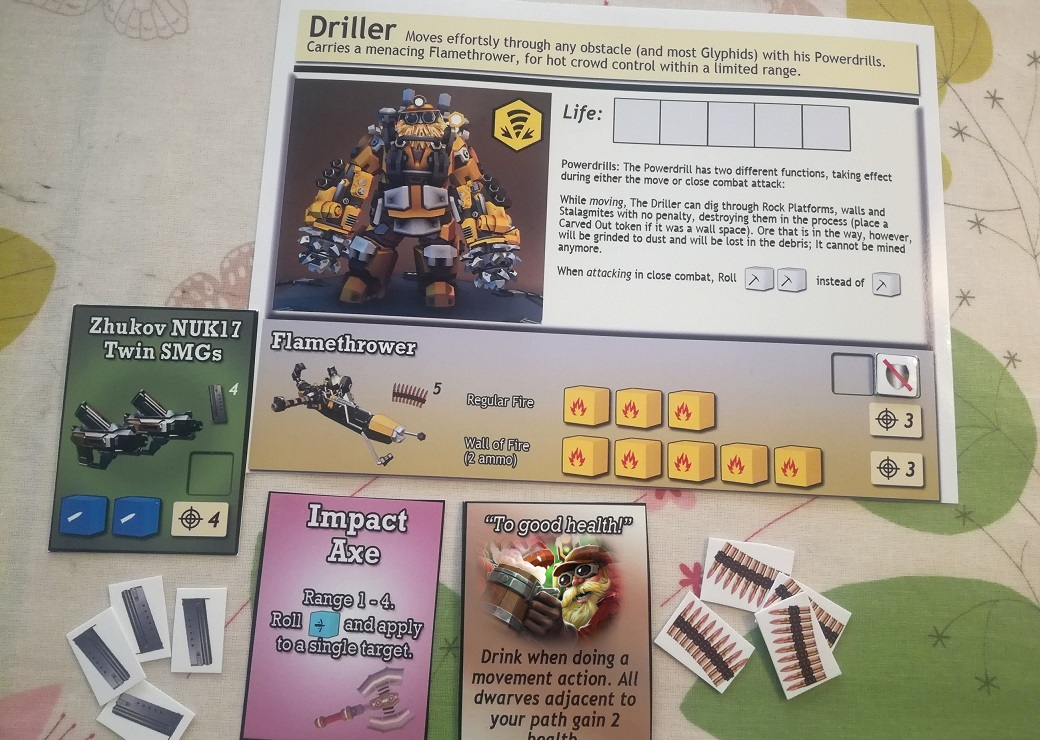 Finding the Fun
The first few prototypes were honestly not that fun. We were trying out all sorts of things to find the unique elements that a Deep Rock Galactic board game could bring to the table. There was never any doubt that the core of the game should be a 1-4 player co-op dungeon-crawler, and we would not be afraid to build on good design principles from other co-op board games. The first prototypes were quite focused on the traversal and exploration aspects of Deep Rock Galactic, and while it looked quite cool, it turned out to be too fiddly. So, we decided to focus more on the combat, while still experimenting with the cave layout and cave sizes. 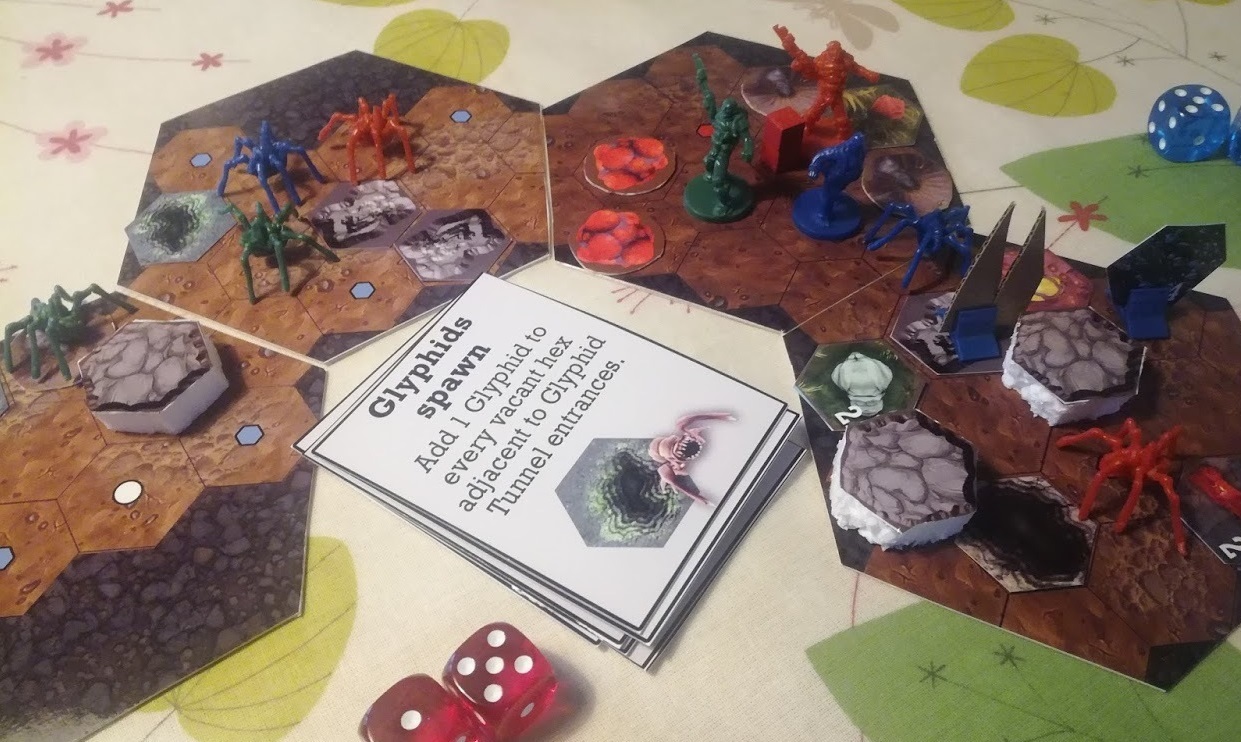 Very early prototype with focus on random layout and traversal

During the prototype phase, we kept experimenting with the ability to dig into the terrain. And we realized that this would be the unique thing that the game would bring to co-op dungeon-crawlers. While the caves are pre-placed, there are no pre-made connections. It’s all up to the players to create their own tunnels and be clever about the impact that has on the movement of both the enemies and the players. But there were still many other issues to solve. 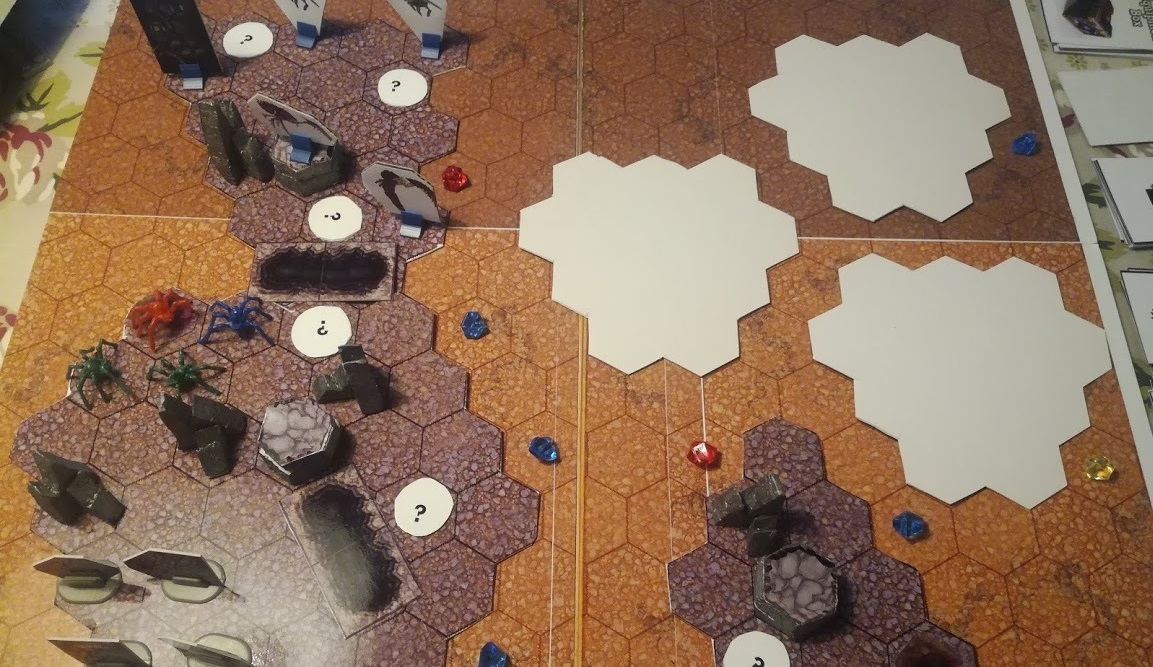 
Rock and Stone in Co-op
Just like in the computer game, we wanted the collaboration between the players to feel important and to form the experience. The synergies between the classes helped here, but it wasn’t as pronounced as in the digital game. Part of this was the toned-down focus on traversal, and we felt the game needed something else to spice up that pure feeling of co-op gameplay. We also wanted the players to get into the role-playing aspect of the game, and the solution came in the form of a set of Rock And Stone cards.

While shouting “Rock And Stone” in the computer game doesn’t actually affect gameplay, we thought it could be cool if it actually did something in the board game. And to improve the co-op aspect we decided to let the Rock and Stone cards always be about helping your fellow dwarves. This worked out really well, especially when you play with the rule that you have to say the Rock-and-Stone line out loud for the card to have effect :-) 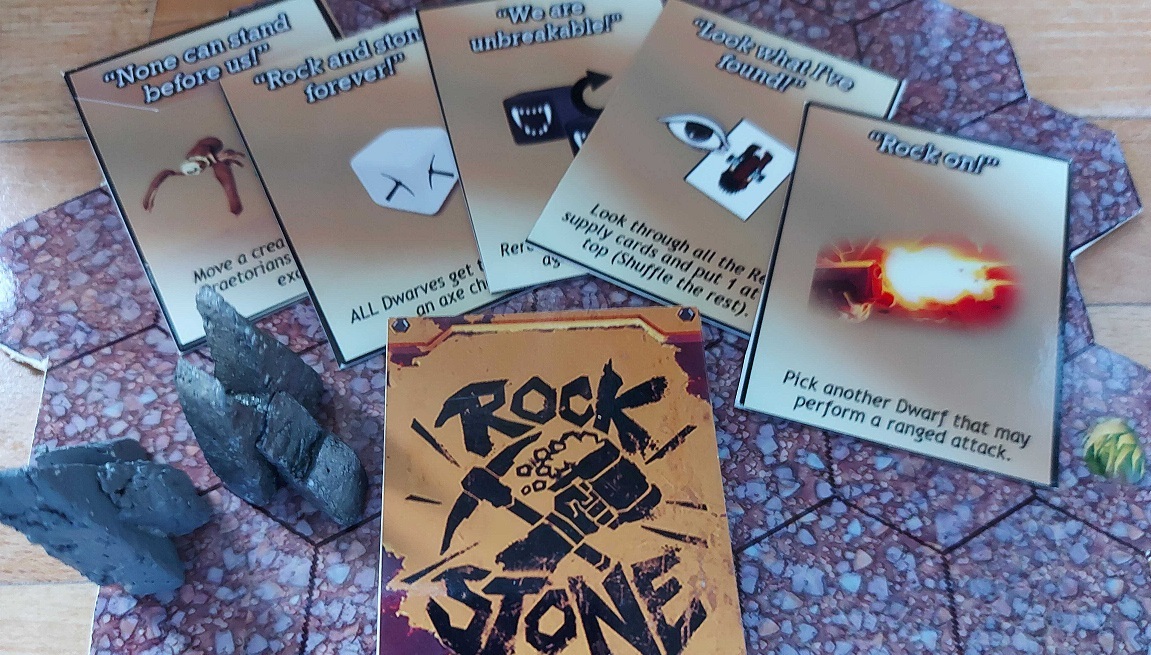 Work-in-progress versions of some Rock and Stone cards


Missions vs Campaign
Initially, we thought that the game would be a series of smaller missions played together in a campaign - with character improvements and progression between missions. That’s how the computer game works, and other co-op board games have accomplished this. But the more we playtested, the more we felt like part of the progression should happen inside the mission. This feeling also came from the fact that the missions were not that short - it looked like playing a mission with 4 players would take about 1-2 hours. Along with the random event cards, the different mission types, the flexible layout, and this in-mission progression, it moved more and more towards a single-mission design rather than a campaign focus.

Now, there is nothing stopping you from playing several missions in a row and forming a sort of story out of that. But we decided to keep the focus on a single mission to make sure that it would be a fun challenge in itself. And then later, we might create mini-campaign expansions. Just as its digital counterpart, the board game quickly proved to be very expandable. 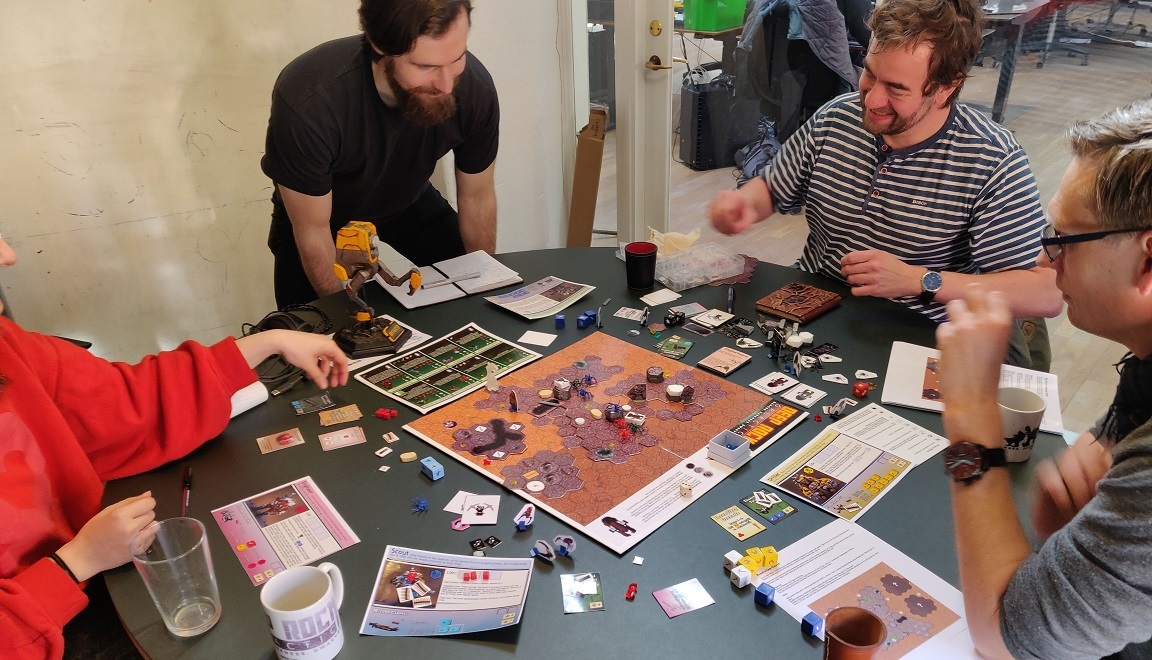 Playtest of the prototype at the Ghost Ship office - Leave no dwarf behind!


From Mockup to Production
When you start designing a board game, you just use whatever is in your toolbox to get things going. During the playtests, Ole, the designer, always had a box of mockup tokens and miniatures scavenged from other board games, and it helped us imagine how the game would play out. As the prototypes became more refined in gameplay, our friends at MOOD started supplying us with tokens and board elements that were closer to how the game could look in a finished version. Though, for the miniatures, it would take longer as that requires a lot of detailed modeling and 3D printing, so we have only tested with a few of those in the prototypes. For the final production, the miniatures will be created using molds in a factory setup, so that we can create as many as needed in high quality.

Part of the fun of this project is that this gives us a physical representation of Deep Rock Galactic, which is otherwise just a digital product. I’m personally very much looking forward to placing a magnificent board game box packed with DRG miniatures on my already overloaded board game shelves! 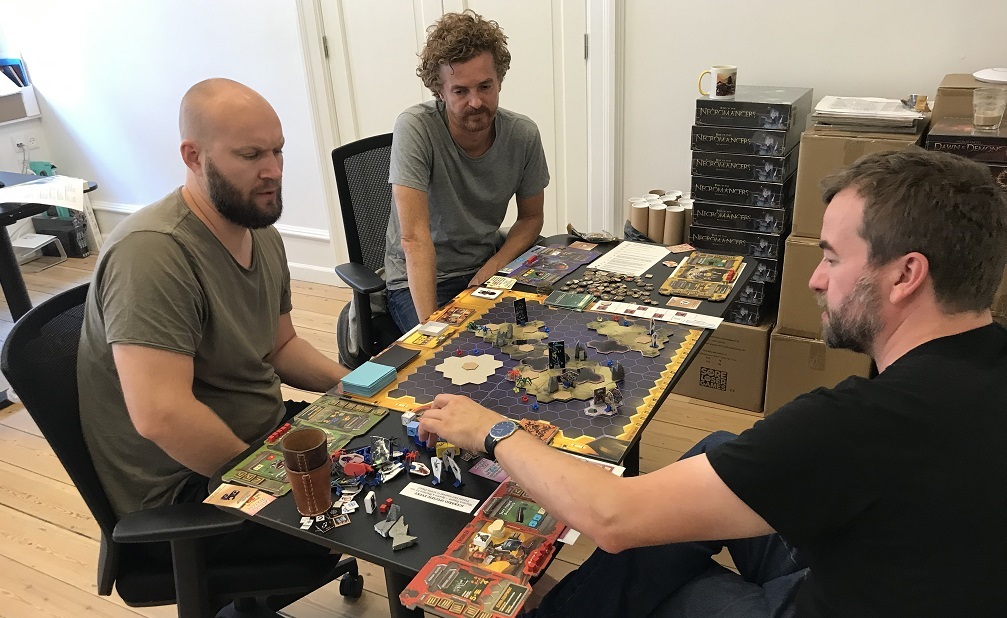 
Alright, I want it! When is it ready?
Right now, we don’t have a definite answer for this. We have a very good prototype now and everything is moving along nicely, but there is still a long way to go. First, we have to run the Kickstarter (and that will not start before sometime next year ), and then we will plan the actual production. When the factory has produced and packed the boxes, they will be shipped around the world to all the backers. And there is always a risk that they will get stuck somewhere - like in the Suez. So, we’ll need to be patient on this one.

For now, you can sign-up on our pre-Kickstarter page HERE[www.deeprockgalactic.com] and, of course, notify your friends to do the same! Signing up also gives you a chance to WIN your own copy!


Rock and Stone to the Board!