This patch contains several crash fixes, along with fixing some annoying bug habits, that should result in an increased work satisfaction of at least 6.37%. Also Doretta works better now.

--- PATCH NOTES ---
- Fixed Mobula Angels shatter animation plays where it was frozen not where it landed (DRG-2755)
- Removed physics causing the Drilldozer to freak-out when dying (it was fun while it lasted..)
- Refactoring audio input device changing, to fix issues with it.
- Fixed Mini-Mule Leg vanishes when dropped by Bosco (DRG-2495)
- Trawler will no longer drag people through doretta, refinery, minehead (DRG-2104, DRG-2223)
- Fix rare crash when quitting refinery mission
- Fix for old savegames crashing on startup
- Fix Insect Swarms in Hollow bough not dying when the nest is killed
- Fixed so tipjar can't been used while holding a beer
- Improvement to avoid the player getting s...

people like to add NSFW tags to bait clicks. Its annoying..

Hello Miners,
We’re celebrating that Deep Rock Galactic has spent 3-Year-In-Orbit! So this list is not so much a Hotfix as it is a list of the new things added in connection to the event - Since a lot of the stuff will be around after the event is over - there is however one fix for a bug that made the tutorial a bit funky.

--- PATCH NOTES ---
-Squashed a bug that made you play as Scout in the Tutorial mission instead of Gunner.

-Added tip-machine to the bar.

one guy did all the voices for the player dwarfs, namely Javier O'Niel, who is a 3d artist for videogames (and not part of ghost ship games as far as I know, prolly a friend of the devs or something similar), not a voice actor. the different dwarfs all use the same voicelines (except for a few class specific, like when you select a class or land with the droppod), only they are digitally pitch-shifted to different levels (if you listen closely to some of the voicelines, esp longer ones, you can hear that they are the same only edited)

the only other voicelines in the game are delivered by mission control, who is voiced by Robert Friis, art director and Co-founder of ghost ship games. also mission control looks very much like him too, so its basicly a self insert.

I will neither confirm nor deny those OUTRAGEOUS allegations that Mission Control is a self-insert. 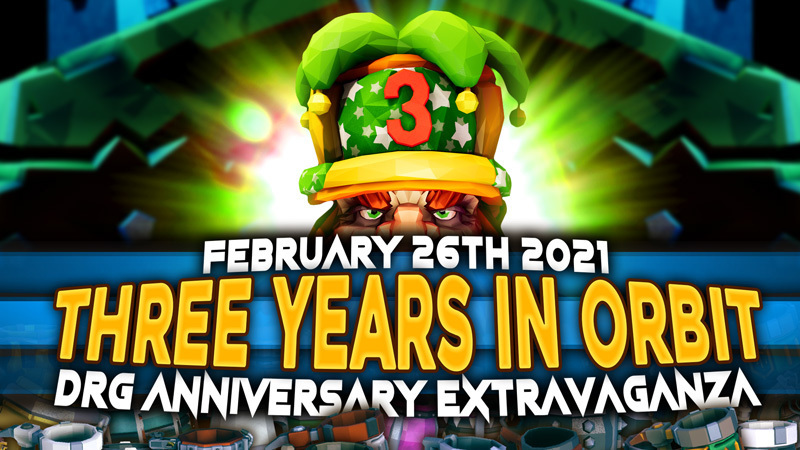 Hello Miners,
As we’ve mentioned, on Friday the 26th we will mark 3 years in orbit for Deep Rock Galactic and already starting this Thursday, we’ll be having a little anniversary fun.