Fault’s new HUD is here!
The new HUD is more than just changing the visual aesthetic of the display itself, but also changing how all information is presented to the player. To achieve this we have created custom animations and VFX/SFX to feed your eyes and ears the information you need in a satisfying way, without taking your attention away from the action. 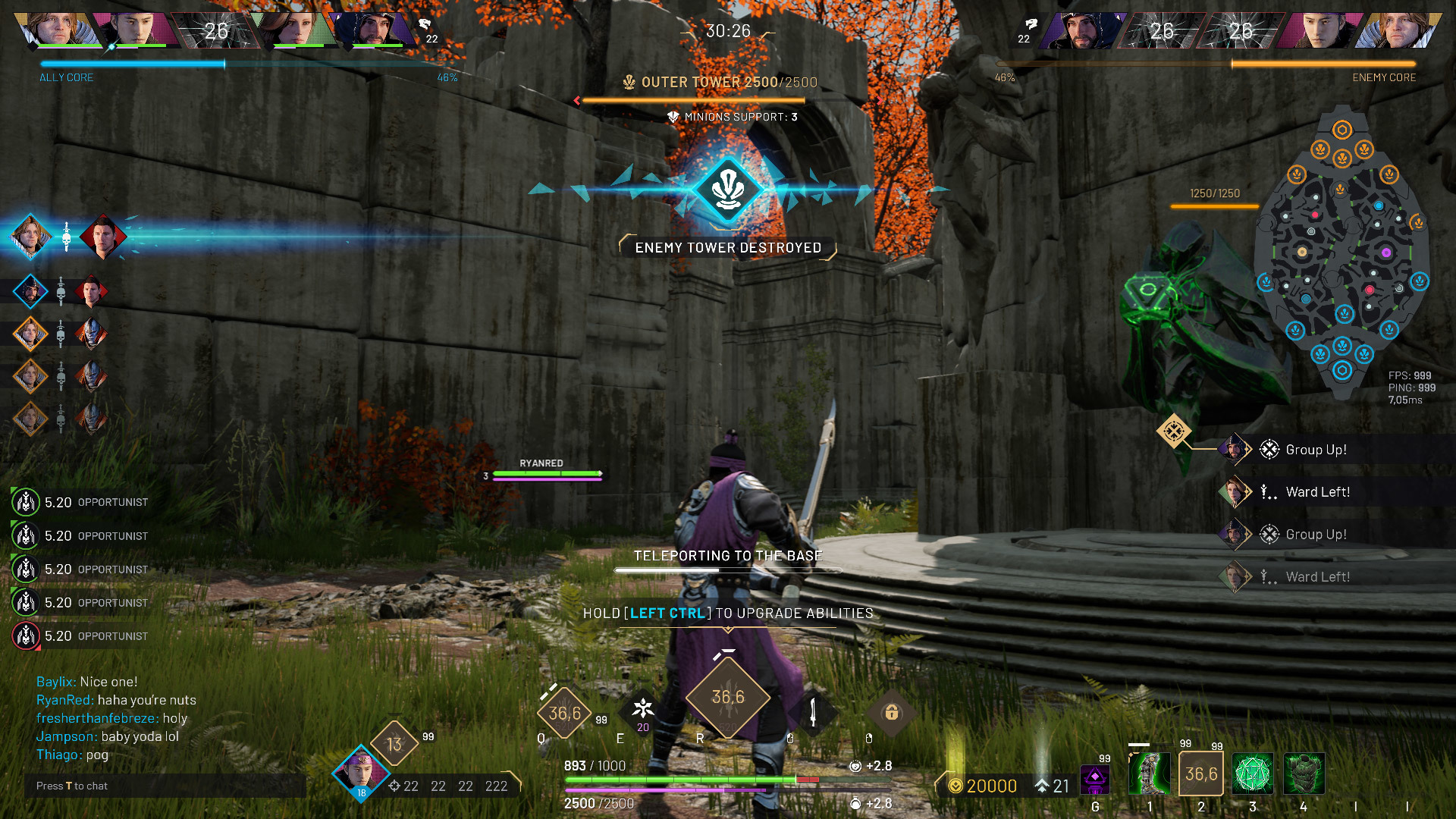 We wanted a HUD that holds all the information a MOBA game needs, combined with the aesthetic and clutterless feel of action games, and we feel we have achieved this in patch 0.13.0. We will continue to monitor the HUD and the community's reactions to it to further refine it as needed after release. 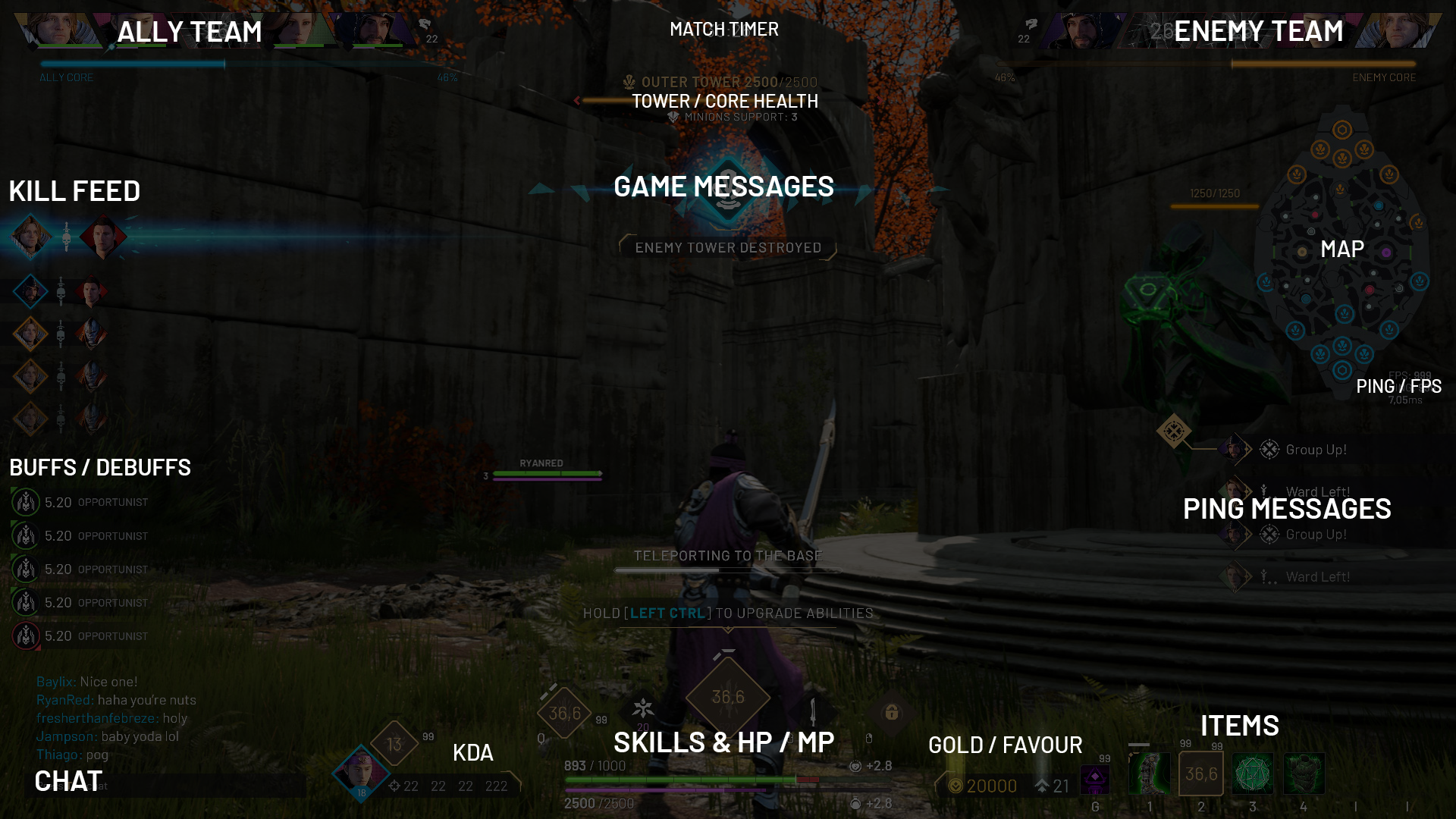 New Icons
With the HUD update comes an entirely new set of in-game icons for roles, status effects, and more! Be sure to study this image in preparation for the patch!

New Store
The style of the in-game store has changed drastically and new features have been implemented to help everyone navigate and plan out their builds in a more efficient way. 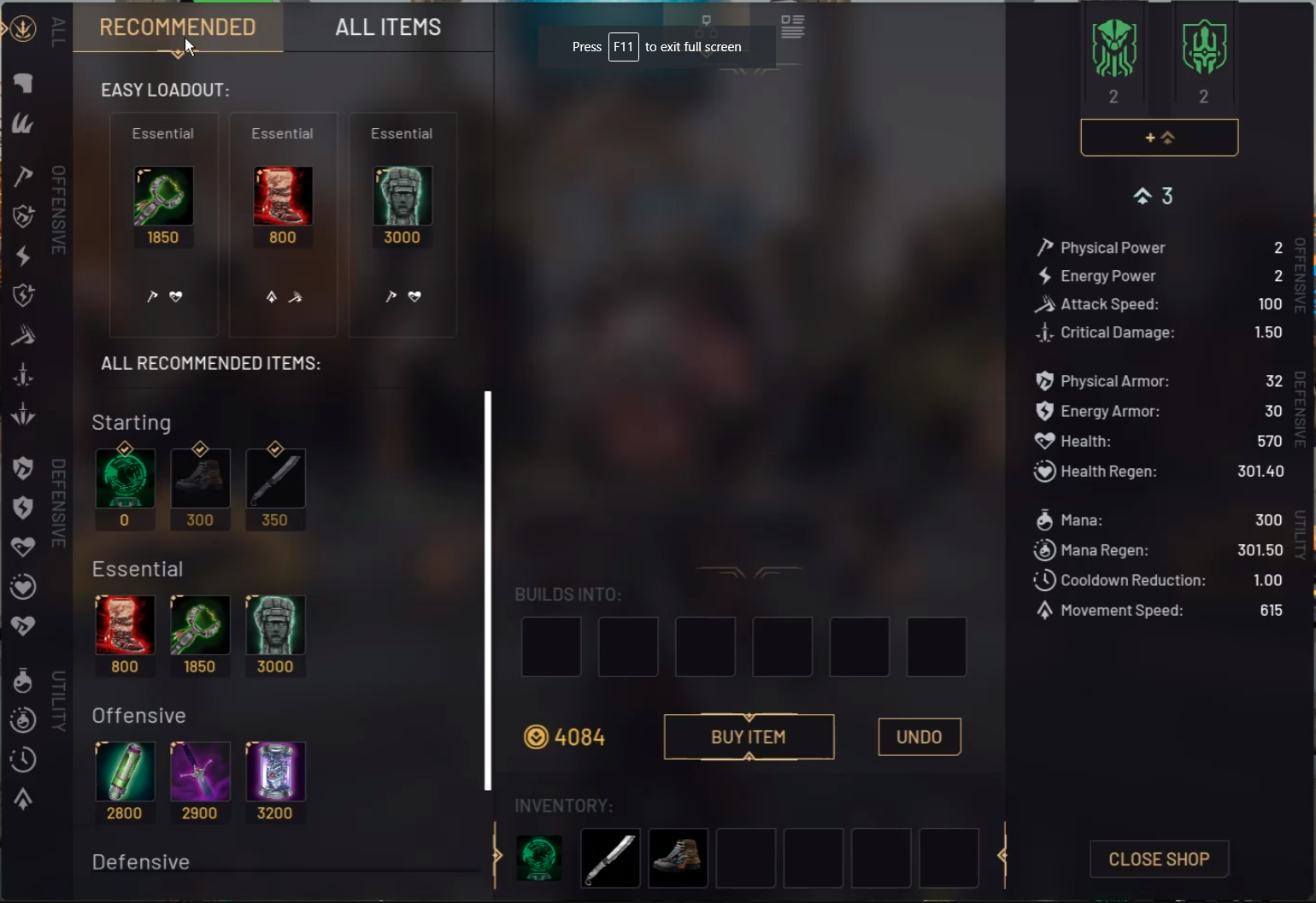 Quick Buy Feature
This screen will pop up when you return to base and will give you shortcuts to buying items from the recommended tab without needing to open the shop. The quick buy shop will also reflect player's custom builds in the future when we add the option for all players to preplan their builds in the main menu. 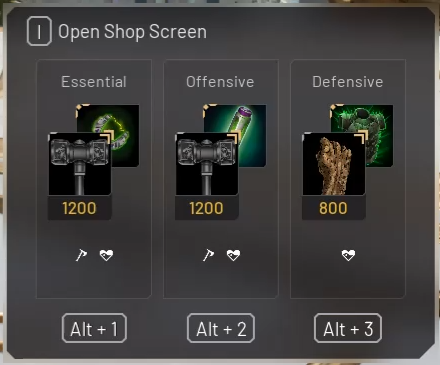 ‍
Refined Recommended Tag
This new system will help new players decide on what items they should buy throughout the match. The recommendations come in 3 stages; The first being a suggested set of starting items to get you going, the second phase will recommend up to three essential or “core” items, and finally, the Easy Loadout feature will continue to give you multiple options best suited to your hero and role to help everyone quickly choose their builds and get a feel for what items are best for each hero. 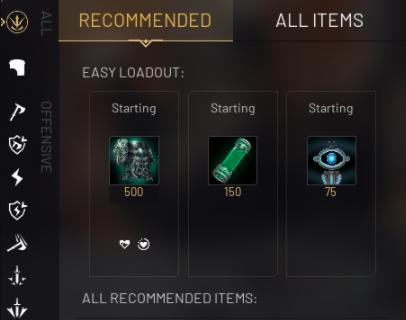 ‍
Death Recap
We now have a full death recap feature and will provide you a full breakdown of all damage taken leading to your hero's death.

‍
Ping System
Our new ping system has been designed to be much easier to control during the heat of battle, and many new animations have been added to ensure your team hears you loud and clear. 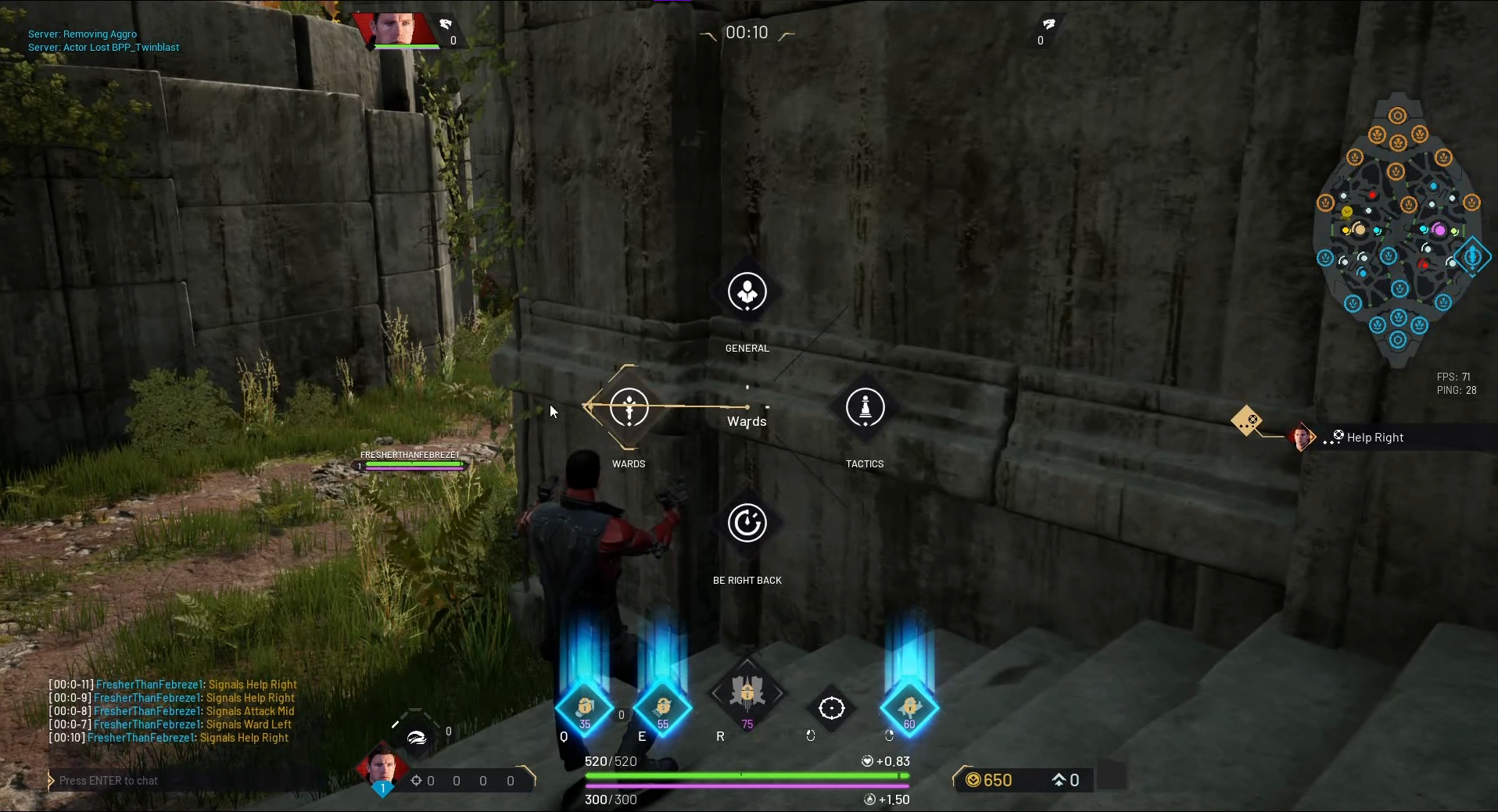 New Scoreboard
While creating our new scoreboard we have added a few things to the scoreboard itself, such as buff timers, stats on hover, and the option to mute/report players. 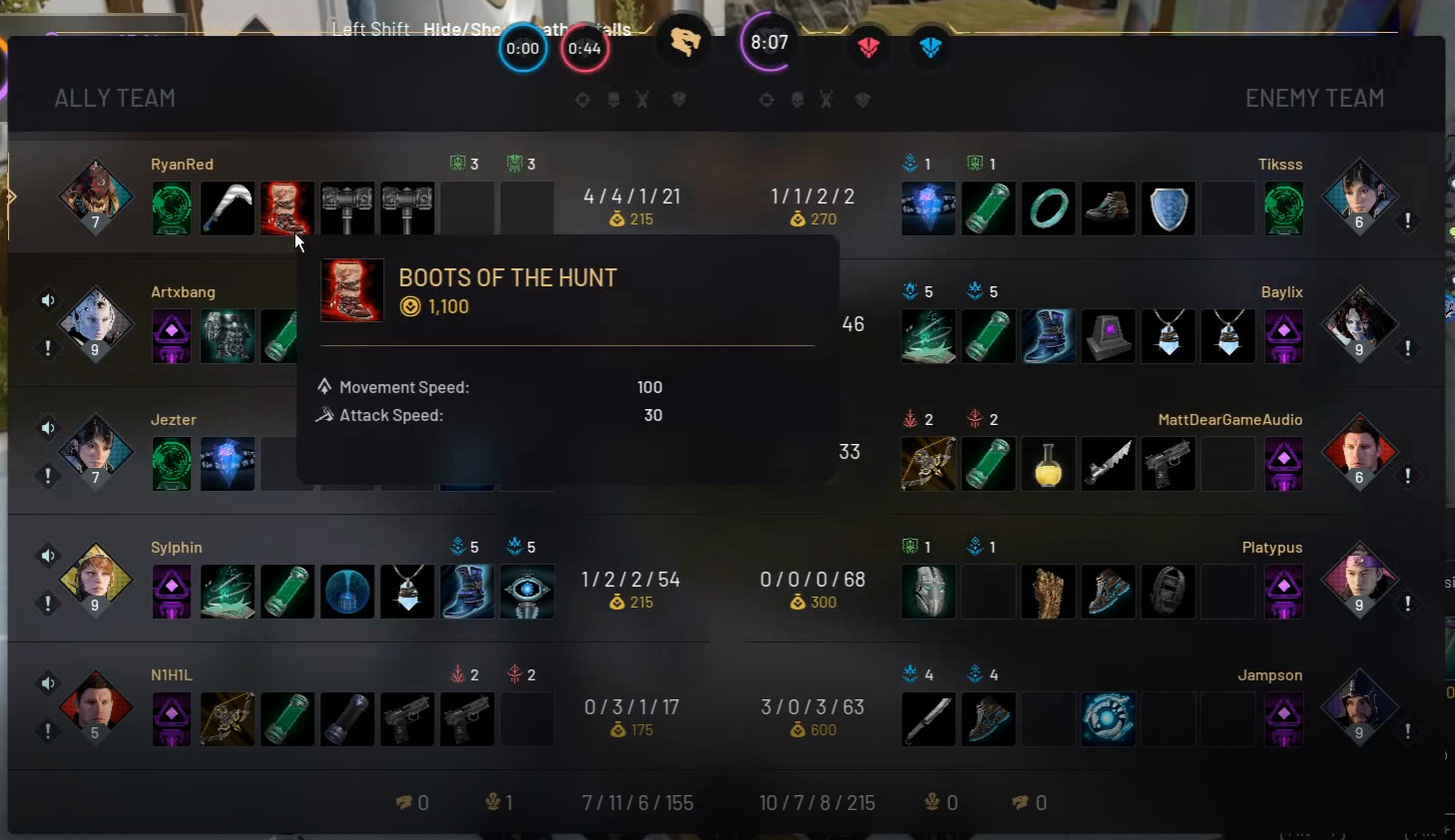 New Victory Screen
This screen will pop up after the match has ended, providing everyone's stats for the match along with an area to add new friends or report players if necessary. 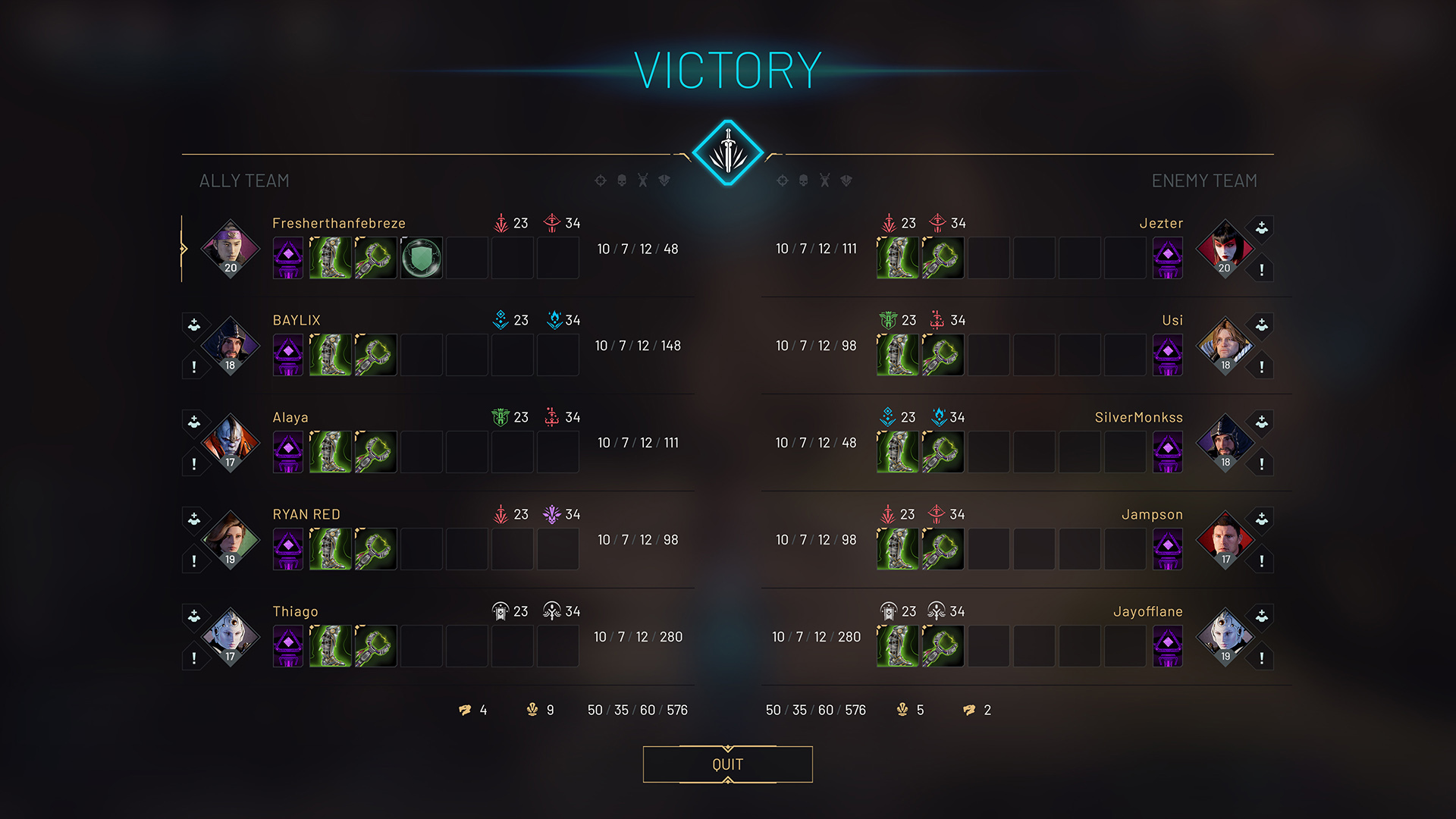 Gameplay
Ability Cast System Overhaul The new casting system will affect many aspects of gameplay like the way stuns affect players and opposing heroes' abilities/cooldowns, how/when mana is consumed, and much more. The main purpose of this rework is to improve smoothness and immersion during fights and, along with our new client prediction systems, it will drastically improve how the game feels overall.

Client Prediction Improvements
We have completely reworked our projectile system and ability system to contain far more client predictions to allow for a smoother experience overall on all ping levels. The major feature of this rework is a new client prediction code that allows the server and client to be in sync as much as possible. For projectiles, this will hopefully fix false positive hits such as Narbash thunk bug. Furthermore, it will allow for perfect VFX spawn locations that are in sync on all clients (such as on hit VFX) which should make the game feel smoother and consistent overall. For aiming abilities, this will allow the client and server to be 100% in sync as to where you are aiming when you confirm the ability. Also, a lot more gameplay effects will be predicted on the client to create a smoother experience with as little delay/lag as possible.

Projectile Accuracy Improvements
We have improved projectile travel to give a significantly lower amount of false hits on clients when playing with a moderate to high ping. Client prediction already makes the moderate to high ping experience comfortable enough within reasonable thresholds, this will improve the experience even further by making the results of projectile travel and hits more reliable.

VFX System Rework
Place Holder Dev Comment: This is a large step towards a quicker hero creation pipeline, it is a full technical pass on how VFX runs but also a re-design of the tools used for that purpose. It is also part of our efforts in creating systems that will stand the test of time as the game grows in the coming years.

The rework will provide the infrastructure to add many features in coming updates such as:

Even though this rework is mostly technical and won't immediately show results (They will rather incrementally show up throughout future updates), it has also given us the opportunity to do a remaster of hero VFX used throughout the game. So you will still notice minor or major improvements per-hero like adding more VFX where it's lacking or fixing sync problems between gameplay and VFX.

SFX Overhaul
Our sound designer grinded out a ton of new audio to help feed your ears the proper information in a cleaner, more readable way. There is so much new audio in-game that we felt it would be best to provide only a list/samples of SFX that notify of major gameplay moments.

Map
New River Objectives With Patch 0.13.0 we have implemented three new Shrines into the map. These new objectives will grant buffs when destroyed and give players a new goal to fight over in-game. These new shrines will add more options/versatility when planning your jungle pathing or lane rotations during a match.

There will be two Shrines located on either side of the mid lane that grant the Ancient's Blessing buff when destroyed, increasing XP gain by 5% and Mana Regen equal to 0.5% of missing Mana for 90s.
‍

The final shrine can be found by the duo lane and grants 15 additional Gold per minion killed for 90s.

‍
Steam Badges
Steam Badges are craftable items that you can display on your Steam profile by collecting an entire set of Trading Cards. The more you craft, the higher your Badge level! Trading Cards can drop into your Steam inventory by simply playing the game, trade them with friends or sell/buy them on the Steam marketplace. In addition to Badges, you also have the chance to receive Steam Chat Emoticons & profile Backgrounds when you craft one! To read more about Trading Cards and how they work, you can do so here. 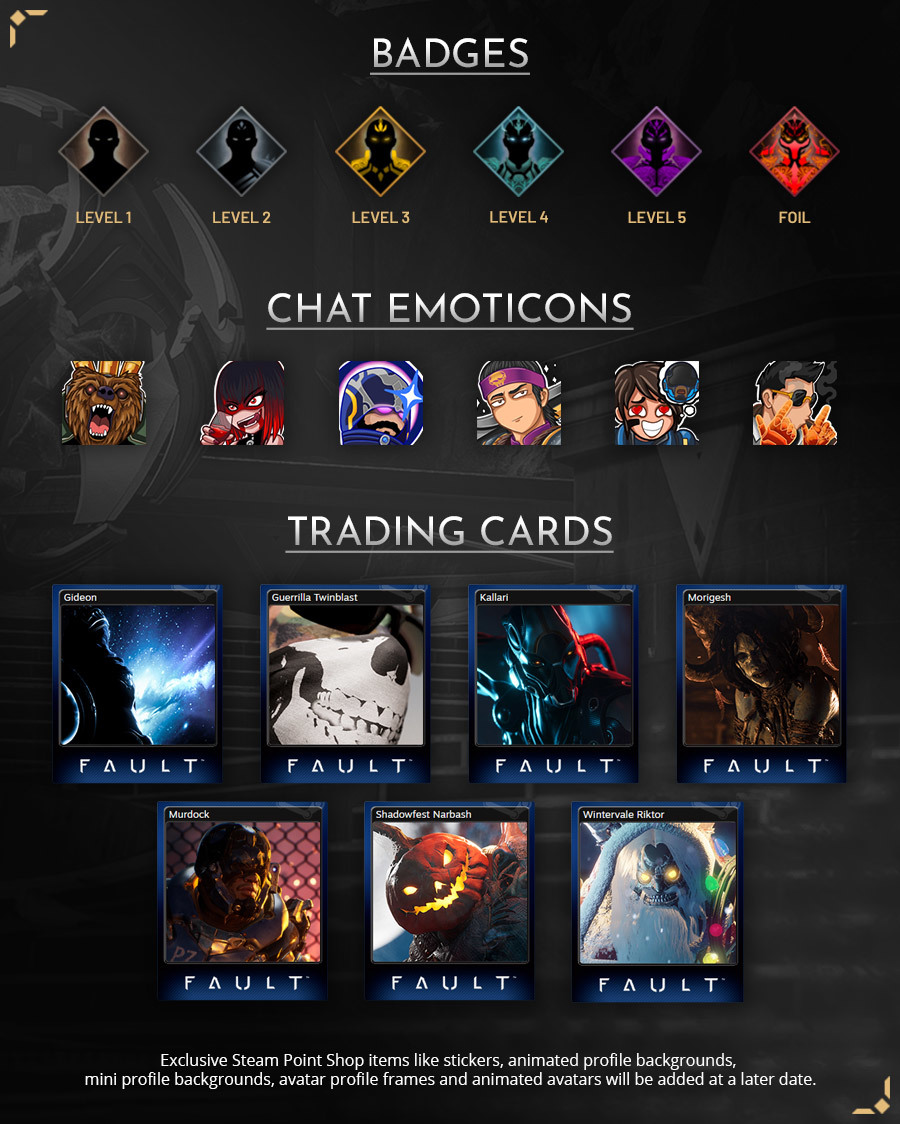 Narbash Song Of My People (E):