We know that you have been waiting patiently to know what�s going on for next year in For Honor. We are excited to announce, today, what we have planned for Year 4: The Year of Reckoning.

From launch three years ago to For Honor today, we are incredibilisly proud in the progress the game has made, none of which would have been possible without the unique relationship that we�ve built together with you, our players.

Year 4 is about learning and building upon what we have experienced together in these past 3 years. Let�s keep the party going!

We�ll be able to share more details in January 2020 but here is an overview of what�s in store.

Year 4 � The Year of Reckoning
The Year of Reckoning is a turning point in For Honor�s history. The great war that has been raging over the past years takes an unexpected turn. The earth has quietened down, but new leaders arise and warriors across all factions need to decide what they are really fighting for.

Four Unique Seasons and Two New Heroes Joining the Fight
Like Year 3, Year 4 will have four new Seasons, each with its own theme, rewards, and activities.

You will be able to purchase them upon release or unlock the new Heroes with steel as usual.

Seasonal Progression Update: Battle Pass in, Year Pass out
Starting with Year 4, Season 1, we will be introducing a new reward system with the For Honor Battle Pass.

In the past, rewards relied solely upon random drops after matches and scavenger crates, which gave little visibility on the items you were able to unlock.

Now you will have clear objectives throughout the 100 tiers within the Battle Pass where you will be able to unlock items through gameplay. The battle pass will be limited to character customization items and consumables meaning that you do not need to purchase it to have access to the two new heroes coming during the year.

The For Honor Battle Pass will consist on a Free pass and a Premium pass, with a shared progression across the different tiers and resetting with each new Season.

Everyone will have access to the Free pass and its rewards. In the Free pass, you can unlock items such as ornaments, steel, color swatches, champion status, embossings, and more.

Owners of the Premium passes will have access to unique customization rewards such as new signatures, new weapons, new executions, new effects, and more.

Both free and premium passes will have rewards for all heroes.

It was also important for us to make the Premium pass an addition to, and not a substitute for, the existing means of getting content in the game. Thus, we will be keeping original options for players with new content of the week, sales, and scavenger crates /drops at the end of the matches to get customizations items.

We will have more details to share on the Y4S1 Battle Pass and the season itself in January 2020.

Fight - Core Experience
With 26 heroes in the current roster and two new faces joining the fight in Year 4, balancing remains a top priority for us. This includes hero balancing, of course, but also game mode balancing.

A major step toward strengthening our process of balancing has been the introduction of Testing Grounds.

For Year 4, you can expect this tool to have a big role in how the dev team continues to bring changes to the game. The focus of the year remains on increasing character viability, allowing for a wider range in team composition at a higher level of play, and continue to improve offense to enhance the core gameplay of For Honor on a more general level.

Competitive
The competitive nature of For Honor has been part of the experience since the get-go. One of the main reasons why the competitive scene has continued to grow over the years is thanks to you guys who have supported it at a grass roots level. Year 3 was the first step in better supporting the tournament/competitive scene of For Honor, with more visibility on community tournaments, in-game prizing, but most importantly the introduction of the spectator mode.

The competitive scene is extremely important to us as it is to you. It helps us grow the community and is ultimately a compass in shaping the experience of the game. It is a pillar which we intend to expand on in Year 4 with a new all-access competitive program set to launch.

More details will be shared soon.

More to Come
We will expand on all of these elements in January as we get closer to launch of the Year of Reckoning, we are really excited for what this year has to offer!

Lastly, we want to thank you for all the creativity that you guys have shown us over the past 3 years. Whether it be cosplays, fan-fiction, memes, videos, and fan art; we felt inspired for Year 4.

That is why we will be working with renowned artists for each season�s iconic image, starting with the Year 4 image below, made by the American illustrator AJ Frena. Representing the Year of Reckoning, we are proud to be able to share her piece of art with you all today and cannot wait to share more details later in January for what�s to come in For Honor. 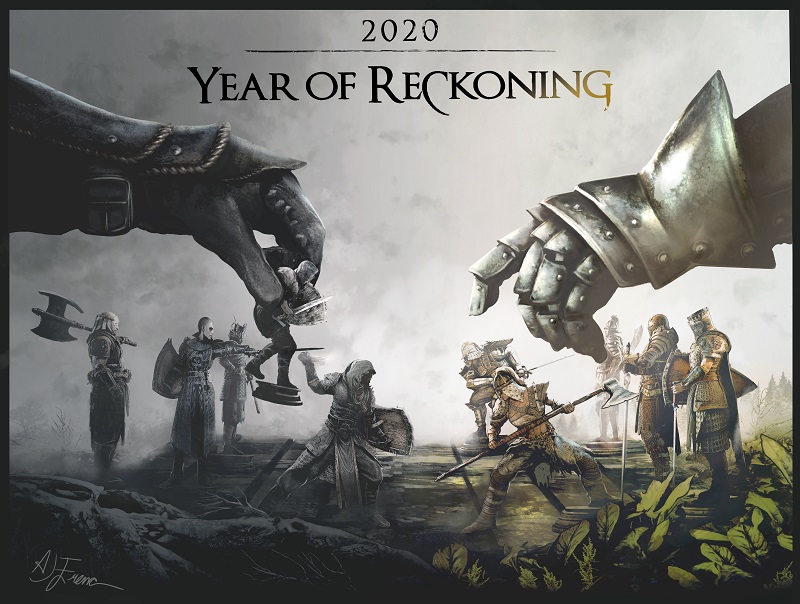 Oh! And one last thing� new armors are coming this year.

For Honor Dev Team
← More from For Honor