Beginning 22nd October 5pm PDT and ending 25th October 10pm PDT, you will have just over three days to experience the raw beauty of our latest biome. 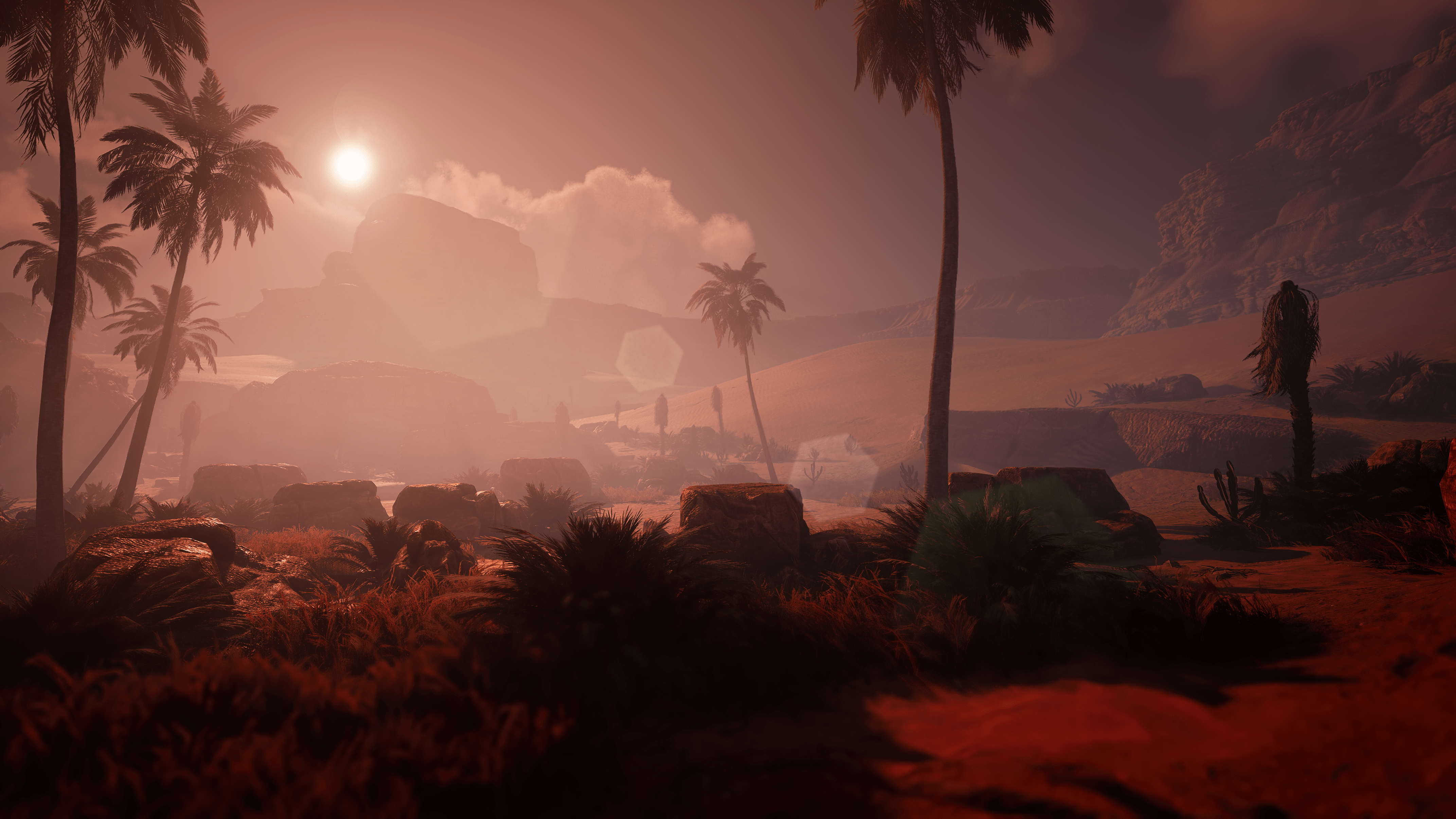 MISSION BRIEFING: BLACKSAND
Journey to the heart of Icarus’ uncharted desert biome, enduring arid conditions to gather survey data for the UDA. But beware – threats are unknown, and few have returned from this barren region.

With no trace of their whereabouts, we can only recommend you watch your step.

There have been rumours of a subterranean route to the desert, but Minos, the gas giant planet nearby, exerts such immense tidal forces, so these paths are anything but stable. You’re on your own out there.

Certain stages of the mission will require a member of your team to be at minimum, level 25. It will also require certain recipes, so save some blueprint points.

New challenges
The desert biome brings with it a whole new arid environment. Scorching heat is just one of the challenges – be on the lookout for wildlife that feels familiar but shouldn’t be trusted, weather that threatens even the most seasoned Prospector and geological limitations that may force you to plan your route.

Heat - Keep an eye on both the environmental temperature and your character’s. Thirst and heat can drain your stamina and you’ll need to rehydrate more often - so managing your water intake wisely can become critical. Wear appropriate armour and clothing that offers protection but doesn’t overheat you.

Water - The Desert canyons have been carved by both water and Icarus’ powerful geotechnical forces. Remember where your water sources are before venturing into the sands – there’s nothing more painful and frustrating than slowly slipping into hallucinations as you dehydrate.

Cold - Remember, deserts are not always hot. At nighttime the temperature can plummet too.

Flora- Plant life like fiber and wood will be harder to harvest in the arid Desert. You may want to stock up on ingredients for Pills such as the Anti-Poison Pill from the Kitchen Bench or Tonics from the Herbalism bench and before you leave the relative safety of the Forest.

Sandstorms and heatwaves - These aren’t storms for the faint of heart. There’s nothing more violent than the ground around you shifting, lifting and flying in your face. Don’t take a storm warning lightly, and make sure shelter is always available.

New Wildlife
While we won’t spoil all the new wildlife for you, here are a few of your new neighbours: 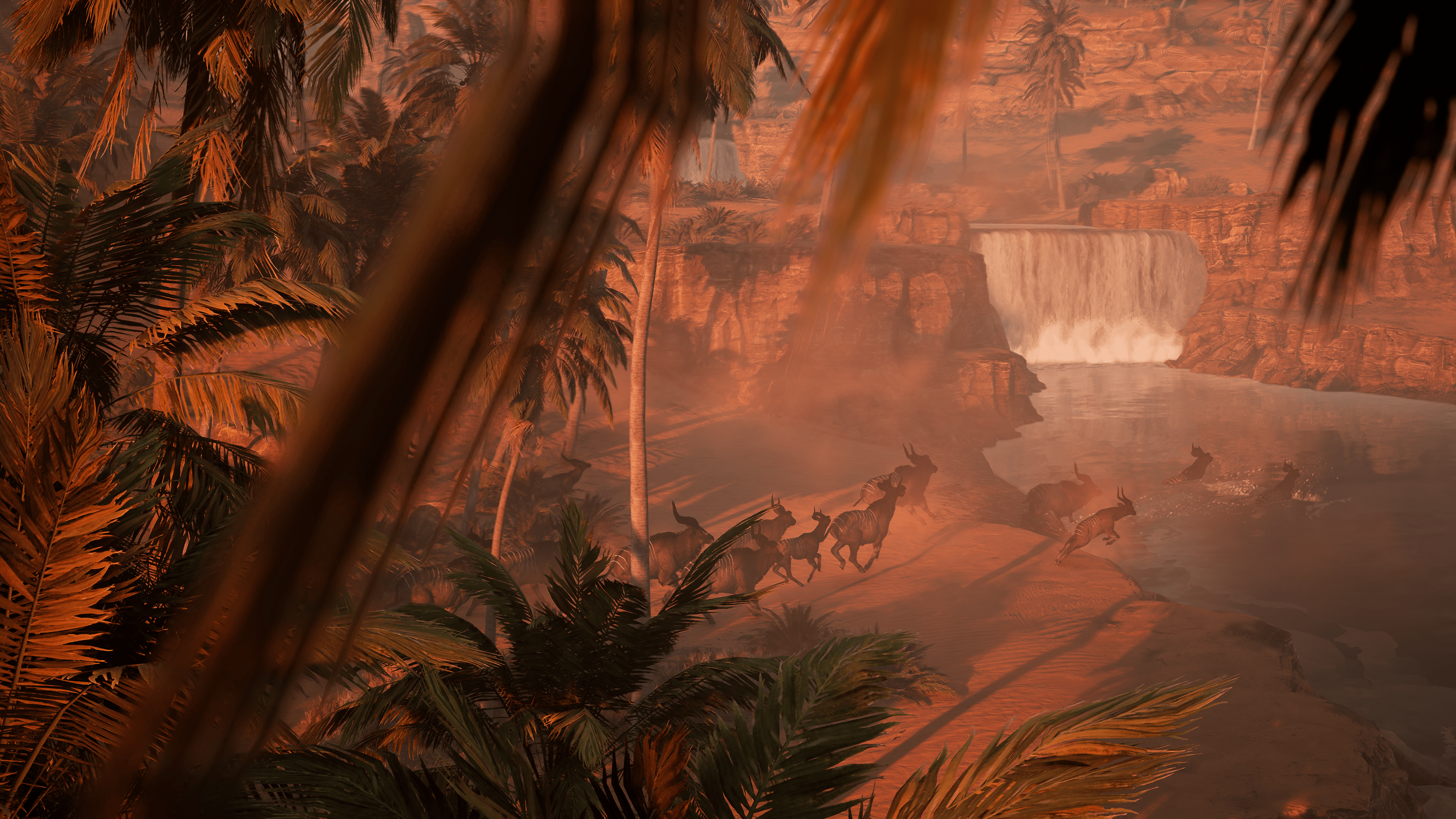 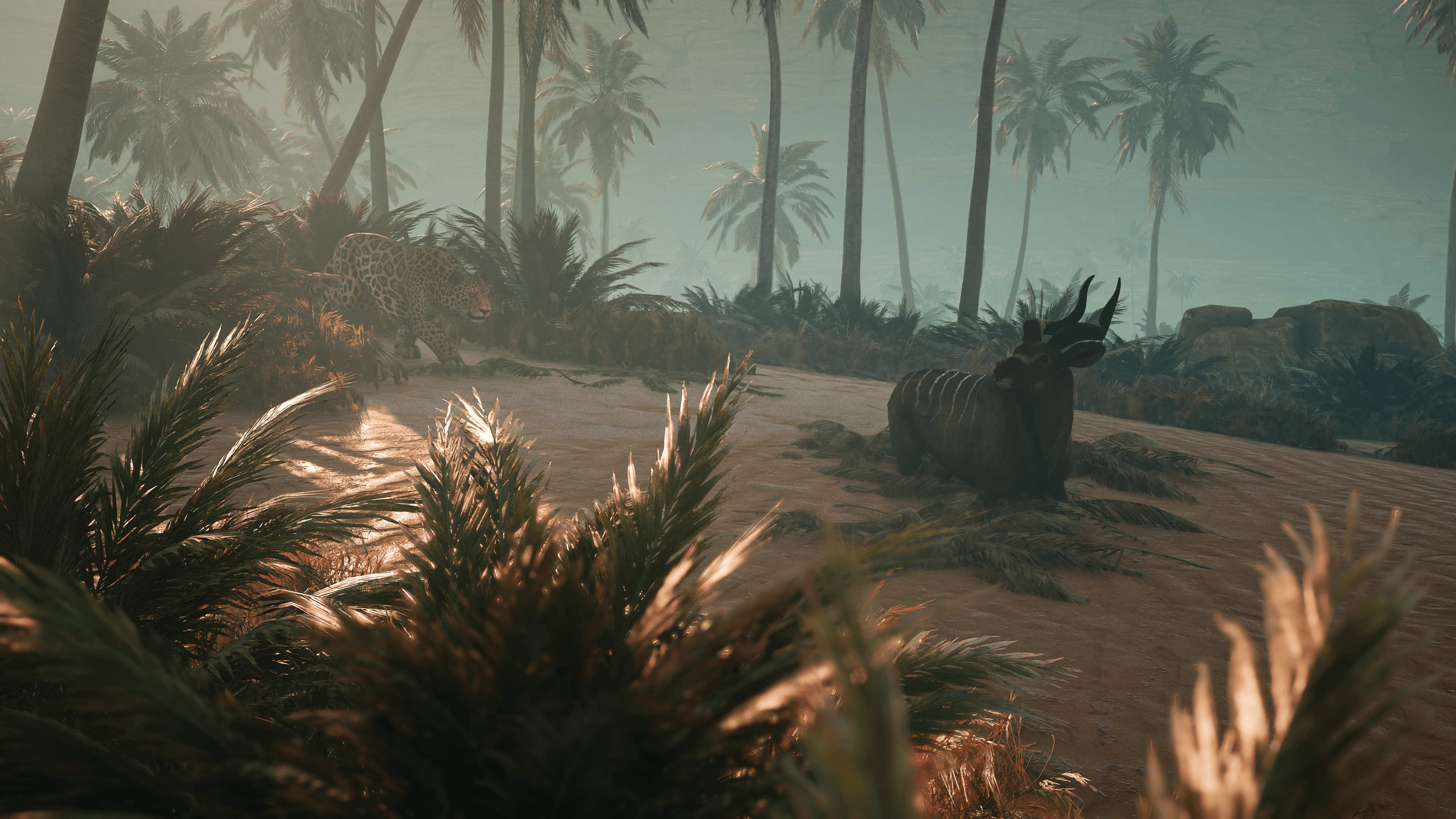 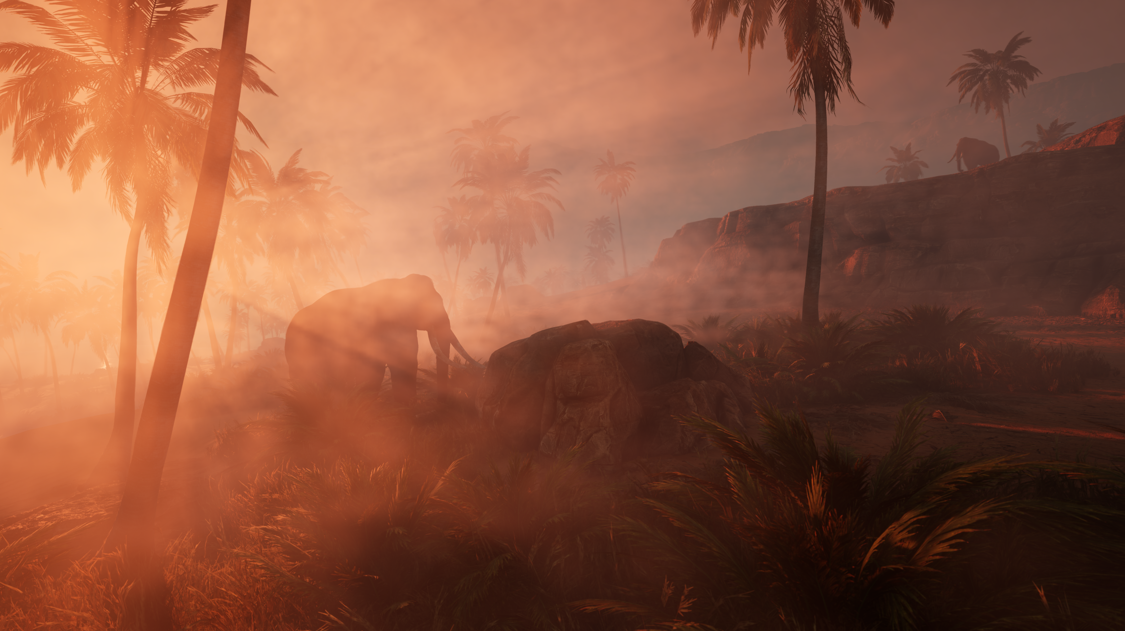 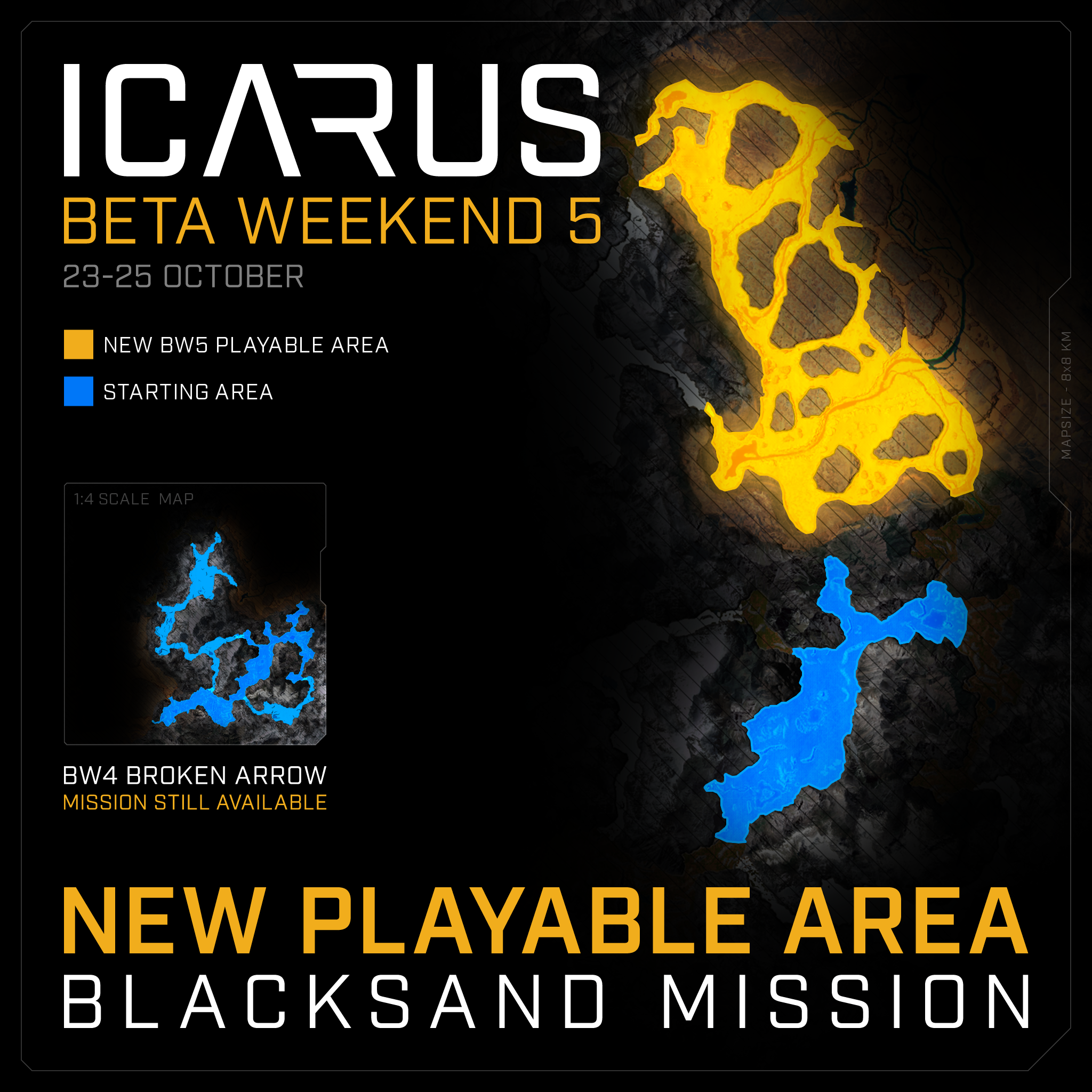 Your playable area for Beta Weekend Five’s Blacksand mission includes the Forest starting area, then opens up the desert canyon to the North West. The Arctic is not accessible on this Prospect.

The Prospect from Beta Weekend 4 (Broken Arrow) is still available for you to choose and includes the Northern and South-Eastern Arctic zones, if you have unfinished business with polar bears.

Your level cap is at 30 again this weekend.

Extra Day (Again!)
Monday here in New Zealand is a national holiday, so we’re extending the Beta Weekend by one extra day again, so the team doesn’t have to put a new build out on their day off. This also gives you more time to complete the new Mission: Blacksand and last week's Mission: Broken Arrow.

Please search to see if your suggestion has already been posted before you submit, and upvote it if you find it!

We love it when you share your screenshots and clips with us. Be sure to tag us @surviveicarus on all socials, and join our Discord server[discord.gg] to hang out with us and our community over this Beta Weekend!

Patch Notes:
Below is a selection of key bug fixes and QOL improvements that we’ve actioned since the last Beta Weekend. This doesn’t reflect every change, but gives you an idea of where our effort has gone. Thanks - many of these bugs were reported by you on Feature Upvote[icarus.featureupvote.com].