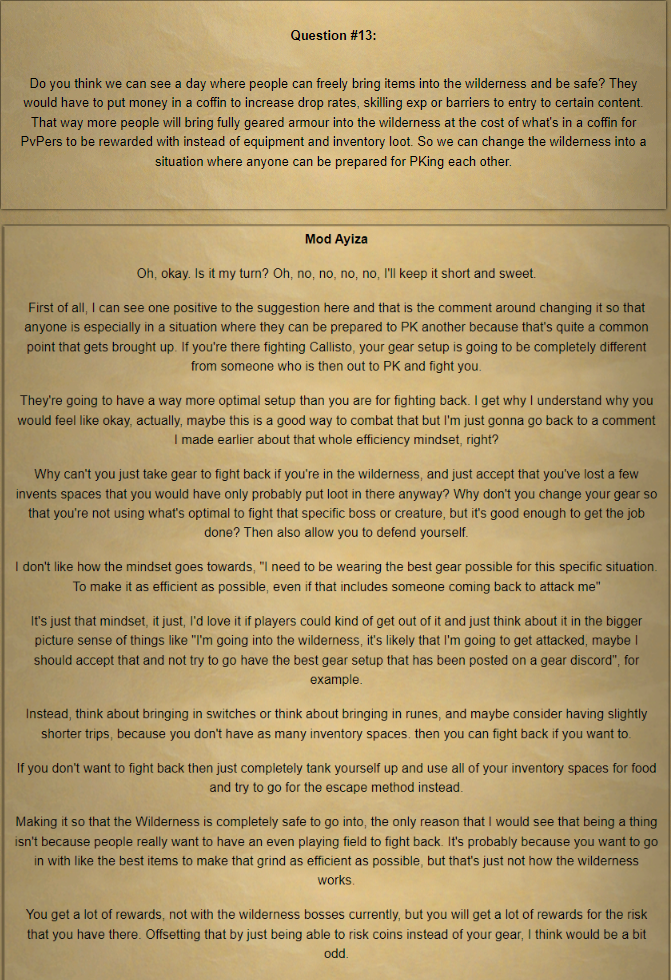 Would just like to say that these statements are coming from a Q&A summary, so the discussion is very casual; these aren't formal statements that are written. This is literally a transcription of a verbal conversation.

Mald all you want, that is fine. But saying to FIRE MOD AYIZA BECAUSE HE IS PRO-PVP, is pretty ridiculous!

I'm still not over the last post, could you have left this for Friday or something :(

Do you have a legitimate reason against efficient gameplay?

I don't have one at all! I love efficient gameplay and typically strive for the same myself when playing.

But in the context of this stream, it was more a topic of conversation to draw in discussion. I was trying to be more question based rather than giving my opinion on it all, and the chat seemed to be really involved.

That being said, I don't like how some negativity towards certain aspects of the game is based on an efficient mindset. Doesn't mean I don't appreciate efficiency though, but it'd make things much easier if it wasn't a thing :D

Also without the context of reworked Wilderness bosses and other changes, what was said really doesn't match up with current player experiences.

I'm sorry Mod Ayiza, I honestly did not expect people to come at you with such toxicity. I was just really happy to see that an official jagex moderator was able to give representation to the pvp community in a fair way. It was extremely refreshing to read the Q&A - I think what you're doing is absolutely great.

No need to apologise honestly! I said the words at the end of the day and I could definitely word things better :)

Glad you enjoyed the read. I'll continue supporting PvP as I do any other aspect of the game (apart from comp cape!!)