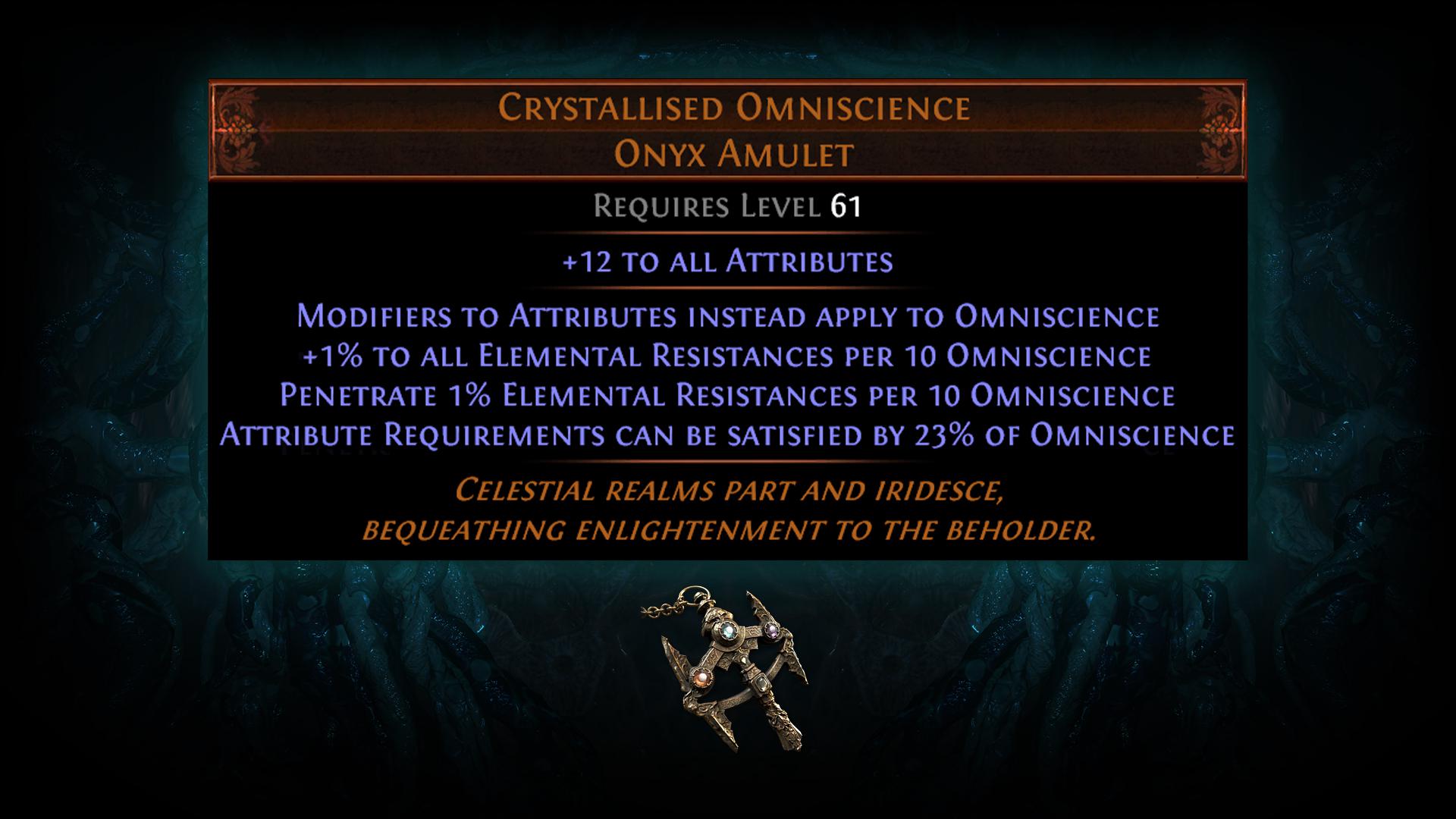 How does this relate to base stats. I assume wit these not being "modifiers" that they aren't change to Omniscience (just asking to be sure)

As written, neither of those. Omniscience doesn't do anything with your actual values of attributes, just the modifiers to them. If you have 100 Strength, then 32/23/20/14 of that (depending on class) is base Strength, which you innately have and isn't from any modifier.

Fun Fact: "You have no Intelligence" is also a modifer to an attribute, which can similarly be made to apply to Omniscence instead. If you're using this item, you probably want more than zero Omniscience, so I recommend not combining this with [[Actum]].

No, neither this item (which does not do any conversion), or actual conversion work that way. Modifiers in PoE can never apply more than once to the same base value. A modifier either applies or does not apply.

I bet someone will find a way to use both just because of this post :)

We can but hope.

Just to be clear, this also means that "+X to All Attributes" will add X omniscience with this item, not 3X.

I was searching for attribute modifiers besides increases, reductions, bonuses, and penalties. Is Actum the only exception to this?

I believe so, yes. I was pleasantly surprised when I looked through all the attribute modifiers to see what weird stuff we'd have to support and only found that one.

The new amulet says:
> Modifiers to attributes instead apply to Omniscience

The wiki says:
> A modifier applies statistics, a buff or grants a skill to an entity. Modifiers are specific to items, monsters, strongboxes or areas.

u/Mark_GGG I'd like clarification on whether passives on the tree are considered modifiers and will instead apply to Omniscience. A simple example: will having the passive Beef instead give +30 Omniscience.

A lot of things would break if being put on passives somehow prevented modifiers from being modifiers.

For these purposes, is Devotion considered to be an attribute, or are STR/INT/DEX the only ones?

Devotion is not an Attribute (nor is Omniscience).

No - this is already handled because other items with an int requirement could be granting str/dex you need to equip Actum. Actum will be disabled in this case.

That doesn't make any sense though.

You have a total of x attributes but they get divided by the number of attributes creating a sum of less omni than total attributes?? Like wut

I have no idea what you're trying to say.

But he stated earlier that you still get the attributes, they just don't apply to your character as they normally would.

I'm sure they are far more adept in c++ than I am, so they can easily write up a bit of code that would be able to do this. I'm curious as to why they aren't, and for what purpose it has been intentionally made to function this way.

But he stated earlier that you still get the attributes, they just don't apply to your character as they normally would.

I don't know exactly what you mean by this, but I don't believe I've stated anything of the sort.

The item makes the modifiers stop applying to attributes. Therefore they will not modify attributes. The character will have their base attributes, which come from their class, and not be able to modify them further.

/u/Mark_GGG are Curtain Call's...um..."requirements on attributes" counted as attribute requirements in the context of this item?

Similarly, are they modifiers to attributes? What about the "+1 Life per 4 Dexterity" on Shaper's Touch?

"+1 Life per 4 Dexterity" is not a modifier to attributes because it does not modify attributes.

Yes, I read that as well. It still doesn't make any sense at all.

Just because it's one modifier doesn't mean it grants half or a third the amount of attributes.

One modifier affecting two attributes still affects two attributes. This bothers me on a very fundamental level to an extreme degree.

30 Dexterity is a total of 30 attributes.

12 All Attributes is a total of 36 attributes.

I cannot brain on how function why this way it does.

Modifiers don't change how much they modify things based on how many things they are modifying.

A modifier giving +2 to level of socketed projectile gems will give +2 to the level of a projectile gem socketed in that item. If you socket a second projectile gem, that one will also be affected by the same modifier, and also get +2 to levels. The total amount of change you get is 4 gem levels (two on each gem), compared to 2 when there was only one gem, but that doesn't matter. The modifier applies a consistant modification to each thing it can apply to, regardless of how many such things there are. It doesn't start giving only +1 to each of the two gems to keep the total the same.

← More from Path of Exile