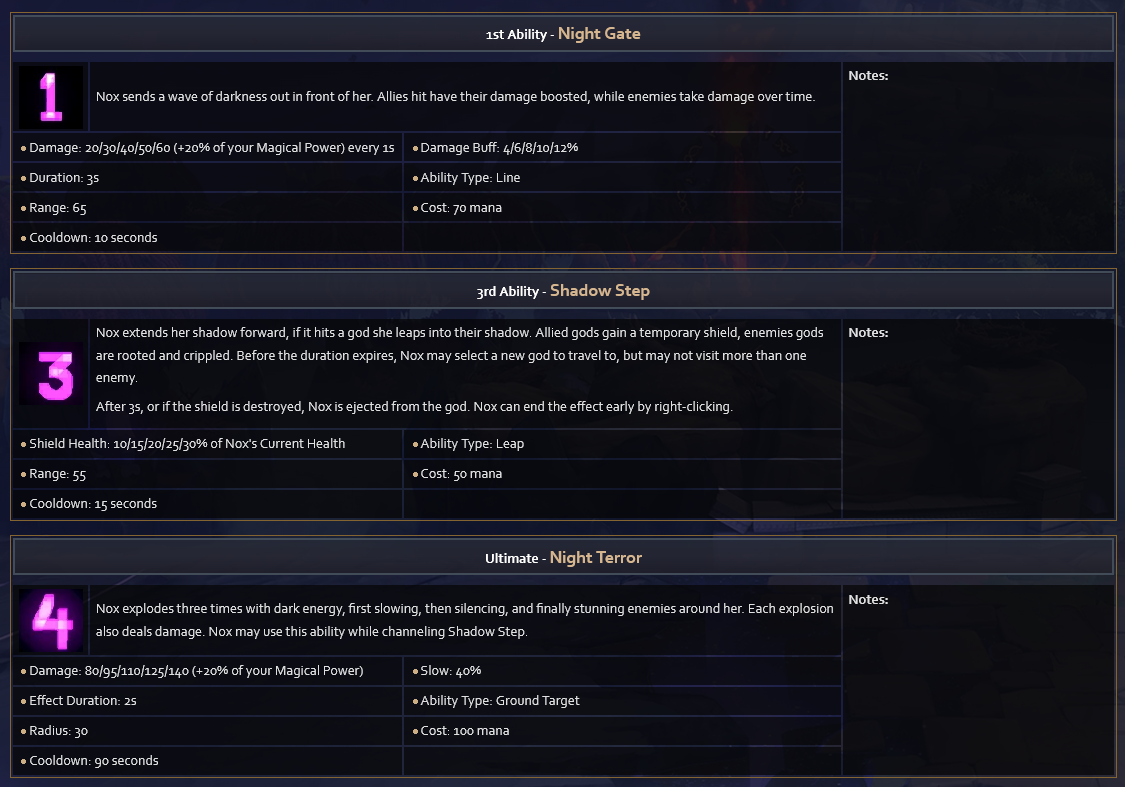 For those who don't know, Nox had to be reworked back in 2015 because her original kit was an absolute mess (how bad you ask? she had an ability that countered her own ultimate). After several tweaks and minor reworks, she eventually got a full rework.

What most people don't know is that before her current kit was finalized, there was a whole other kit that got scrapped and never saw the light of day.

These are all leftover tooltips of that scrapped rework. Her 2nd ability would have been her current 2 (the aoe that silences you if you stand in it).

Edit - Something I forgot to mention: Her ult sounds familiar right? That's because it is Amaterasu's ult, which was originally Guan Yu's ult back when he was a guardian. Nox rework was done in 2015 while Amaterasu was released in 2016. Had this guardian kit come out, Nox would have been the one that brought old guan's ult. back.

I designed Amaterasu's Ult and I have never seen this ability description in my life. I can assure you Ama's Ult was not inspired by Nox in any way, it was 100% only inspired by old Guan and any similarities are pure coincidence. The rest of the team really liked the pitch as a reference to old Guan, so I don't think this Nox kit was intended to look, feel, or reference old Guan.

I also don't know much about this whole nox rework phase, as I hadnt joined the team yet, so I dont have much else to share on it.

Not saying you borrowed from this kit, just that someone else must have also had the same idea to bring Guan's ult back before Amaterasu's kit was a thing.

Fair enough, I just had the information on that specific part of your comment so I felt compelled to clarify.

Id have to ask around some more to find out about this kit, I know the team was not satisfied with a few iterations of Nox before they ended up with the current one. You really have unearthed an interesting fossil here lol!