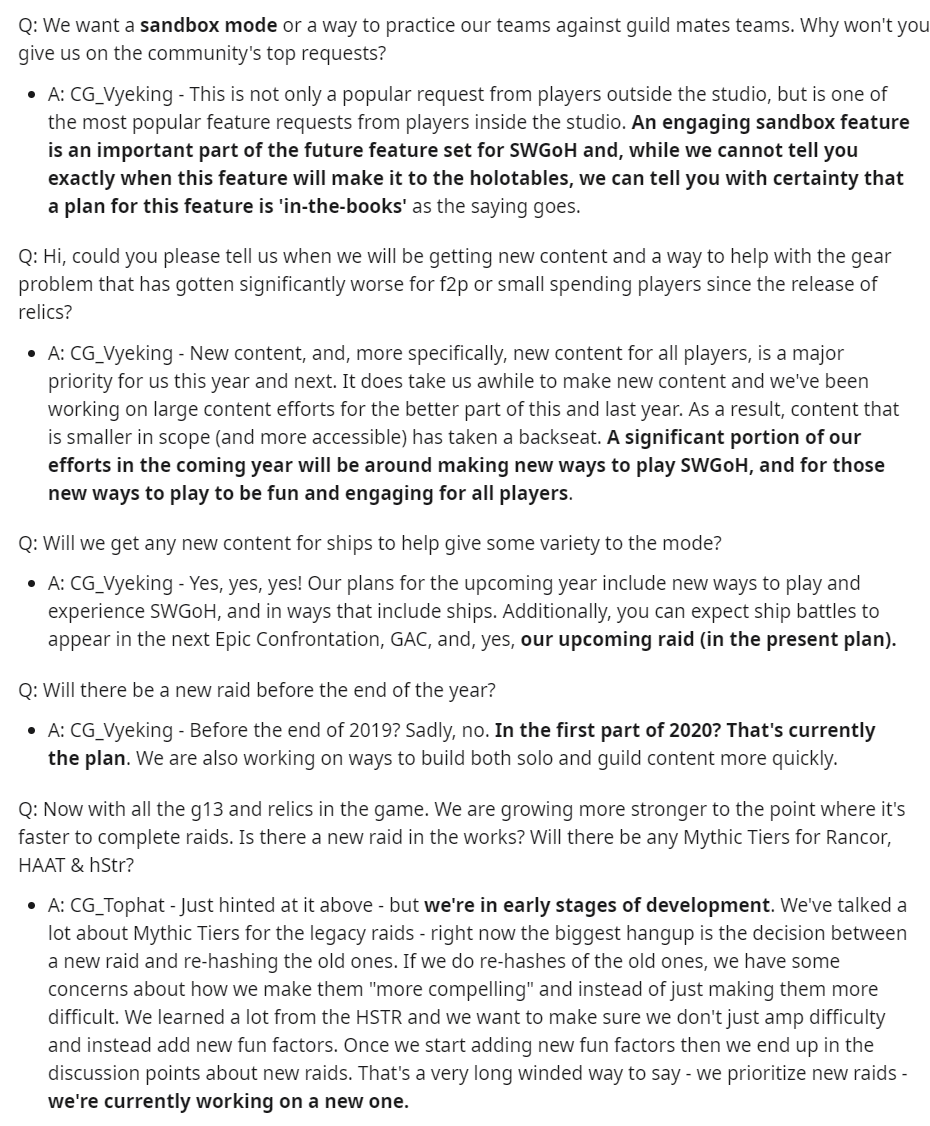 I mean, that was the plan back then, I can attest to that.

Thing is, its game development, plans change and its often for reasons we cant talk about. This happens all the time with console games that have 5 year dev cycles and you never hear about it, but with a live game its much more pronounced since you get to hear about most things every few months.

I think thats a fair point, and I am sure most reasonable players would be ok if things changed because the internal direction changed. The issue is that, in the entire year since that Q/A, the only content we've got was GC(Which I really enjoy). I understand that things take time, but for an entire year to pass with basically one added piece of content is a hard pill to swallow. On top of that, they haven't even hinted on anything that is to come or is being worked on. We all want the game to be better, but they can make it so damn hard.

The " most reasonable players would be ok " bit doesn't really exist, the players telling us to eat sh*t and die must feel like they're the ones being reasonable while CG is the one being unreasonable. Yes I'm being a bit hyperbolic but remember that whatever bit of feedback you see here on reddit is only a very small piece of the whole pie that the developer gets to look at and react to.

With live games its more often than not a bad idea to announce things too far in advance (older players will remember that bit in the cantina with the "coming soon" sign that was there for years. If you communicate too early it can put you in a bunch of problems because it sets expectations that grow outside of your control. We communicated early about GL's and people took it as bragging and overpromising, we spoke too soon about the potential raid and people think were lying and scheming when in reality we just weren't able to do the raid when it came time to make it, if we tell you everything were thinking and then have to cancel it due to x reason then we have no reliability with the fanbase ... so eventually its better to just keep your cards close to your chest and announce things when they're solid and ready to be presented, which is what has been happening lately, because then you can control the message with more confidence.

If I could hang and drink something with the most passionate people here, the key thing I would try to get you to understand its how ridiculously difficult it is to make a live game that has a famous license attached to it. Your head would spin with how much nonsense even the simplest thing has to go through before it goes live. I know people don't want to hear it because conspiracy theories are more interesting, or the narrative that same youtuber came up with for clicks engages you with the community ... and why is that? Because fans tend to want that validation, they want to believe there's something grandiose behind the game they spend so much time and energy on, much better than believing the truth, that videogame development is just annoyingly difficult, which makes for a boring YouTube title.

I have loved reading your thoughts on this. I know you guys go through a lot while putting this game together. And as a YouTuber who is very click-baity, I've always tried to keep things civil. I know that I've fallen short, for sure.

I know you're probably under an NDA and can't talk about much, but could you answer two hopefully vague questions?

Ya sure, NDA’s are a fun legal thing and all but Ive been in games for over 15 years and I love and respect the teams I worked with so Im not gonna be out there spilling company secrets ... which honestly tend to be weaponized and misunderstood by the community anyways so theres very little to gain by being a leaky faucet just to score internet points

To be honest I feel like the only reason they reply is because they are not a part of the team anymore and can say things without someone behind them being all "no".

Look at my dev Q&A's, I use the exact same tone and was just as thorough except I use more profanity on my personal account ;)

First of all, thanks for posting here. It is nice to see optimism and realism coming from someone who worked on the team previously.

As someone with knowledge of the upcoming big feature, I have a question for you. For months my alliance has been dwindling, people are burning out faster than we can replace them. Lately we have not gotten content that could really bring guilds together towards a common goal except for the TBs, and light side has been more frustrating than anything else.

I am concerned that the only things we've gotten this year have been focused on the player alone, and tend to not take up much time. The Jedi Luke event was fantastic, and the galactic challenges seem like they'll add a lot for individual players once fully implemented. Right now I know we're still in the "grand arena" phase of "grand arena championship", so I'm holding criticism until we get to that point.

That said, without giving away any real details, do you think the next feature is something that can potentially bring guilds together? I've been holding on to hope that something is coming, but with the lack of big features over the past year I'm becoming more skeptical over time.

Sorry bud, but it would be a huge breach of trust for me to hint at any upcoming content ... plus, at some point I wont even know what that content will even be.