My name is Juras Rodionovas, and I’m the Lead Character Artist on the Darktide team. Together with many talented colleagues, I’m working to bring the characters and horrors of Atoma Prime to life. I love everything gritty and creepy, and so working at Fatshark on a project like Darktide for the past two and half years has been nothing but a joy.

Today, I’m super excited to provide an insight into the character customization in Darktide and talk about how we’ve worked together to allow players to create their own characters of the 41st millennium in the Warhammer universe.

Entering the World of Fatshark and 41st Millennium

At the beginning of my journey at Fatshark, my only previous experience with the Warhammer universe was Warhammer 40 000 - Dawn of War 2. I have very fond memories of playing it when I was younger. I also started playing Warhammer: Vermintide 2 about a year before joining Fatshark. I vividly remember playing Vermintide 2 and being impressed by how fun and coherent the game felt. Those were the signs that the whole team was very passionate about the project and the quality of their work. And those were the values that led me to join Fatshark eventually.

A year after playing Vermintide 2, I was brought on Darktide by our Game Director, Anders De Geer. I felt immense passion immediately and understood the vision that the team was aiming for when it came to character art for the project. I felt very inspired to help achieve it. Together with my team, our Technical Director, Mikael Hansson, and Art Director, Mattias Rousk, we helped set the technical and artistic requirements with workflows that would allow us to achieve our goals during production.

I quickly realized that Character Art is essential when working with a Warhammer IP since there is so much raw artistic boldness in the miniatures’ designs and the visual descriptions within the lore of Warhammer 40,000. The whole character and concept art team wanted to make sure that visually, our work shows the grittiness of this world and that we portray our characters in a way that belongs to that universe and Darktide’s narrative.

In Darktide, you begin playing by creating your convict - a reject who, by doing missions, will gain trust and climb the tower of respect built within the ranks of Inquisition. Players decide the backstory of their convict and choose a look that matches it. We have decided to peel back on predetermined characters that players could choose in Vermintide 2 and try offering players more freedom and choices in shaping their avatar. 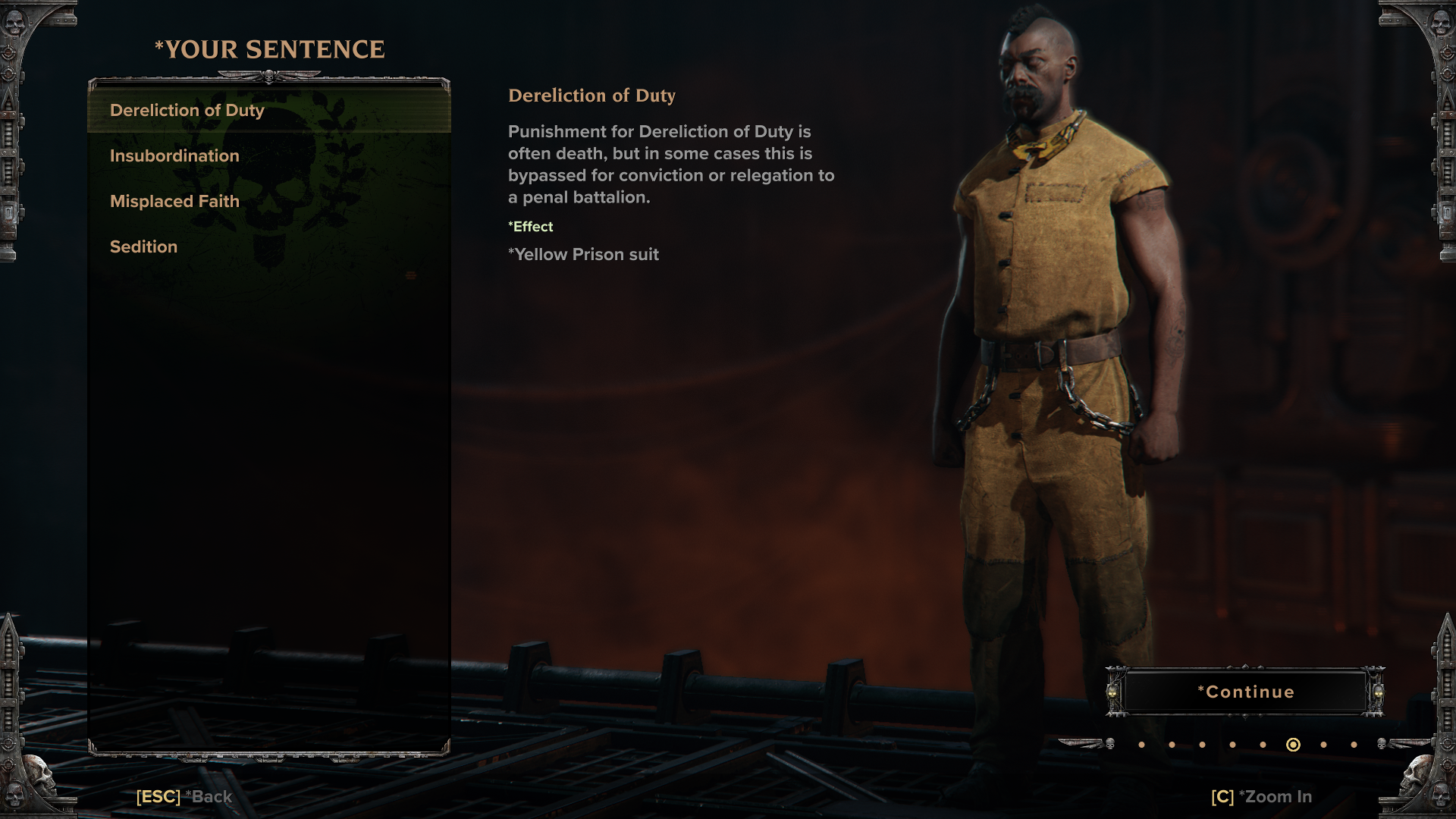 Our goal is to spark a personal attachment to one or several characters that players choose to create and play with. It’s a very daunting task! The Ubersreik 5 in Vermintide 2 had so much personality, both visually and narratively. It’s why fans have grown to love those particular characters. But the way we have tackled this enormous undertaking lies within two significant features in Darktide: The Character Creator and Cosmetic Customization.

This pair of features require a lot of effort to do right. So in the project, we’ve formed a feature team specifically dedicated to ensuring that we deliver the best character customization that we can here at Fatshark. This feature team consists of myself and other incredibly talented craftsmen and craftswomen - concept artists, character artists, weapons artists, and technical animators.

Our feature team’s job is to make sure that we can support these choices and provide players with visual options that can match the narrative and tone of the game. Since we’ve chosen not to have predetermined characters with personalities this time, the approach was to tackle customization options in a way that can make up for players in other means to allow them to shape characters that still have expressive personalities. For example, we provided a set of premade face options rather than letting players use sliders to shape them. This way, we could pack in a lot more personality and visual appeal in how the faces look.

Our most crucial visual intent with the customization options is to make sure that they feel like they are part of the world of the 41st millennium while also being connected to the narrative of Darktide. We want the player character faces to look rugged and worn from lack of sleep and food. We want scars to be a brutal reminder of their former life. We want tattoos “made with burned boot heel ink and locally collected gutter oil,” as my colleague and one of our talented character artists, Carin Backlund, would describe them. 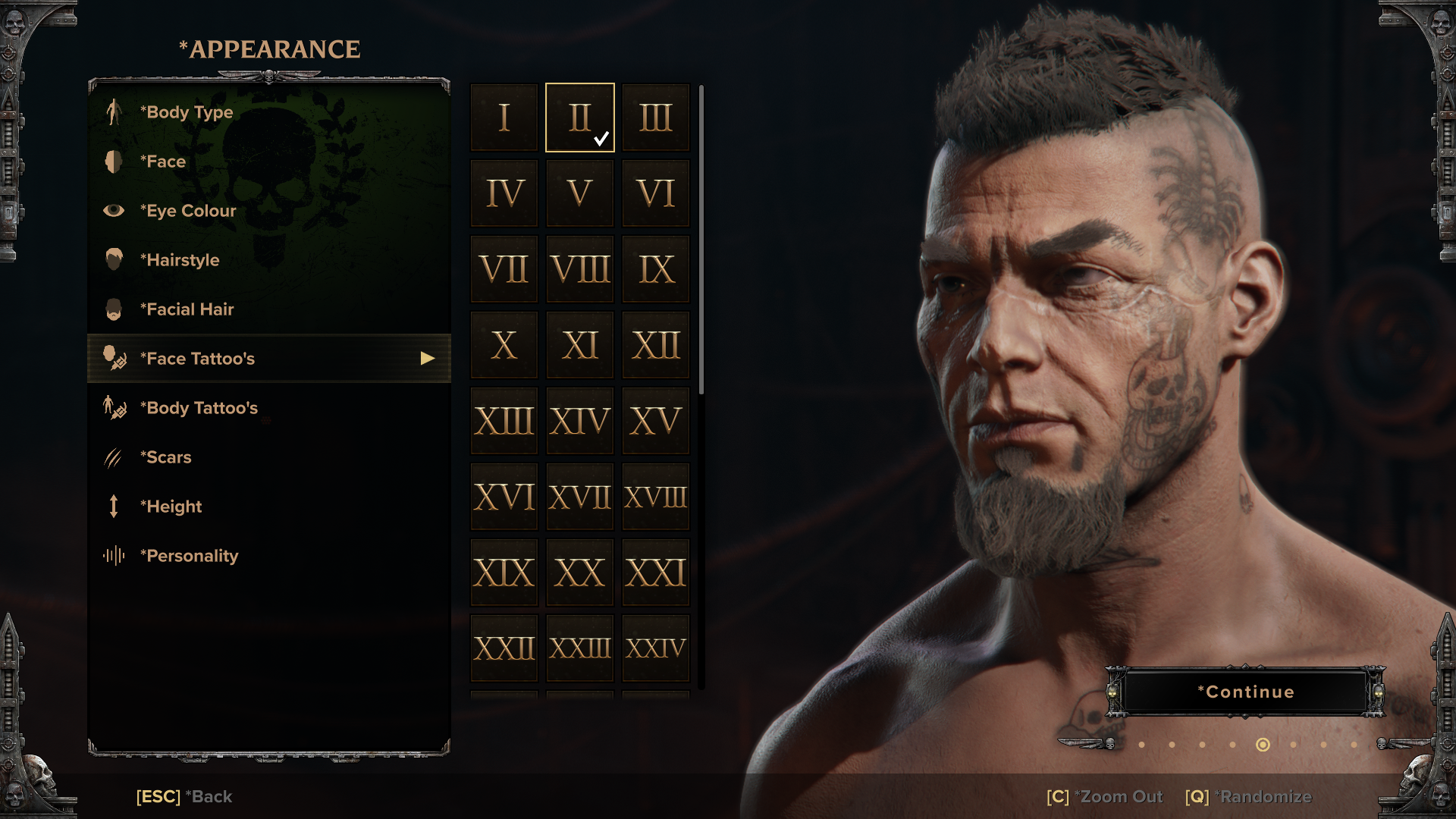 All this starts with the concept art team, which has done a fantastic job setting the initial tone and visual style. One of our concept artists, Miguel Iglesias, has provided us with amazing mood concepts that could easily be part of a Games Workshop illustration book. This has helped us immensely when coming up with suitable customization options for a Warhammer 40,000 video game.

A Drive for Craftmanship

One of the more significant values that the whole art team here at Fatshark has is belief in craftsmanship when it comes to our work. We apply this core value directly to what we do with character art and take pride in our handcrafted assets, such as faces.

Faces are an excellent example because the subject is very complex, and it takes a lot of skill to create a hyper-realistic face that doesn’t look uncanny. Today, many studios rely on photo scanning their character assets such as faces and clothing. There are areas where working smarter, not harder, is crucial, and the method of producing assets with scanning can be efficient. We believe that it takes out a lot of the artistic value, and often, the art becomes generic, soulless, and lacks personality.

And so, when we create assets like faces, we want to make sure that they resemble the style, tone, and grittiness of our mood concepts. We want players to see the work that an individual artist has put in when hand sculpting every form of each face. The art becomes more personal because a real person has crafted something with their own hands. I believe this unique and artistic touch is tough to achieve by relying on scanning real people with software that does the work for the artist.

Diversity in facial structure and ethnic descent has been part of our goals for providing face variations to the player. We want to offer a broad set of options, so players from different parts of the world and age groups can feel represented when creating their characters. Part of that representation is also imperfection, and it is something that we see as an important pillar when it comes to the character art in Darktide. For example, faces in real life are imperfect and more asymmetric than one might think, and we want to capture that in our set of faces. Crooked nose, grinded jaw, moles, veins, and skin conditions: These more minor details are important when making a face look like it has personality and soul. These imperfections ultimately contribute to our view of the ugly and gritty universe of Warhammer 40,000.

With this intent in mind, we want the players to be able to create many different looks with just one face. Do you want to be a prison scum who got a blind eye when the guard hit you with the butt of his lasgun? Or do you want to be a battle-worn Imperial Soldier who was falsely accused by his officer and thrown into the Penal Legion? There should be enough options to allow players to create their own version of a gritty character.

GEARING UP WITH THE INQUISITION

Once the players start working with The Inquisition, they will be able to customize their character with cosmetic gear. Cosmetics in Darktide don’t affect gameplay and are purely for decorative purposes, allowing players to connect more with their characters and show off in the Mourningstar ship in front of the others.

Ramping Up The Gear Factory

At the start of the project, we knew that we needed to build a solid pipeline that would allow us to create significant variations of cosmetics and support the visual level of detail and quality that we were aiming for. Eventually, we ended up with tech and workflows that we were pleased with, allowing us to create a vast amount of cosmetics inspired by various themes within Warhammer 40,000.

The main element that we can set visually is color and patterns. It allows us to create many visual styles based on iconic planets, regiments, and other themes within the world of Warhammer 40,000. 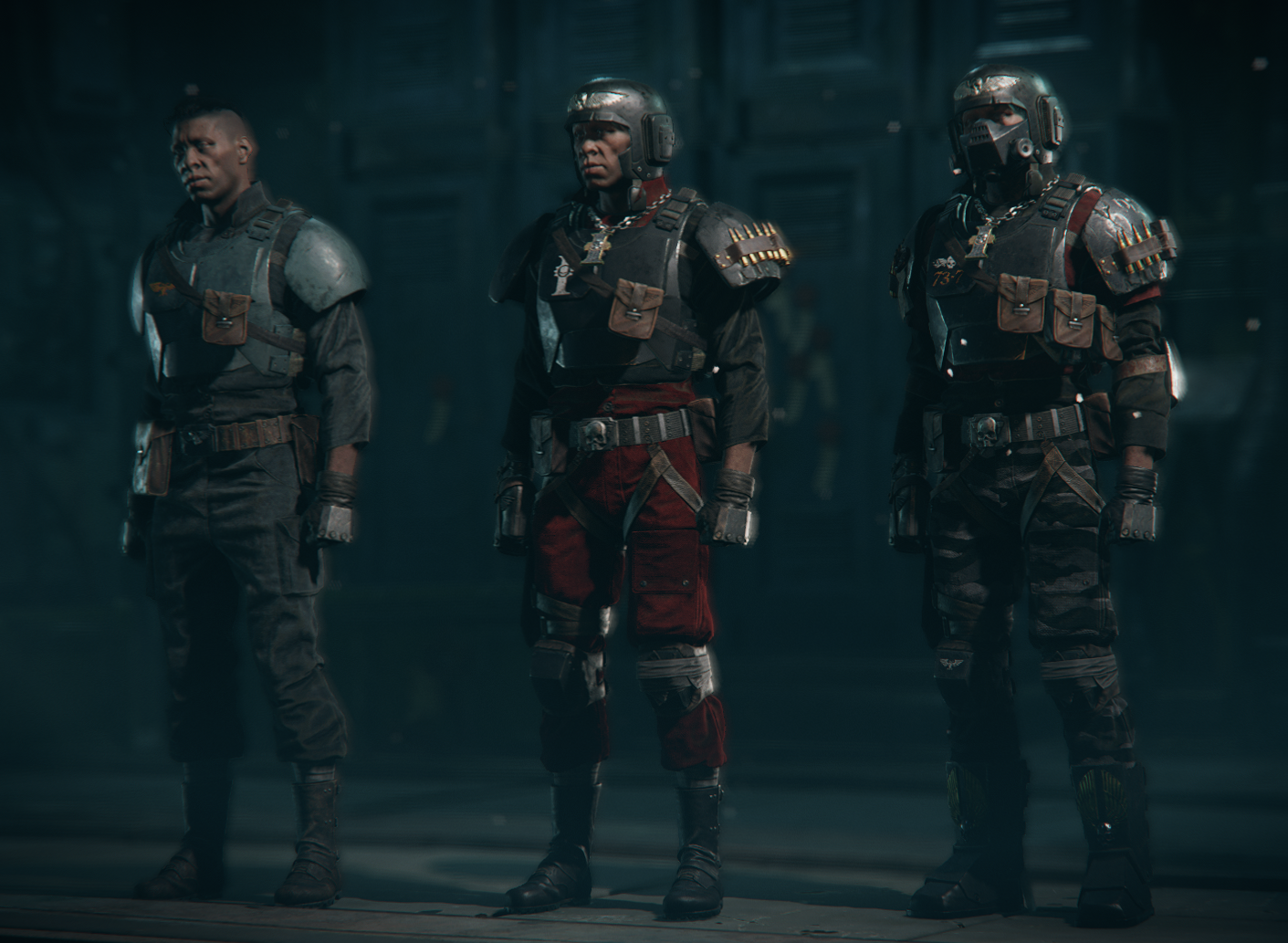 On top of color and patterns, we can also choose between various tileable fabrics or metals, which extend our toolbelt to a greater level. We can, for example, take a pair of pants and make them look either very rugged, clean, or feel completely different by applying a leather material. 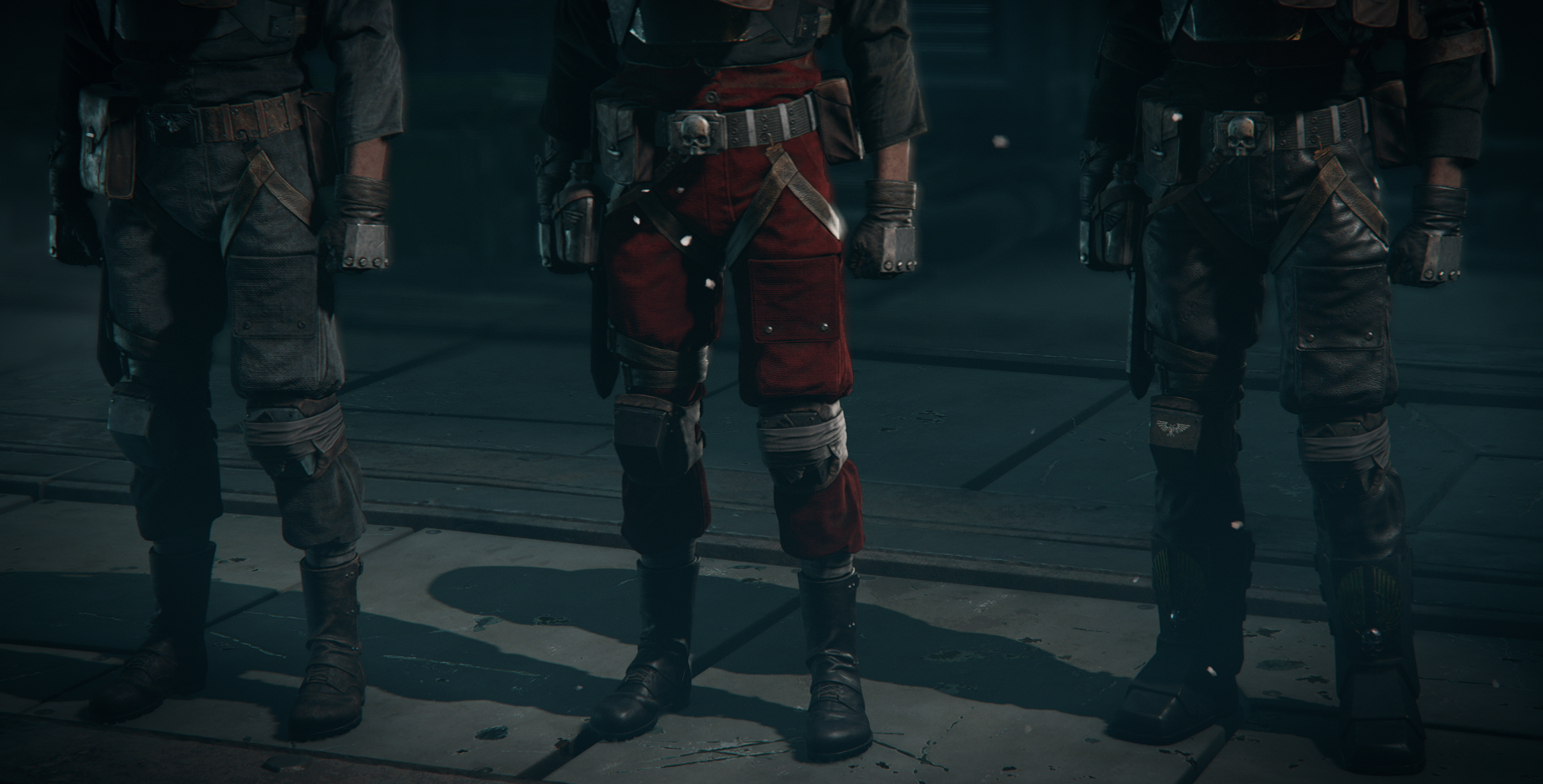 As a last touch, we can apply a set of custom decals on the gear, which helps tie everything together and add that final touch of detail that sells the outfit’s theme.

In Vermintide 2, we allowed players to choose between full-body skins and hats. In Darktide, however, we have decided to go for more extensive customization options. Players can pick and mix between the following apparel slots:

A big part of the Warhammer 40,000 miniature community has always been creating cool kitbash miniatures, which has inspired us to extend our customization to this level. We believe that our cosmetic options will encourage players to combine different cosmetic items across the slots to create some stylish outfits to share with us and the community! 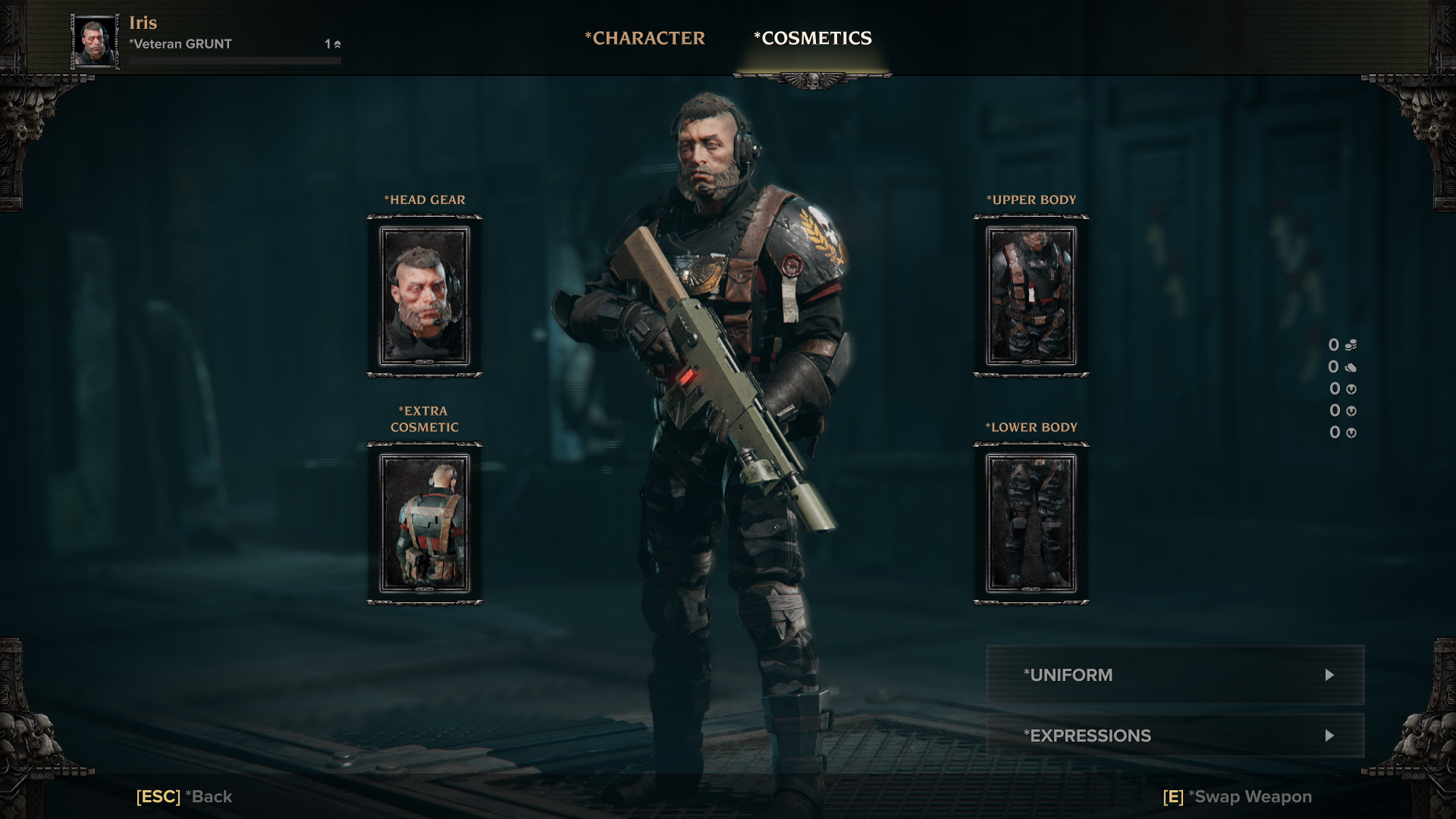 I hope you enjoyed reading this peek into our character customization in Darktide and that you have found it interesting! We’re very excited to see players create their characters and configure different outfit combinations with their friends to establish their own fireteams.