Please use this thread to post feedback on the Death Knight class, once you’ve tested it in the Dragonflight Alpha.

We’d like to kick things off here with a talk about some future plans for both the Core and Unholy Death Knight trees. While all specs can expect iteration as we navigate through alpha and beyond, this update will focus on the two trees mentioned.

In next week’s Alpha, you can expect to see an updated layout to the Core tree. In its current iteration, the tree feels a little too linear, with lower variance in customization as you progressed down one of the branches of the trees. To alleviate this, we’ve added connecting nodes to Blood’s branch from both the Frost and the Unholy sides of the core tree before the 1st gate, and one after the second gate. We’re also adding more nodes above the first gate, to add some more flexibility when picking up utility options.

We’re also doing some talent re-arrangements to fix dependency issues (preventing players from picking up talents with 0 value based on their prior picks). Here’s a work-in-progress picture that might give a better idea of what that means. 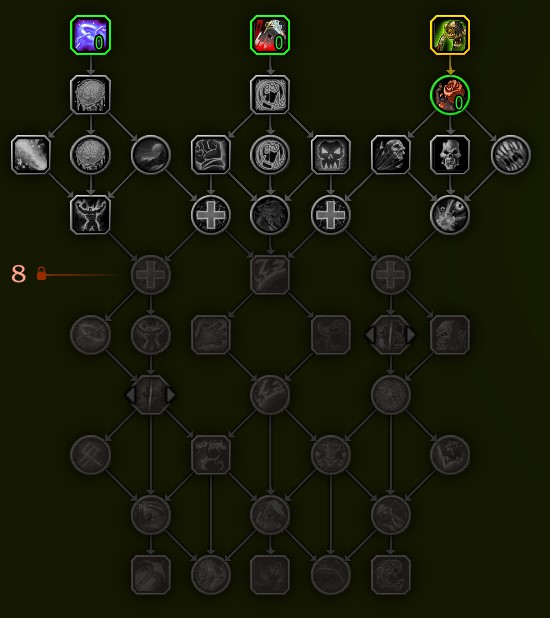 In the core tree, we’re going to move forward with some known bugs. While most things that aren’t actually working should be marked as NYI (Not Yet Implemented), we missed one with Empower Rune Weapon adding charges (for Frost). It’s currently not giving a charge if you learn it in both the Core and Frost tree. This will be fixed in a future alpha build.

Rune Strike is intended to only be available prior to choosing a spec. Each of the specs first talent choices should replace Rune Strike. This will be fixed in a future build.

As we move into future builds, we want to tackle two main issues we’ve heard about from the community. The first is the issue of cooldown desyncs which is caused by a few different talents and some oddly timed base cooldowns. This will be our first priority. Secondly, after these changes make it to the alpha, we will want to tackle the overall structure of Unholy’s talent layout. The tree layout changing will take some time but we want to give an early heads up that we are actively looking at it and you can expect changes in the future.

Our initial goals with this include:

Some changes to expect in a future alpha build:

Thank you all for the ongoing feedback! It’s greatly appreciated, and we look forward to more as we iterate throughout the testing period.

about 2 months ago - Kaivax - Direct link

We’ve got an info drop for you. Here’s what we’ve been working on, and what you can expect to see in the next Alpha build for both the Class and Unholy trees.

In an effort to further increase choice, we’ve updated some talent positions, added two additional connections from Might of Thassarian and Merciless Strikes toward the center section of the class tree, reduced 3 rank talents to 2, and updated the lead-in talent to Abomination Limb with a throughput talent.

The following changes are not everything you’re going to see in the next build. Rather, these are highlights of the bigger changes (and a few more-subtle position changes with existing talent nodes).

Here is a look at the updated tree with the new structure: 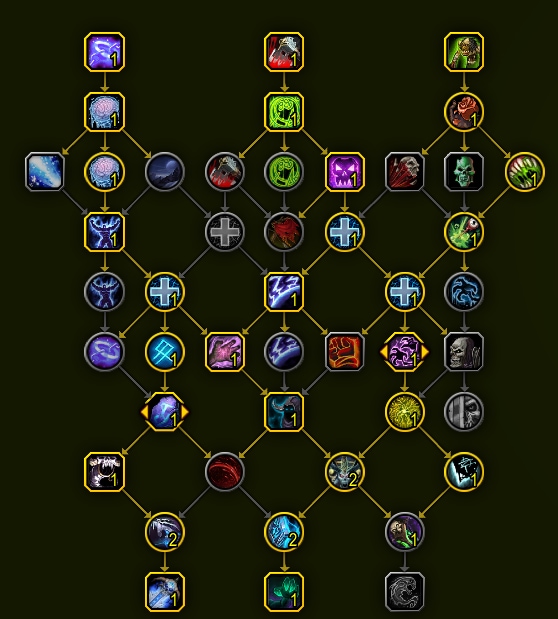 As we mentioned previously, we have updates to both the baseline and talent tree for Unholy. These will be available in the next Alpha update. The baseline changes focus on helping reduce the cooldown desync as well as baking in existing talents to help the flow and feel of the spec. Additionally, the Unholy tree itself experienced substantial iteration and has been mostly redesigned and restructured with 11 new talents.

Below is a list of changes previously mentioned, as well as new talents. The below list does not document each individual restructuring of existing talents, as that’s quite substantial, but we do have a screenshot of the tree below to help contextualize what can be expected.

Army of the Damned

New Talent – Ruptured Viscera: When your ghouls expire, they explode in viscera dealing Shadow damage to nearby enemies.

New Talent – Commander of the Dead: Dark Transformation also empowers your Gargoyle and Army of the Dead for 30 seconds, increasing their damage by 40%.

New Talent – Coil of Devastation: Death Coil causes the target to take an additional 35% of the direct damage dealt over 4 sec.

New Talent – Rotten Touch: Sudden Doom causes your next Death Coil to also increase your Scourge Strike damage against the target by 30% for 6 sec.

The new and updated Unholy tree looks like this: 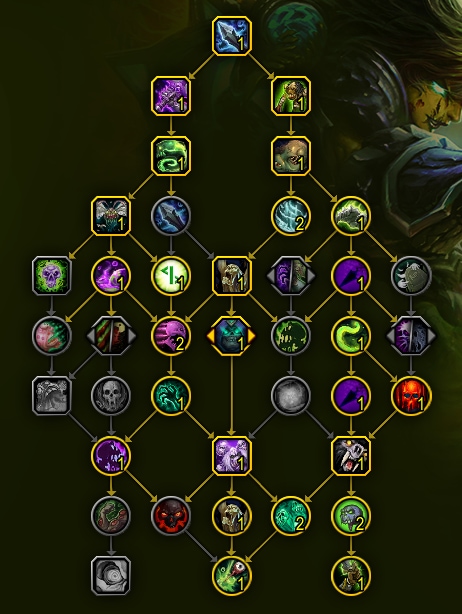 Thank you very much for all of your discussion and feedback.

We look forward to hearing more from you about the updated trees.

In the next alpha build the Death Knight core tree is being updated to better increase talent choice. In order to do this, we’ve made several abilities baseline and cut talents that were proving to be problematic for the overall health of the resource economy for the specs. The left side of the class tree had 4 talents all dedicated to resources, which felt a little excessive. This has been reduced 2 (specifics noted below). In addition to the resource talents being shifted around, we’ve also made Death’s Advance and Lichborne baseline.*

New Talent – Insidious Chill: Your auto-attacks reduce the target’s auto-attack speed by 5% for 30 seconds, stacking up to 4 times.

New Talent – Gloom Ward: Absorbs are 15% more effective on you.

In the next alpha build, Blood tree has undergone significant changes including updates to pathing, new connections, 6 new talents, updated existing talents, and 3 max rank talents have been reduced to 2 max ranks. Due to the sheer amount of changes to the talent tree we will just highlight some of the bigger changes to the tree below.

New Talent - Blood Feast: Anti-Magic Shell heals you for 100% of the damage it absorbs.

New Talent – Sanguine Ground: You deal 5% more damage and receive 5% more healing while standing in your Death and Decay.

New Talent – Coagulopathy: Enemies affected by Blood Plague take 5% increased damage from you and Death Strike increases the damage of your Blood Plague by 25% for 8 seconds, stacking up to 5 times. 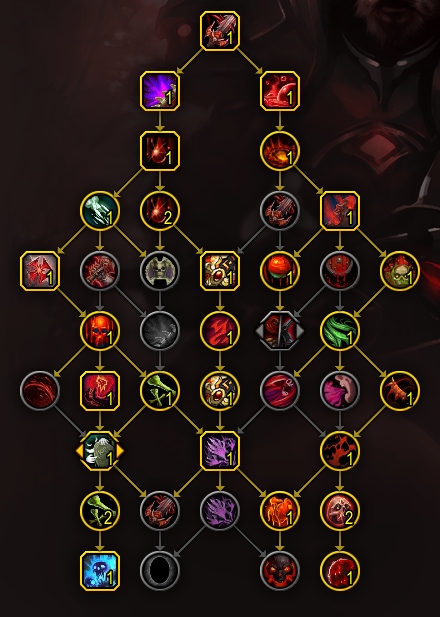 In addition to Unholy’s latest changes we have a few updates we’d like to make to their talents that affect resource generation. The changes to the class tree should be a step in the right direction for better balancing Unholy’s resource economy, but we also want to target a few Unholy specific talents as well. Unholy has been a class with a higher downtime and while we think some downtime can be okay, it’s important to find a balance between too high and too low. The current alpha version swung that pendulum too far in one direction and we are looking to find a better middle ground that both feels fun and rewarding to play. Resource tuning will continue to be on going as we head into Dragonflight. As mentioned last week we are making efforts to prepare for tuning in Dragonflight as such Unholy will be receiving a few tuning tweaks to their talents.

Commander of the Dead

We want to share some of the upcoming changes we have planned for the Frost spec tree in the next Beta build. While we were generally happy with the Frost tree and what it had to offer, we also recognize that there were some improvements that could be made based on our learnings over Dragonflight’s Alpha development.

The existing Frost tree suffered a bit from a lack of choice once a player locked into a specific build (often choosing between Obliteration or BoS, then making 1 or 2 choices with what talent points remained). To help alleviate this issue, the upcoming tree has received new talents, reworked talents, existing talents moved to more accessible spaces, updated pathing connections, and lastly several selection node talents have been decoupled and moved elsewhere within the tree (most notably Icecap). 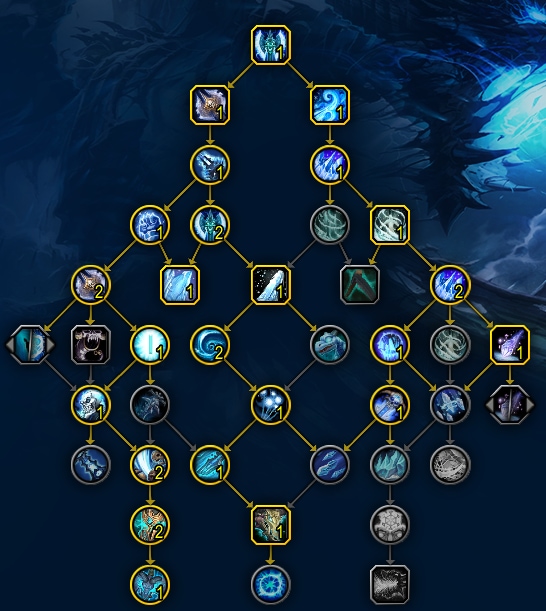 Below, you can find the new and updated talents. This doesn’t cover all of the positional and pathing changes for talents, but it does highlight some of the more notable ones.