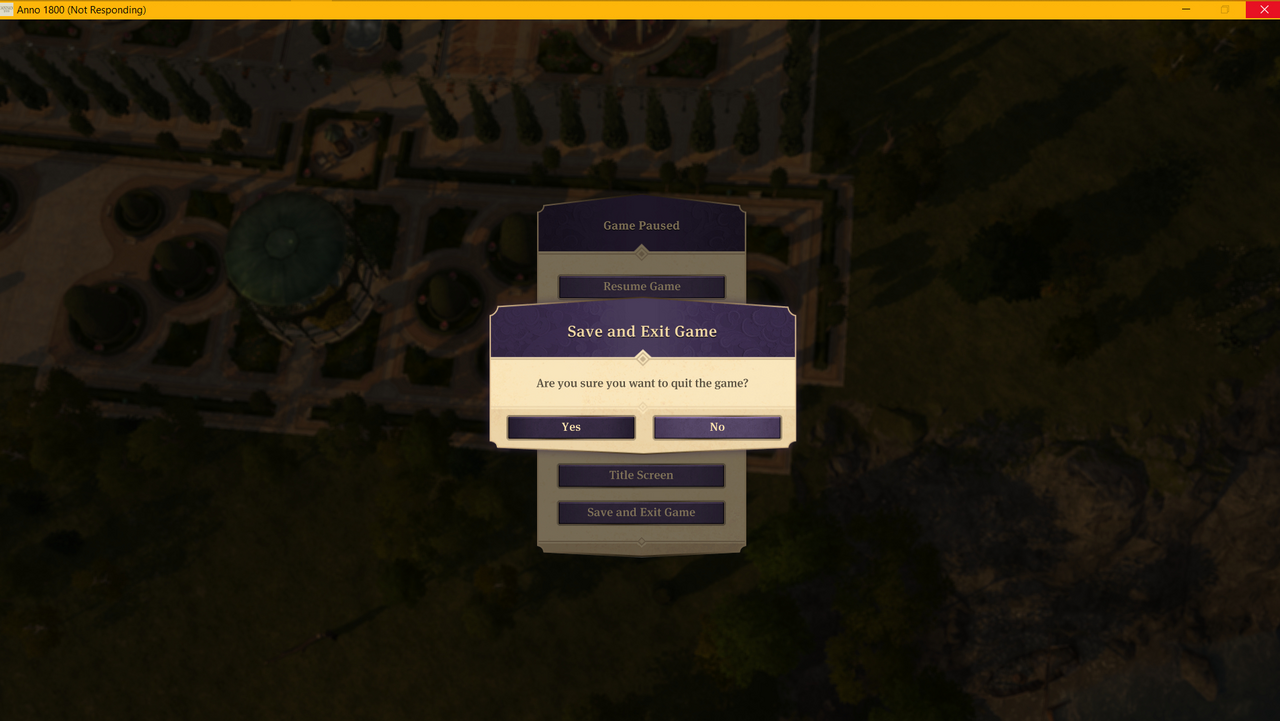 this has now become my most Anno-ying problem. the 'game saved' notification freezes my game a minute before the notification pops up, i have to have save intervals every 10 minutes because of the amount of crashes that can happen at any moment or with any uncareful mouse click at the same time as a notification popup. this 'save game and exit' now completly freezes up my PC and only the task manager will fix it, which means, if i miss time a 'save and exit' i could loose the last 9 minutes of gameplay...so bloody Anno-ying!
another issue i am having is things like share take over, World Fair exhibitions, anything which has a timer (except resident/NPR quests weirdly) take twice as long to complete...island shares take over 22 minutes, and that's on x3 speed...why? surely i am not the only one lol

please don't respond telling me to try this and that or if i use mods, they're the problem, i appreciate that help, but it is now really old advice for me, as i have been having more or less the same issues with Anno, since i hit engineers over 18 months ago...i know mods are not the problem because it happens in an unmoodded game also.
i have become quite skilled with dealing with constant game freezes, adapted my usual PC use and habits to accommodate the Anno-ying dragging and crashes. every single game notification freezes my PC, changing regions, opening events, i would really like to disable all of the notifications because they are no use to my game anymore, i think we should at least have that choice and as it is a known bug, it would certainly help a lot of people if there were a choice. i am aware that a fix has been added to disable some notifications, but not the most Anno-ing notifications.
currently i am verifying files for the 4th time since the update, clearing cache doing the usual maintenance and things i have been told to do previously...this is not fixing anything.
i guess i can't really complain much because i have had a couple of months relatively 'stress free' playing Anno, thinking these issues are now being somewhat fixed...instead, since this last update, my game is getting worse, a lot worse. i wouldn't mind so much if i had a million residents, but i have kept my game quite small on purpose, because max building does not work for me...or my PC!
i understand completely that my PC is old and total crap (being a HP 700 series) and it may also play a part in the issues i have with Anno...but quite honestly...this game is a city builder, fair enough, once of the biggest city builders out there, but...i should be able to play it on a reasonable PC (and this is my second attempt at a different PC) i feel like i am being priced out of this game if i am being pushed into getting another PC which i know for sure will cope with Annos constant file writing, CPU usage, hungry for RAM and demanding graphics.

the next step would be a new PC, but as i read many posts from players who have much better PCs than mine, and they're having the same issues, really...could it be down to my PC entirely? i think not...as much as i love this game and think the devs (and modders

) have put their heart and soul into developing such a beautiful world, i feel a bit crappy for complaining like this, but i will persist with playing it and i will carry on doing all the stuff needed in an attempt to keep playing it...for sure Anno devs, you have a loyal fan base who will take this abuse and keep coming back lol

the reason i asked not to bother responding with advice what to do is because i am so passed that now, i feel the need for a vent because my game froze...AGAIN...my tea tastes like crap and its raining. but hey, if anyone has a fix which i haven't yet tried, bear in mind i've tried everything which has been noted here and reddit without much success...feel free to share the wisdom because i am all out of it

but i get so freeking Anno-yed that a hell of a lot of people are having the same problems since the game was released, and still, more and more posts appear here complain about the same issues...is it ever going to be fixed? at least think about giving us the choice to disable all notifications...pwetty pweese...or do i need to come round your house and stomp on your toys?

10 days ago - Ubi-Thrupney - Direct link
Hey P0PPYTAT, thanks for posting about this.

Our devs are currently tracking an issue with these freezes, and I'd like to add your experiences to our data to help us investigate this.

I do need to ask you to go through our troubleshooting guide, being sure that you've updated your drivers and OS, and that you don't have any background programs running that might be conflicting with the game.

If that doesn't help (I appreciate it probably won't, since this is being experienced by a few folks), we'd like to request some system files. See these links for how to create an MsInfo.txt file and a DxDiag.txt file. Once you've got those, please contact us via our social media channels at Facebook or Twitter, so we can get them from you to help with our investigation.