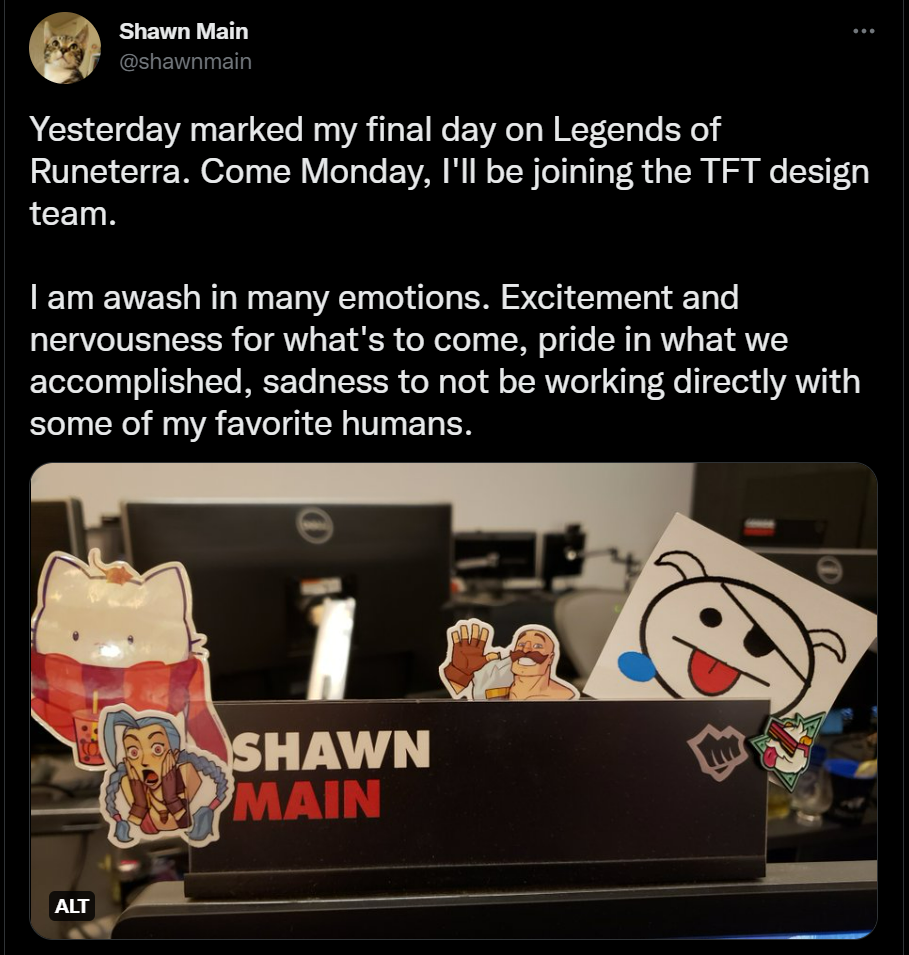 Are there any devs left working on LoR at this point?

So basically there are no devs working on LoR rn.

Just to be clear, this is all part of the previously announced team transfer. People have just been settling into new roles at different rates and announcing accordingly. Shawn's been doing incredible work on Path of Champs over the last year and I plan to drag him to playtests and otherwise bother him as often as possible. :)

Are they any good?

Don't lie to us Dan, we know you're currently posting while getting your transfer to Valorant. I know you have a passion for gun buddies, admit it!

Lol, I'm actually one of the design managers here now. I'm working on a bit of everything design related, from cards to feature strategy and more. :)

Oo awesome. Good luck with it man, excited to see what you will bring (TF and nab synergy with Graves please)

Chances are its just some internal shuffling going around, allowing different people to flex different muscles and keep the creative juices flowing. I wouldn't be surprised if a few devs from tft or other projects moved to LoR, they just aren't vocal about it. (Like, Mortdog is the only TFT dev that I know of)

Bit of both. We did announce that some devs are being shifted off LoR to work on other high priority projects at Riot. For those shifting, it's mostly the people that have been on LoR for many years and are ready to do some other stuff, or folks specifically working on Path. There are exceptions of course, but that's a reason so many names you may recognize from LoR are announcing team shifts.

At this rate of "doom posts" it would probs be better to pin a thread explaining this situation in this subreddit and /PoC.

Heh, probably. That'd be up to the mods.

Hey, I know a lot of doomsayers have been posting here about the devs that were announced earlier to be moving onto other projects from PoC.

4 and 5... awkwardly I can't talk about yet. During the past few months we've been hard at work on Path updates that won't be rolling out until later this year. I can't spoil them, but I can say I think they're love letters to fans of the mode.

Seems pretty promising that there are some more updates coming for PoC at least that are most likely the updates they managed to finish before moving out.

Here's hoping that what he says is true and people enjoy those updates.

On top of that, I really hope that they enjoy their new positions on TFT, LoL, Project L, or the new MMO (if any of them have been sent in that direction) Because at the end of the day these guys do some amazing work, I can't wait to see what they do next.

Here's hoping we can get some Riot dev updates on maybe who is on the team, I never really followed who was on the team initially but I knew them from the videos they would announce upcoming features. Like Alexz Lee, Andrew Yip, RubinZoo(Streams on twitch every now and then), etc. I do feel like if some type of announcement showing that the team is still strong on LoR would silence some naysayers. (I also am keeping the positive hope from what I see that the game is not anywhere near dead because I love this game.)

The last video introduced (and I believe a twitter post about the new game Director) Dave Guskin, and Brett Freeman (Director of Strategy?), and a dev on the team that has been active on reddit lately Dan Felder.

(Randomly saw on twitter IamWalrus, and Riot Durdle? are just two that I know of on top of the couple I listed above.)

Are there any devs left working on LoR at this point?

everyone is moving out man, its scary. how safe would you safe the game is from being shut down by Riot?

Not everyone is moving out by any means. The LoR team was huge and there’s still a bunch of folks left. I wouldn’t be staying if I thought the game was close to getting shut down. :)

Hello, i did not expect you here. Thank you for your presence

So you actually aren't working on Runeterra...it just falls loosely under your umbrella, along with stuff that's NOT being cancelled.

Are you allowed to offer any insight into the future of LoR?

I can’t reveal unannounced stuff on Reddit comments though.

My apologies, I misunderstood your post. Thanks for clarifying.