Today we have released the full patch notes for Overlord and the 3.4 “Cepheus” update. You can read them here[forum.paradoxplaza.com], also happening today on the Official Stellaris Discord[discord.gg], you can join us for a Developer Q&A, starting at 1700 CEST. Ever wanted to ask a Stellaris Dev a question? Now's your chance!

We thought it would be a good idea to catch up with those members of our community who haven’t been closely following our dev diaries.

Today we’ll talk about some of the free features coming in the 3.4 “Cepheus” patch, releasing alongside Overlord on May 12th. This is not a complete list of features, and some features may still be subject to balancing or other changes.

Situations
The biggest change you’ll notice from the 3.3 “Libra” update is the new Situations system. This is a new feature that has been in development for a while, and it’s great to finally get to show it to our community.

Situations will progress in stages, and in some cases, each stage will have different or escalating effects. Some Situation progressions are linear, while others will progress depending on the choices you make in events and in your Approach to the current situation.

Current Active Effects by the Situation and the predicted outcome effects are shown along the right side of the Situations window. 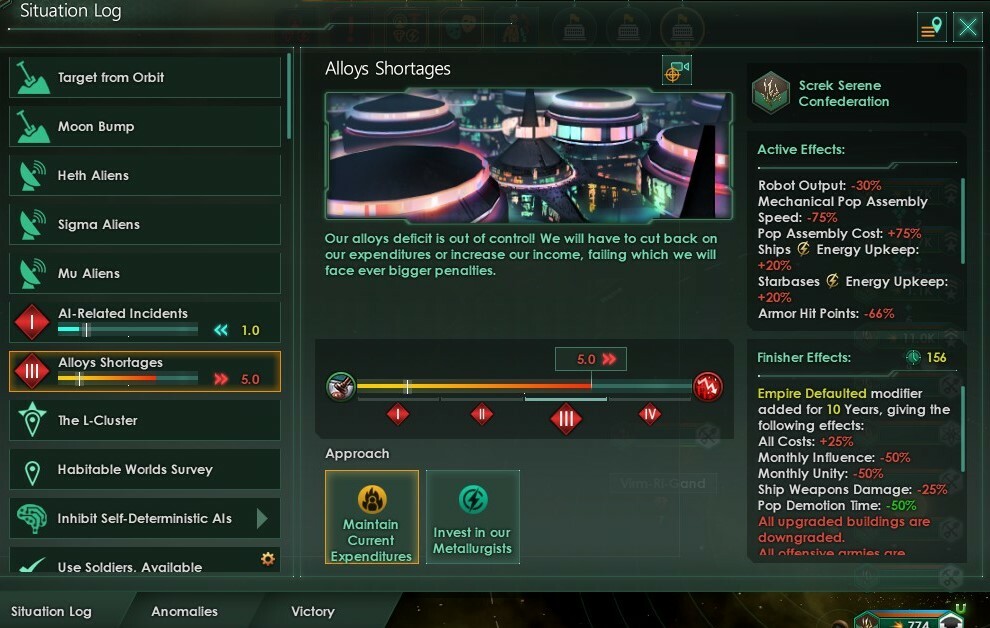 The primary use for Situations at the moment is in Resource Deficits, Planetary Uprisings and Machine Uprisings (requires Synthetic Dawn Story Pack). We have also converted several story events to use the new Situations system. Situations are a versatile platform, that we will likely continue to expand on in the future. Situations are also very modder-friendly, and we can’t wait to see what our modding community comes up with!

There are also some new story events that you may have never encountered before, and the Shroudwalker enclave (requires Overlord) uses Situations after you reach into the Shroud.

Deficits
Previously, when running out of a resource stockpile and having a negative monthly income, you would be hit with massive penalties to your planetary production. This had several negative effects, from initiating a resource spiral, where one deficit would trigger another deficit, and so on until your empire had major issues with just about every resource. The other issue was one of consistency; the old system was not flexible enough to keep up with some of the new Civics (Catalytic Processing is a prime example of this) and combinations thereof, which would result in empires (under some conditions) making resources out of nothing.

Once the Situation reaches the end of the last stage, it will result in a Default. Defaulting removes upgrades to buildings and applies modifiers to your empire to make combat less effective and constructions cost more. On the flip side, downgrading your buildings will result in a lump sum payment of the resource(s) you previously had a deficit in, giving you the opportunity to recover your economy and potentially play on.

Subjugation Changes
In the free 3.4 “Cepheus” patch accompanying Overlord, there have been significant changes to not only subjects in the Overlord DLC, but in the base game as well.

For starters, every subject now has a Vassalisation Contract, which can be customized to individual Subject empires. For example, you can choose whether the empire can be Integrated (now disabled by default in most cases), whether they have Diplomatic Freedom, whether they can expand, the level of subsidy they receive or tribute they pay, as well as whether they join in their Overlord’s wars, or whether the Overlord joins their wars.

This is all balanced by Loyalty, which is the measure of how Loyal a Subject feels to their Overlord. More Loyal subjects will be more inclined to agree with less favorable terms than less Loyal subjects. Subjects with low Loyalty may also break away via an Allegiance War if given the opportunity.

Overlord Holdings
Holdings are a new type of building that can be constructed on Subject’s planets. There are currently 27 holdings in total, with 6 Holdings being included in the base game. Holdings can be built on a subject’s planets in addition to Branch Offices, and similar to Branch Offices will provide resources to the Subject, Overlord, or both. Unlike Branch Offices, however, Holdings can also have a positive or negative effect on a Subject’s Loyalty to their Overlord.

Subjugation Improvements
In addition to these new features, Overlords who release subjects will now get 100 Intel on their subjects, which will slowly degrade over time to their normal base level. Sectors released as subjects will also now take the Origin of their Overlord, where appropriate. AI Subjects of Player Empires now receive AI bonuses as if the difficulty level of the game were one level lower, rather than losing their bonuses entirely. It is also now possible to build Gateways and Hyper Relays (requires Overlord) in your subject’s space!

Military AI Improvements
AI empires will be less inclined to split their fleets into hundreds of tiny fleets, in the 3.4 “Cepheus” patch, the AI will attempt to use a full fleet as their smallest unit to carry out military objectives. During peacetime, the AI will actively attempt to merge all fleets, and during wars will try to merge two nearby fleets when possible.

We’ve also reduced the likelihood of AI fleets getting stuck in a loop and going back and forth from system to system while attempting to group up their fleets.

The “Take Point” functionality has had some more attention as well, reducing the chances that AI will suddenly stop following player and AI fleets, and they will now try even harder to have all their fleets follow the “Take Point” fleet.

There has also been a new notification added at the point where the 3.3 “Libra” military AI would’ve declared war. This new notification will trigger provided you have enough Intel on the target empire, and while the notification is active the AI will begin gathering their available fleets and moving towards the border. Depending on your level of Intel, you will also get an estimation of when the AI is planning to strike.

The AI will now also better handle conflicts with Crisis-type empires. We’ve added a new war state to the AI, which is activated when the AI or its allies fight a mid or end-game crisis. This means that AI empires will obey players’ “Take Point” commands during crises, as well as help out their other allies if they’re attacked, and will be better at seeking out and destroying systems controlled by crises.

Sector & Planetary Automation Improvements
In 3.4, we’ve also done another pass on Sector and Planetary automation. The design philosophy for the new automation system is that “most players will be able to use some parts of it”. So the intention is not that all players will always use this and that it will be able to satisfy all players, we hope everyone will find something that they feel is worth using.

The planet automation will have an additional settings UI where players can toggle components on/off for each planet individually as well as setting default values for newly colonized planets.

The most impactful setting is Designation, which will cause the planet to only build structures associated with its planetary designation. For example, a Mining World designation will only construct Mining Districts and the Mineral Purification plant, and nothing else.

We’ve also added an option to set a Unity Focus for a Sector since Unity is far more valuable since 3.3.

Auto Resettlement Improvements
For the 3.4 “Cepheus” update, we’ve also addressed some concerns and Quality of Life issues with Auto Resettlement. "Ideal" worlds such as ring worlds, Gaia worlds, Hive worlds and Machine worlds now have a higher score when pops are deciding where to automatically resettle. Capital world planet designations also have a smaller increased score, and freshly founded colonies have 25% from their designation.

Pops will now pick which planet to auto-migrate to based on which planet has the most free jobs, rather than the least. They also now take free housing into account better.

The Outliner will now differentiate between unemployed pops that are migrating and those that are not. A yellow briefcase will be shown for planets that have unemployed pops that are in the process of migrating to another planet. A red briefcase will be shown if your attention is required to resolve the unemployment. On the planet view, the tooltips will now show where the pops are most likely to move to or explain why they are unable to move.

MegaCorp Improvements (requires MegaCorp)
One thing that was pretty immersion-breaking when playing a MegaCorp was the Impose Ideology war. Why a MegaCorp would willingly create competition was always a little confusing.

In 3.4 “Cepheus”, successful Impose Ideology wars launched by empires with the Corporate authority will result in the target (or created) empire having the Oligarchic authority and the Merchant Guilds civic. This is also true for Status Quo resolutions of Establish Hegemony, Subjugation, and the Scion’s Bring into the Fold wargoals with Corporate Aggressors.

Additionally, Corporate subjects can now open branch offices in subjects of their shared overlord, as long as their overlord is not also a MegaCorp.

In 3.4, we’ve also expanded our in-game localisations to include Korean and Japanese. We hope that this results in a more immersive and consistent experience for those communities. Issues, grammatical errors, and literally unplayable typos found in these localizations can be reported here!

New Free Celebratory Emblems, Colors, and Icons!
We are introducing a series of new emblems that will allow you to customize your Empires even further - 72 new icons, 45 new backgrounds, and 50 more colors.. Including.. Wait for it.. WHITE!

Additionally, we have added new human animations, hairstyles, beards, and eye colors allowing you to further customize your Human leaders!

Whew! That was a lot of stuff to get through. You can read the full changelog here [forum.paradoxplaza.com](in English only, sorry). Just a reminder that this is not a full list of changes, and some features may undergo balance changes between now and release.

Realize your Grand Design with Stellaris: Overlord and the free 3.4 “Cepheus” and 6th Anniversary update on May 12th!