Earlier this week we announced that the First Contact Story Pack is arriving later this quarter, alongside the 3.7 “Canis Minor” update.

Today we’ll combine a quick summary of some of the features and go into why we wanted to do this Story Pack.

Comment
18 Jan 11:45     MrFreake_PDX on Steam Forums - Thread - Direct
You can try uninstalling Paradox Launcher V2, and then starting the game via Steam, which will redownload the launcher.

In the launcher itself, in Settings, Video, set your Video settings to borderless fullscreen or windowed, this sometimes also fixes this issue.

If neither of these things work, go to support.paradoxplaza.com and open a ticket. Customer Support will be glad to help you out with this!

Comment
17 Jan 17:16     MrFreake_PDX on Steam Forums - Thread - Direct
If your issue persists after the master fixes thread, you can go to support.paradoxplaza.com and open a ticket, and Customer Support will likely be able to help you out with this!

«»» ««« «» ««« « « »«» »»« »»» « « »»»» » «« Warmest greetings from Minamar Specialized Industries! ​
We delight in meeting new peoples and welcoming them into the greater galactic community. With over 143 successful uplifts to date, we’re the acknowledged leaders in the field of social and technological ascendancy. We’re thrilled to finally make your acquaintance, and hope to add your world to our success story.

We understand that this is all very sudden. Receiving a transmission ‘from the stars’ has likely come as a surprise to you, but we’ve been watching your world for some time and your civilization scores very highly on several relevant metrics. With an evaluation score of ?ERROR_UNDEFINED, the people of ?ERROR_HOMEWORLDNAMENOTFOUND have been flagged as particularly worthy of cooperative enli... Read more 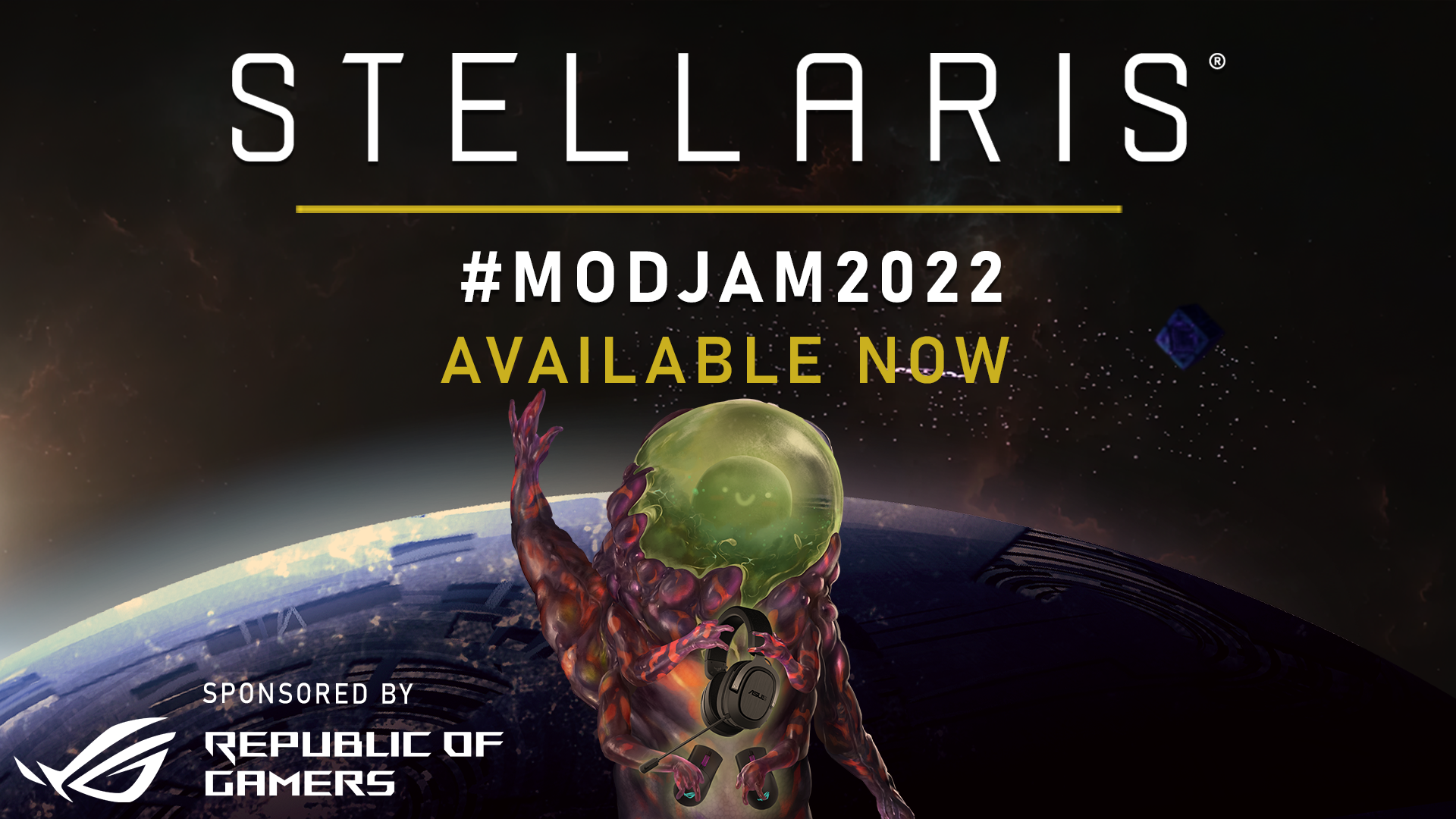 This is the moment you've all been waiting for! #MODJAM2022 is now available!

We had over 70 modders sign up, over 30 design documents submitted, and in the end, ended up with 13 unique modded mid-game crises for you to enjoy! Three weeks ago, we told our modders what they would be making, anything submitted for the Mod Jam had to be created for the Mod Jam, meaning they were not allowed to use previously released content in their submissions.

Now it's time to do your part! The modders spent the last three weeks making the crises, now your mission (should you choose to accept it), is to play the new Crises and vote for your favorite crisis![pdxi... Read more

Comment
08 Jan 21:03     MrFreake_PDX on Steam Forums - Thread - Direct
go to support.paradoxplaza.com and open a ticket, customer support will be able to help you with this!

We’re back with another update on #MODJAM2022! Next week, our weekly dev diaries will start up again on Thursday. But for this week, we’ll be going over the rest of the teasers that haven’t been seen (yes, there’s more!), but first I’d like to add a word of warning:

The teasers seen previously may or may not make it into the final version of the Mod Jam mod. Such is the nature of these things that some people were unable to complete their projects in time for release day, some people have had to drop out due to taking unexpected time over the holidays with family, etc.

From where we stand, regarding releasing on January 10th, I did try to ensure that all the teasers in this update will actually be releasing -- that is not to say they all will -- just that the modders when I approached them, expressed some level of confidence that they would be able to make the deadline.

Also, if you are interested in helping test th... Read more

Welcome to our second #MODJAM2022 update! This week we have more teasers to share, and we’ll delve a little bit more into just how the Mod Jam mod will work in practice.

The last time we did one of these things - all the way back in 2020 - one of our biggest challenges was how to keep the Mod Jam updated in the face of a game that updates every 3 months, sometimes with drastic changes to how the game is played and changing or evolving gameplay and how to reconcile that with the content that the modders originally wrote.

Should we change certain origins in order to make them work better with the reality of what Stellaris currently is in the latest version, or update it just enough to make it so that the origin runs, and call it a day? Do we even have the ability -- ethically, to change a modder’s contribution so that it works in a way that we feel “is better”? What happens if a modder is dissatisfied with our changes? Who tests these... Read more 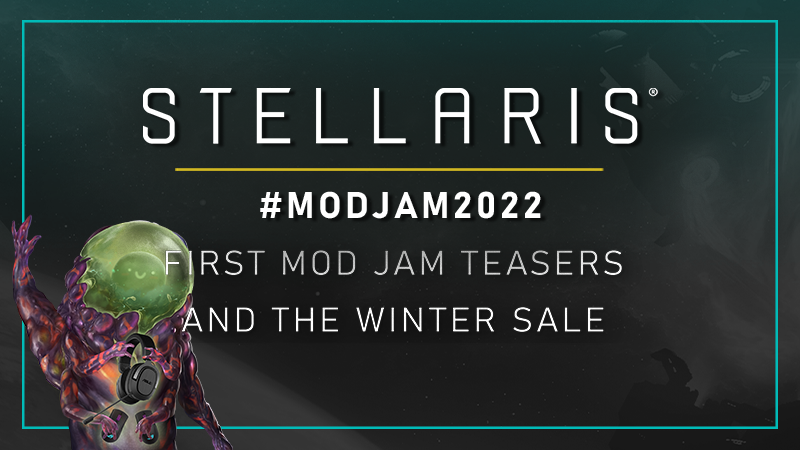 While the devs are off for the Holidays, the marketing and community teams are still hard at work! We’ve got some great stuff going on in the Stellaris community right now that we hope will get you through those dark winter “no Dev Diary” days.

Some of you may have noticed that we began signups for #MODJAM2022 two weeks ago. Last week, we revealed the theme of the Mod Jam: Make a unique Mid-Game Crisis!

This week, we have the first two Mod Jam Crises teasers to share with you folks! We currently look on-pace to have over 20 Mid-Game Crises submitted for this event, which we feel is a great showing from our fantastic Modding community!

Do keep in mind these are all work-in-progress screenshots and features, they may not appear as described (or at all, for that matter) in the... Read more

Can you believe it’s the end of the year already? With the holidays fast approaching, it’s time for our traditional review of how the year went, with a little glimpse towards the future.

After Aquatics shipped at the end of 2021, I started taking over more of Stellaris development in preparation for seizing control taking over as Game Director in early 2022, freeing Daniel Moregård to move on to his next project. I’m quite thankful for the opportunity, and very happy to be given the game in the state that it was in - thanks to the efforts of the Custodian Initiative and the rest of the team, I had a pretty easy time sliding in.

Let’s take a look at what happened during the year, and a glimpse at the near future.

Another relatively short dev diary this time, as we’re scrambling to get a few things done before the looming holidays finally arrive.

This week we released a small update, 3.6.1, to address the following issues:

We hope you are having fun with the 3.6 patch!
The team has put together a hotfix for you, aiming to resolve some issues coming out of the 3.6.0 release.
3.6.1 should now be available for download now.

Please find the changelog below.

Short dev diary today - the team is hard at work putting together a patch for a selection of what we deemed the more critical issues that have come up in 3.6.0, tentatively scheduled for next week.

Among a few other things we're looking at, we're currently investigating the launcher issue that falsely flags all DLC as corrupted, have a few crash fixes ready, and several ship sizes that lacked role definitions (such as Menacing ships) will now have them. As a little quality of life balance change, I also snuck in a speed increase to Juggernauts, making them move at the same max speed as Battleships and Titans.

Overall, I'm quite happy with the stability and quality of the release, which is a positive argument for future open betas in the same style. Thanks for all of your... Read more

Originally posted by xxxVIKTORxxx: okay, it seems that my aquatic species made in previous versions wasn't available on the game start not bc of dlc, but probs bc of some mechanics changed related with this specie settings.

Yes, ruler names have changed. If you edit this species, you will be able to rename the ruler, and then save and use the empire! :D

Comment
29 Nov 20:57     MrFreake_PDX on Steam Forums - Thread - Direct
This is purely a visual bug, and the DLCs should still work in-game. If you've got a save that you could previously load, that you cannot load on the live version of 3.6:

If the issue persists after verifying your game files, please fill out a bug report here: https://forum.paradoxplaza.com/forum/forums/stellaris-bug-reports.941/

Originally posted by crtaylor1: The game crashes as it launches now. Yes I would say that the DLC has corrupted the program. I never had a problem loading the game b... 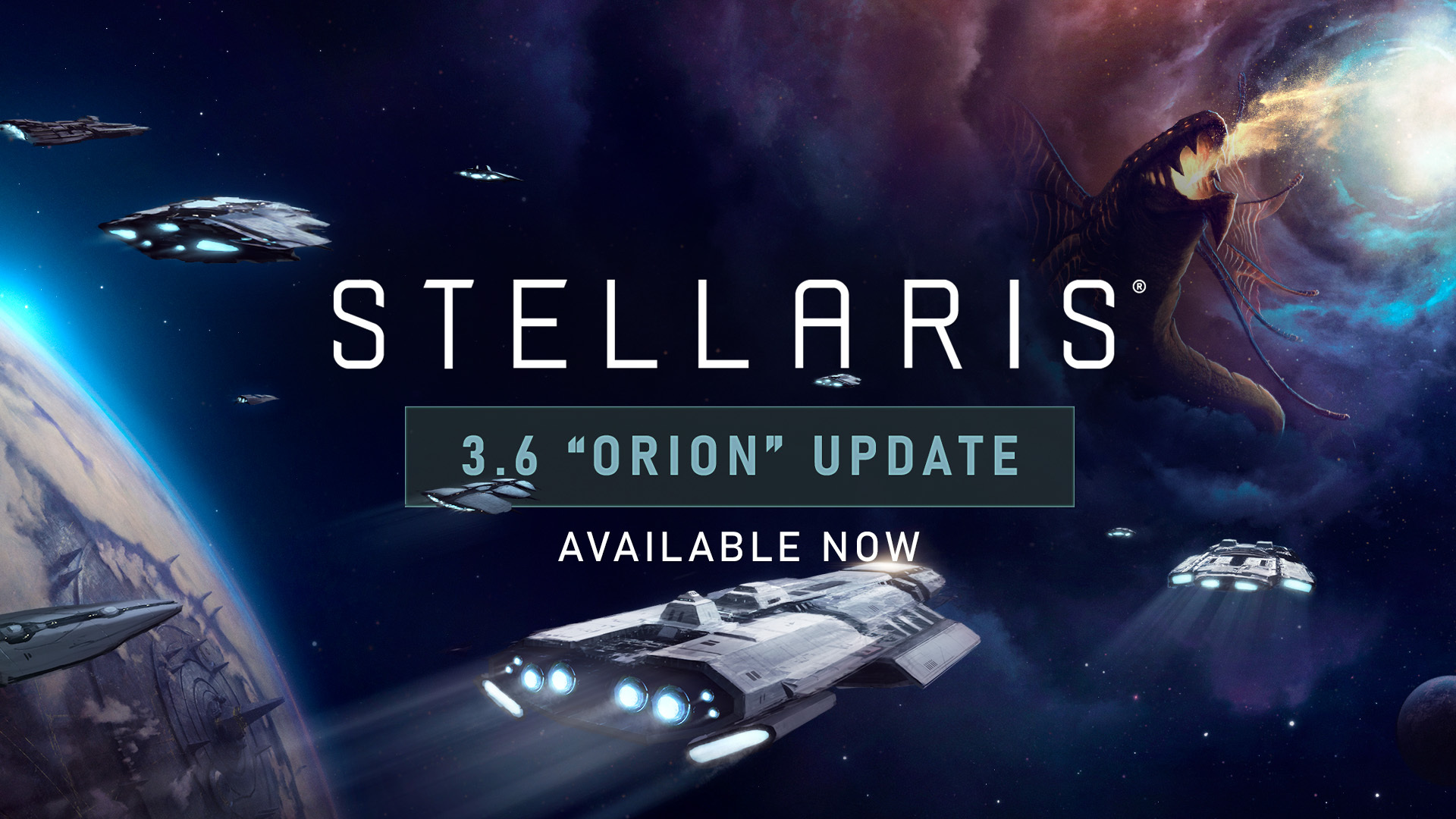 The Stellaris team is proud to announce the 3.6 "Orion" update is now available!

We’re proud to announce that the 3.6 “Orion” update will be released on November 29th!

Want to know exactly what this free Custodian patch contains? Well look no further! We’ve compiled most of the major changes and new features here for your convenience.

The 3.6 “Orion” update contains new galaxy shapes, new artwork as well as the ability for Hive Minds to choose a variation on the Reanimators Civic from the Necroids Species Pack, and a Fleet Combat Rebalance—including a new ship type and changes to combat computers. In 3.6, we’ve also reworked how the Ascension Paths from Utopia work, as well as added a new ascension path. We’ve also added a new Spiritualist Federation type to the specialized federation types from Federations, and added a new “Politics” tradition tree, which also requires Federations. We’ve also added new Orbital Ring buildings, which are included with the Overlord expansion. For base-game changes, we’ve added a ... Read more

I know that we said that we weren’t going to be updating the 3.6 “Orion” Open Beta branch again, but since the Thanksgiving holidays are coming in the US, I’ve asked for one last update to be pushed to the open beta branch, with a potential release candidate.

This update should be going up right about now, so you get this week's dev diary a day earlier than usual.

Release Candidate, does that mean…?​
Yes, Orion will be released soon. We’re currently targeting the 29th of November unless unexpected issues arise from this final (really!) beta release.