17 days ago - CG_Tusken_Meathead - Direct link
Hi Holotable Heroes,
Our latest Title Update introduces a number of quality of life changes for Mods and a new feature, Mod Calibration! Mod Calibration allows you to tune your Mods even further by transferring slices between secondary stats to create the best Mods for your collection. Each Mk VI Mod can be Calibrated a limited number of times using the new currency, Micro Attenuators, and gives you the chance to improve your good Mods into great Mods. MODS RECALIBRATION
Mod Calibration begins by choosing a secondary stat on a mod. The stat you choose will have one of its slices removed at random, and then a new slice will be applied to one of the four available secondary stats on the mod. A few things to keep in mind: Additionally, a mod can only be calibrated starting at Mk VI (6-Dot) rarity. Slicing up from 6-E to 6-A will give the mod more calibration attempts. All your existing Mods at 6E-6A will have calibration attempts ready to go. 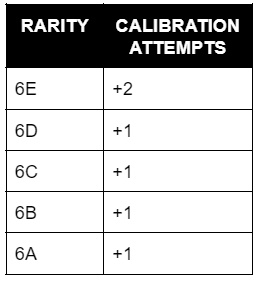 Calibrating a mod requires the new currency Micro Attenuators which currently drop in Mod Battles (9A - 9F). The more times a mod is calibrated, the more Mod Attenuators will be needed to perform the next calibration. Below is the cost based on the attempt number. 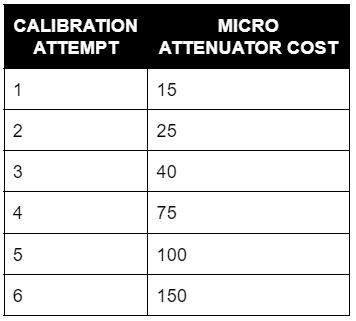 Question: Are rolls for Mod Recalibration weighted the same?

Answer: Yes, you have an equal chance to roll onto all secondary stats. This includes the stat that you've selected to reroll.
← More from Star Wars: Galaxy of Heroes