There are 2 fixes in this update to address issues with the new Territory Battle before the next event begins. See below for details.

Thanks for all your questions on the Kit Reveal, we appreciate your participation. We focused on questions related to Third Sister specifically. Many of the Territory Battle questions will be answered in the next FAQ early next week.


Third Sister's Kit Reveal: CLICK HERE
Will you be selling 3rd sister shards outside of the special mission? -King Bob & jakeus
Like Ki-Adi-Mundi and Wat Tambor, we will not be selling Third Sister shards initially, but they may be sold in the future.

Today's hotfix contains 1 change. It removes Scythe from Operations in Phase 1 of the Territory Battle: Rise of the Empire as it is required in a Combat Mission in that phase.
Post
09 Dec 00:19     CG_SBCrumb on News - Thread - Direct

Aphra's doctorate may be in archeology but her true passion is treasure hunting. An unpredictable nature leads her on chaotic adventures in which she must use her wits and inventions to come out on top (most of the time). From Darth Vader to Luke Skywalker, Aphra's colleagues have run the gamut, but her trusty droids have never let her down. Okay, there was that one time 0-0-0 and BT-1 led a crime syndicate on Son-Tuul and blackmailed her into serving them. But who's counting?

Aphra and her droids like debuffs, so she can siphon Potency from enemies and do damage based on her Potency with her special abilities Dangerous Tech and Rogue Archeology. Her Leader ability Suspended Doctorate and Unique ability Droid Savant provide her with opening Turn Meter as well as Speed for her droids. Furthermore, they will also gai... Read more

Comment
06 Dec 23:58     CG_SBCrumb on Forums - Thread - Direct
Units used in Operations[/b]
Operations function the same as Platoons and Squadrons, but may contain a mix of Characters and Ships instead of only including one or the other. Rise of the Empire is Territory Battles but on a grand scale and includes many different types of characters, including Galactic Legends and Conquest units. Guilds that are at the level needed to compete in Rise of the Empire are well prepared to fill these Operations with some careful forethought and planning.

These are static Operations and should remain the same mix of units in the same quantities and spots for the foreseeable future, so your guild will have targets to aim for to make sure they can fill out the Operations every time they play Rise of the Empire. 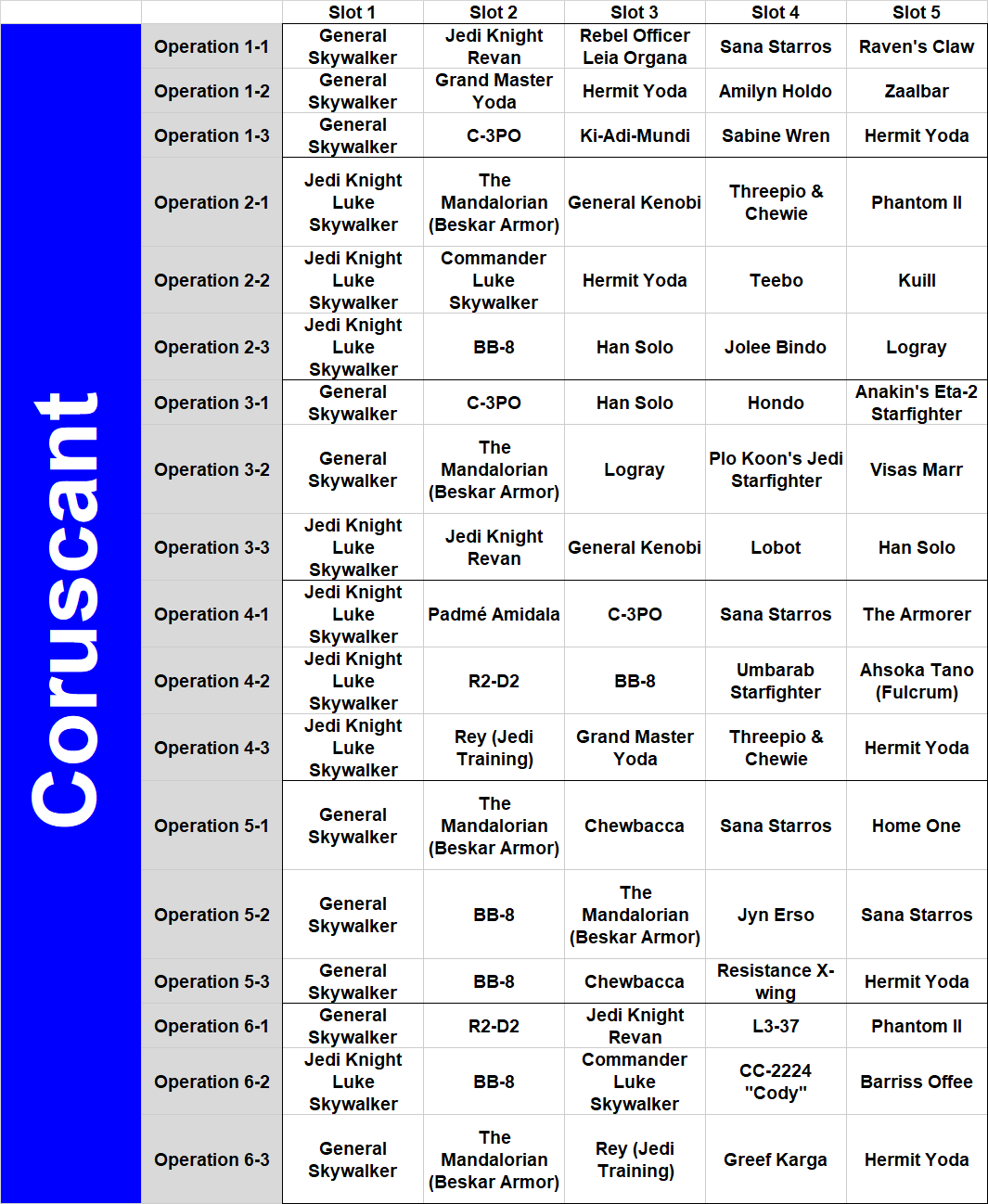 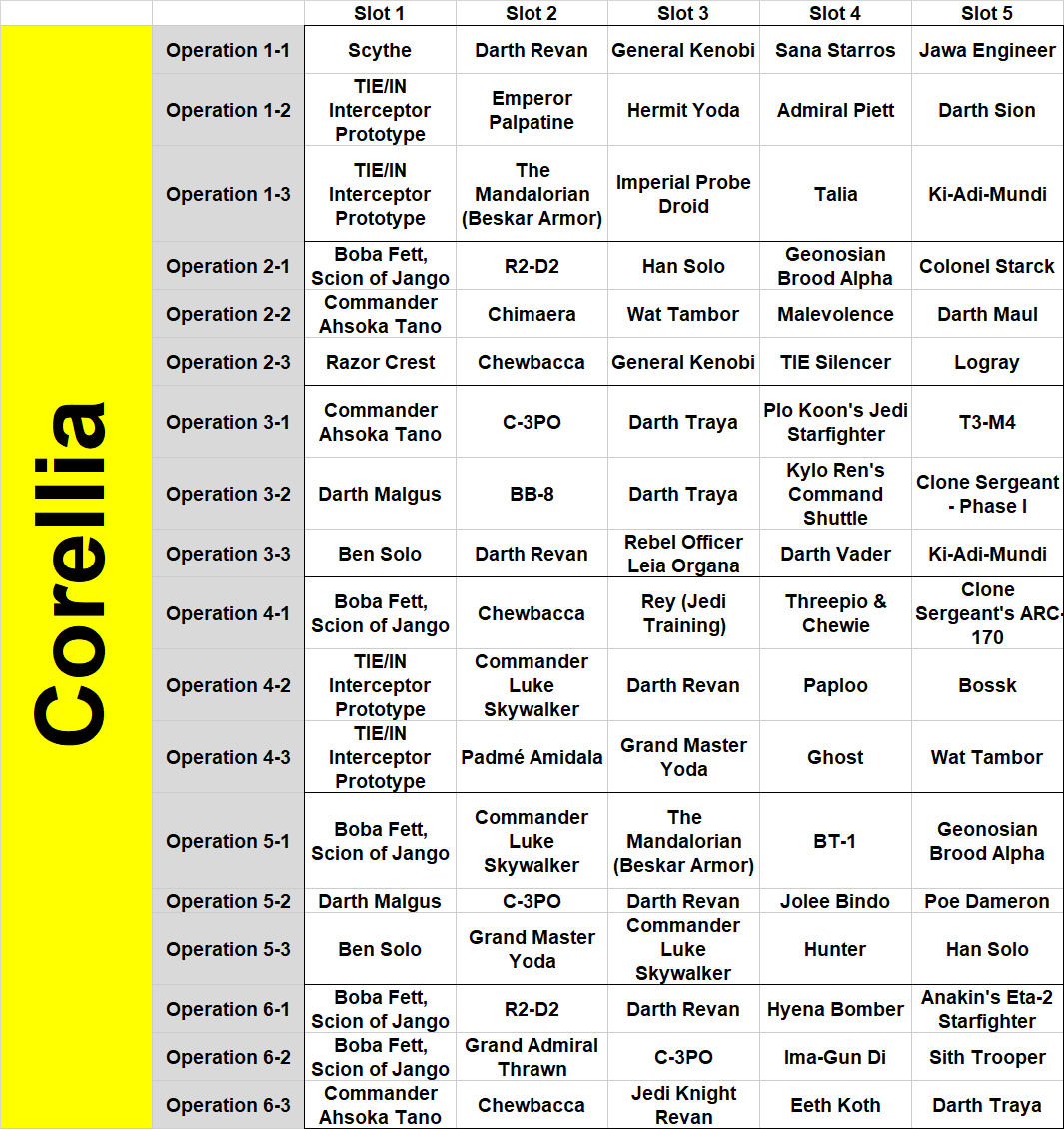 Overview of Missions, Modifiers, and Required Characters & Factions
Each phase will require characters of a specific Relic level. Not all squads composed of that Relic level are guaranteed to clear every wave of every encounter in that phase. Even squads and characters over the minimum Relic level may find certain encounters or planetary modifiers insurmountable due to the nature of the battle.

We are including here a breakdown of what units and factions will be r... Read more

Welcome to the November Road Ahead! Below you will find all that you could wish for in regards to our Seventh (!) Anniversary Celebration, an update on the new Territory Battle, a sneak peek at a Gear economy update and Doctor Aphra!

Thank you for your continued journey with us in Star Wars: Galaxy of Heroes and as always we look forward to sharing the latest updates with you and hearing your feedback.

Now without further ado - grab a snack, kick back, and put on your reading glasses.

It’s celebration time! We have a lot in store for you from FREE things to great deals! Here is just a snippet of what you can look forward to:
Read more

We have released a small Scheduled Update to revise shipments for the conclusion of Datacrons Set 2. There was also a very minor bug fix that addresses Jabba's placement in the One Famous Wookiee event.

That is all for today's update, see you on the Holotables!

We are live on twitch to raise money for charity! Come Join us now!


When will you be streaming?
Stream Day on Saturday, September 24th from 10AM PST to 8PM PST.
... Read more

The latest Road Ahead video for Galaxy of Heroes is available now! Join CG_Tusken_Meathead as he presents the latest news for SWGoH and hear directly from the developers about the projects they are working on.

Watch the video below or read on to see the highlights! 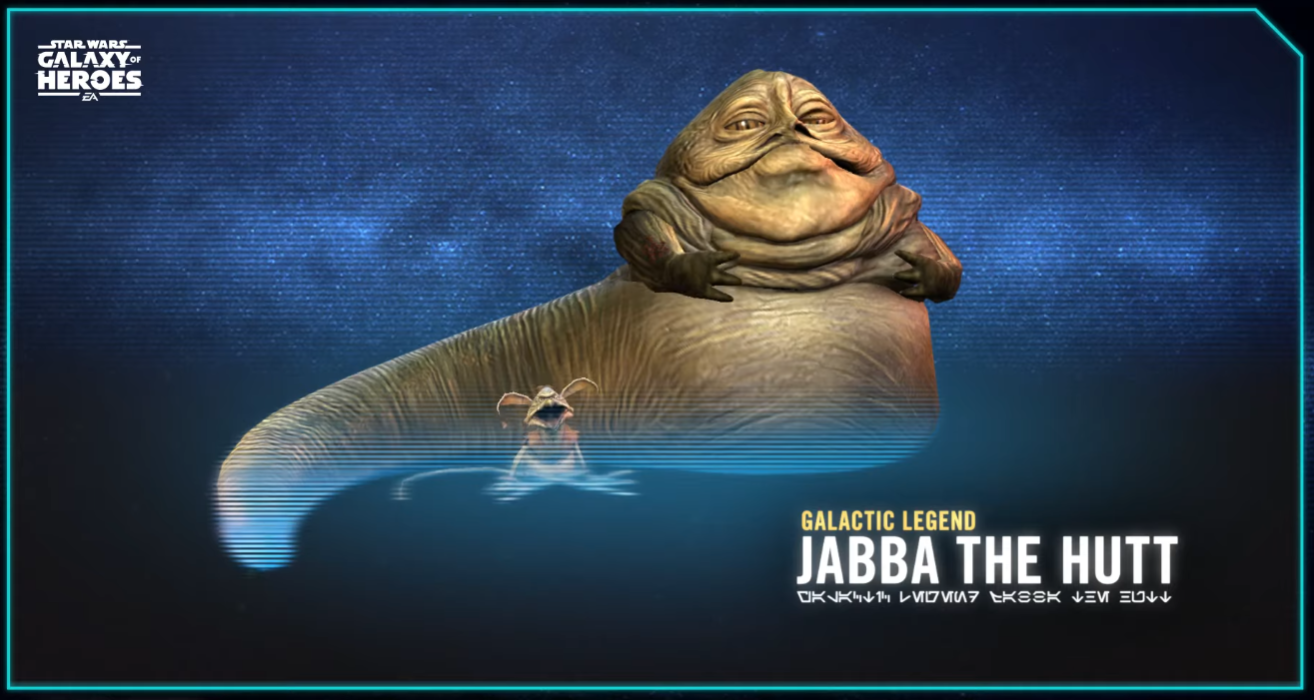 Galactic Legend Jabba the Hutt will slither onto the Holotables very soon! One of the most powe... Read more

Over the weekend, we discovered approximately 50 accounts were unfairly credited with in-game items.

An investigation is on-going, but what we can tell you is that we have since banned the accounts involved and are working to ensure this doesn’t happen in the future.

In this case, the combination of data monitoring tools and player reports allowed us to address this issue quickly, so thank you to all of those who reported this issue to us.

Single stage? No globe trotting required? Nice try, not my puzzle. Oh and there is no Relic 10...

If you are still experiencing issues with the Find Flow for Datacron materials or the Raddus soft lock where the client can freeze when using the ultimate in some scenarios, we highly recommend you double check your app store for any updates to the game.

There was an issue with updating some clients after a recent update and there could be other potential issues if you do not have the latest client. If you are unsure if you have the latest version, head to your app store and check to see if there are any updates available for the game.

This issue will be resolved in the next update. Thank you for your understanding.

How is Greedo not in the Hutt cartel? He literally tried to make Han Solo get Jabba his credits in the beginning of New Hope

Today we have an exciting State of the Galaxy focused on two major announcements: an upcoming Title Update with many quality of life changes for Mods, and a new Galactic Legend. But that’s not all, we have a new Capital Ship that will rival the Executor and a marquee that will tie into the new Bounty Hunter Galactic Legend.

The mercenary and bounty hunter Krrsantan is coming to the holotables soon. You can find Krrsantan’s kit here and read more about him in his ... Read more
Post
19 Jul 23:03     CG_SBCrumb on News - Thread - Direct
[ Developer Insights - Kit Reveal ] 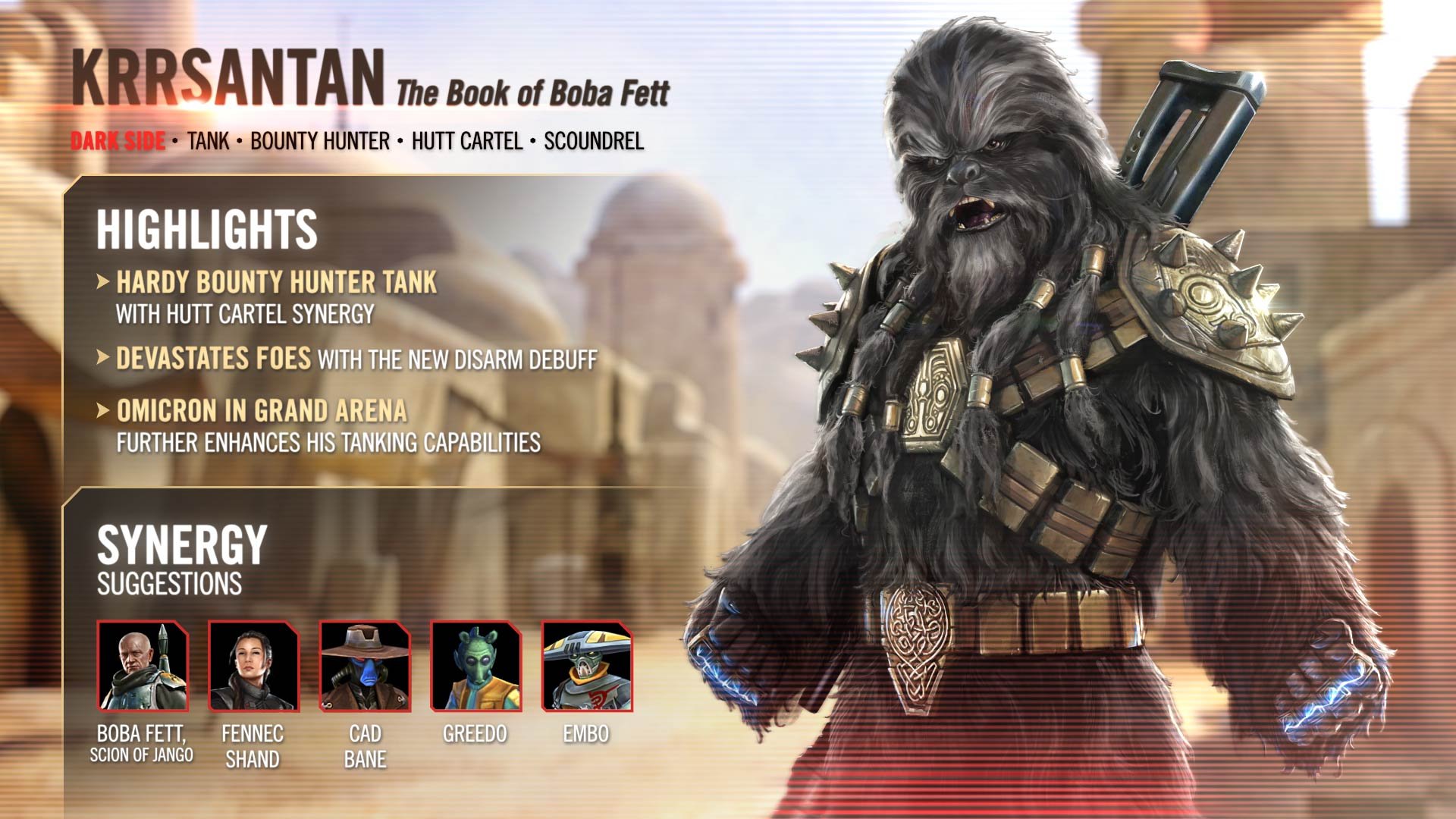 Hi Holotable Heroes,
Krrsantan, the vicious Wookiee warrior, is coming to the holotables!

Krrsantan is a Bounty Hunter Tank who specializes in protecting his Hutt Cartel allies. His Special ability, Dismember, introduces a new debuff Disarm. Disarm reduces a unit's Critical Damage and Offense and inflicts them with Damage Over Time whenever they use a Basic ability. Hutt Cartel allies stack Offense when critically hit through his Leader ability, Formidable Ferocity, and Krrsantan can gain Taunt and recover Health and Protection through his Special a... Read more

We have released a hotfix to address the issue with Raven Claw that we mentioned here.

We are kicking off this quarter’s Road Ahead with a recap of what was announced at Star Wars Celebration in Anaheim and a peak at the upcoming legendary event for The Grand Inquisitor. After that we’ll dive into the next upcoming feature for Star Wars: Galaxy of Heroes, Datacrons! 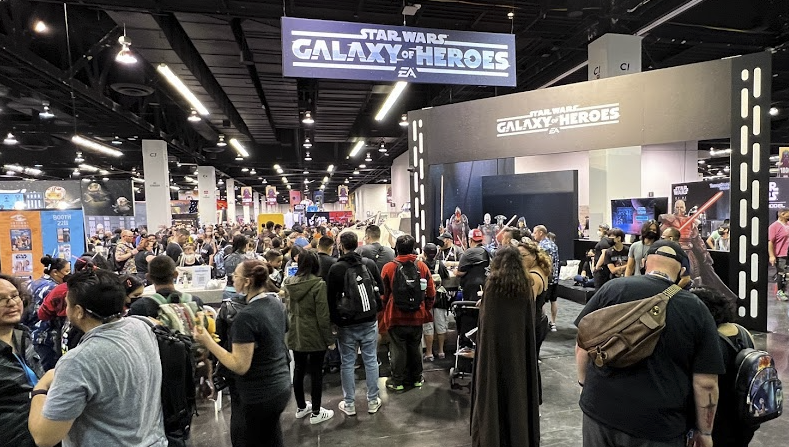 We had an amazing time at Star Wars Celebration 2022 and were excited to meet so many members from our community!

Post
04 May 17:13     CG_SBCrumb on News - Thread - Direct
Hello, yes we are aware that a portion of our test environment was leaked recently. As a reminder, unless we officially talk about it, things such as images/items/text/etc are subject to change. In a Test Environment, it is common practice to have placeholder items (R9 requirements as an example) in locations for ease of testing and do not represent what the final product will look like. These sit there to allow functionality of a product to be tested and will be adjusted to their intended items and functionality prior to launch.

Due to the feature still being a work in progress, we aren't ready to share real information currently, but look forward to doing so in the future.

Have a happy May the 4th