15 days ago - /u/ - Direct link
A lil somethin somethin: You can find the details for this event on the announcement page here.
15 days ago - PDXRyagi - Direct link
Welcome to our next Development Diary for Europa Universalis IV! For today we take a look at a fan favorite™ of the Scandinavian region: Scandinavia itself.

Unlike our other Scandinavian kingdoms, the unified country of Scandinavia was never a real country. Yet it is undeniable that Denmark and Sweden tried to unite Scandinavia under their own banner during the history of this region. The Kalmar Union was the closest to a unification of these countries.

As Scandinavia is a formable with little historical ties we decided to make its mission tree into an extension of pre-existing mission trees of Sweden, Denmark and Norway. The newly gained missions are either an expansion on the current playstyle, or are mirroring key missions from the other Scandinavian Kingdoms. So let us go through the different tags and how forming Scandinavia impacts them. 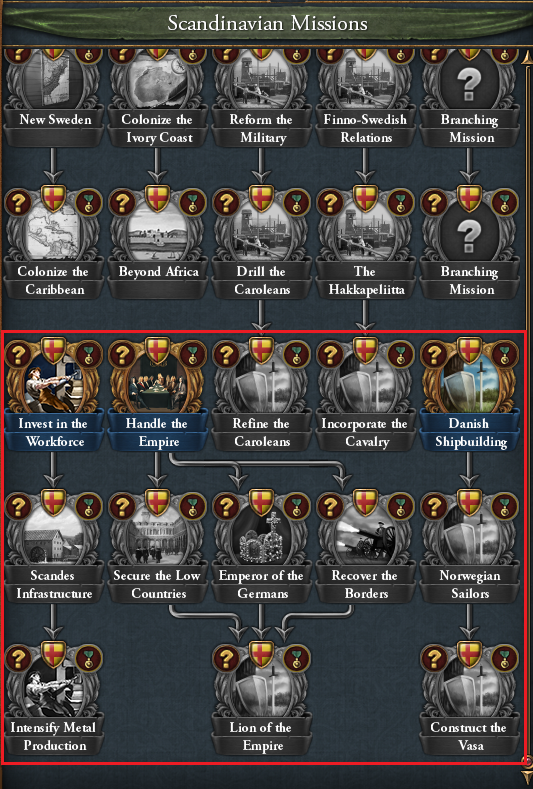 Sweden receives three new branches of their mission tree and two additional missions expanding the Caroleans and Hakkapeliitta even further.

Starting from the left, the missions “Invest in the Workforce”, “Scandes Infrastructure” and “Intensify Metal Production” are newly acquired missions which are available to both Denmark and Sweden when forming Scandinavia. They give you access to the Mountain Expansion privilege as well as the event chains to discover new sources of copper, iron and even silver in Scandinavia. So in other words: they are the development missions of Norway.

The missions started with “Handle the Empire” are Swedish specific as they are a continuation of Gustavus Adolphus’ ambitions in Germany. Either through conquest or diplomacy, the goal of these missions is to dominate the Holy Roman Empire. The great payoff of uniting Germany is the following reward: 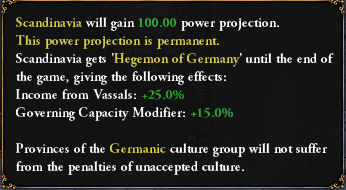 Note: keep in mind that at this point you already are the strongest nation anyway, so the payoff is one final “get richer” reward.

The final branch on the right covers the construction of a flagship which should be the pride of Swedish Scandinavia. Of course this whole branch is a reference to the Vasa. 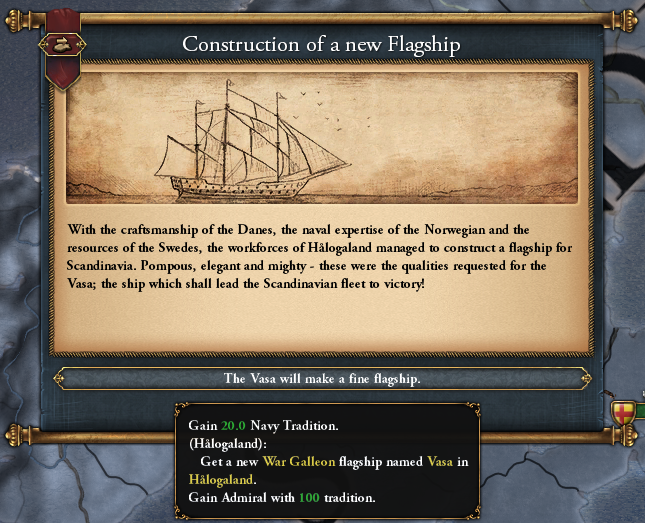 However, if you had the event “The Sinking of Vasa” before then this event changes slightly: 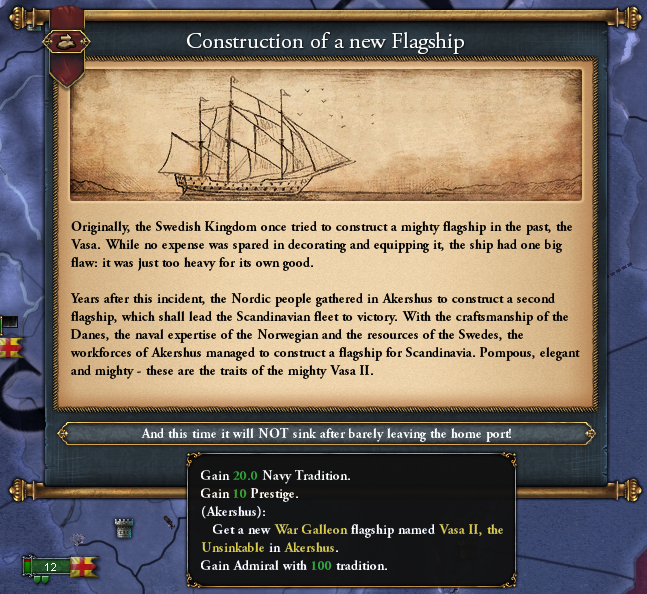 The missions “Refine the Caroleans” and “Incorporate the Cavalry” revolve around the Carolean and the Hakkapeliitta. With the former mission you need to specialize even further into your military by reaching 20% Discipline OR gain 14 Military Power per month, have 25 Swedish or Finnish provinces with a barracks and at least 75% Army Professionalism. As a reward you get the following effect: 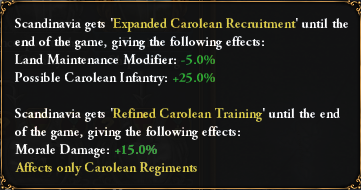 Note: This image of the Carolean buff has been done before we got to rebalance it. Right now, the reward is not set in stone.

Meanwhile, the cavalry requires you to have the Hakkapeliitta in action for 5 years as well as either having 20% Cavalry Combat Ability OR 50 cavalry in total, and having at least 10 Finnish provinces with 10 development and a barracks. 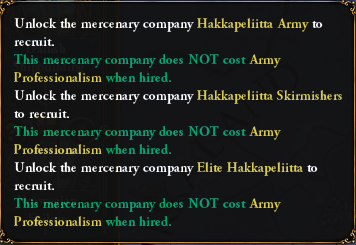 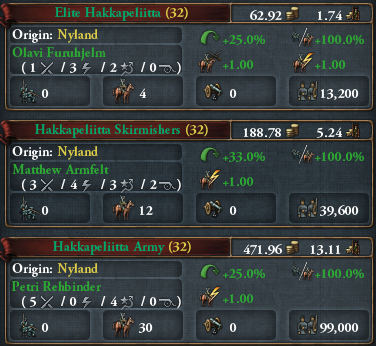 You might notice that their names are in green. The reason for that is to showcase that these mercenaries cost no Army Professionalism to hire. They also possess a special tooltip when you hover over them to showcase their special feat: 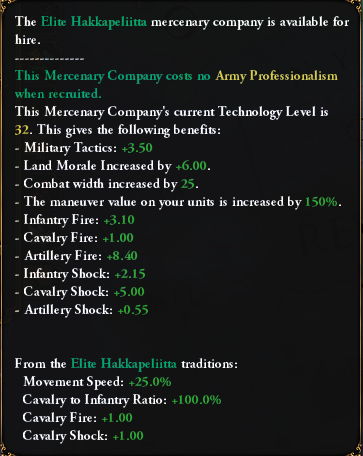 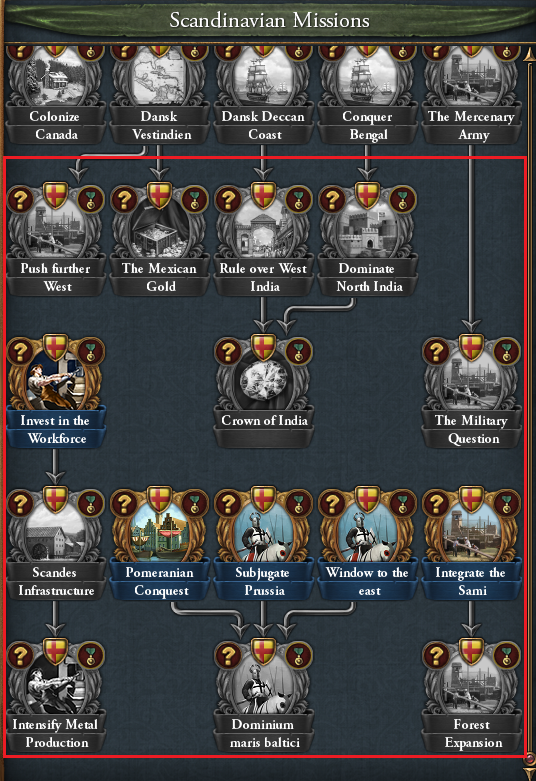 As Denmark your missions for the Indian subcontinent get expanded even further. “Rule over West India” and “Dominate North India” give you claims on the vast Indian regions while the “Crown of India” finishes this path of the mission tree with a permanent modifier which increases Trade Steering by 20% and Trade Company Governing Cost by 25%.

Note: We did and still do consider adding the Indian estates as a reward too for the “Crown of India” mission. Due to problems with the UI (the estate window would require a rework to be able to show more than 5 estates + crownland at the same time) as well as the issues of immersion (all the Dharma estate events will assume you are an Indian nation, not a Scandinavian foreign power which happens to own India) we are hesitant to add this reward though.

Additionally to the development missions of Norway, you also get the ones of Sweden, which are about the Sami and the Forest Expansion. These two missions are shared with Norway. You also gain the Swedish missions about dominating the Baltic Sea and conquering the entire coastline of said sea.

Finally, the mission “The Military Question” is the finisher for the mercenaries of Denmark. By having a completed Military idea group, 30% Army Professionalism, 40% Army Tradition and a level 3 Military Advisor you can fulfill this mission and trigger the following event: 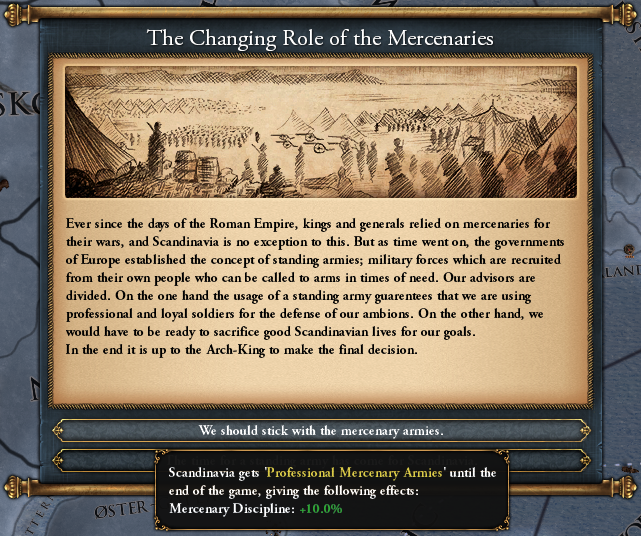 That was the Danish Scandinavian missions. Last but not least, let’s see what Norway gets from forming Scandinavia.

Norway gets the biggest addition to its mission tree with 17 new missions from forming Scandinavia. 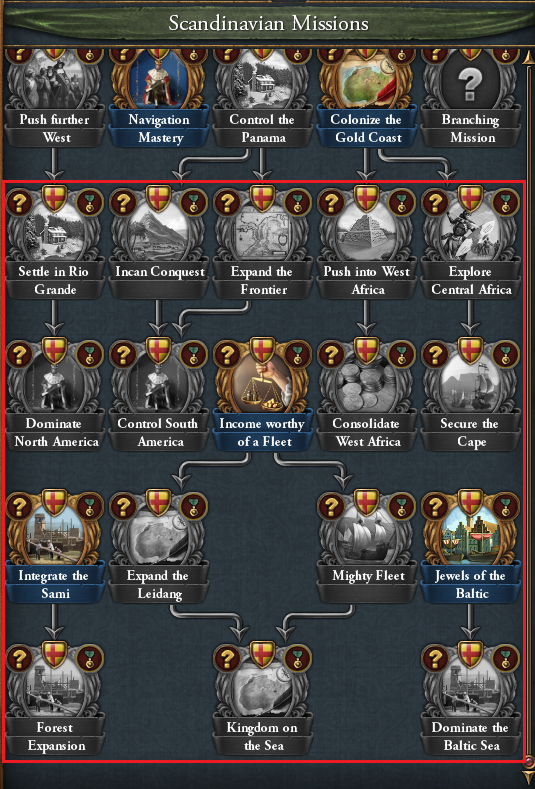 As Norwegian Scandiavia your New World ambition gets expanded way beyond North America. Do note that the “Dominate North America” and “Control South America” are not only about colonizing these continents, but also about keeping your rivals and enemies away from there. “Settle in Rio Grande” will give a permanent claim on every province owned by your rival/enemy or by their subjects in North America while “Expand the Frontier” does the same for South American provinces.

The final mission rewards of dominating the entirety of the New World are two permanent modifiers: 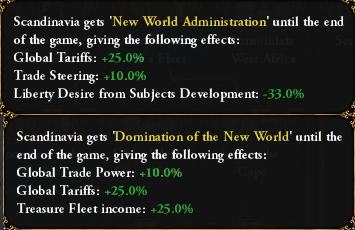 You will also gain some old world related missions such as new goals in Africa and the Baltic Sea.

The more exciting missions are, however, in the middle. With “Expand the Leidang” you unlock two new estate privileges for the Nobility which mirror the customizability of the Swedish Caroleans - but not it affects your marines. 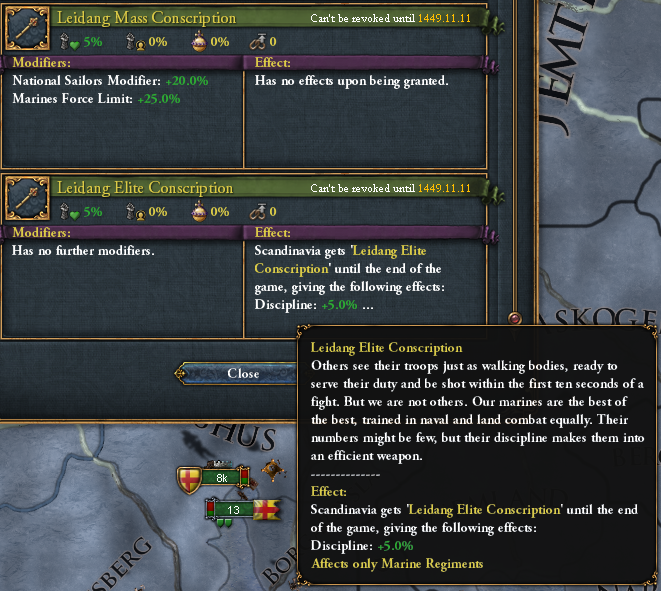 Finally the mission “Kingdom of the Sea” gives a permanent 20% Good Produced and the bonus of getting 0.5% Army Professionalism whenever you hire an admiral.

Those were the Scandinavian mission trees for the three kingdoms. Of course you know that Scandinavia is not a formable exclusive to Sweden, Denmark and Norway, so the question arises: what happens if somebody else forms Scandinavia? Don’t worry, we got this case covered! 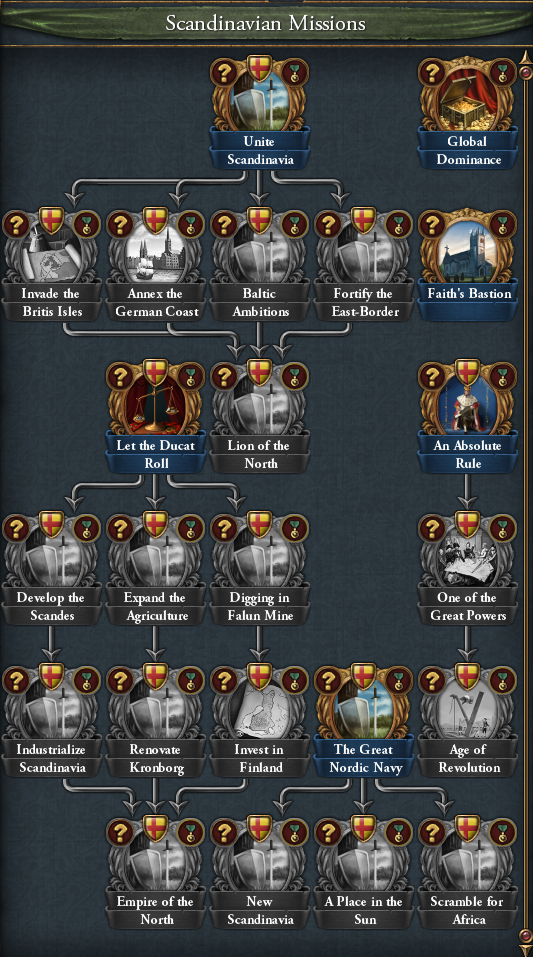 The Scandinavian mission tree was mostly inspired by the Germany mission tree as both formables are late game “what if” nations in EU4. Because of that the mission tree is split into 4 branches:

That was it for the Scandinavian content for the DLC. However, I am not done yet with them as there are other changes related to this tag. First thing (and I know this one might not be very popular): Scandinavia is an Endgame Tag, which means you cannot form any other country other than the Roman Empire and the unified HRE.

To compensate this, however, Scandinavia receives its own unique set of ideas which reflects the different aspects of the Northern kingdoms:

Now we have the third and final iteration of them:

Additionally, we reduced the number of development required to recruit a Carolean unit. Now you can recruit one regiment of Caroleans for every 10 development of Swedish or Finnish provinces.

The goal is to make the Caroleans more into the standard army of Sweden than a special elite force, but they should still have a significant punch. Maybe this version might be a bit too strong, but that is the one we will stick to until the release of the DLC.

Last week’s development diary showcased the monarchy government reforms and today I want to give an update in that regard.

Many of the new reforms and changes to old reforms adjusted absolutism for monarchies which was not a very popular approach whatsoever. Because of that we have decided to drop this idea entirely. We also did some rebalancing of the tiers. Here is the new update of the monarchy reforms: 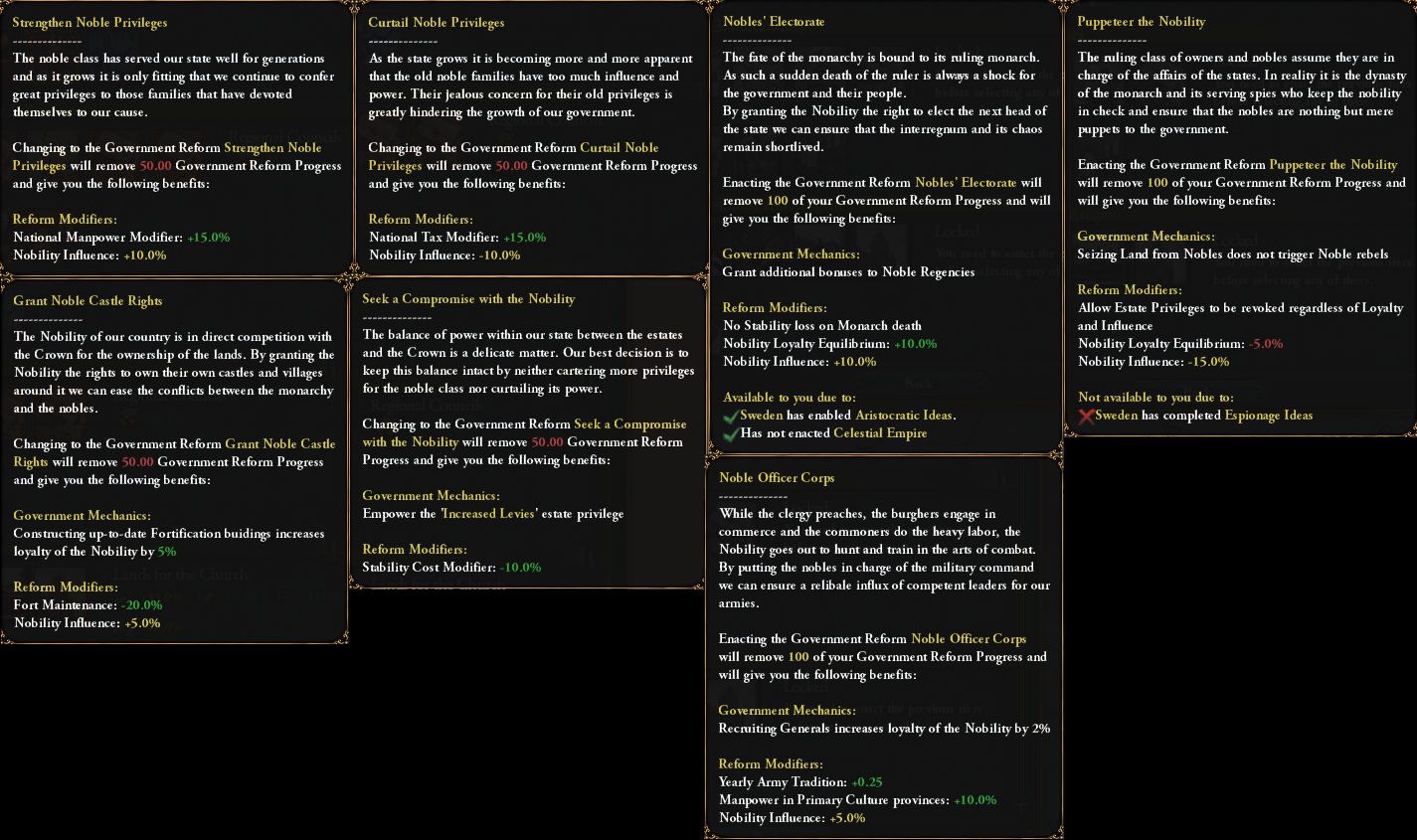 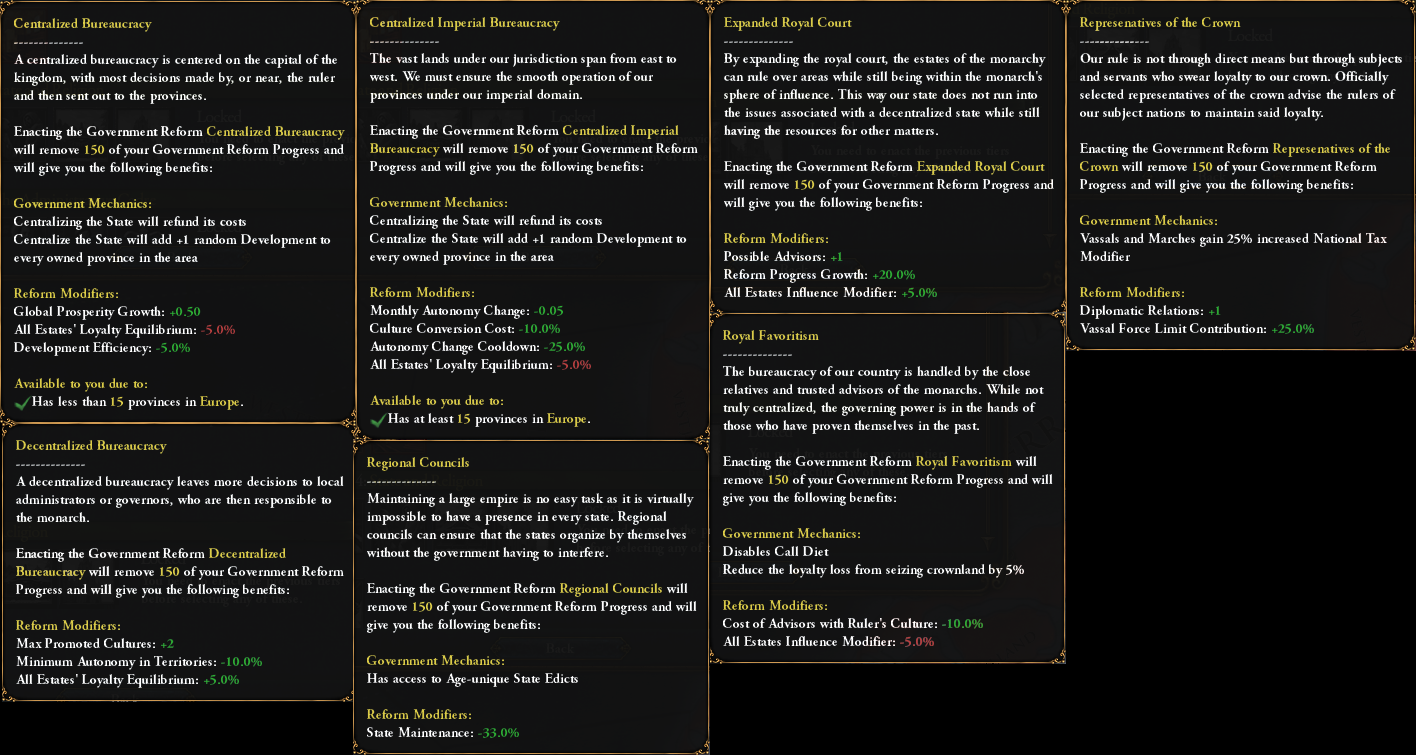 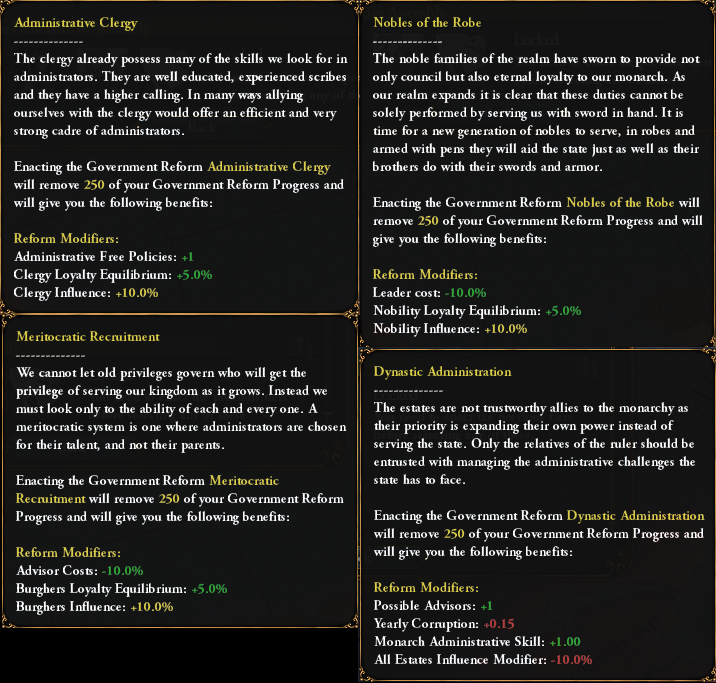 Note: Only the “Dynastic Administration” is new here. The other three reforms are untouched from the current version. 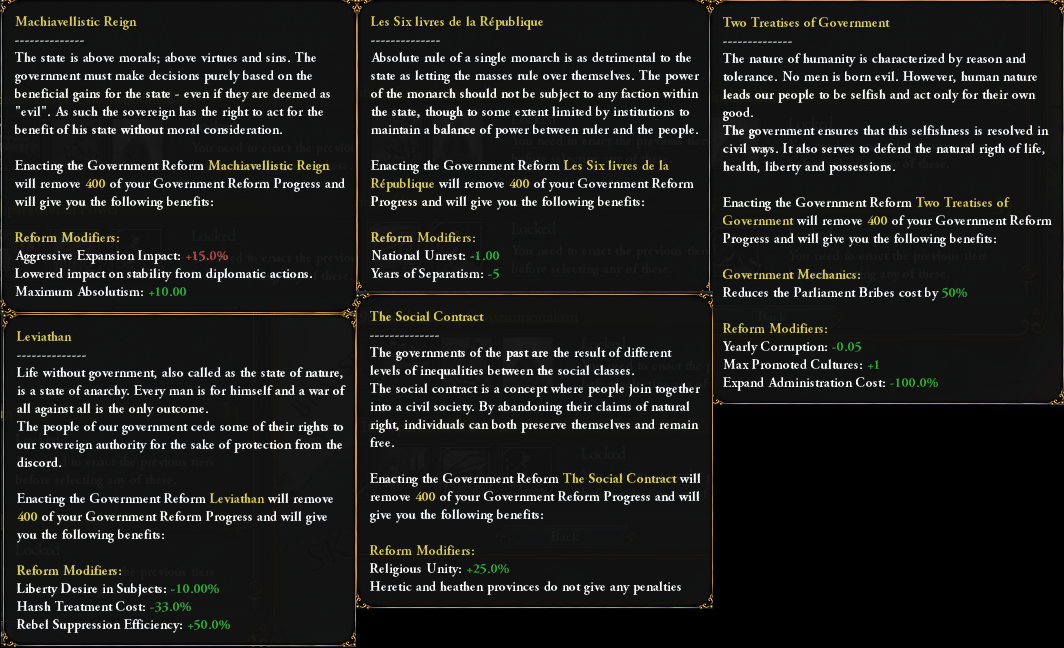 Note: L’Etat c’est moi is also part of this tier, but unchanged.

Note: Not in picture, “Become a Republic” and “Install Theocratic Government” are also part of this tier, but unchanged.

We also overhauled the republican reforms too. See for yourself!

Note: Merchant republic related reforms will not be touched and are not shown here. 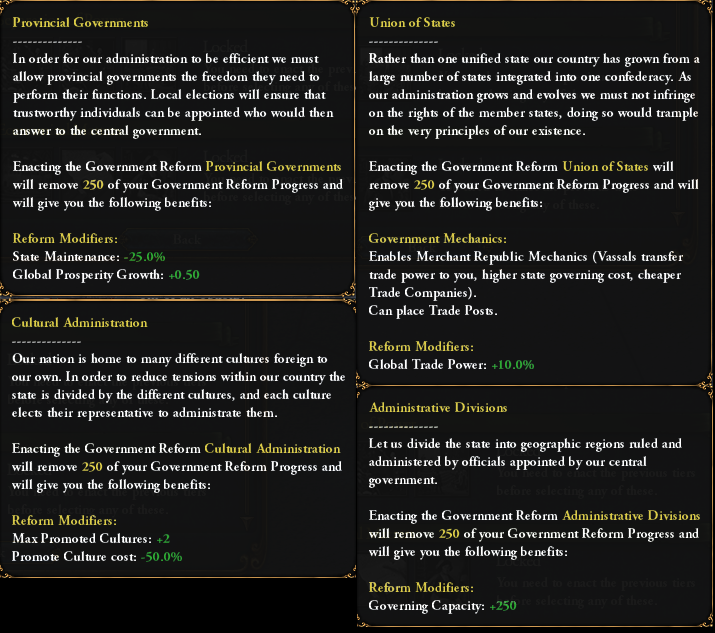 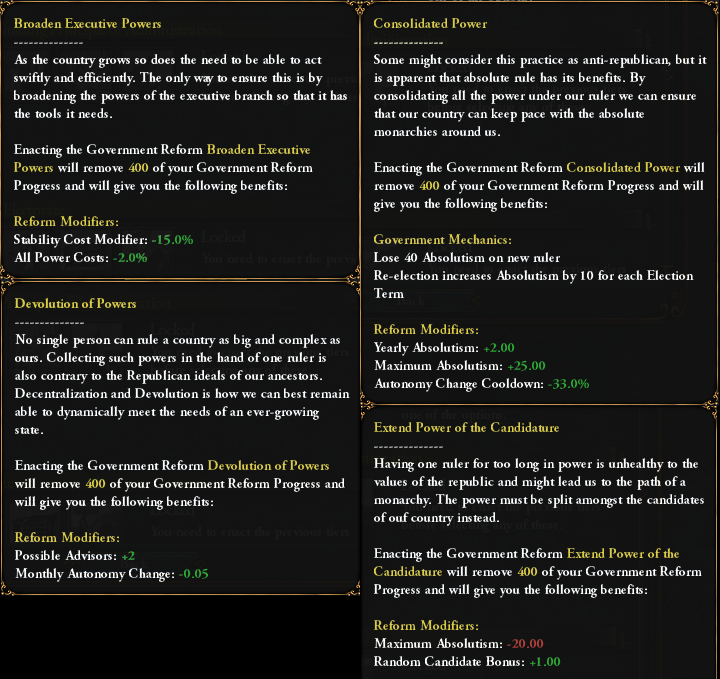 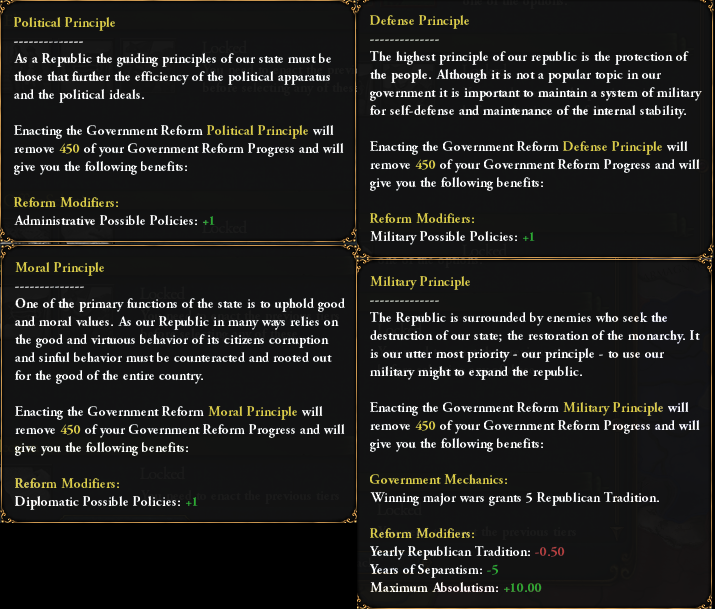 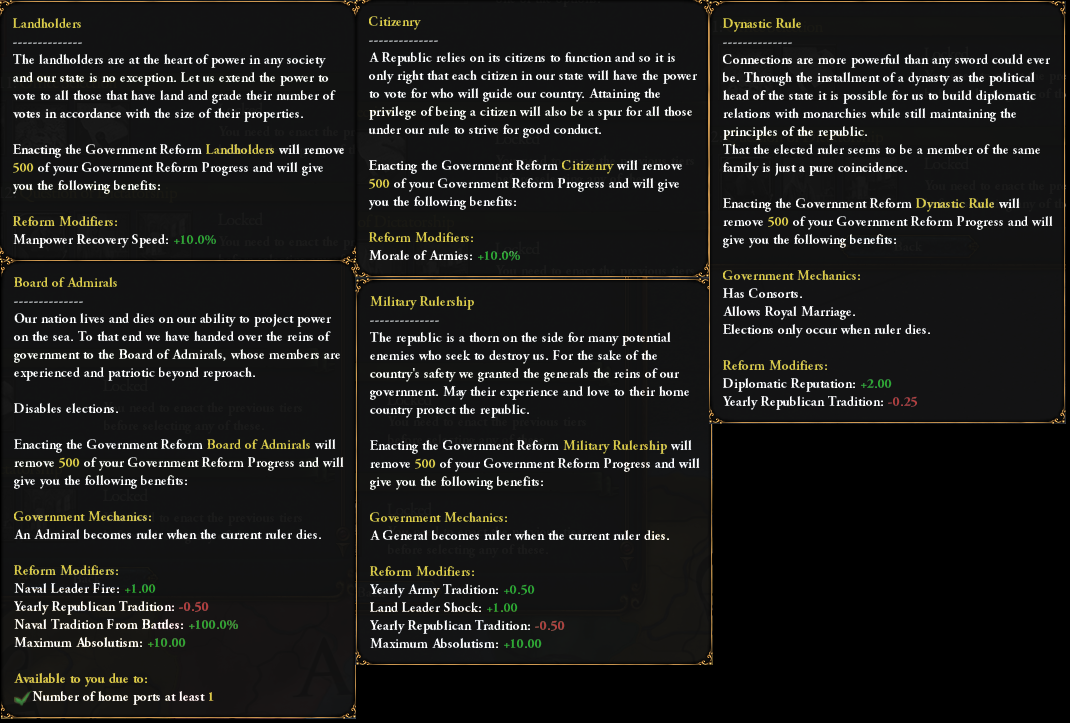 Here is also an update for the shared Tier 4 and 7. 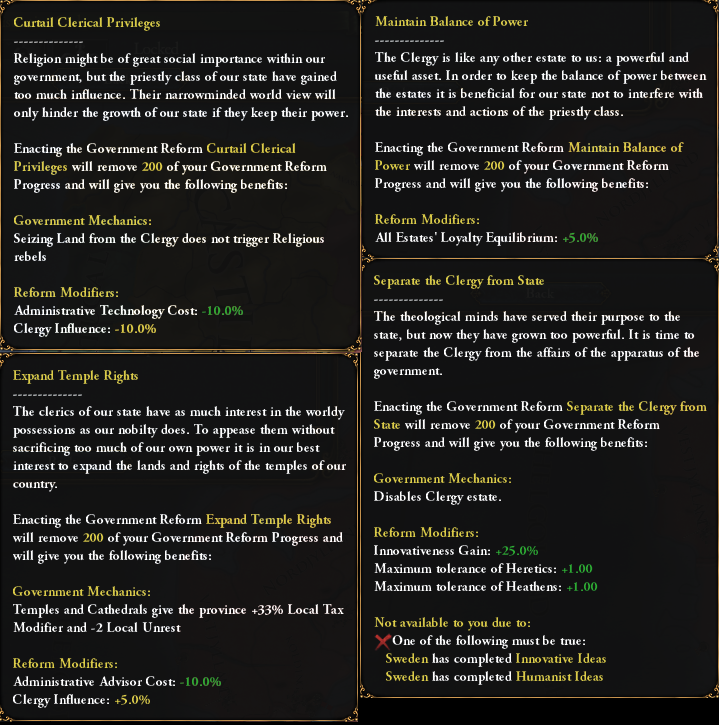 Note: All the different reforms for the religions will be revealed in a later Development Diary. 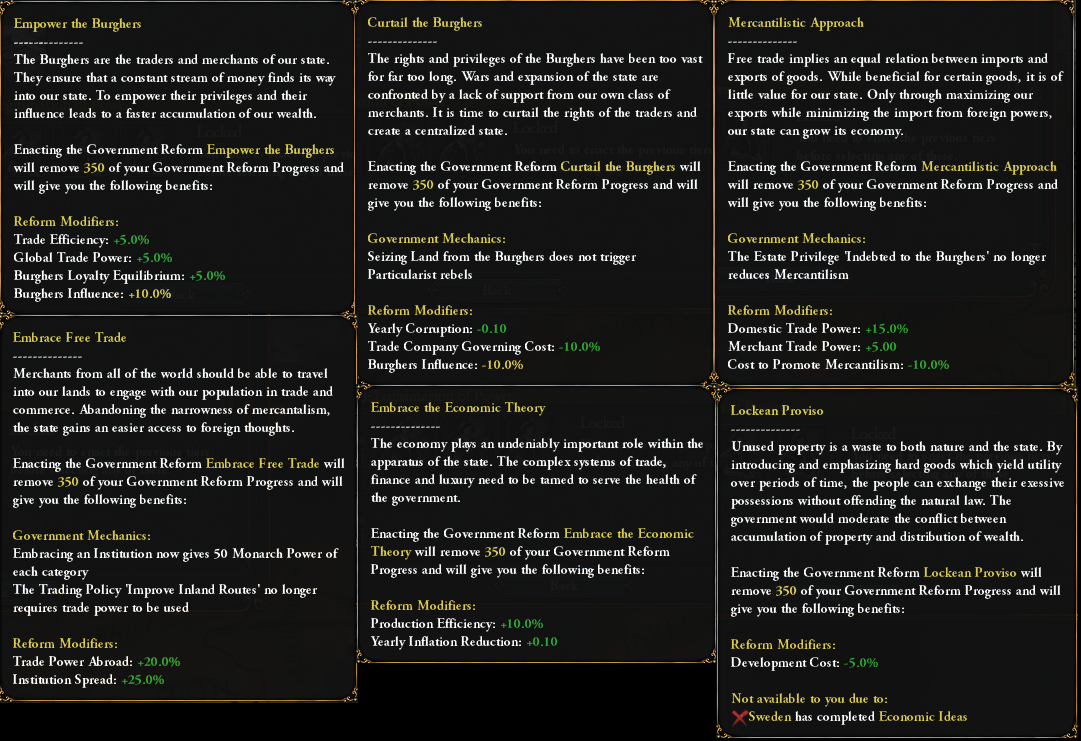 This was it for this week! Next week we will take a look into a region on the other side of the Baltic Sea. I won’t say which region, but expect for next week to learn to hate your nobles when you play the star of next week’s Development Diary.

Until then I wish you all a nice week!

EDIT: I just noticed that the numbers for the army tradition decay modifiers are off. Of course we mean -0.3% and -0.1% Army Tradition Decay, not -3.0% and -1.0%. This has been fixed internally already.
← More from Europa Universalis IV