20 days ago - /u/ - Direct link
Kleine Zusammenkunft: Sie können die Details zu diesem Event auf der Ankündigungsseite finden.
20 days ago - PDXRyagi - Direct link
Welcome to our next Development Diary for Europa Universalis IV! Today we dive into the last starting Kingdom in Scandinavia, which has not been covered yet: Norway.

As for Denmark and Sweden, the History of Norway in the Modern Age directly depended on the fate of the Kalmar Union. After the accession of the House of Oldenburg to the Danish throne in 1448, the Danish kings increasingly centralized government, even if a Norwegian Council of State formally governed the country. In fact, Norwegian landed nobles and merchants prospered under this system, as they were effectively the middlemen between the Crown and the commoners. Although some rebellions arose, such as that of Knut Alvsson, the conflicts with the Danish crown were of much less intensity compared to Sweden. This changed with the Reformation, as Frederick I and Christian III's adherence to Protestantism sparked a revolt led by the Norwegian Church. However, it was defeated in the decade of the 1530s, so Denmark and Norway remained Tvillingerigerne (Twin Realms) until 1814.

Although Norway’s history is intertwined with that of Denmark throughout the EU4 time period, we have decided to reflect in the new mission tree for Norway the potential ambitions and challenges it would have faced had it broken free with the end of the Kalmar Union.

Keep in mind: Norway’s mission tree was created before the mission trees of the Teutonic and Livonian Order. As such, the mission tree for Norway is a lot less “what if” even though they were historically no winner either. With that being said, let’s get a look at the details of the tree.

The missions of Norway are split into three themes: gain independence from Denmark and place your own Monarch on the Danish throne, Colonization and internal missions.

Starting with the independence missions, the mission “Norwegian Allies” can be completed by having two rivals or enemies of Denmark have 100 opinion of Norway. As a reward you can request their support through the following event: 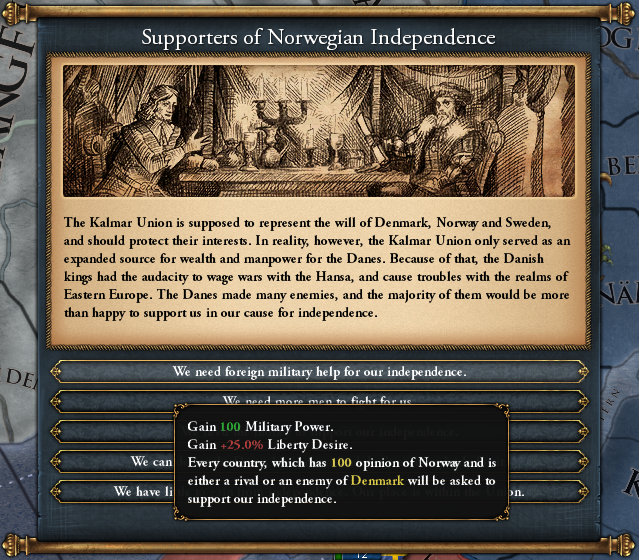 Note: Although you are asking Denmark’s rivals/enemies for support in the first three options, you still get a flat reward so the war against Denmark/Sweden will be easier to handle even if the rivals refuse to support you.

Choosing one of the the first three option will of course trigger an event for Denmark’s rivals: 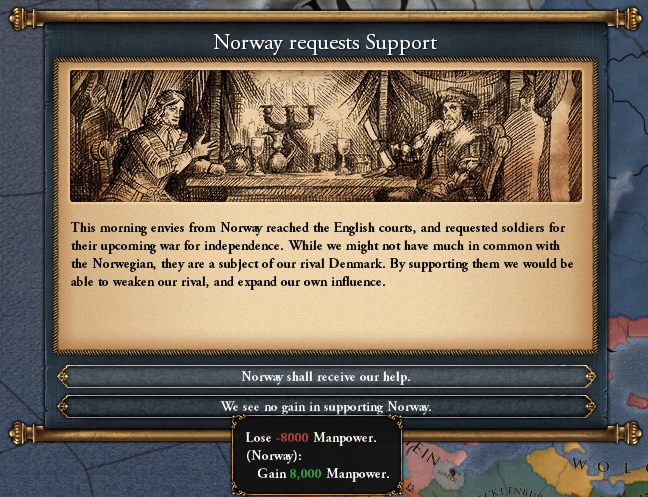 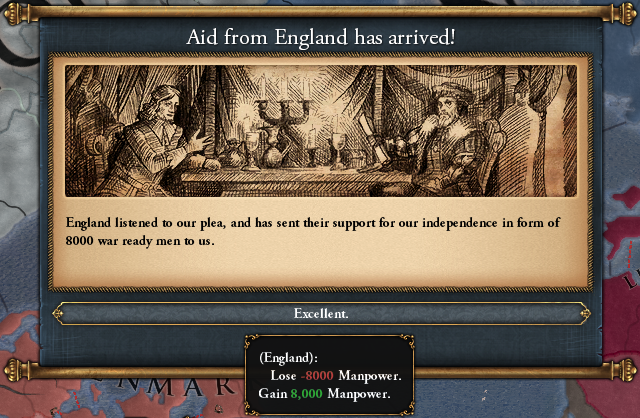 “Liberty for Norway!” will restore the stability loss and get you 30 Legitimacy while “Win Our Independence!” grants you a Restoration of Union cb against Denmark, allowing you to reverse the historical roles of Denmark and Sweden.

With the mission “Norway-Denmark” you no longer require an admin tech of 20 to form Scandinavia and you get the following event when you have Denmark as your personal union: 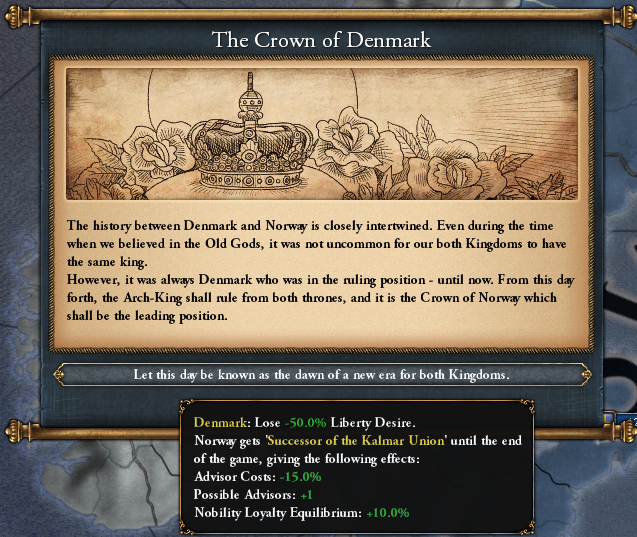 Note: It also makes you and Denmark historical friends too if you lose this status during the Restoration of Personal Union war.

While the main missions are all about reversing the flow of history and subjugating Denmark, there is also a reference to the Scottish Sinclar clan which swore loyalty to the Norwegian crown with the mission “The Claims of Orkney”. Completing it by conquering Scotland will fire this event: 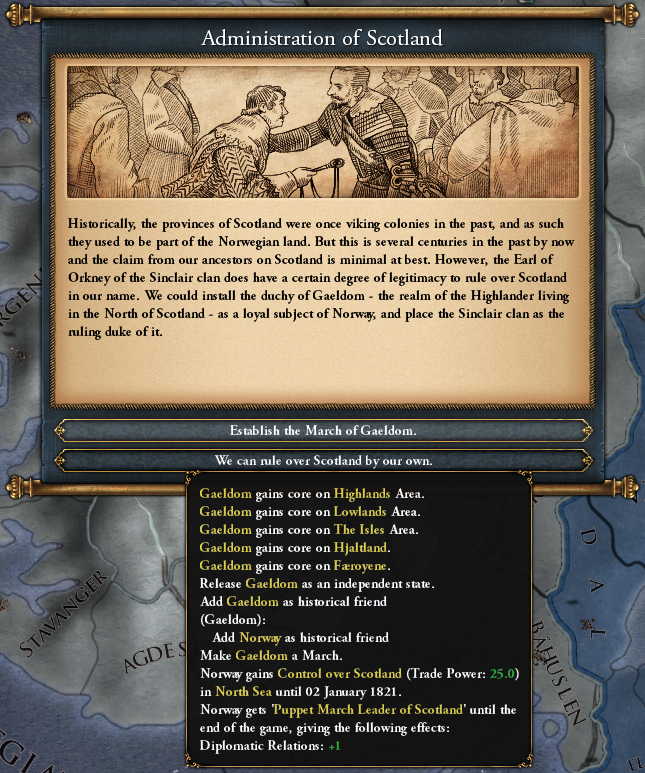 These were the conquest missions for Norway. The rest of the tree is focusing on flavor and colonization, though one of these missions is of particular importance forNorway: “Expel Danish Nobility”.

As you can see, Norway was especially badly affected by the Black Death and lost the majority of its Norwegian nobility and royalty to the plague. As such, it was easier for the Danish nobility to replace them after the Kalmar Union. This is represented by the two starting privileges of Norway which are designed to be mildly annoying to have: 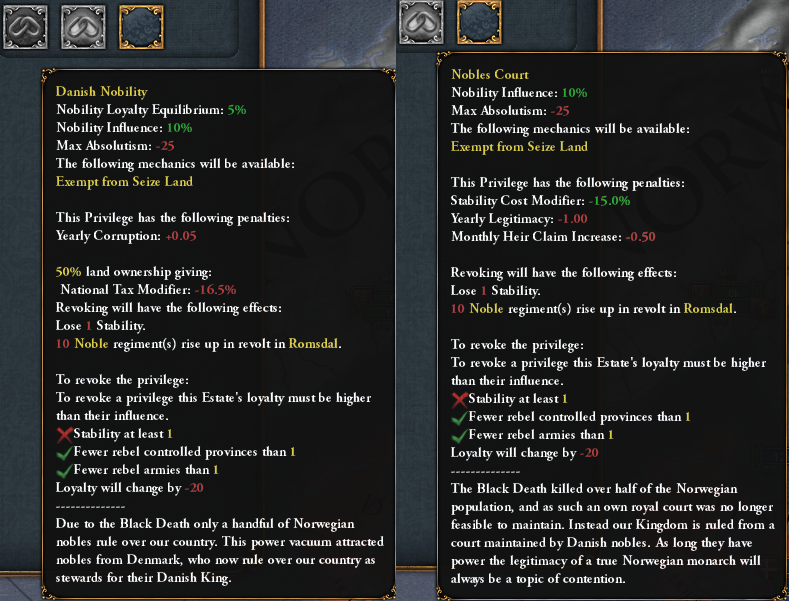 Note: while these privileges are active the Norwegian AI is more inclined to accept the Danish King as their monarch during the Kalmar Succession events.

While not really too harmful, these privileges prevent you from completing the mission “Norway-Denmark” and “An Absolute Kingdom”, the latter one being a mission which will give +20 Max Absolutism and -20% Autonomy Change Cooldown permanently.

Moving on to the colonial missions, although the Norwegian ideas “The Call of our Forefathers” and “Pioneer Spirits” are not exactly accurate at capturing the spirit of Norway during the 15th century and onwards, but they at least enabled a unique play style for Norway where they are “Budget Britain”. As Sweden is busy with the affairs of Europe mostly and Denmark is focusing on trade in the Old World, it was only fitting for Norway to be more about the colonization of the New World.

The mission “Colonial Ambitions” will give you a head start on exploration as it will fire the following event for you: 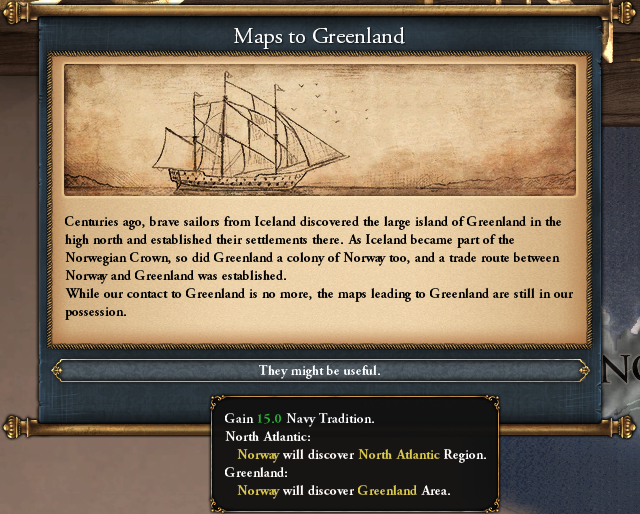 Speaking of Greenland, the mission “The Colony of Greenland” will require you to send troops to Greenland in order to see what happened to the former viking colony. Historically, the last written record of the Nordic Greenlanders documents a marriage in 1408. After that there was no contact with the people living there anymore.

By placing 3 regiments of infantry in either of Greenland provinces (under the assumption that they are uncolonized that is) you can complete the mission and get the following event: 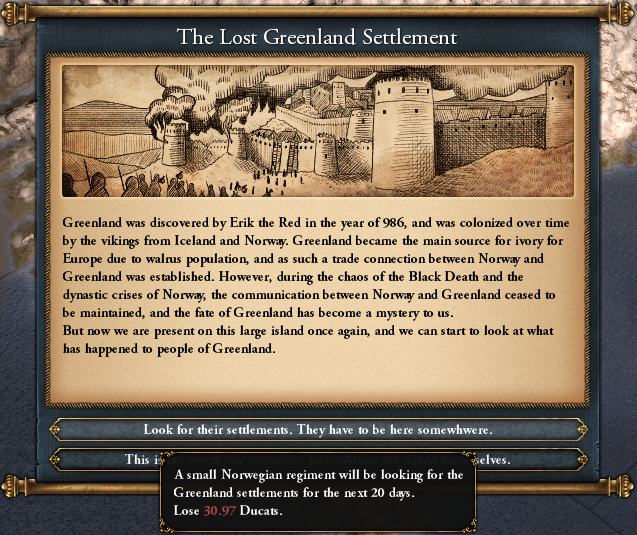 The second option is the safe option where you always get the Greenland colony while the first is a gamble. 90% of the time you will get the following event when you try to look for the lost settlement: 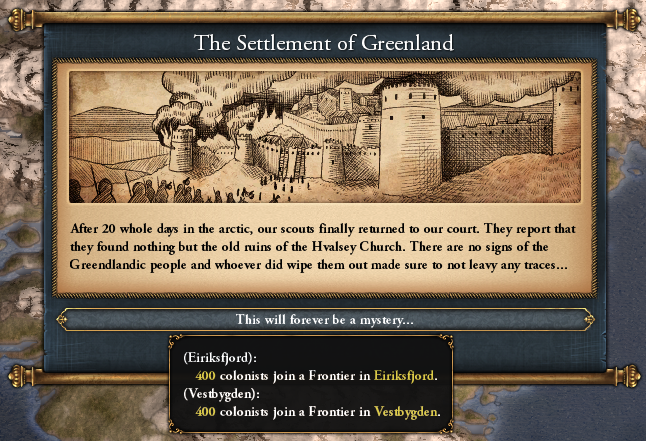 However, if you are lucky you get this event instead: 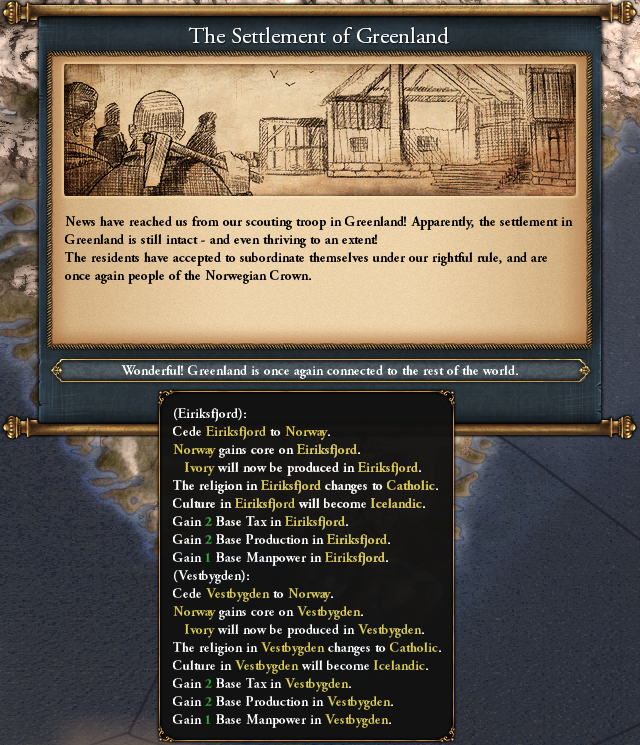 The rest of the colonial missions focus naturally on the colonization of North America as well as expanding a little bit into South America too. They are in general quite self-explanatory, though one mission is a little bit special. “Navigation Mastery” is actually not about colonization but about circumnavigating the world! 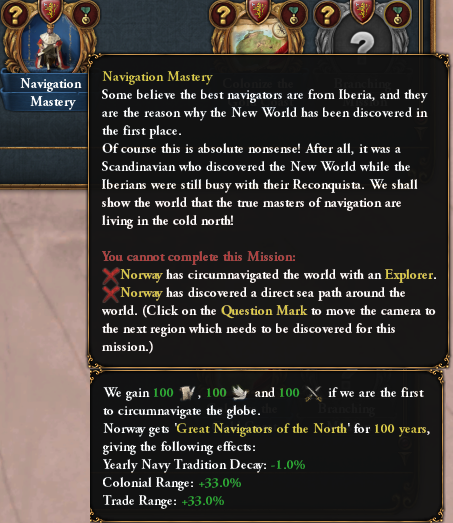 Now let’s take a closer look at the internal missions. There are three small branches of them: trade, development of Norway, and religion.

The trade missions on the most left side of the mission tree are about completing Burgher Agendas, construct markets and, of course, dominating the trade of the North Sea and Lübeck. Highlights here are the permanent +20% Loyalty Bonus for Burghers with the mission “Monopolize the North Sea” and the new Burgher Estate privilege “Mountain Expansion” from the mission “Please the Burghers”. 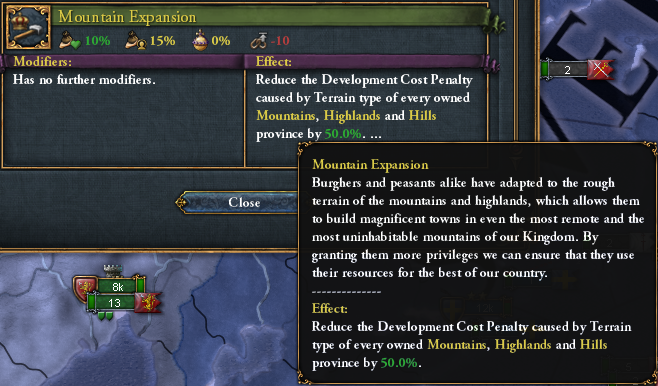 The religious missions are also branching missions for Norway just like it is the case for Sweden and Denmark. However, Norway is focusing more on expanding the Heddal Stave Church in Bratsberg and keeping a stable country.

The final branch I want to talk about is the one regarding developing Norway - which also contains two missions regarding the military identity of Norway. While Denmark uses mercenaries for their wars and Sweden has its Caroleans, it was only fair that we would also give some love to Norway too.

The mission “Restore the Leidang” is about re-establishing the medieval Leidang conscription. Although ahistorical, it is an interesting way to make the military of Norway distinguishable from Sweden and Denmark as this mission will unlock the following Nobility privilege: 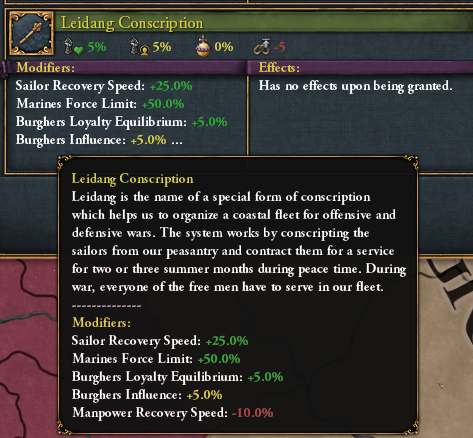 “Expand the Royal Navy” will further improve your naval and marine gameplay as it gives permanently -10% Shock Damage Received for your Marines, completely nullifying their drawback, and unlocking an upgraded version of your Naval Doctrine too. 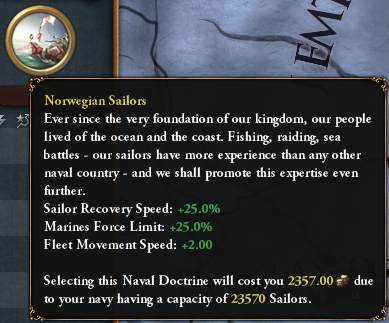 Note: Numbers and modifiers are still work in progress.

The other missions of the branch are more about actually developing Norway. “Restore the Infrastructure” will request you to develop Trondelag, Ostlandet and Vestlandet so that every owned province in these areas has 10 development. As a reward you get the following event: 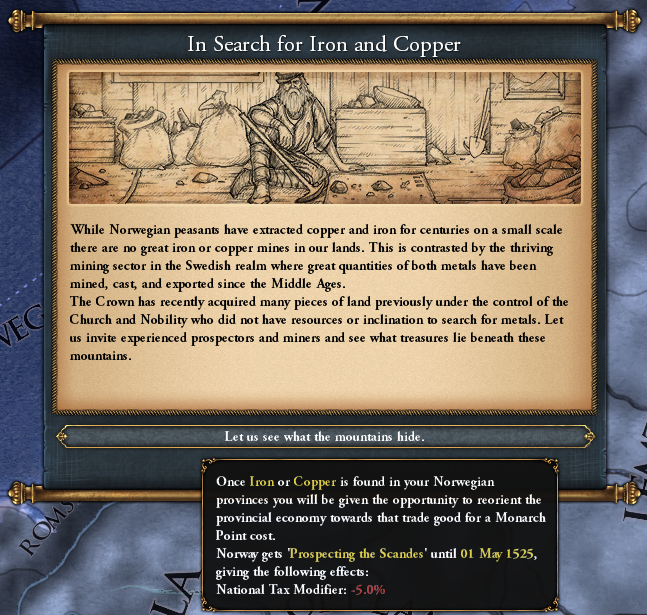 Note: This event is one of the flavor events Norway already has. However, now you can trigger it on your own and don’t have to wait for it.

Over the duration of this modifier you get the chance to get the following events if you own the necessary provinces: 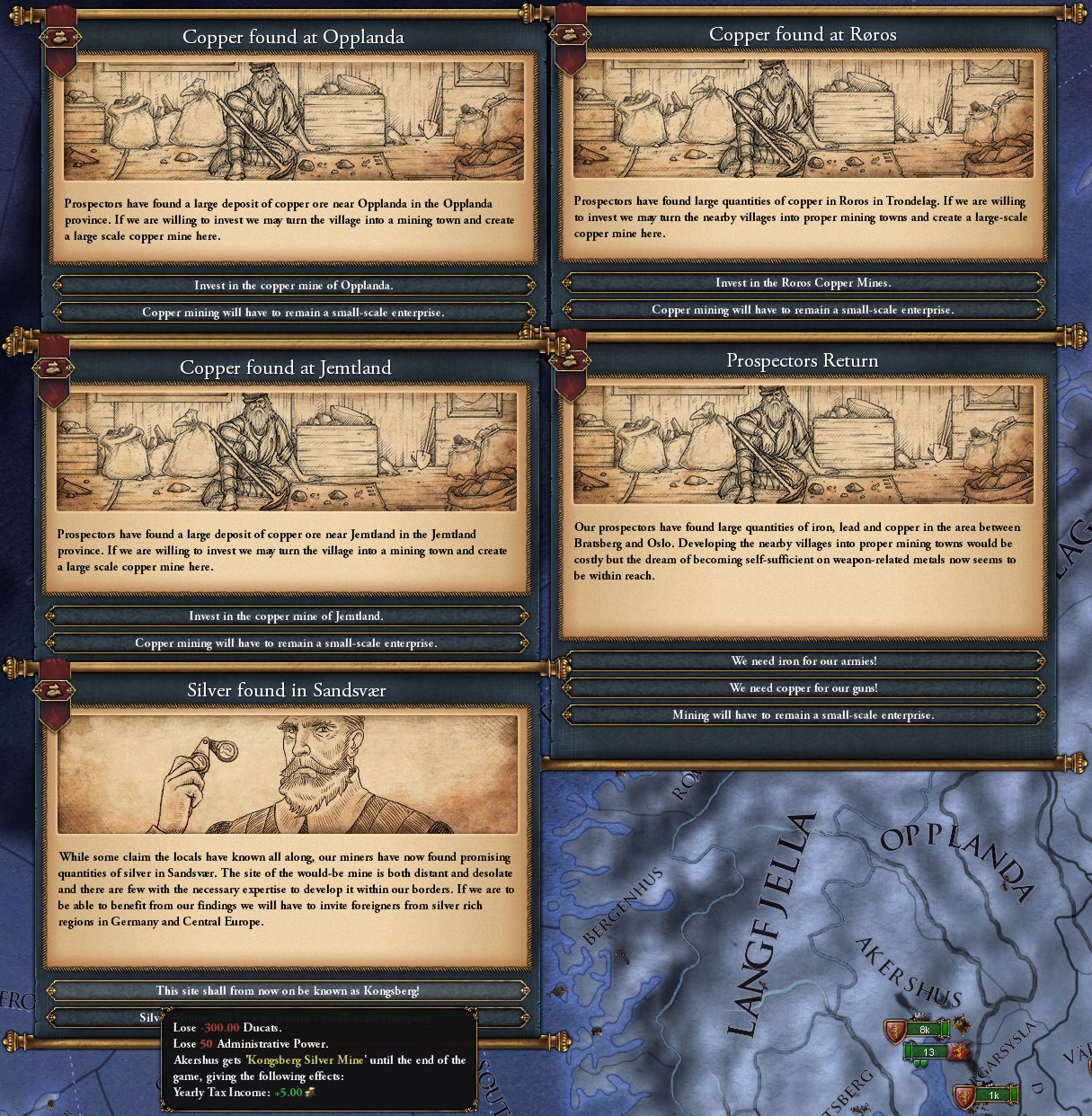 Note: we have decided to not touch the Vanilla Silver event. We might consider making this province into a gold province or not - depending on your feedback.

Finally, the mission “Norwegian Great Power” requires you to be one of the great powers with at least 600 development and gives the following rewards: 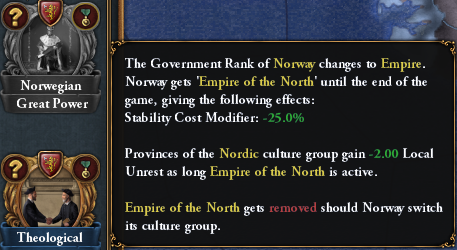 And that was it for the content for Norway. Before we continue with the additions to the free update, let’s talk about the Caroleans. The last Development Diary has showcased the Caroleans and we have received a lot of constructive feedback from you.

We are still not finished with the balancing of the Caroleans, but I want to share our progress with you so far so we can get an idea if we are moving into a direction the community likes to see or not.

First thing, the Allotment System government reform has been rebalanced so that it reduces your force limit. 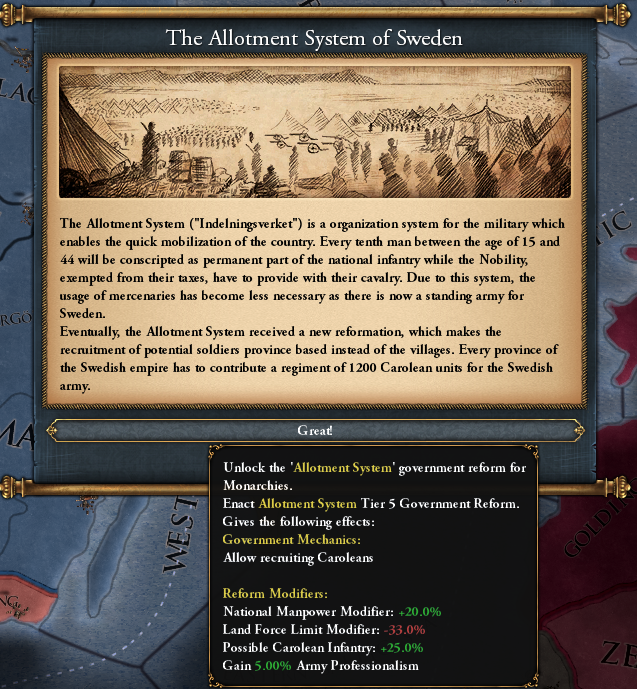 The units themselves have received a nerf. They now deal +10% Shock Damage and have -15% Morale Damage Received instead. 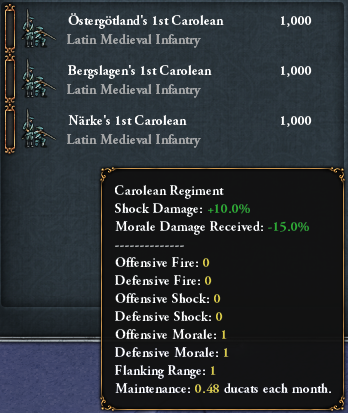 Note: Background of the unit is still work in progress. We need to find the right tone of blue so it is distinguishable from Rajputs, Marines and Cawa units.

And finally the privilege “Carolean March” increases the discipline of Caroleans by 5% instead of 10%.

Now let us take a look at the changes for the government reforms, which are part of the free update.

We have been working on revamping the government reforms available to the player and for today I want to showcase what we have so far for monarchies. Keep in mind: numbers and mechanics are still work in progress and what you see here is not final.

With that being said, I will go through every single tier and show the finished reforms of each tier: 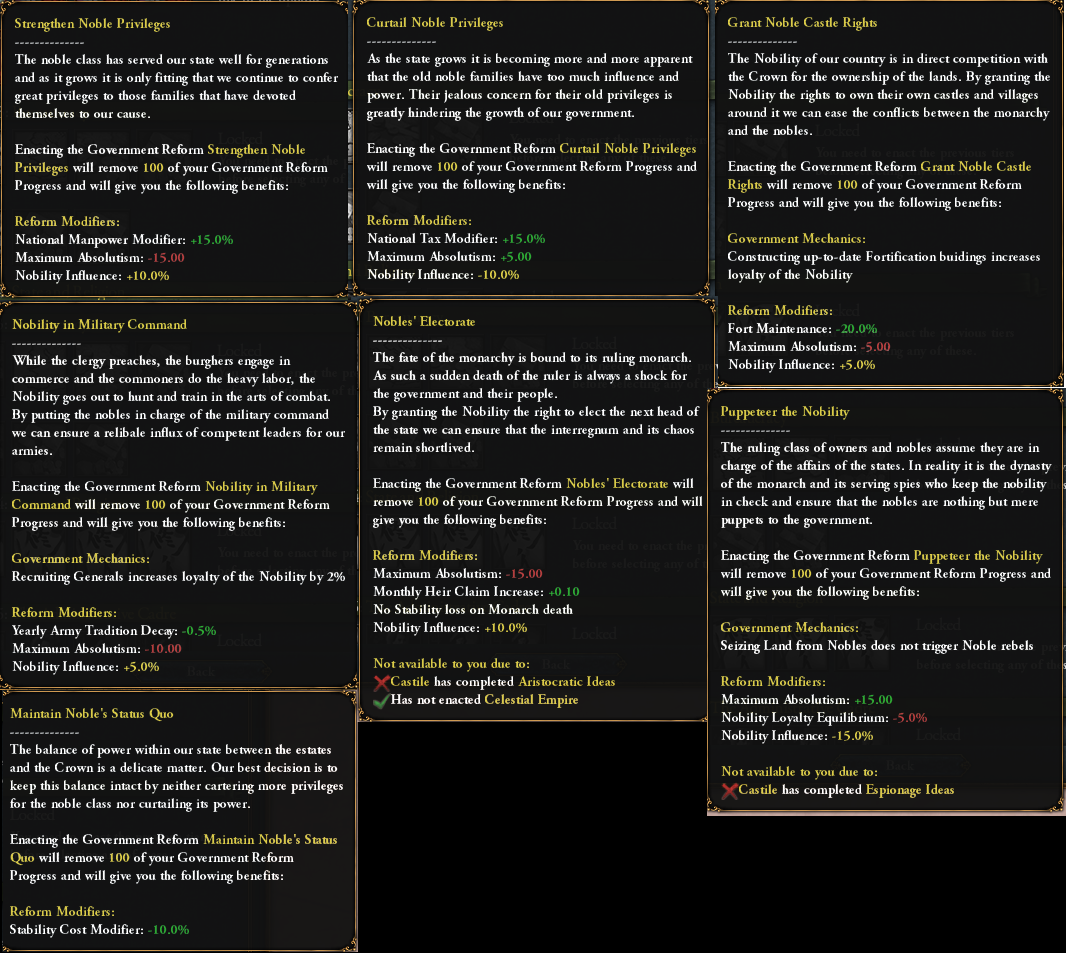 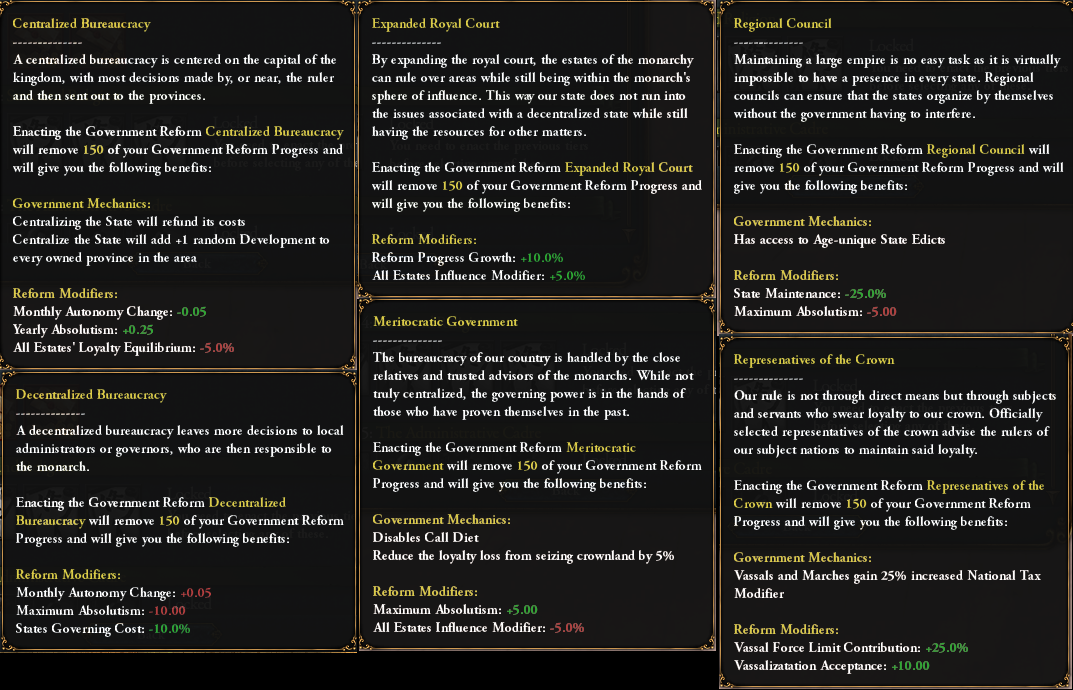 Note: From left to right, the reforms are available for Catholics (minus the Pope), Muslims, Hindus and Buddhists.

These are the remaining Tier 4 reforms:

Tier 5 (only one new reform, the rest are Vanilla) 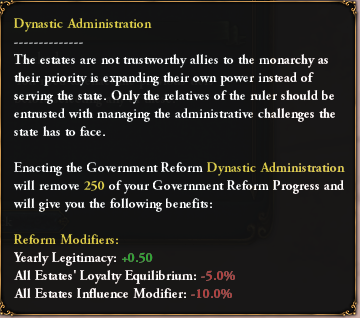 Tier 6 is at this point of time unchanged, but we will address these reforms and make them more interesting to select.

Tier 7 is another common tier shared with Republics and Theocracies and handles the Burghers and all the economical matters of your country. 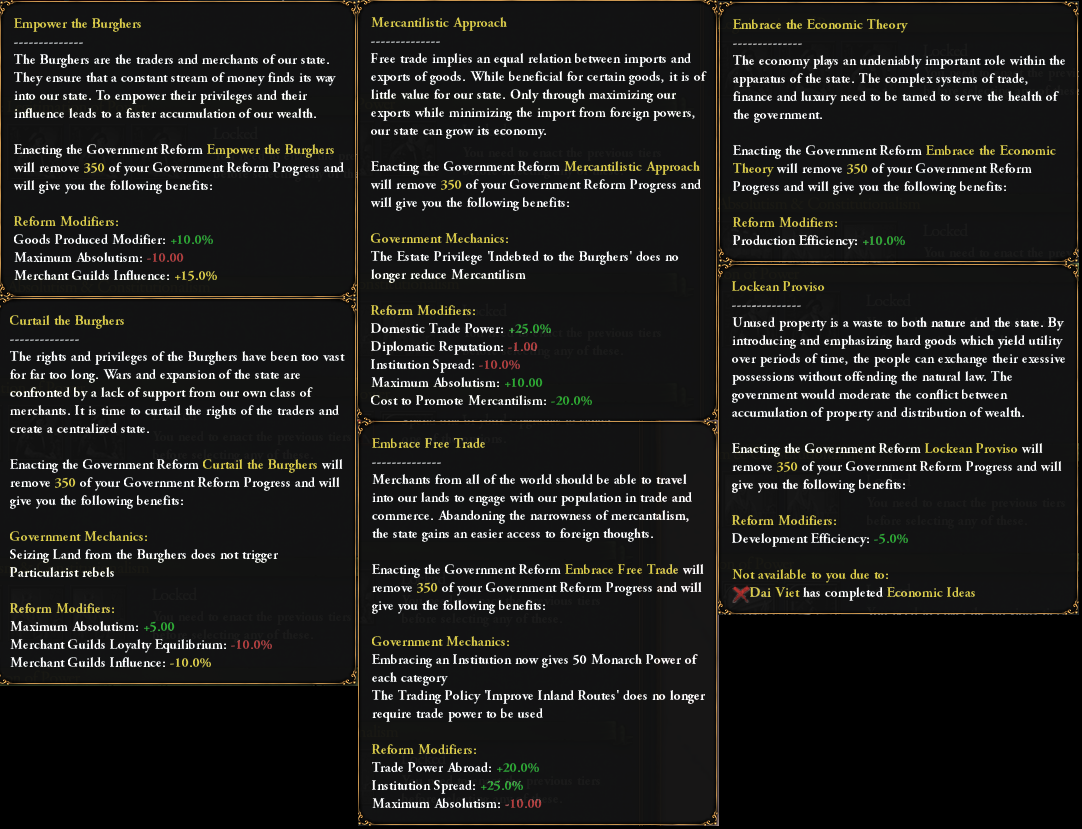 Tier 8, which is a completely new tier for Monarchies, and the reforms for Tier 9 are still work in progress, so they will have to wait for next week’s Development Diary.

That was it for this week! For next week we will finally get to know more about this one special tag: 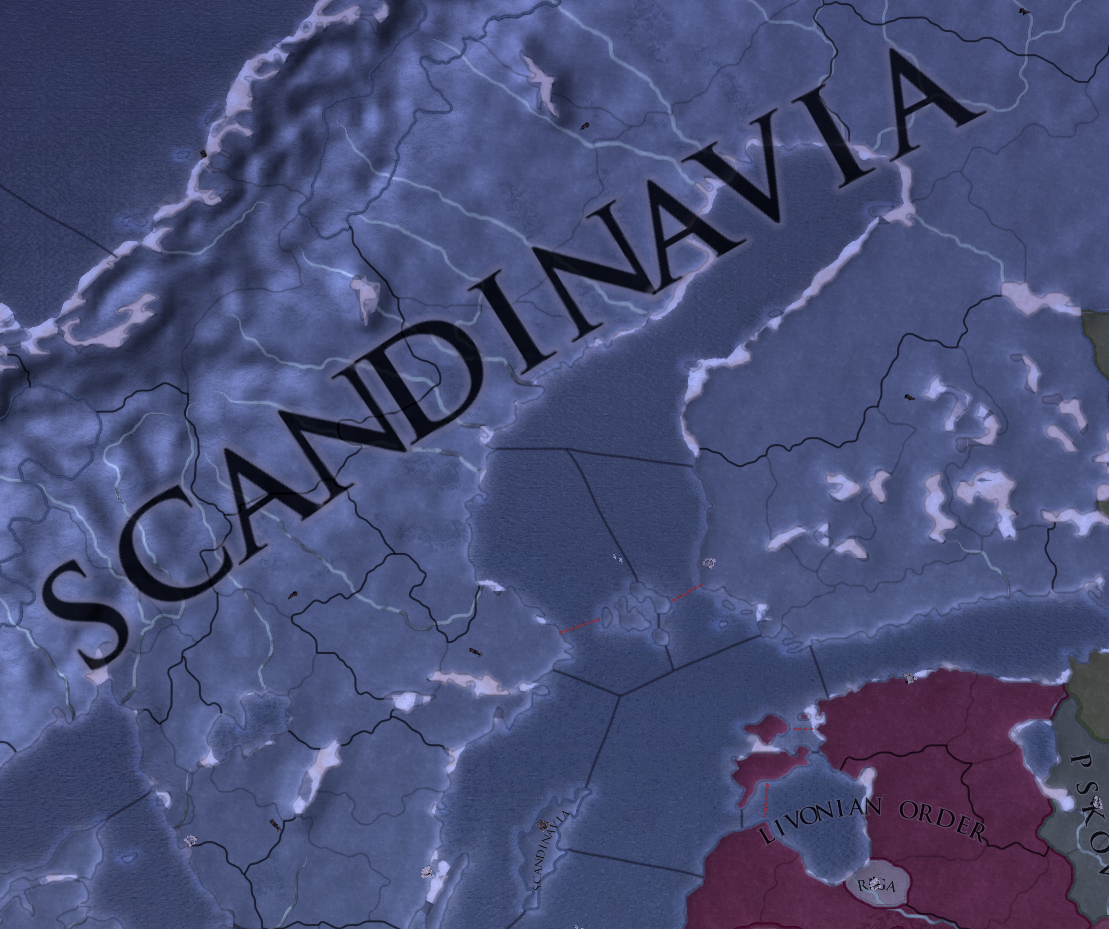 Until then I wish you all a nice week!
← More from Europa Universalis IV