We've got some more soloq champ tweaks and a few interesting system changes which should shake stuff up.

How's this patch look to y'all? 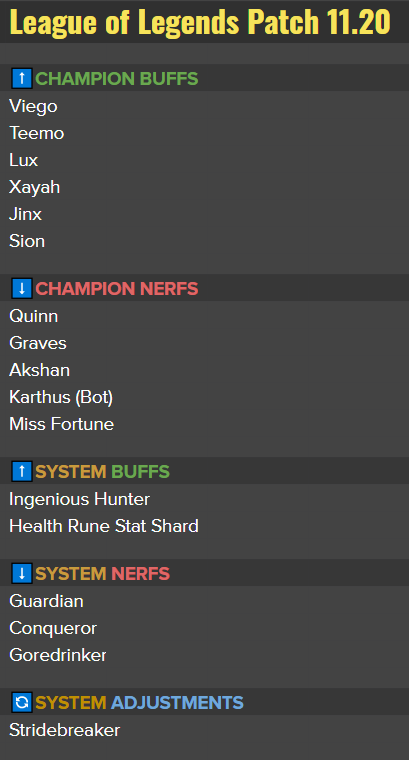 No Tryndamere nerfs. I sleep.

feels odd when there are clear and present alternatives... (that being said it's taken an entire damn year to even attempt item balance so we will take what we can get)

Do you have any plans to help kled out? 0 changes the whole season and all of his items (and now his keystone) have continually been nerfed

Kled tends to sit right on the edge of OP, esp with Titanic rush etc

damn it's unfortunate if this means he won't be getting any changes... as someone who's been pretty much one tricking him since he's been released I've been feeling hit so hard this season and he's never felt so bad to play to me personally. I don't think I'm going to be picking him after these changes on top of everything so it's sad to see it looks like it's going to be a long time before he gets checked

Right now the Titanic Hydra rush builds are strictly overpowered and really limit his options outside of that. Personally I'd like his interactions with bonus HP scaling to be fixed in exchange for power elsewhere.

What do you think feels off about him? Him being strong doesn't prevent work from being done.

Hey Phlox, is Sion really weak enough to warrant two patches of buffs in a row? Any idea why he is struggling?

Any plans on changes to Triforce?

I would ALSO like his hp interactions changed as well like you mentioned, the upsides to having it (stoneplate/titanic mainly) are far outweighed by the amount of %max hp damage you take because of both of his hp amounts being counted together by all the %max hp damage in the game that I mentioned in other reply, I would way rather lose all that and have his HP amounts treated as seperate amounts in exchange for other, less meta/item dependent things (personally have always wanted the 10/20/30% armor pen on ult rank like was added to pantheon over it)

I would even rather lose grievous on his Q completely in exchange for that and potentially a revert to his Q cd nerf early game since it swung so many top lane matchups that are heavily based on cds, his early game feels too weak for how poorly he scales into teamfights in my experience and you generally have to grievous wounds still anyway with the huge amount of healing in the game you can't afford to rely on your single target delayed skillshot grievous and need chempunk a lot of the times regardless

Thanks for your feedback man! I can't guarantee anything but I personally do think we can do some stuff to help out Kled

← More from League of Legends