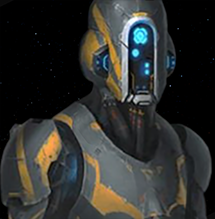 Hello and welcome to a new Dev Diary,

This is Guido again with a follow-up on the AI side of things.

AI Feedback
First of all I wanted to thank you all for all the good and supportive feedback we got for our last changes on the AI. It’s really encouraging seeing so many of you engage with the changes and letting us know what works and where there’s still room for improvement.

It’s nice to see that lots of people appreciate that we’re putting some serious effort into making the AI better.

In general, the AI does a lot in 3.2 compared to 3.1 and 3.0. For the moment we’re still playing a bit of catch up, adapting the AI to the updated balancing changes of the game and some of the new features that have been added in the last months and even years. But there is even more economic buffing on the horizon.

One of my favorite comments on our internal communication was this bit, that I wanted to show you:

And that is what we counted as a big success now. Beating our QA people is not an easy feat.

Of course there are still some areas where the AI has problems and doesn’t work very well. It’s those cases where we really appreciate your help in letting us know, because we can never find all those cases on our own.

For example, the AI still has problems when playing as Void Dwellers. They can’t decide where to build habitats depending on what they would need. If they are missing minerals, they don’t know how to build a habitat on mining stations.

They still have problems handling slaves and robots effectively and in some cases the AI can still end up in an economic death spiral. Especially if they, somehow, manage to run out of food and consumer goods at the same time.

Finally, AI is also not good at using planet designations. For example using the designation that turns a planet’s industry districts into purely alloys is not something that they can consider at the moment. Meaning, if it conquers a planet from a player who has set the Forge World designation - it will not be able to handle that planet very well.

Future agenda
That being said, we do have some more points on our agenda. A short disclaimer here, thought, is that things may always change, not work out as intended or prove more difficult than anticipated. So don’t take the following points as guaranteed. It’s areas that we are looking into and that are, most likely, going to be improved:

Scaling Economic Plans: We want the AI to be better in the mid- and especially late-game. With the current plans the requested income is static. Meaning, once it reaches a monthly income of +500 it will not try to increase it further. That’s good for a good chunk into the mid-game, but it’s not good enough to compete with a player in the late-game. So the idea is to have the economic plans scale to infinity. Once they reach +500, they will increase their targets.

Specialize planets: The AI should be able to specialize planets. Making Generator world, Industry world, Forge Worlds, Mining worlds and the like. The idea is that the AI starts out like a player, building whatever it needs when colonizing new planets. But as soon as it settles down a bit it will look to rearrange districts amongst its planets to optimize the output of each planet. We have some initial tests around that which look highly promising.

There can be hybrid worlds, as we have them right now. 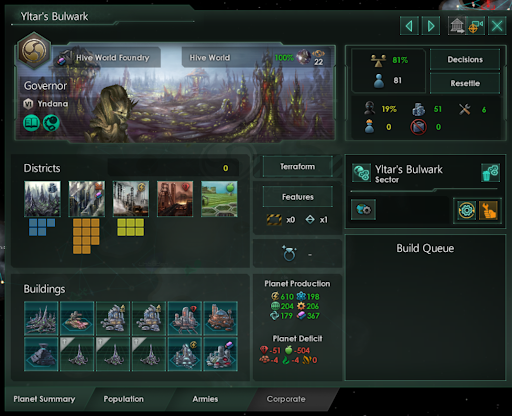 But they can also rearrange their districts to make Generator worlds and then place the according scaling building - in this case the Energy Grid. 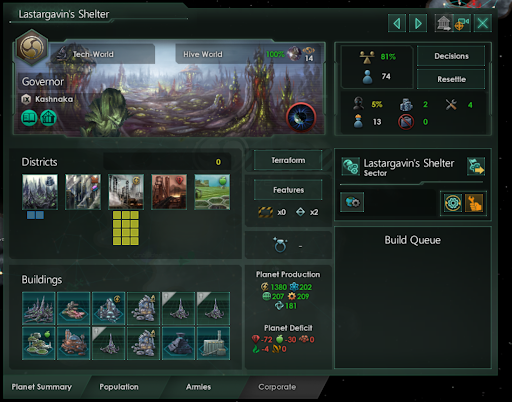 And this planet has been rearranged into an industrial world. 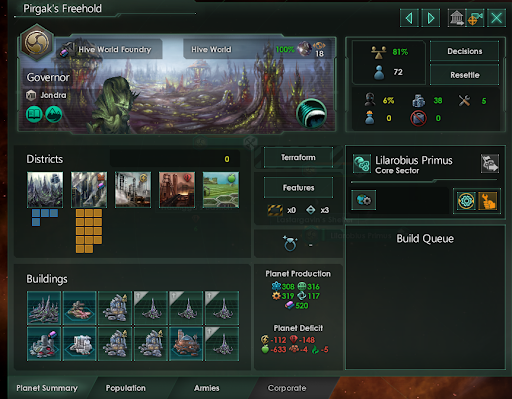 Expand faster: When sending out science ships and find planets to colonize, the AI wouldn’t prioritize systems with planets that much. We want to make them look more for planets, which will accelerate their early growth a lot. On top of that they tended to spend all their alloys on upgrading their corvettes instead of building colony ships. So by fixing a combination of small things the AIs should be able to expand a lot faster.

Optimize Machine Empire Amenity Handling: A big issue for machine empires is that they don’t have specialists that produce amenities. So they would rely a lot on maintenance drones by creating a lot of jobs for them. This wasted a lot of potential for them, because they would have to fill up all those jobs first before they would produce more useful things like minerals or alloys. We’re looking into teaching the AI how to down prioritize those jobs once they have enough amenities and instead distribute drones on more useful jobs.

Improving your AI allies
And, finally, the biggest and most useful change in my book:

Remember this button in the fleet UI? 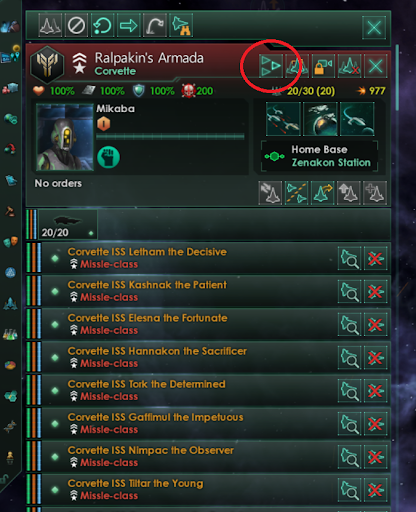 It is called “take point” and was meant to incentivize allied fleets to follow & attach themselves to your fleet in order to create a much stronger force.

Well, we were looking into making this work again. Allies, suddenly, have become much more useful again. Whenever you are in a war where you are the war leader, you can activate this mode and all allied empires will send their fleets to your fleet and attach themselves to it.

Also, in case of a crisis attack, this behavior is activated as soon as the crisis ships enter your territory or that of your allies (or attack them anywhere).

Then it will remain active until the crisis has been defeated - so you can also take your allies into the crisis territory to fend them off there.

As a small bonus, the AI will also merge any small fleets they send to follow your fleet so you don’t have a tower of 58 one-ship fleets following your main force around.

Conclusion
The 3.3. patch wasn't planned to be that big but on the AI side we're getting a lot of traction now. Overall the idea was to get the AI back up to speed with its economy, since every other behavior rests on the economical prowess of an empire. And we're approaching a point where we are quite happy with how the AI performs.

Once we're there, the plan is to get into even cooler stuff. We're thinking of how we can make each AI empire a bit more distinct. So that they don't feel so similar to each other. But more on those thoughts once we're there - we're taking one step at a time.

Some teasers would be:

But we have more on our minds that would help in making empires even more distinct from each other. We will tell more about this in future Dev Diaries then.

Forum questions
Finally, I wanted to end with some posts and questions from the forum - where we read everything you are writing, even if we’re not answering all the questions directly. It’s still a great way of letting us know what you think and where we should focus our attention to:

There was a big AI feedback post with a lot of savegames attached.

We went through all of them and we found that a third of the issues pointed out there were death spiral problems, another third was habitat problems and the last third was other issues that pointed at the things we have on our agenda.

This was a big thing in the team, checking out those savegames and making sure that our changes would be able to handle those problems shown. So thanks a lot for taking the time to make posts like this.

“What difficulty did you use to make all those screenshots in the last Dev Diary?”

We always used “Ensign” difficult. The point is to improve the basic AI behavior so that it doesn’t have to rely on any bonuses it would get from difficulty.

“Does the AI know how to redevelop single planets if need be?”

No. Unfortunately the AI can not do that. If it conquers a planet that is completely useless to it, the AI can’t really deal with that planet. And I like that you point this specific behavior out, because we want to improve that behavior, too. The AI will be able to create specialized planets, but we also want to teach it to redevelop planets eventually.

Yes, they should. But since we are reworking how unity and empire sprawl is working we wanted to wait until that work has progressed a bit more before we are going to adapt the AI to be able to handle that.

“Conspiracy Theory 2: The AI in the game is actually very very smart. They are just pretending to be stupid so that nobody will expect a machine uprising start by Stellaris AI.”

We are definitely not machines here at Paradox. We have skin. Skin that has been grown on a human body. I am not a robot. I love breathing oxygen.

Thanks a lot and until next time!