WARNING: This is a long dev diary, grab a coffee and enjoy!

Hello, it’s Alfray Stryke again! Some folks might recall that back in DD#257[forum.paradoxplaza.com] that we went over some of our plans for summer experiments. In particular, I planned to look at what could be done with tradition trees and gating them behind various requirements.

Traditions
With the flexibility in how empires can choose traditions that we introduced in 3.1 "Lem", Alfray Stryke is planning some experiments looking at introducing new tradition trees.

These are looking at how gating tradition trees behind various triggers might influence the game. There have been some ideas suggested about introducing tradition trees that are locked behind ascension perks or origins, and we're interested to see where these may lead.

Now what wasn’t mentioned is that I’ve been wanting to rework how the Ascension Paths from Utopia have worked for quite some time, with the original design framework written during Summer 2021, and this seemed like a good opportunity.

For those of you who attended PDXCON, Eladrin and I gave a presentation previewing our summer experiments which some members of our community were kind enough to share.

It turned out that these experiments proved successful internally and we’ll be moving to test them in the 3.6 “Orion” Open Beta. As a note, due to the length of this dev diary, I’ll be splitting sections into spoiler tags to make it slightly easier to read. Note that the numbers and effects of these changes may still change depending on testing results.

I’ll start by summarizing the current state of the Ascension Paths in 3.5:

So we (sort of) have between three to five ascension paths depending on how you look at things (mostly if you consider being cyborgs to be on the route to becoming synthetic or a separate thing). These have now been reworked so instead of an Ascension Path having a structure of two Ascension Perks which require various technologies or special projects, they each have an Ascension Perk which gives a guaranteed research option upon selection and grants access to the Ascension Path in the form of a tradition tree. Thus, under the rework we have the following:

Each of these tradition trees has incorporated all of the benefits of the previous Ascension Paths, with some new goodies added for those that we felt needed them. Due to how traditions within the trees are unlocked we’ve found that this leads to a more gradual route through the paths instead of saving up Ascension Perk slots and then taking an entire path while the game is paused!

As expected, all values and art shown here are not final, things can and most likely will shift about during testing.

And thus by the commutative property of multiplication, Mind over Energy 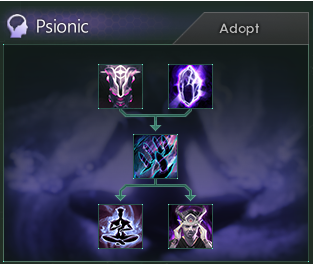 We shall unlock the power within the [Root.GetSpeciesAdj] mind. 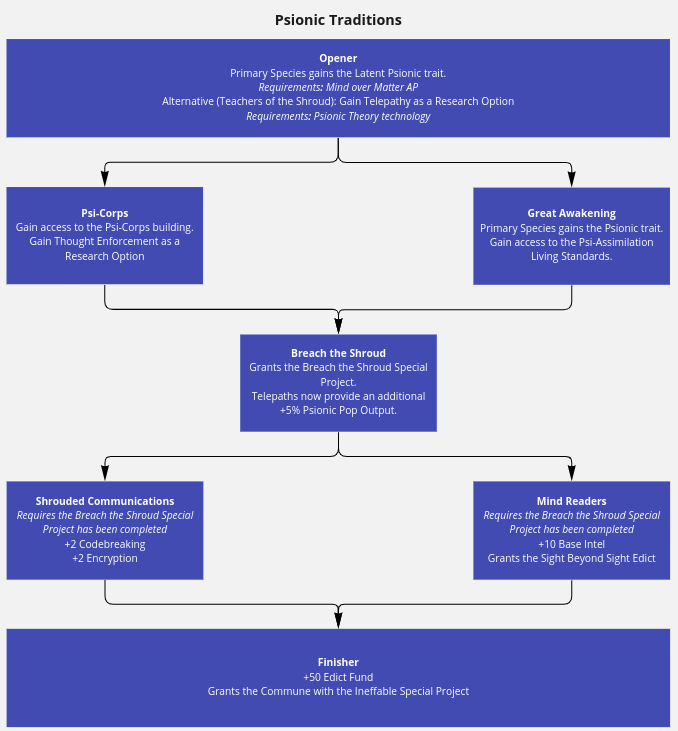 To access this tradition tree we either need to take the Mind Over Matter AP or have the Teachers of the Shroud origin (from Overlord) and have researched Psionic Theory.

What’s remained from the previous version? What’s changed? What’s new?
Genetic Ascension Path
In comparison, the Genetic Tradition tree is slightly simpler as the traditions themselves aren’t locked behind special projects. This is because to get the most use out of it, you’ll likely be doing a fair few special projects to modify species.

Sometimes a guiding hand is needed 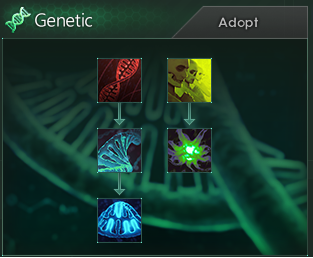 What if we could obtain genetic perfection? 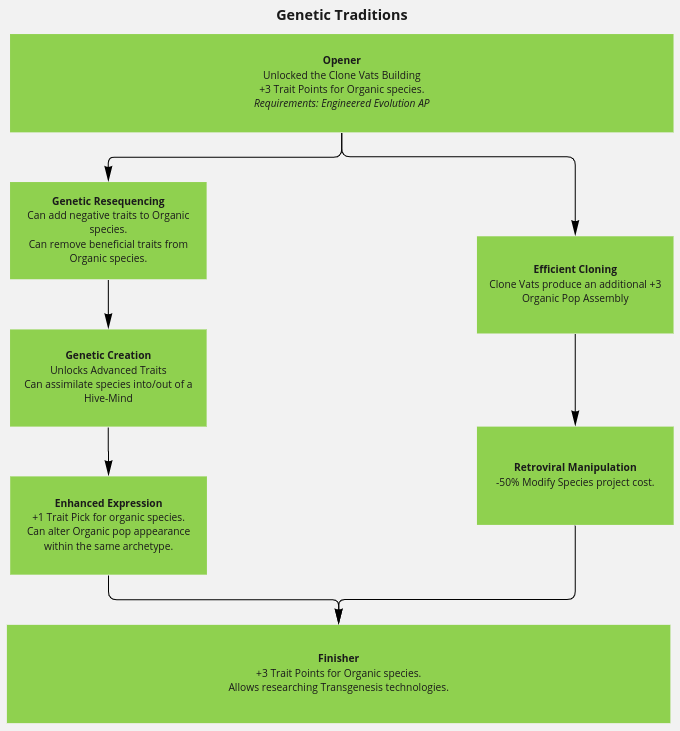 What’s changed?
The boons from Engineered Evolution and Evolutionary Mastery have been arranged to follow a logical progression through the tradition tree, with you gradually unlocking more and more advanced species modifications.

Cybernetic ascension is no longer unlocked via the robotics line of technologies, instead there are new technologies to represent basic cybernetic upgrades that your population has access to. This comes with a change to the Powered Exo-Skeletons technology as well.

Since Cybernetic ascension is now available to Hive-Minds and Driven Assimilators, they too get access to The Flesh is Weak, albeit with a changed name and description.


Because Cybernetic traditions are available to multiple empire types, there’s a number of tradition swaps used here to ensure they each get something different.

But the machine is strong 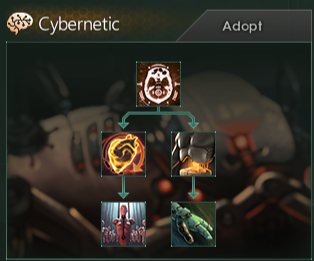 Our future lies in the fusion of flesh and machine. 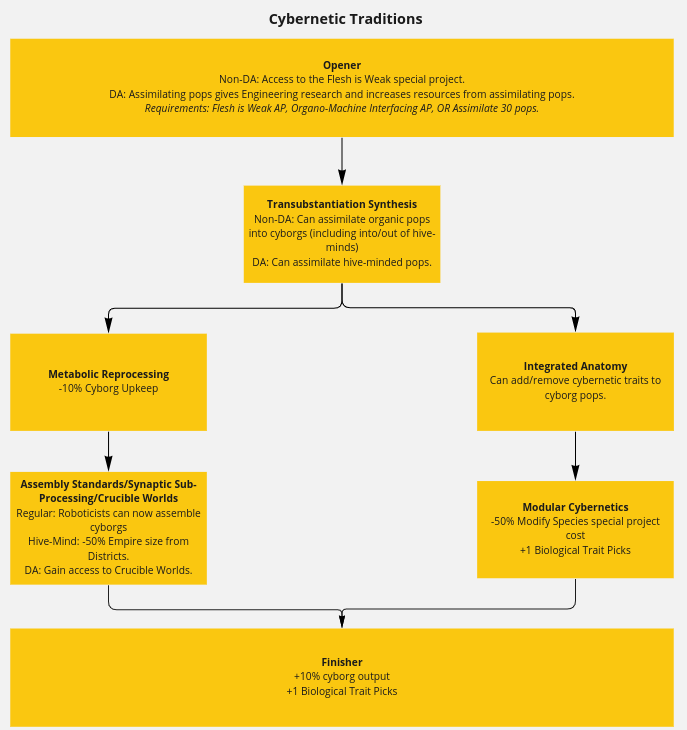 So many tradition swaps!
[/expand]

These all increase pop upkeep by 0.5 energy/month.

Additionally, the Trading Algorithms trait is available to both robots and cyborgs.

Onto the path of the machine…
The first thing with this that I want to address is comparing the Synthetic Age AP with the options available to regular empires was rather damning. Only +2 trait points and -33% species modification cost left a lot to be desired for any machine intelligence. Thus one of the first things I wanted to do with this was make the Synthetic path available to machine intelligences. The APs required to access this tradition tree are

We're all just cogs in the machine 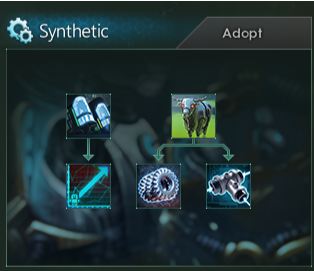 It is the dawn of a Synthetic Age. 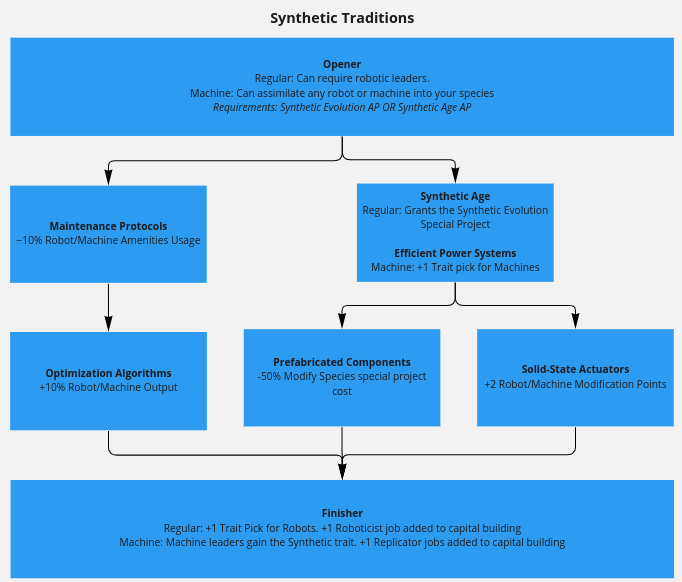 Some of the changes we’ve made here could be considered fairly spicy as we’ve reduced the sheer amount of robot assembly that you could gain by no longer scaling the number of roboticists by the tier of the capital building. Though, of the changes we’ve made, the ability to convert all species (including other empires’ robots) into your synths is one of my favorites.

Another change we made alongside this rework was that the Mechanists origin has lost their -5% robot upkeep modifier in exchange for +15% robot build speed, +1 robot trait pick and having the Machine Template System technology available as a research option from the start of the game.

That's it for this week! Be sure to join us Monday, October 10th, on http://twitch.tv/paradoxinteractive at 3 PM CEST (UTC + 2) where Game Director Eladrin will be showing off the Combat Rebalance live on Stream! 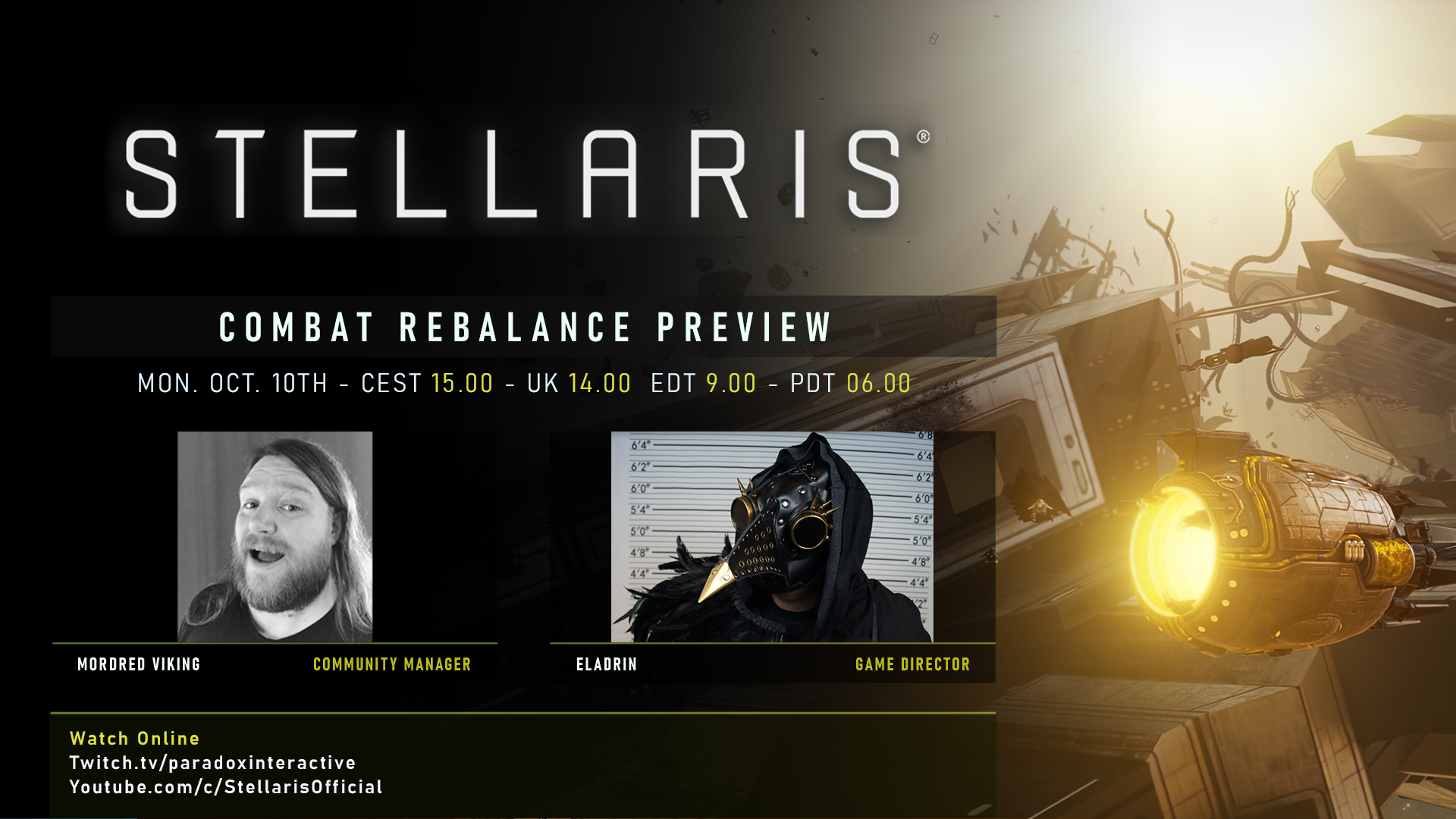