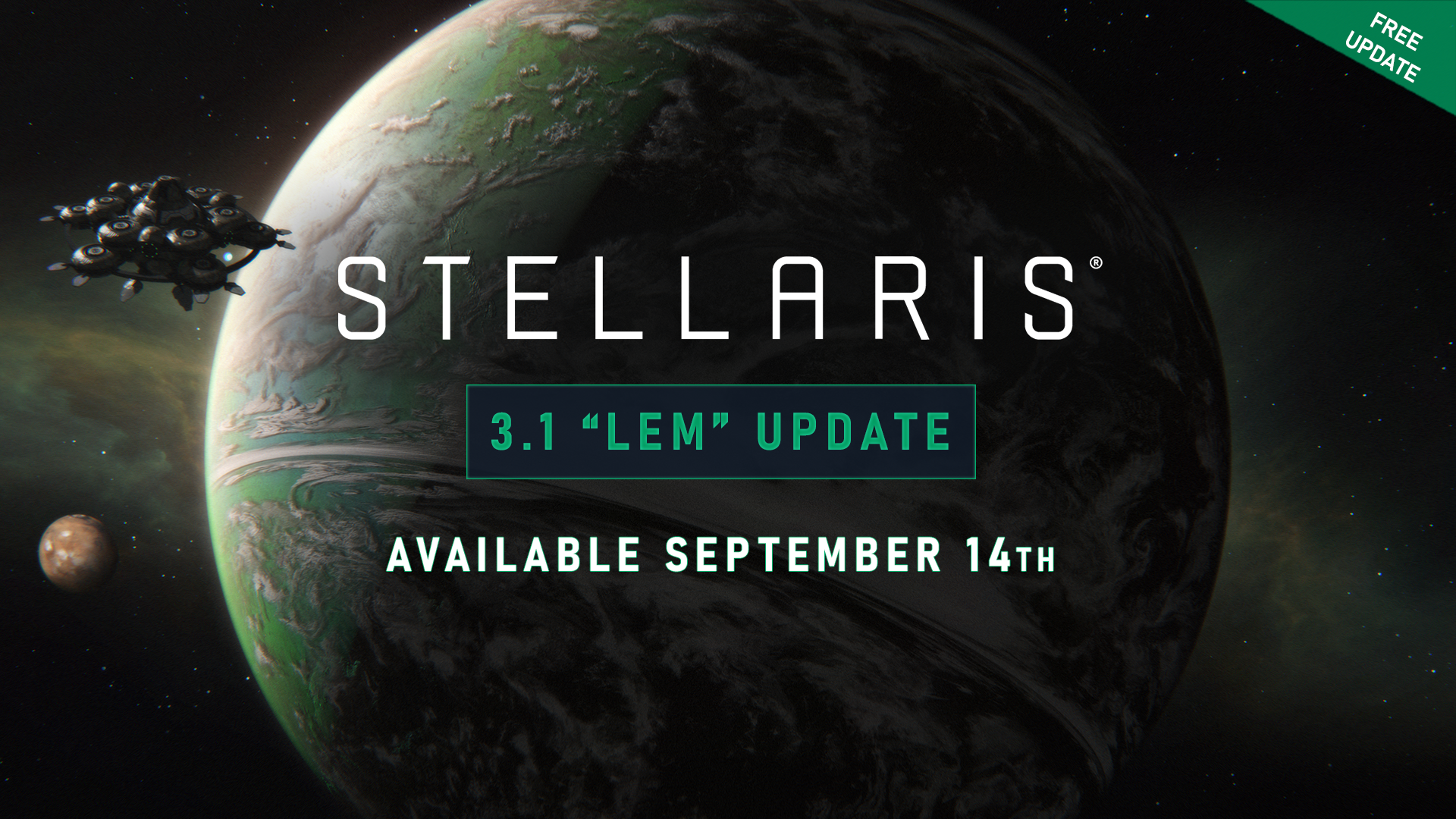 The Stellaris team is proud to announce the free Lem Update, honoring the 100th year anniversary of Sci-Fi author Stanisław Lem, will be released on September 14th!

The Custodians Initiative The update marks the first free update of Stellaris from our Custodian Development Team. This new group of developers was created with the mandate of updating and maintaining the amazing content that has been added to Stellaris over the years, as well as crushing bugs, adding content to existing DLC, as well as improvements to Quality of Life, Performance, UI and AI. The Custodians Team operates in parallel with the “Expansion Team”, which will continue to develop new content for Stellaris.

With the Custodians initiative’s added resources, we hope to be able to increase the frequency of our free patches, and by extension the overall quality of the game.

For the Lem Update, in addition to bug fixes and AI improvements, the Custodians have focused on adding additional content to previously released DLC, as well as updating Traditions, a system that was added to Stellaris in the 1.5 “Banks” version.

Selectable Traditions In addition to the eight Tradition Trees that are in the current version, we have added three new Tradition Trees: Mercantile (free), Unyielding (requires Apocalypse), and Subterfuge (Requires Nemesis). The existing Tradition Trees have had a balance pass as well.

In the Lem Update and with all the DLC, there are now up to eleven total Tradition Trees, with each empire only being able to pick and unlock up to seven Tradition Trees. Some Tradition Trees also now unlock further abilities, such as Mercantile and Trade Doctrines, similar to Supremacy and the Supremacist diplomatic stance. This will add more variety and replayability to every playthrough.

Plantoids Changes The Plantoids Species Pack (Paid DLC) has also been refreshed in the Lem Update, Plantoid and Fungoid species will get three new species traits and two new civics. Plantoids will be able to reproduce by Budding, adding organic pop assembly by simply existing. Or they can choose to be either Phototropic - converting some of their food upkeep into energy - or Radiotrophic, and feast on concentrations of background radiation. In addition, empires can choose to take either the Catalytic Processing Civic - and convert food into alloys - or lead an Idyllic Bloom empire which can convert ideal worlds into organic paradises.

Humanoids Changes We also have revisited the Humanoids Species Pack (paid DLC) and added a new Origin, as well as two new civics to this species pack. Start as the lost remains of an ancient Clone Army, play as a species of Masterful Crafters whose artistry is appreciated throughout the galaxy, or have your species live a Decadent Lifestyle as continue to Seek Pleasure throughout the galaxy. These new origins and civics add many ways to tell your species’ story like never before.

Necroids Changes The Necroids Species Pack (Paid DLC) will also receive a significant overhaul in the Lem Update, with the Reanimated Armies Civic changing to the Reanimators Civic, which can lead to some interesting reanimation options. The Death Cult civic is getting an overhaul with increased bonuses due to the reduced pop growth in Stellaris 3.0, as well as some balance changes to the Necrophage Origin including the option to start as a Hivemind (requires Utopia). In the Lem Update, the Necroids Species Pack is unlocking its true potential.

Balance Changes In addition to the changes above, the Custodian Team has been hard at work, doing a balance pass on civics, you can dive into the details in the patch notes[pdxint.at]. In addition, the Shattered Ring Origin has been changed to work more like the Remnants Origin - you now start on a Shattered Ring segment, that you can upgrade to a Ringworld Segment when you have the Prerequisite Technologies. The Void Dwellers traits have also been changed so that the negatives from living on a planet can no longer be simply gene-modded away. For Quality of Life updates, when constructing an Ecumenopolis, it will now take into account the planetary designation of the planet, meaning that Factory Worlds will get more Factory Arcologies, and Foundry Worlds will get more Foundry Arcologies when the upgrade is complete. Additionally, Rogue Servitors can now build Ecumenopolis, and get a special district to house their bio-trophies.

For all the full list of additions, balance changes and bug fixes, you can read the Lem Update patch notes here[pdxint.at].

We hope you enjoy our latest additions to Stellaris for PC, and enjoy the free Lem Update on September 14th!
← More from Stellaris