Thank you for watching!

There will be a reduction in the batches of Railjack Resource Costs across the board required to yield Helminth Secretions.


The Digestive period of the Helminth specimen has undergone some study, and we have some changes to announce:

There will be a reduction in the batches of Railjack Resource Costs across the board required to yield Helminth Secretions.

To give players more options for the Bile Secretion, we are adding the following components as feedable to Helminth to create Bile:


Cheers, you can look forward to these changes with fu...

Talking this over with the team! Thanks for the post.

- Fixed an issue where using the ESC Menu function when inviting players to the Dojo during a trade causes a game lock.

- Fixed numerous issues with the Oscira skins not allowing the underlying weapons to use proper reloads and animations.

-Fixed an issue where pausing during extraction can lead to issues as reported here:

I've been waiting for Ember Prime and I thought it would be an age until I had to chance to get her! Thank you!

Yes, all things considered a lot of people are in this boat!

And yes this is the correct line of thinking.

Whoot, Hype it up!

The 'fire' in your name betrays your Ember bias!

As some of you have noticed, our Prime Vault rotation this round has gone on a little long. We had to put a lot of work into making Deimos a simultaneous release during COVID times, and that meant we had to divert focus and people away from some other items. Prime Vault was one of those items.

This means the next Prime Vault offering is a tried and true debut of Ember and Frost Prime (full details to come tomorrow). It also means that we are now in a position to make the Vault following Ember and Frost Prime offer new-to-Vault contents because we recognize how important this is.

Thank you for understanding!

- Disabled Ordis Transmissions while in the Helminth screen. Our trusty Cephalon must be shielded from this room.

- There is now an ‘Incomplete’ tab on the Helminth to show you which abilities you have not Subsumed.

- Increased the audible distance of Xaku’s weapon sounds in the Grasp of Lohk ability use.

- Numerous micro-optimizations for Deferred Rendering have been added to the game!

- Fixed ‘Botanist’ being missing from the Codex and unlinkable in Chat.

- Fixed an issue with the sound of casting Roar on a Warf...

This is so cute! 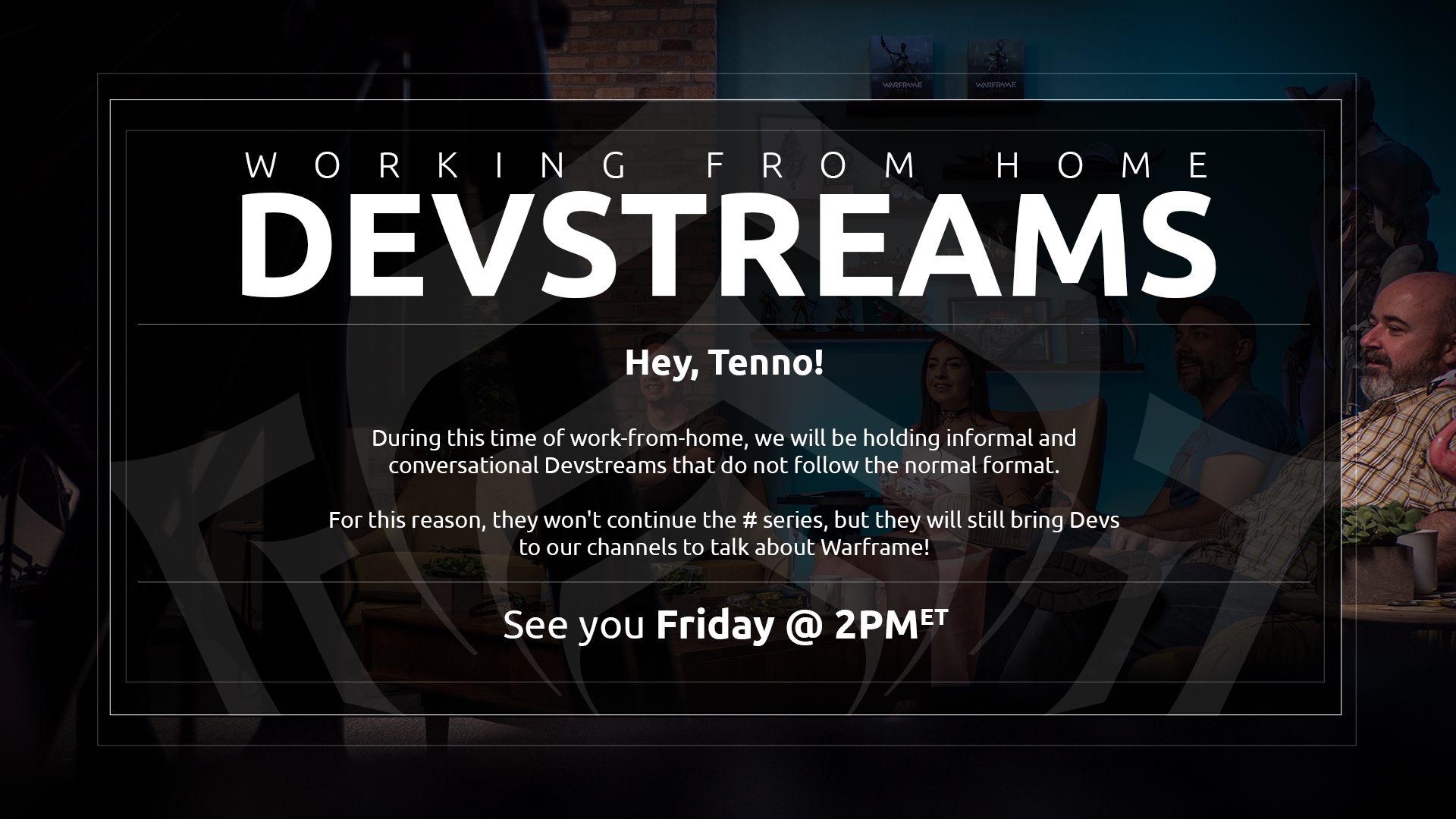 This Friday at 2 p.m ET - join some Devs and I to go over a jam packed home Devstream where hopefully nothing goes wrong with the computer! We’ve got lots to discuss – from the Glassmaker Finale to our second Mech in action! Don’t miss a deep dive into Helminth Stats, too! We are looking forward to seeing you there, Tenno!

See you at 2 p.m ET Friday, September 18th at twitch.tv/warframe
Or, if you're on Switch, check us out on Youtube: ...

We have a fix for this coming soon!

Sadly, we lost a member of our Digital Extremes family this month. We are all heartbroken by this loss.

Andrea was one of the first artists to work alongside the community to create and share our processes at Digital Extremes. In 2013, she invited players to review her work on the 'Tenno Sniper Rifle', known now as the Vectis. This was just the beginning – her journey continued with modelling and making the Warframe Arsenal a remarkable work of art. Her art will live on forever.

Since 2017 we have rallied toward September as a month where we invite you to show support for Leukemia & Lymphoma Awareness Month. This month has been one where employees of Digital Extremes and players alike show support and donate to charities that directly impact research and management of people and families affected by Leukemia & Lymphoma.

Today, we move into a new chapter. The Harmony Ribbon is now available permanently for players for free in...

Can you post screenshots of the process that is resulting in an error?

This is widespread and we are working on a fix!

She is back, sorry about that!

In a recent Hotfix you may have noticed:

Ranking up in the Entrati Syndicate will now require a maximum of 1 Entrati Token type per rank (i.e 1x Conservation + 1x Fishing). Anyone who has already ranked up will receive a refund script within the next few days.

This Script is now complete on all Platforms. If you ranked up with prior costs in place, you'll have a refund, this will be under-the-hood and just automatically added to your account.

In an attempt to keep these notes spoiler free you may notice some less-descriptive language than usual - thank you for your diligent reporting!

General note re: Scintillant! We discussed it yesterday, and realized the Scintillant description was too vague in terms of other methods to acquire it and updated its description in a Hotfix. Overnight, we ran stats and the amount collected was too low, which is widely accepted from the community to be the case. While we all start with baseline ‘0’ for new Updates, this Resource is an outlier in how slowly it’s being accrued, which is to say current pacing not our intention. They should feel like a revised Cetus Wisp, but when we compared the two overnight, and considering more people are playing Heart of Deimos and how many Scintillant are needed, they were lower to a degree that doesn’t make sense with their hookup. We are getting a fix and (along with general Son Token rebalance) in for this today.