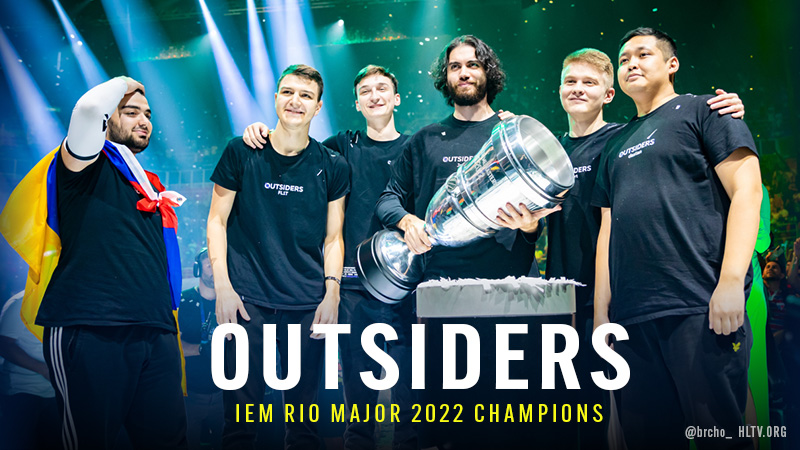 Over the past two weeks Rio de Janeiro has been the center of Counter-Strike, where 24 of the best teams in the world fought to become IEM Rio Major champions. In the end, only one team was left standing as Outsiders bested Heroic on Mirage and Overpass to secure their first Major championship!

A New Path to the Majors

Starting with the 2023 Paris Major, we’re going to change the way we invite teams to the RMRs.

Previously teams entered the RMRs by direct invitation, or through a series of open qualifiers. For Paris, some teams who aren’t directly invited will get to skip the open qualifiers–teams that consistently perform well in Valve and third-pa...

[RIO MAJOR]
– Rio 2022 Champions Autograph Capsules are now available for purchase. 50% of the proceeds go to the participating players and organizations.

[RIO 2022]
– Various adjustments to player and team stickers to improve visual read.
– Introducing two limited-time Rio 2022 Storage Units available for purchase:
–Rio 2022 Storage Unit with Stickers comes with 145 Paper stickers featuring every Paper player autograph and every Paper organization sticker from the Rio 2022 collection
–Rio 2022 Storage Unit with Glitter Stickers comes with 145 Glitter stickers featuring every Glitter player autograph and every Glitter organization sticker from the Rio 2022 collection
–You can move other items from your inventory into these Storage Units, or retrieve any items into your inventory. 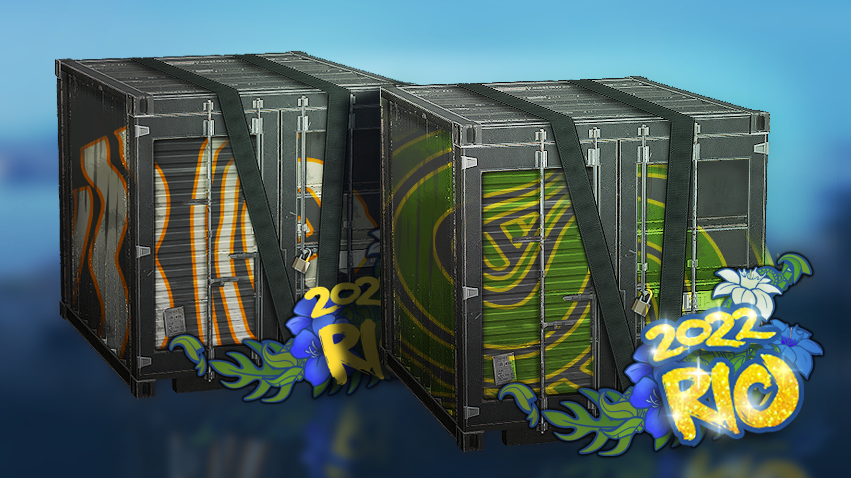 Today’s update includes several quality-of-life improvements for storage units, and a bunch of visual adjustments to Rio 2022 team and player stickers. Check them out and let us know what you think!

Looking for an easy way to complete your sticker collection while supporting all of the teams and players? Rio 2022 Storage Units are now available. Purchase your storage unit with Paper stickers and you’ll get a commemorative storage unit containing all 145 Paper tournament stickers–the IEM Rio 2022 sticker, every team logo, every autograph. If you’re in the mood for something with a little more sparkle, you can also pick up a storage unit filled with every Glitter sticker!

The first CS:GO Major in Brazil. Live audiences from start to finish. The IEM Rio Major starts October 31st, are you ready?

The IEM Rio Major is fast approaching, and you can show your support–team stickers, player autographs, and the Rio 2022 Viewer Pass are all available ...

[ MISC ]
– Improved Steam Input support for mouse and keyboard input on Steam Deck.
– Improved game startup I/O to reduce game launch time.
– Improved user interface flow when cycling through weapon case items in Agent View (thanks, @AquaIsMissing and @_ale_cs).
– Fixed an incorrect inventory limit warning shown to users with many items in Storage Units.
– Fixed an exploit that would allow the player’s camera to become detached from their eye position.

Anubis
– Added a hip cover on the plateau near B main.
– Clipped the large stone cover on CT mid for smoother movement.
– Added a scaffolding on A catwalk to prevent the boost through the window to T stair at the canal. (Thanks poseidonskiy rofls).
– Allowed players to silently drop down from A long.
– Fixed stones colliding with the tarp on A catwalk.
– Removed stone at A sewer.
– Aligned floating pillar on A with the floor.
– Removed left-over cl...

[ MISC ]
– Added a message on the main menu for players whose inventory is reaching full capacity.
– Awarded “10 Year Birthday Coin” items to players whose inventory was at full capacity and did not receive a drop during the birthday week.
– Users without Prime Account Status can only invite Steam friends to a party lobby.
– Users without Prime Account Status see a limited profile view when inspecting non-friend accounts.
– Blocked player avatars will now display one of a set of premade custom avatars instead of a no-avatar-outline.
– F... 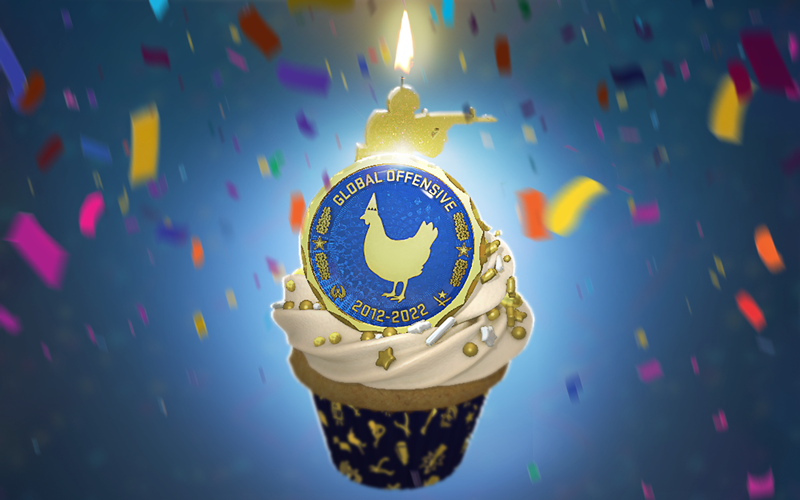 The community pulled together for the 10th anniversary sticker competition, and the results speak for themselves–the 10 Year Birthday Sticker Capsule contains over 60 community submitted designs, including an all new animated ‘Lenticular’ quality. Congratulations to the winners!

You’ve been patient, and it’s finally here. Tuscan is available in all game modes, so jump in to this classic map and put it through its paces! 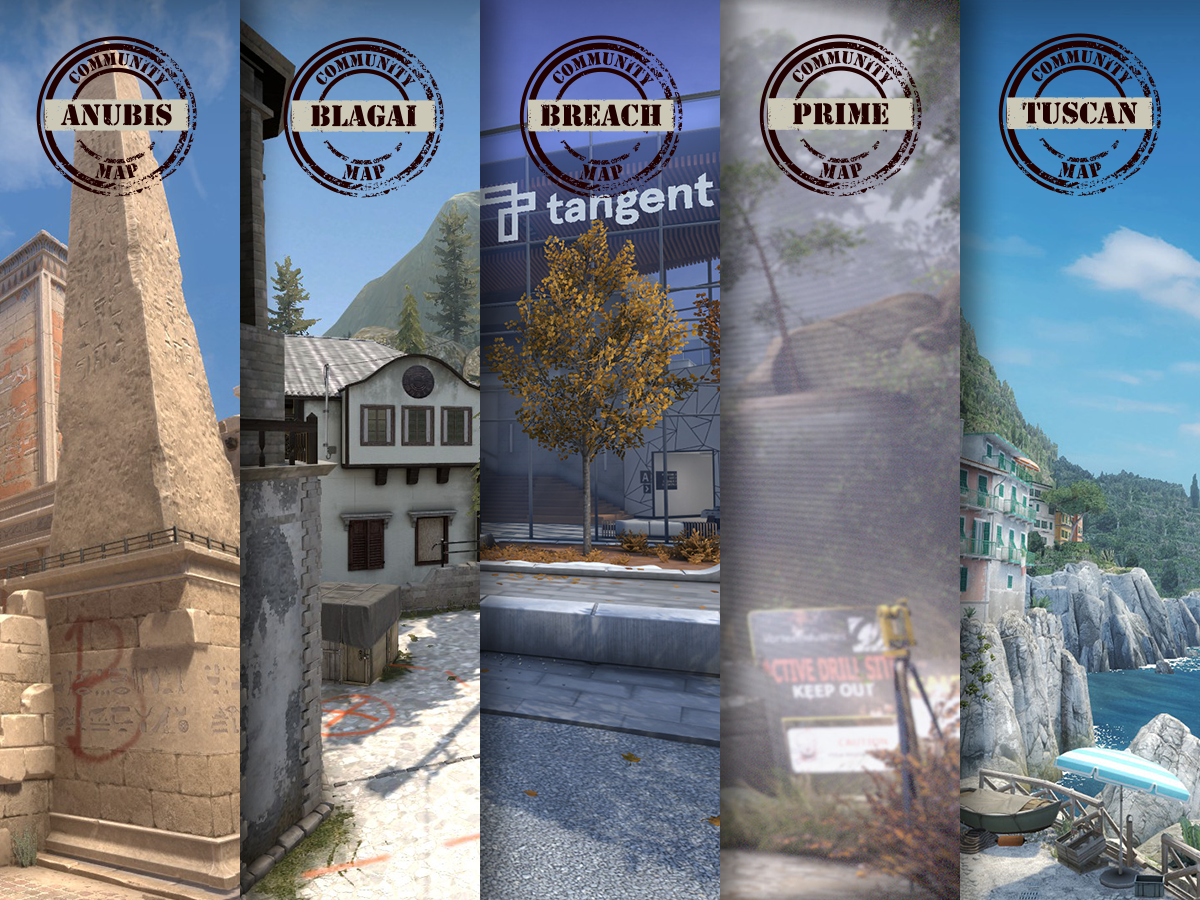 And that’s not all: we’ve brought back Anubis and Breach to competitive matchmaking, and added Primetime and Blagai to Wingman!

It wouldn’t be a birthday without some cake… specif...

[ MAPS ]
Ember
-Changes to Cannons:
–Altered the angle that the North cannon faces
–Cannons can now be aimed upwards, and is now 2x faster
–Now have 3 firing speeds (change with mouse2)
–Reduced inaccuracy multiplier
–Killfeed now shows weapon icon
–Produce a beefy screen shake and more particle effects
–Base model now also rotates
–Added damage falloff to cannonballs after their initial collision
–Fixed being able to bumpmine away from cannon and keep control
–Fixed cannons continuing to turn when no longer in use
-Added bus to bus stop o...

Typically when we ship changes to CS:GO’s matchmaking system, the adjustments are small enough that we don’t include them in our release notes. However, today’s update affects all CS:GO players so it requires some explanation.

So jump into a match, or two, or however many it takes for your next win!

Also, for those of you still interested, it’s the last week to purchase Antwerp 2022 Stickers–they are available in the store until August 8th.

[Steam Deck/Steam Input]
– Steam Deck now allows other game controllers to be connected via Steam Input. All connected controllers combine inputs. (You can play with Gyros Akimbo if you are very cool).
– “Combined Yaw & Roll” is the new default Gyro conversion on Steam Deck. All other controllers default to “Yaw”
– Radial menus (in particular, Quick Buy radials) no longer persist when dying.
– Some glyph fixes in Spectator mode.

[MAPS]
Ancient:
-Remove cratestack outside of “cave” location
-Fixed pixelgap from inside “cave” towards T mid
-Fixed ground clipping bugs in mid causing players to go slightly airborne
-Smoothed out ground outside of “cave” down towards B ramp
-Blocked archeological dig inside of “cave”
-Smoothed out corners in “donut” room
-Added additional cover near pillar on B
-Blocked one sidepath exit towards A site, widened remaining exit
-Fixed some visual glitches when looking out towards mid from “donut” room
-Reduced wallbang damage through scaffolding at B site
-Boosted light emitted from candles/lanterns

[ANTWERP 2022]
– Antwerp 2022 Champions Autograph Capsules are now available for purchase. 50% of the proceeds go to the participating players and organizations.

[ MISC ]
– Various Steam Input improvements.
– FlickStick tweaks – turning is dampened when joystick is returning to the deadzone.
– Fixes for silencer equip/unequip.
– Added Acceleration and Precision options for Gyro.
– Gyro Camera is now set up to use 1:1 world rotation to in game rotation as a foundation, as opposed to arbitrary units. This is calibrated around the assumption that the “Gyro Camera” binding in the Steam Input Configurator is set to maximum sensitivity (600) (New Official bindings have been updated to use this).
– Removed “Quick Buy” radials from default controller bindings.
– Fixed Steam Input “Health Shot” command.
– Added short fade-in for Radial Menus. This does not change/delay any underlying behavior. 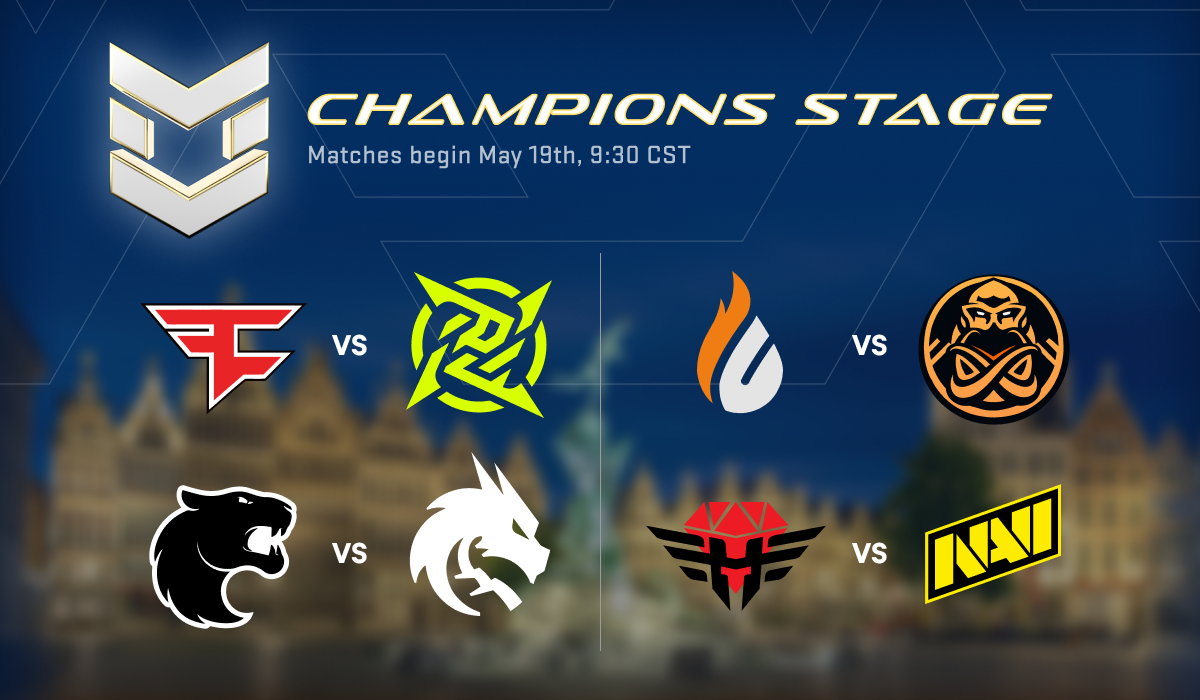 The Legends stage was a brutal test, but eight teams survived and earned their place on the main stage. Congratulations to Team Spirit, ENCE, Copenhagen Flames, FaZe, FURIA, Heroic, Natus Vincere, and Ninjas in Pyjamas. They’ll play out the rest of this event in front of the roaring crowds in Antwerp. Best of luck to all!

Matches start Thursday, so you still have a few hours to make your picks in the Pick’Em Challenge. Earn souvenir tokens (or purchase some more), and support for your favorite teams with team and player autograph stickers. 50% of the proceeds go to the players, teams, and organizations participating in the 2022 Antwerp Major.