19 days ago - /u/ - Direct link
A lil somethin somethin: You can find the details for this event on the announcement page here.
19 days ago - PDX_MordredViking - Direct link
Hello and welcome to the 4th Dev Diary for the upcoming Africa update. For this Dev Diary we return to the new content for 1.32; to be more precise, we will delve into the tropical Congo Basin. Afterwards we shall take a look at the Horn of Africa again to give you a status update of the region. Without any further ado, let’s get started!

We begin with a rather compact mission tree for Kongo. 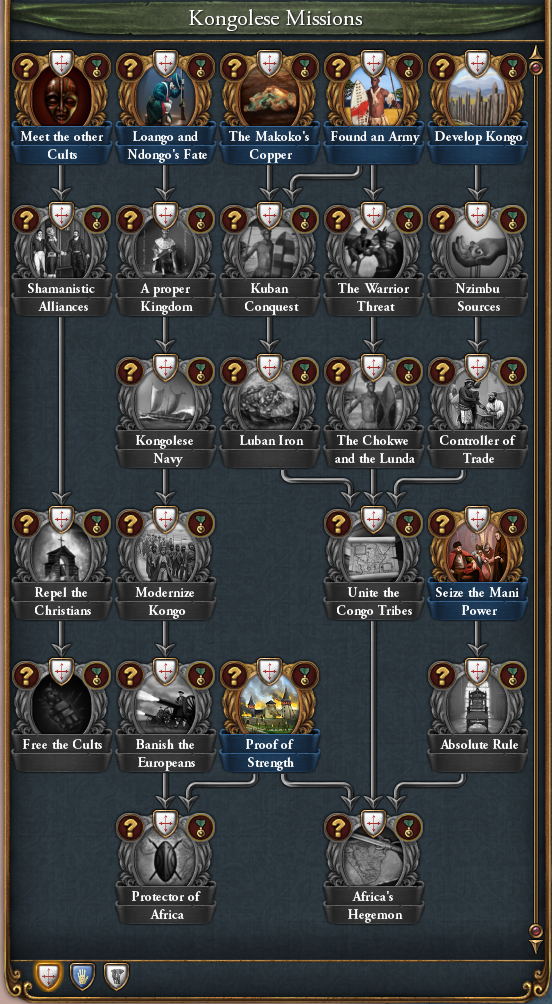 The mission tree is split into three parts, which lead into two endgame missions with strong rewards. The first three missions from the right are classic conquest missions to unify the Kongolese culture group. Highlights of these missions are the expansion into the Zambia area, a colony in Lega, and permanent claims on the East Africa region.

The second column from the left deals with the establishment into a proper kingdom and its relations with the Europeans, as they try to colonize Africa. The highlights here are +75 support for Feudalism in your capital from the mission “Loango and Ndongo’s Fate”, and permanent claims on all provinces in Africa, held by a country with its capital in Europe.

The first column handles the religious concerns of Kongo and is very orientated on Fetishism. Every single mission reward is designed around the Fetishist faith. Should you switch your country's religion, you will lose the modifiers from this column. Additionally, the column allows you to gain a little bit more out of the Fetishist faith.
The mission “Meet the other Cults” allows your heir to follow a weaker version of your unlocked cults.
The cult for an heir has however only 50% of the effect. As an example: Cwezi as your cult for your ruler would give you +20% Improve Relations. For your heir it would be only +10% Improve Relations, which is still considerable.
You will lose the cult modifier for your heir should they ascend to the throne or should they die.

The mission “Shamanistic Alliances” fires the following event for you: 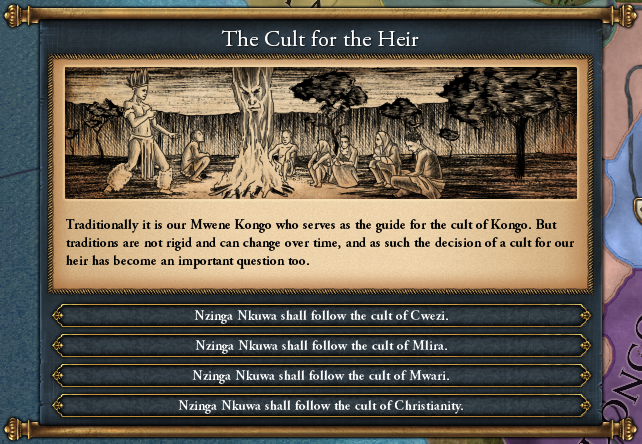 Your shaman can visit on your command a different cult and unlock them for your country. Hovering over any of the options will show a small tooltip telling you what the cult’s modifier is so you don’t have to look every single one of them up on the Wiki.
Cults from other religions are only available if you know of any country following this religion. Because of that you have the last option, which enables a decision to activate this decision later on again.
Also important to note: I think this is the first time we have a vanilla event with more than 6 options. You can scroll through the options using the scrollbar on the right side.

Speaking of religions for Kongo: The event for Christian missionaries reaching Kongo has received a facelift! 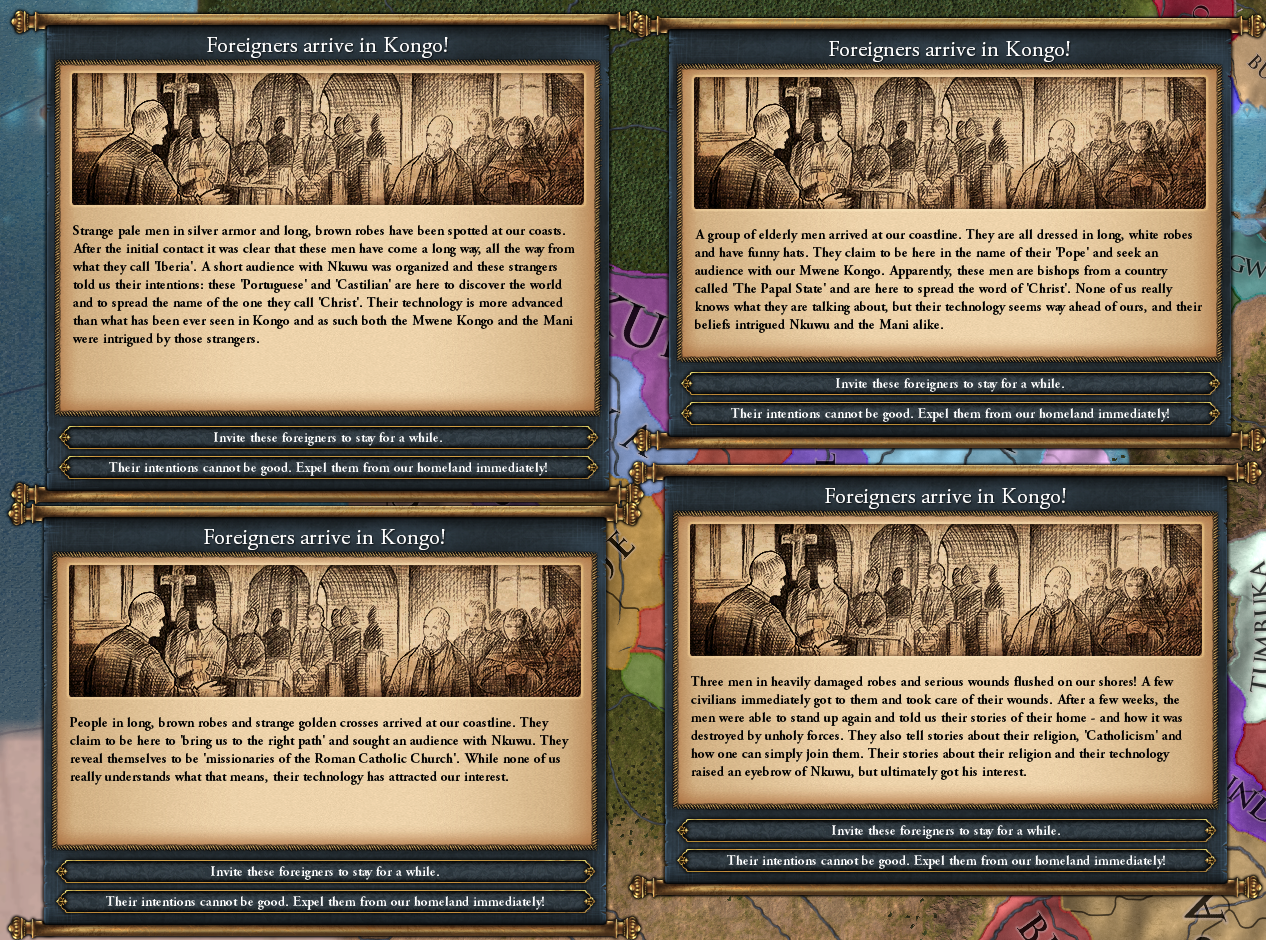 The event “Foreigners arrive in Kongo!” gets triggered as soon any European country discovers Kongo. Because it is not limited to Portugal only, it has four different descriptions for the cases that the Kongolese get visited by either the Iberians, the Pope, another Catholic country or, in fringe cases, by a non Catholic country.

What makes the event special however is that it affects your mission tree. By inviting the missionaries, you replace the first column of missions with Catholic missions at the cost of 1 stability and 20 Prestige. Also a random owned province becomes Catholic too.

The first mission requires you to convert your whole country to the Catholic faith. Because one of your provinces is already Catholic you could use rebels to do the job for you. Alternatively you can let the visiting missionaries do the job instead. After the event “Foreigners arrive in Kongo!” you will periodically get the following event if any Catholic country knows you, you are not Catholic, and you have not finished the mission “Repel the Christians”: 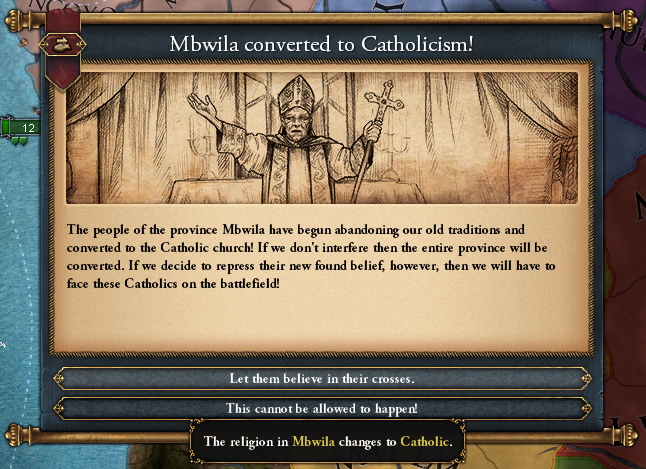 The event is a little bit special as the two options have a negative effect attached to them depending if you have chosen to become Catholic or to stay Fetishist.
Eventually your king will convert to Catholicism too if the dominant religion in your country is Catholic. 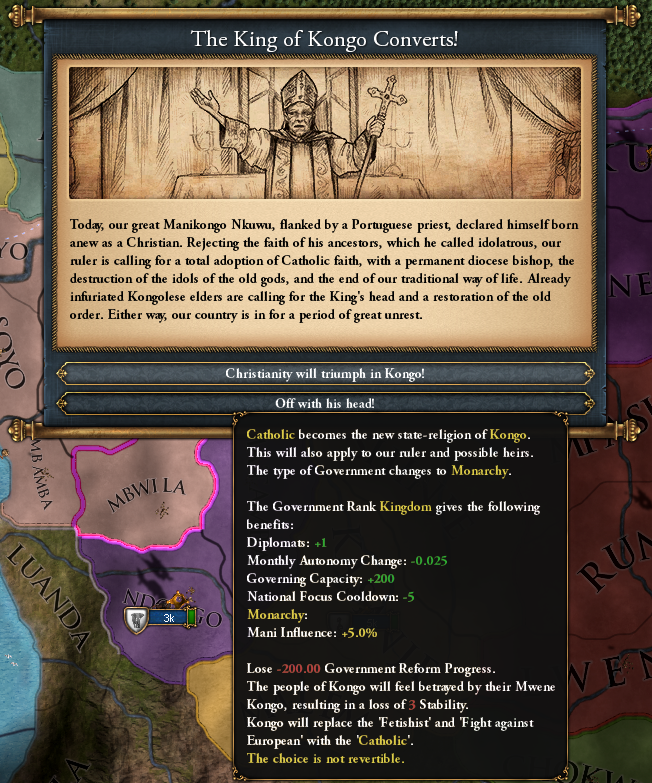 Both choices give you one last time to reconsider your religious decision you picked earlier. Both options can replace the missions again, but if you choose to do so you will lose 3 stability, so it is recommended that you pick the playstyle you want early on.

Highlights of the Catholic missions is the purchase of a cardinal from a European ally or from the Pope himself by completing the mission “Cardinal for Kongo”. Of course you will have to bribe the pope with 1000 Ducats, but the reward sure is worth the effort: 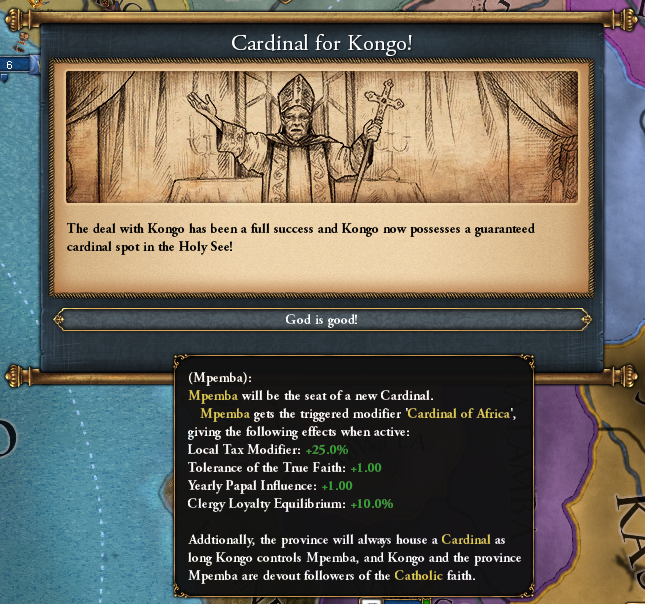 Also, while we are on the topic of Catholicism: there is another balance change for them, which is more fitting to the Catholics than -1 Tolerance to Heretics.

Finally a quick word regarding the final two missions and their rewards. “Protector of Africa” is quite simple as it “just” asks you to banish all the Europeans from Africa as well as having a really stable empire, giving you +10% Morale of Armies and Navies permanently.
The mission “Africa’s Hegemony”, which requires you to conquer great parts of Southern Africa, has a more unique mission reward. 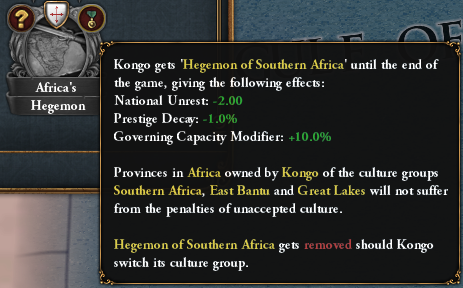 Before we finish the Dev Diary, let’s take a quick look back at the Horn of Africa as there are some new changes.
First thing: Adal has its own specific missions, though not as many as its neighbor Ethiopia. They should help AI Adal survive against Ethiopia better and expand into its Somalian neighbors.

Highlights of the missions are an early army modifier which decreases Land Maintenance by 5%, gives 0.5 Yearly Army Tradition and, if Adal is at war with Ethiopia, increases Morale by 5% and Manpower Recovery Speed by 10%.

Adal also received some ideas unique to them too. Though it is debatable whether they would help AI Adal survive as we want to avoid giving a strong military bonus right at the beginning. Still, Adal deserves its an own set of ideas:
ADA_ideas = {
start = {
land_maintenance_modifier = -0.1
trade_efficiency = 0.1
}

ada_embrace_the_cannons = {
artillery_power = 0.1
}
}
Next is the addition of a generic Horn of Africa idea set, which gives the five tags finally something better than +2.5% discipline:
horn_of_african_ideas = {
start = {
stability_cost_modifier = -0.1
global_tax_modifier = 0.1
}

Another change we made is addressing some setup issues. First we have changed the terrain in the Mogadishu and the Northern Swahili Coast area, changing four provinces from steppes and savannas to farmlands. 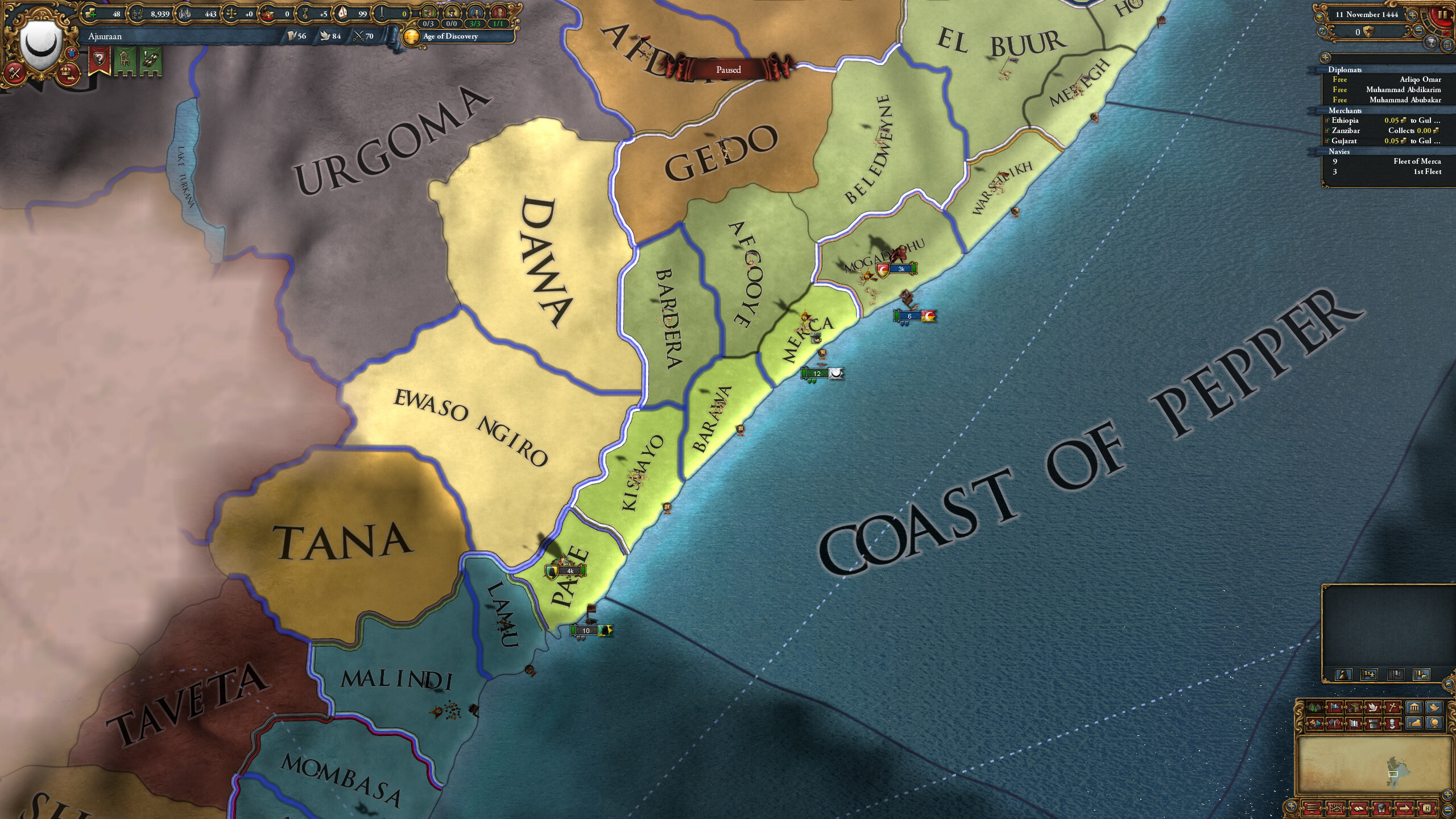 We also adjusted the climate of the region too. 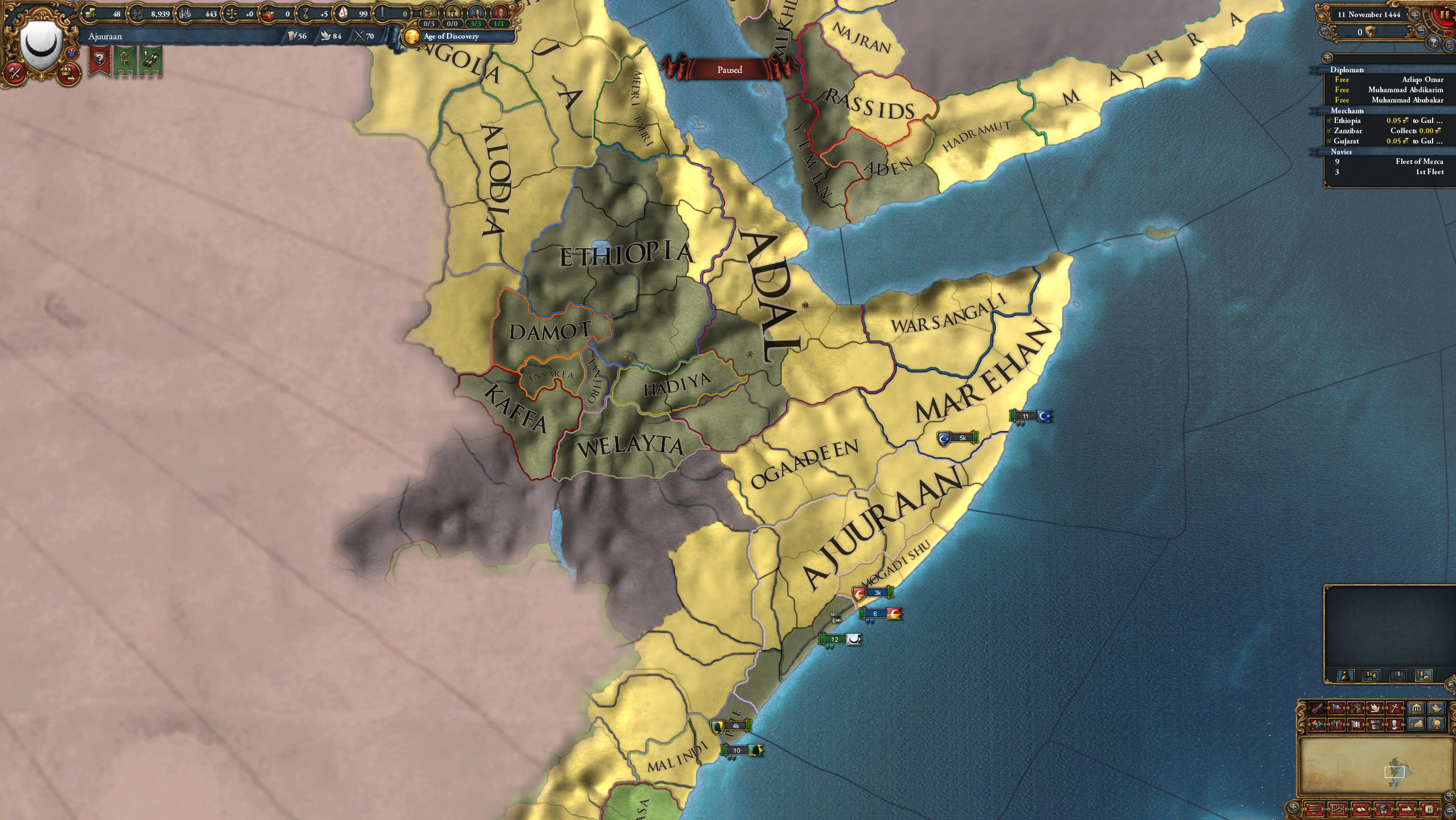 Finally a quick update regarding the Ç̌äwa unit: 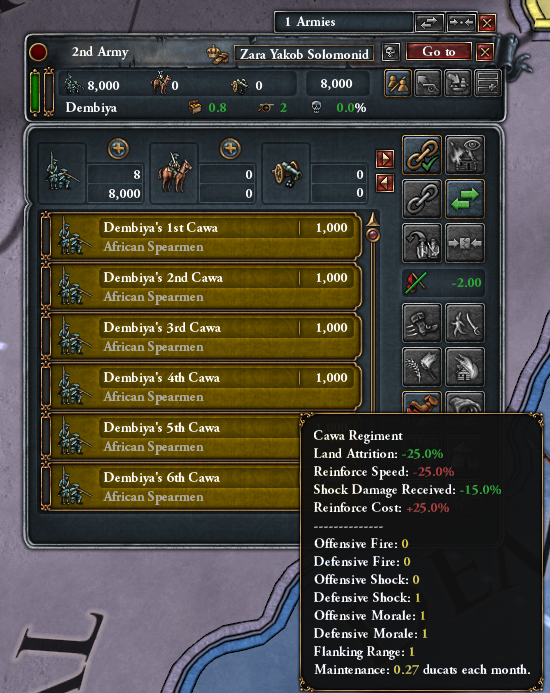 Additionally Ethiopia has access to two estate privileges, which modify the role of the Ç̌äwa even further:

Alright, that’s it for today! Next week Pavía will cover new monuments for 1.32. Have a nice week!
← More from Europa Universalis IV