As we approach Gems of War’s 8th anniversary, we have some exciting things planned for the game, and thought it would be great to share them with our community: the long-time battle-tested warriors, the enthusiastic new recruits, and all those in between.

The graphic below is a small window into our development schedule, showing our best guesses at when updates will release, as well as the names of some of the features in those updates, and the special events we have planned. It doesn’t go into too much detail (yet!), but as each update approaches, we‘ll release more sneak peeks of what’s to come.

Okay… This might just leave you wanting more, and the image below has names that are often a bit more about the theme of an update, rather than details of its contents, so here are a few extra hints about what to expect in version 6.3, Depths Below.

The Depths Below will feature some improvements to how we can interact with Delves in the Underworld, including some expansions for the Treasure Hoard, and plans for adding extra troops (and maps!) to existing factions. There’s more too, along with our continued overhaul and upgrade to the game’s UI.

So we hope that has whetted your appetites a little, and we can’t wait to share more with you in the coming months. 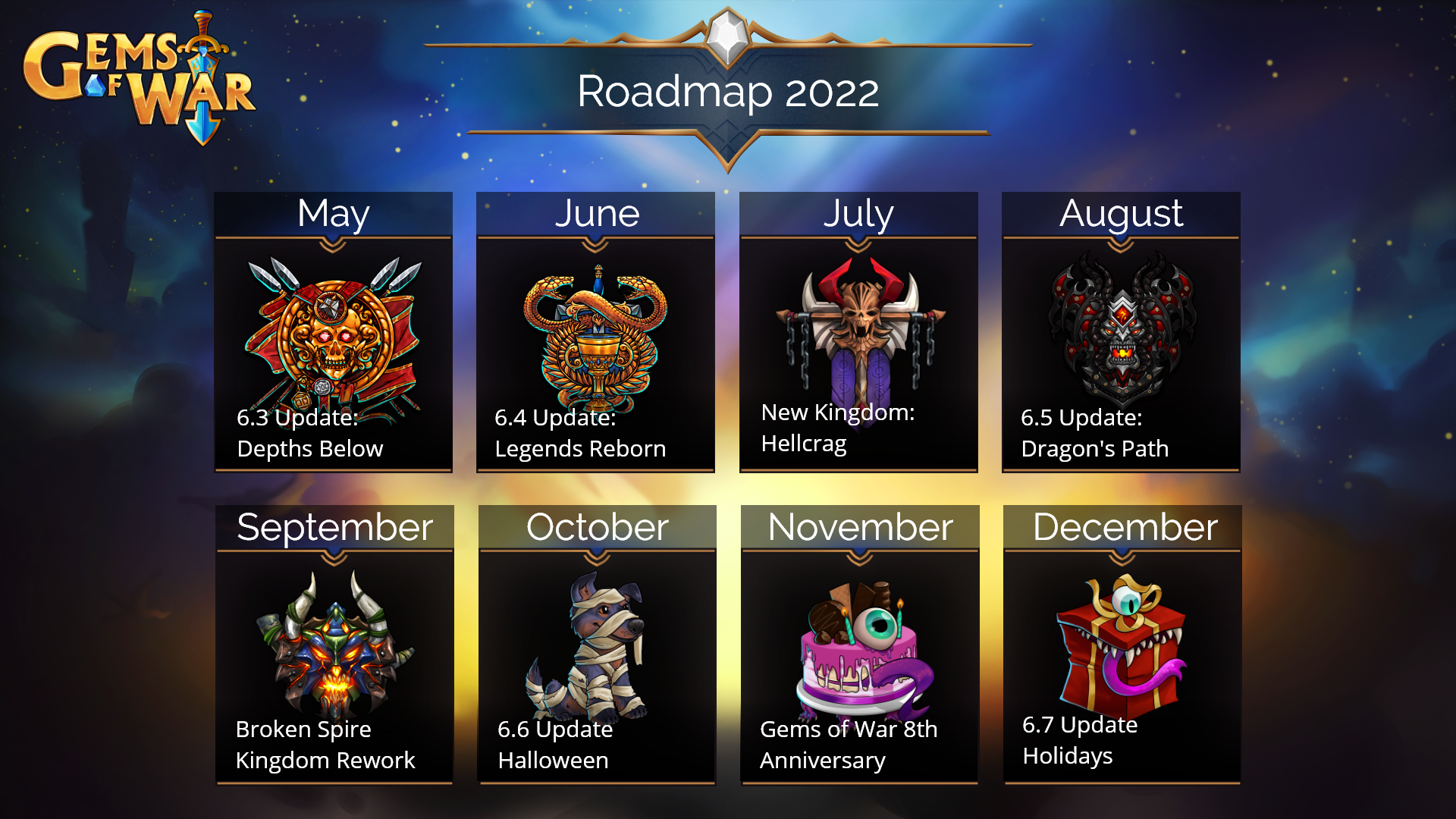 So excited to see everyone excited about this roadmap!

We are experimenting with announcements like these in future, potentially every 6 months or so!

We need to have a mix of bug fixing and introducing new content or people get bored and do stop playing.

Every update has bug fixing in the schedule.

We do our best to include all the bug fixes that we know are player facing in the patch notes.

The “other minor bug fixes and improvements” is sort of a catch all for any back end stuff we worked on or anything minor we missed from the patch notes.

However, I’ll pay special attention to the bug fixes section this time compared to usual to see if anything is missed and why.

We are reading all the feedback on the forum, but some of the comments piqued my interest so I laser focused down on them, long post about testing phases and GoW beta review incoming!

We are keeping a track of beta feedback and will review the beta again now that 6.3 is released.

Regarding this comment and others I’ve seen like it (so this answer isn’t specifically addressed at you Birdie! You just made a statement that encapsulates a statement I’ve seen posted several times now and in the past so it’s easy to quote!):

I don’t know of a situation where a major update feature has been removed or tweaked due to beta feedback.

Features will not be scrapped or have any major adjustments once the update is in beta testing.

“Beta testing is an opportunity for real users to use a product in a production environment to uncover any bugs or issues before a general release . Beta testing is the final round of testing before releasing a product to a wide audience.”

Once a game is in a beta or gold phase, the features are locked in and only minor tweaks and changes are made.

Beta feedback about the features themselves, while they may not be implemented before the release date, is taken into account and addressed in later updates where possible.

I know we have some software/game development wizzes in our community, but we also have a lot of people who haven’t seen much transparency in how the development cycle works behind the scene. If you’re interested in more information about testing, I’ve found this website to offer pretty good explanations about the different phases in software development. Just take it with a grain of salt as this website explains software development as a whole and generally, while game dev has some more specifics when you drill into this specialty area and also every company does things a little differently:

Alpha testing is an early alarm to identify the defects in software products and ensures the quality of product, unlike beta testing, testers performs the alpha testing.

Just a very high level general sweeping statement for game dev though is that while some games undergo alpha testing with end-users (players), generally the core concept of a game or major update is undergone internally to see if it’s fun, to see if it’s something people enjoy, and generally there are a miriad of examples out there to prove business models and return on investment. When we have a live service game then the community team are integral in communicating the players’ wants and needs and also in anticipating requests in the early stages before the players can actually comment on the live release for themselves. It’s also worth noting there is no perfect world where everyone is happy all the time with features and compromises have to be made regularly.

Maybe a very simple example of this sort of compromise is in game ads:

In addition to the above, it’s worth noting that as a live service game, if the programmers are working on ie update 10.1, then the team has in some capacity (designers, artists, Producers, CX, programmers, marketing, sound etc) already started working on updates 10.2 and 10.3. By the time you see update 10.1 on live the programmers, while making sure there’s no bugs that can be fixed in a hot fix and such, have already started working on 10.2. This train does not stop. So feedback garnered from beta 10.1 may be used in update 10.3 or… 10.5… or update 11 depending on the schedule and how extensive the work already scheduled and what’s being requested is. We do not have “down” or “casual” days. The game dev schedule is full. Always. If something different is added to that schedule, something else is delayed because we only have 24 hours in the day. If something different gets added to the schedule (for example right now we’re pushing that daily deal feedback to be implemented in some shape or form pretty hard), then obviously we all think it was worth it, but something else would get pushed out. Sometimes 3 smaller things are traded for 1 larger one and vice versa.

Regarding the beta program itself, we had discussions awhile ago about the value of the beta testing and what we all actually get out of it and we decided we needed to make major improvements to the way we run our community betas, and that process would be ongoing. So this is something that will be discussed again before the next beta starts. I can think of 3 key areas off the top of my head that need addressing in our betas:

My personal immediate focus at the moment (around everything else I do) is point 2: the communication loop and how we can improve or create processes to assist with this.

Just as a note, we are reading all the feedback posted here, this part of the conversation piqued my interest as a CX team member as the beta testing program falls under our umbrella as it’s a community initiative. Hopefully someone enjoys these brain dump posts and hearing about some of the behind the scenes stuff that goes on in game dev. If not, I will do my best to stop dumping them on you all haha

EDIT PS. This is my favourite gif to represent live service development

This is not Gems of War or IP2 specific. It’s all 10+ live service games I’ve worked on over the years, at different companies with budgets ranging in the multi millions to “cheap” games that only cost a couple hundred thousand.

Current example: Burning Ocularen not using its own Faction colors.

I’m following up on this on this one. I posted in the event thread or a bug report thread yesterday that I’m waiting for more information and I’ll follow up there.

Regardless, I know the team will be looking at how that happened and how it got through to production.

Also, I’ll talk to the team about adding more context around features in the patch notes.

I raised that there were questions about why autoplay, especially when players are asking for Daily Deals to be reviewed so I’m hoping we’ll be able to post more details about that specific decision soon!

about 1 month ago - OminousGMan - Direct link

Just providing a quick update here, unfortunately 6.4 has been delayed. This is due to us awaiting approval on the platforms to release it.

We have updated the Gems of War 2022 Roadmap at the top of this thread and added the image in this post to represent this and show how this has changed things going forward.

about 1 month ago - Kafka - Direct link