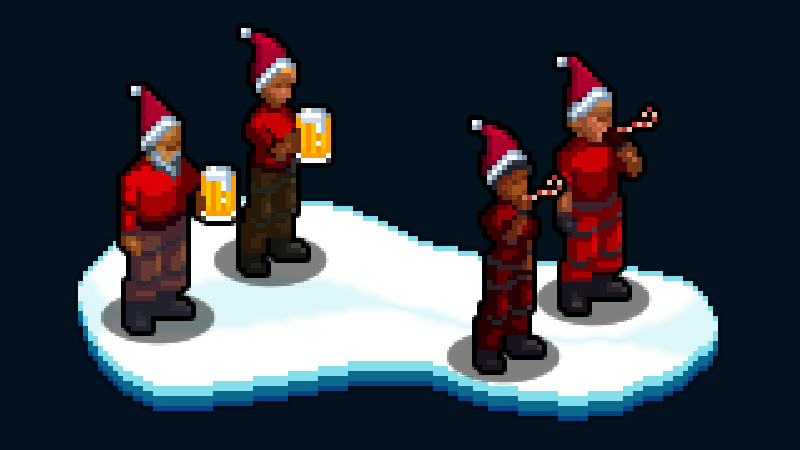 Season's Greetings, Spacefarer!
And thank you for this year. This year has been truly eventful and special. After 4 years of hard work our small 3 developer indie team was finally able to launch Space Haven into Early Access, but we never imagined it would be in such turbulent times. It has been quite the journey and we're extremely grateful for how it all has gone and excited to keep working on the game.

We wish you happy holidays, and hope every one of you get at least a moment to relax. It has been a special year for us here at Bugbyte, and we're looking forward to 2021 with new exciting updates to come. =)

Construction is for building and dismantling facilities.

Maintenance is for repairing and cleaning up.

Industry is all things related to producing, like the Recycler, Assembler etc.

I agree on both the points you mentioned - it did 'look' like it was disassembly and reassembly so I can understand there's nowhere to save that 'state' for either object (I'm a programmer too so I can see both sides).

Unless a particular objects state could be referenced on create as well as destroy, and some indication of 'object B was a move from object A, pass in object A's state as the initial state to object B'. I don't know. I don't know your code so it could be a right pain to do. :) I just know it'd be really nice to have. :D

Yeah true, it would indeed! =)

Just got this game and I love it. Rimworld in space. It's very addicting as confirmed by the time flying by once I started playing it.

Is there a 'suggestion box' for this game anywhere? :D

If the developer is able to read this, I'll share some things here for thought/discussion. Some things while playing this for a few hours that would go a long way to making things better (IMHO):

The Steam suggestions forums is pretty good since it has threads in a list:

Agree that it would sometimes be great to have the facility settings stored! However, storing the settings is a bit tricky. When a facility is moved it is essentially dismantled back to various crates. Nothing is stored in that process, as the player might cancel the blueprint and the crates are left to be used somewhere else.

Guess not impossible though! If the blueprint itself would store the settings from which it has been copied. =)

With the power nodes the problem is that sometimes moving also moves to power node out of link reach from the ones it was connected to.

Anyway, feel free to post also on the Steam forums in a thread if y...

This seems to affect some users on Steam, but it is rather rare. We don't know what causes it exactly, as we do not experience it ourselves. If we do find out and it can be fixed we will patch =)

In the meantime jumpy608's suggestion works to shut the game. Task manager and then right click on the spacehaven task and end it.

I just dismantled my jammer and was able to fire on the ship. Now I just have to see if there is a way of keeping it and turning it off.

The attack menu has a "stop charging" icon in the lower part of the attack menu tab. You can use that to disable it without having to dismantle.

The blue objective notifications will guide you step-by-step to a functional hyperspace capable ship. To get a good start to learn things:

Hi! Yeah I kind of figured it out, maybe a suggestion for future versions would be the ability to click those boxes and see what's in them, having to use the transfer window is kind of clunky. I only have a handful of hours so far, but this game is a lot of fun!

Indeed! Thanks for playing the game. =)

Once you have explored the derelict you can select it and open up the "transfer" tab. All resources lying on the derelict floor are shown there, and their amount!

We do strive to keep all stores updated at the same time!

Our full focus is on the PC/Mac/Linux versions and developing the game further. Other platforms are left for the future but we've kept them in mind throughout our development as much as we can.

Sorry, your post got hidden by the automoderator. However, we have seen it and thank you for your feedback! =)

Build 2 research labs and have 2 guys on it, or even 3. But 2 is more of a sweet spot with a lower amount of crew members as you can still do other things too. =)

Research modules consist of different research point tiers, even level 3 researchers will fail occasionally on an iteration but it always goes through eventually.